Henman On Draper: 'We'll See A Lot More From Him In The Future'

Jack Draper not only earned his first ATP Masters 1000 victory on Wednesday at the Miami Open presented by Itau, but he also received a stamp of approval from a fellow Briton who knows a thing or two about tennis success.

Former World No. 4 Tim Henman told ATPTour.com after the match that Draper, who defeated former World No. 6 Gilles Simon 7-5, 6-1, is “very good”. The 20-year-old is fourth in the ATP Race To Milan for a spot at the Intesa Sanpaolo Next Gen ATP Finals.

“He’s got weapons. He’s a lefty, he’s got a big serve, he’s got a really heavy forehand. He’s brought that physicality, he’s put on a lot of muscle mass, he’s a good athlete,” Henman said. “He’s adding elements to his game. It’s still early days, but as long as he stays healthy, we’ll see a lot more from him in the future.”

A year ago in Miami, Draper played an 82-minute first set against Mikhail Kukushkin. Then 19, he was forced to retire from the match due to heat. On Wednesday, the lefty had no such difficulties under the Florida sun.

“It’s been great to watch his progression,” Henman told ATPTour.com. “And obviously when you take into account where he was 12 months ago here, in similar conditions, and he was cooked after a set… to see him play against a class opponent and come out on top, both in tennis terms, but in physical terms [too], it’s good times.” 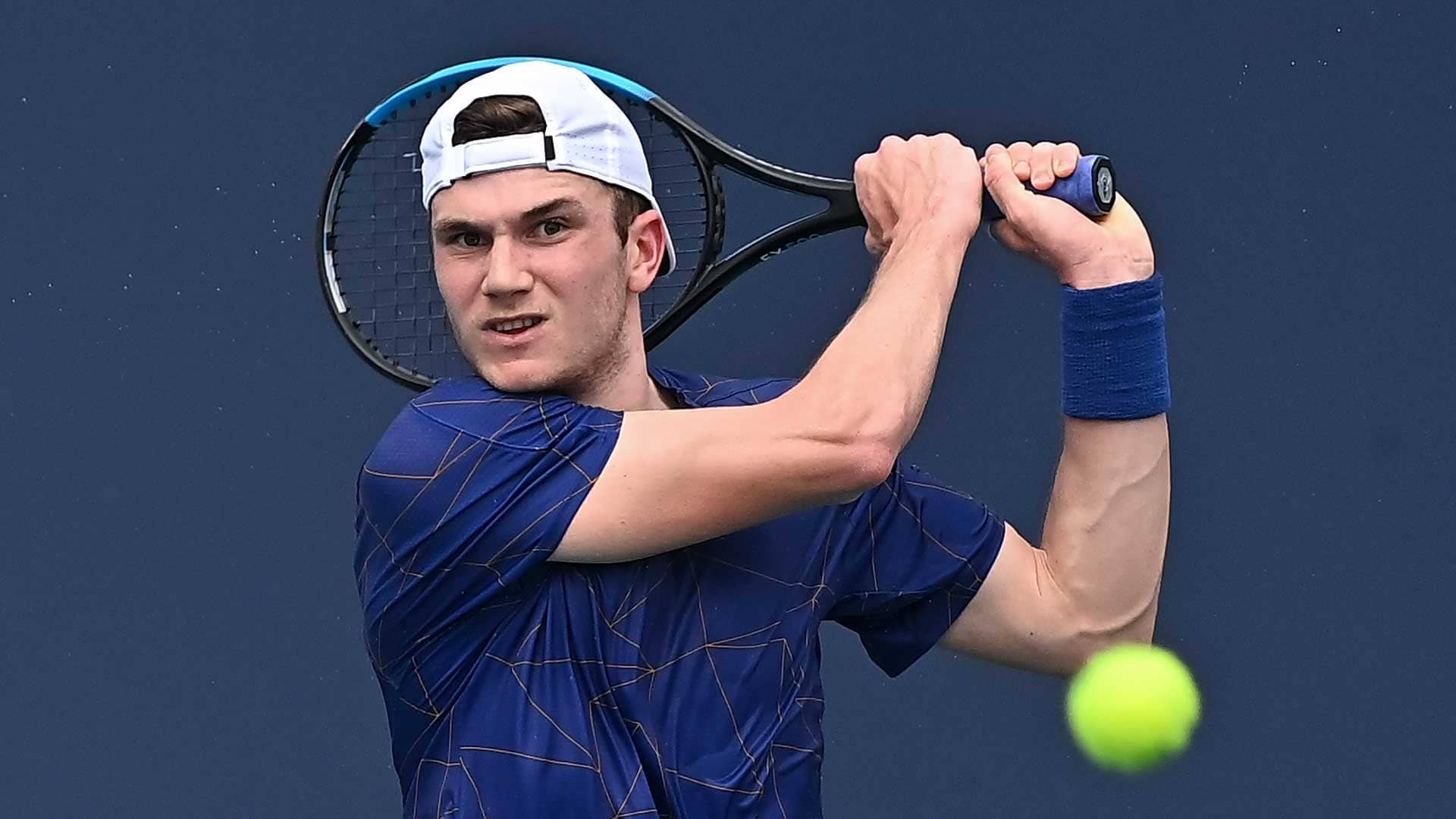 Photo Credit: Peter Staples/ATP Tour
Draper showed great maturity against a tricky player in Simon. Serving up a break at 4-3, 30/0, he played some loose points on the forehand side to give the break back. But as Henman said, “there was no panic”. The #NextGenATP star competed through the adversity and won nine of the match’s final 10 games.

“He’s always been a good competitor, and his game has been developing and to a certain extent it’s taken him a little bit of time for his physicality to catch up,” Henman said. “He’s had quite a few injuries, hasn’t really been able to build the momentum previously but this year it’s a different story.”

“I think people that understand the game know that the level of tennis at Challenger level is very high,” Henman said. “It’s not a big step up to the main Tour, and with all those wins he’s got a lot of confidence under his belt.”

Now Draper is on one of the sport’s biggest stages, proving he can compete against the world’s best. It is not the first time he has done so, though. Last year at the Cinch Championships, held at The Queen’s Club, he upset Jannik Sinner and Alexander Bublik. Then at Wimbledon, Draper won the first set against eventual champion Novak Djokovic before losing in four sets.

“I was there. Tough draw, wasn’t it?” Henman said. “But he embraced that challenge. He lost that day but to take a set off Djokovic, the first set he’s played on Centre Court at Wimbledon, he did himself proud and he would have learnt a lot. As I said, I think it won’t be long before he’s back out on Centre Court again.”

You May Also Like: Draper Downs Simon For Dream Miami Win

Next up in Miami for Draper will be fellow Briton Cameron Norrie, the man who defeated him at The Queen’s Club last year 6-3, 6-3. They are plenty familiar with each other despite Norrie being more than six years older.

“I've played a lot with Cam in the U.K. He's one of the guys who has been great with me as a young Brit. I think he's always supporting, always sending me messages,” Draper said. “Nice I get to share the court with him on Friday. When I played him at Queen's last year, I'm a lot better player than that I think. Hopefully I can give him a run for his money on Friday.”

No matter what happens in that match, Henman added that it’s important to remember a tennis career is a long journey. Draper is still at the start.

“It is [important]. It’s such a competitive environment, you’ve got to enjoy winning, but the reality in this sport is you lose a lot. It doesn’t matter who you are, you lose a lot,” Henman said. “You talk about at these types of events, there’s only one winner, there will be 95 or more losers in both the men’s and the women’s. So you’ve got to learn from that side of things, and I think that’s where he’s maturing and this is another important stepping stone for him, his first win at a Masters 1000, and it will be the first of many because he’s very good.”

Draper and Henman had a brief chat inside Hard Rock Stadium on Wednesday afternoon. Before that moment, ATPTour.com asked Henman what advice he would give the #NextGenATP player.

“There’s going to be a lot of bumps in the road,” Henman said. “But keep putting the work in, day in, day out, small improvements, and he’s going to have a good career.”