Lleyton Hewitt surrounded by his family Mia, Cruz, Ava and Bec at the International Tennis Hall Of Fame.

'The Hall Of Fame Seemed So Far Away': Emotional Hewitt Inducted In Newport

Andrew Eichenholz
This article contains:
Australian thanks family and friends who helped him along his journey

It has been an emotional weekend for Lleyton Hewitt. Surrounded by family and friends in Newport, the Australian has relived his growth from a boy with a dream in Adelaide to one of tennis’ greatest champions in recent memory. On Saturday evening, that culminated in his induction into the International Tennis Hall of Fame.

“The Hall of Fame seemed like something that was so far away from me ever being part of,” Hewitt said during the induction ceremony. “It was never something I ever thought about as a player, and it was always, I thought, for the people that were my idols growing up and the absolute legends of the sport.”

In a stirring induction speech, the 41-year-old took fans from around the world through his journey to the podium in Rhode Island. When Hewitt was a boy, his favourite sport was AFL football, which was played by members of his family, including his father, Glynn Hewitt.

But following a period of research, Hewitt’s parents found a tennis coach for their son in Peter Smith, who had a weekly slot available at 7:30 a.m. on Sunday mornings. “Rusty” never looked back.

One of the most important meetings of his life came as a teen, when he was introduced to Australian legend John Newcombe at his camp in Texas. Hewitt asked to interview Newcombe for a school project.

“The biggest thing he told me was about the famous Kipling poem ‘If’, and especially about the famous two lines that are written above the walkway out on Centre Court at Wimbledon,” Hewitt said. “If you can meet with triumph and disaster and treat those two imposters just the same.”

You May Also Like: 'The Hall Of Fame Seemed So Far Away': Emotional Hewitt Inducted In Newport

No matter the hurdle Hewitt faced or the high he celebrated, the Australian gave his all. Regardless of the challenge, he tried his best to meet and exceed it.

Before Roger Federer, Rafael Nadal and Novak Djokovic ascended to the top of the sport, Hewitt held top spot for 80 weeks, good for 10th-most in history. Even when those stars made their mark, “Rusty” scratched and clawed, proving he would never back down.

“I feel fortunate that I was able to play across different generations,” Hewitt said. “I was able to be on the same court as my heroes that I looked up to, like Andre Agassi and Pete Sampras, and then go on and compete against three of the greatest tennis players our sport has ever seen in Roger Federer, Rafael Nadal and Novak Djokovic.”

Hewitt was introduced by Australian legends Newcombe and Tony Roche, the latter of whom flew across the world to join his mentee for a special weekend.

“The first meeting I had with Lleyton was at a charity event in Adelaide,” Roche said. “He must have been 12 or 13. I was even impressed with his game at that early age. I was more impressed with his mullet haircut really. All the Adelaide kids seemed to have these great mullet haircuts. But Lleyton, you could tell, was going to be something special.” 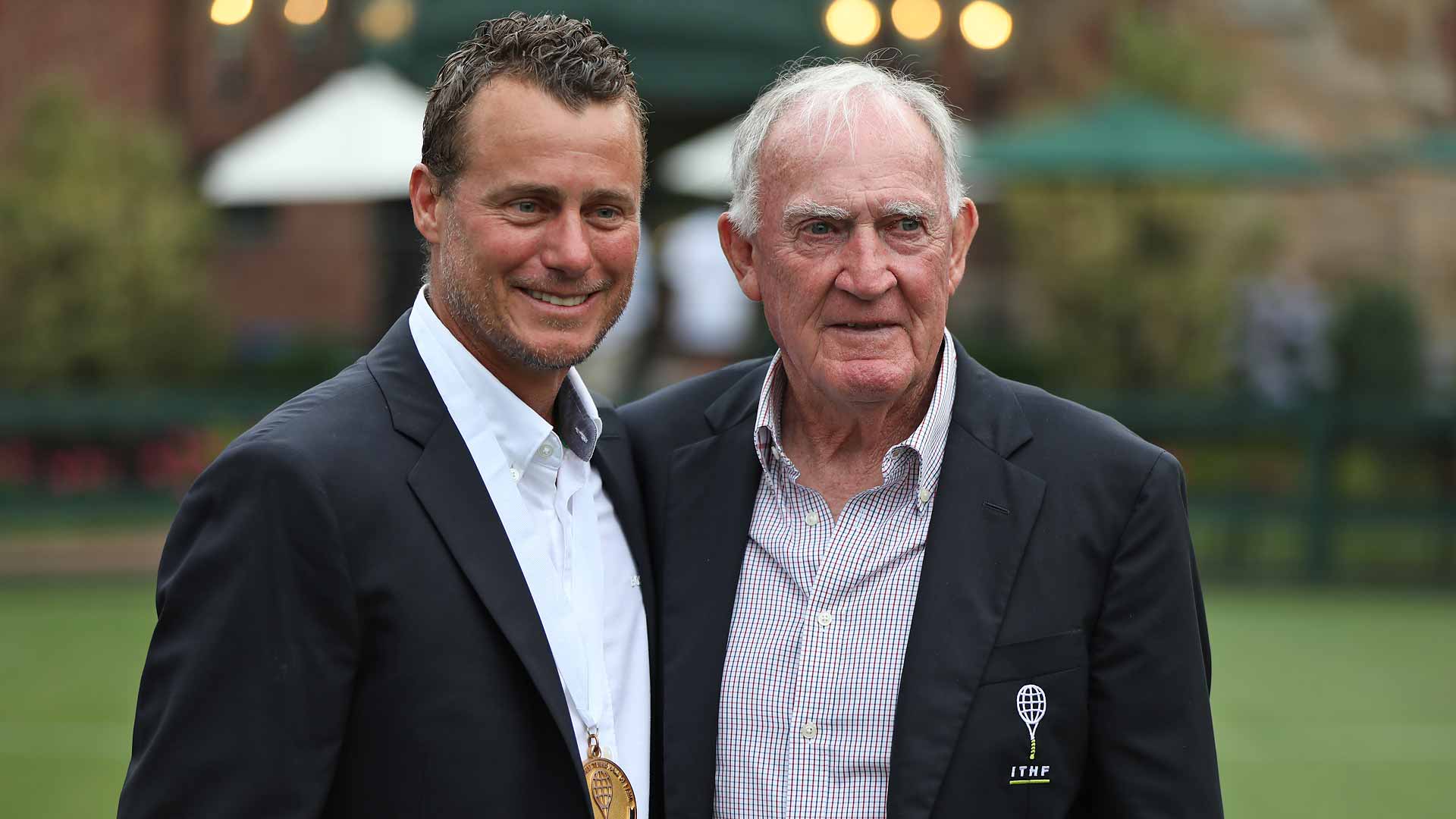 Hewitt poses with Roche after the induction ceremony. Photo Credit: Andrew Eichenholz/ATP Tour
The 41-year-old was most emotional when he spoke to his family and friends who were in the crowd, especially his wife, Bec, and three children Mia, Cruz and Ava.

“It was such a special time,” Hewitt said. “I loved travelling as a little family around the world and being on that adventure together.”

Hewitt is a member of the Class of 2021, but his induction was delayed due to the Covid-19 pandemic. He still remembers when Stan Smith called to tell him of his nomination,

“It was a funny moment because, as Stan said, I was actually at an under 12s junior tennis tournament in the middle of nowhere in Pakenham near Melbourne watching my son playing a junior tournament,” Hewitt said. “I had to ask Stan if he could hold on a minute so I could walk away from the court to have a chat so no one could hear what we were talking about. After that phone call, that's when it really started to sink in that this is a pretty special thing.”

In a way, this moment has been nearly a decade in the works. Hewitt claimed his final ATP Tour singles title at the International Tennis Hall of Fame in 2014 and also lifted the doubles trophy with close friend Sam Groth. Eight years later and just a minute’s walk away, Hewitt delivered his remarks to an eager crowd on the Newport lawns.

“I just want to thank all the past Hall of Famers for being here this weekend. It wouldn't be the same if you guys weren't here and I didn't have people to look up to that had done it before me, as well,” Hewitt said. “It's been an unbelievable experience for me, the whole buildup the last couple of years, but especially this weekend. I think it's so fitting for me to be inducted here in Newport at such a special place.”