Steve Johnson advances to the Houston final for a second straight year.

For just the second time in the past 15 years, the Fayez Sarofim & Co. U.S. Men’s Clay Court Championship will feature an all-American final. Tennessee native Tennys Sandgren will clash with California's Steve Johnson for the title, after both battled through tricky semi-final encounters on Saturday.

Johnson and Sandgren are slated to meet for the first time at the tour-level, marking the first championship clash in Houston between home hopefuls since 2015, when Jack Sock defeated Sam Querrey. That year, Sock lifted his maiden ATP World Tour trophy and Sandgren will look to do the same on Sunday.

The 26-year-old toppled Ivo Karlovic 7-6(2), 7-6(4) in one hour and 38 minutes, surviving an offensive onslaught from the big-hitting Croatian. Karlovic fired 35 winners and 10 aces in total, while claiming 83 per cent of first serve points, but the defensive-minded Sandgren grinded to victory on the red dirt.

"I didn't feel like I could get to the final this week. I was just trying to win a few matches," said Sandgren. "But I put myself in that position."

You May Also Like: Edmund Moves Into Maiden Final

In front of friends and family at the River Oaks Country Club, Sandgren surged into his first ATP World Tour final. What a difference a year makes. Exactly one year ago, the American qualified for his first tour-level main draw in Houston and now he is one step from lifting his first trophy. Projected to rise to a career-high inside the Top 50 of the ATP Rankings regardless of Sunday's outcome, the he is on a tear since progressing from the ATP Challenger Tour to open the season. A quarter-finalist at the Australian Open in January, he has carried the momentum into Houston and will look to become the third American winner of the year (Tiafoe in Delray Beach; Isner in Miami).

Few players can say they have rallied from a break down against Karlovic and his imposing serve, but Sandgren did just that to take the opener. A sublime lob snatched the break back and he would take the first set on an unreturned serve. Sandgren would once again escape the Croatian's grasp in the second set, forcing another tie-break after sliding into a full split to fire a cross-court pass at 5-6. And he would grab the initiative with the set - and match - on the line, emerging victorious after more than an hour and a half.

"I feel like I'm better at engaging myself when things don't go right," Sandgren added. "I don't have a lot of experience at this stage and against [Karlovic's serve], you just guess. You can only take a stab at it and guess. I tried to read where he liked to go. And the second set was difficult. I double faulted three times in a row to get broken back. The wind was swirling and he likes to run around and hit big forehands. One double fault became two and then it was three."

In Saturday's second semi-final, Steve Johnson overcame a stern test from #NextGenATP star Taylor Fritz to move into his second straight final in the Texas metropolis. The defending champion advanced 7-5, 6-7(4), 6-2 in two hours and 22 minutes, converting four of 15 break chances.

Johnson is seeking to become the first player to go back-to-back in Houston since Andy Roddick in 2001-02, when the tournament first moved to River Oaks Country Club. It will be his fourth ATP World Tour title match, having finished runner-up in Vienna in 2015, followed by victories on the grass of Nottingham and clay here last year.

"I'm happy to be back in the final," said Johnson. "This court has a lot of special memories for me. I'm happy to be in another final and get a title tomorrow. It was windy and gusty today and the shadows were moving in. I was able to find the break early in the third and that made the big difference."

With two match points while returning at 6-5 15/40 in the second set, Johnson was on the verge of shutting the door in straights. But his 20-year-old counterpart would not go down quietly, fighting to force a tie-break and eventually a decider. Momentum was squarely on Fritz's shoulders, but Johnson's experience saw him across the finish line, grabbing a pair of breaks in the third set to return to the championship match.

Following the match, Johnson was presented with the tournament's sportsmanship award. The Langston Trophy is annually awarded to the player(s) who demonstrate great sportsmanship during the competition. This year’s award goes to a group of players -- Johnson, John Isner, Sam Querrey, Frances Tiafoe and Bob & Mike Bryan -- who participated in kids clinics at Sunnyside Park this week after donating money to support the resurfacing of the park’s courts following Hurricane Harvey. 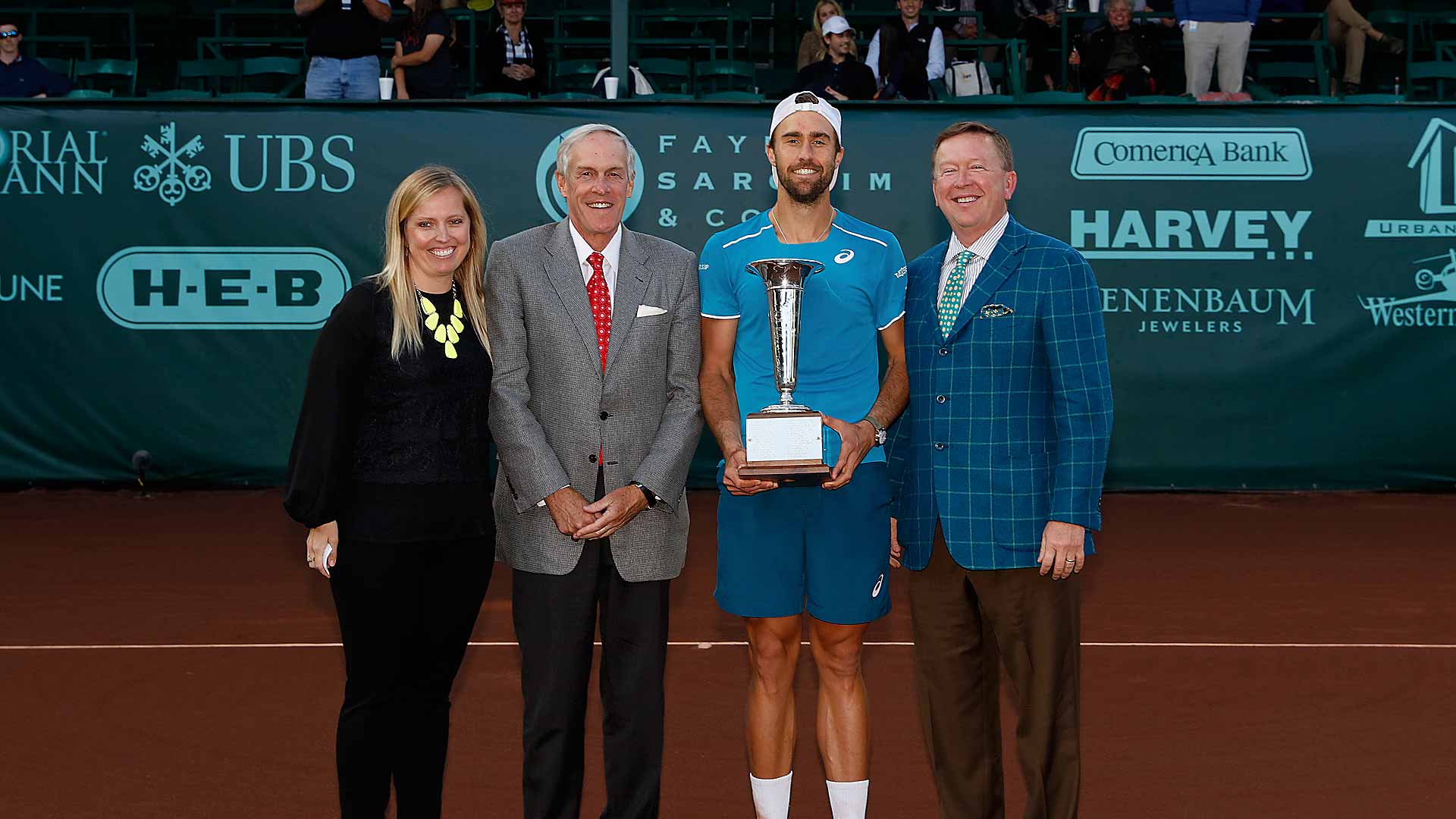 Did You Know?
In two previous encounters, on the ITF Futures circuit in 2009 and ATP Challenger Tour event in Savannah in 2013, Sandgren prevailed in three sets both times. He will bid to join the honour roll of American champions in Houston and become the eighth winner at River Oaks (Andy Roddick, Andre Agassi, Mardy Fish, Ryan Sweeting, John Isner, Sock and Johnson).