This time last year, Hubert Hurkacz had not played at an ATP Tour event.

Andrew Eichenholz
This article contains:
Prior to 2019, Hurkacz had never won an ATP Masters 1000 match

Hubert Hurkacz earned another big win in ATP Masters 1000 action this season as he knocked out 2018 finalist and fourth seed Stefanos Tsitsipas on Wednesday at the Coupe Rogers in Montreal. During the March Masters, Hurkacz ousted Kei Nishikori en route to the BNP Paribas Open quarter-finals and followed with an upset win over Indian Wells champion Dominic Thiem in Miami.

Polish No. 1 Hubert Hurkacz is one of the quieter players on the ATP Tour. Everyone ‘Hubi’ comes across, he greets extremely politely with a smile. Overall, he’s simply a good guy. But while the 22-year-old is quiet, his game is speaking loudly for him.

Entering the BNP Paribas Open, Hurkacz had never won an ATP Masters 1000 match. Not only did he reach the quarter-finals — including three victories against Top 30 opponents — but he is now into the third round in Miami after stunning Indian Wells champion Dominic Thiem.

“It’s great. I’m just trying to enjoy every moment,” said Hurkacz, who qualified for the 2018 Next Gen ATP Finals. “To be able to play that match against Dominic was really special for me. He’s an unbelievable player, so I needed to play at a top level. It happened, and I’m very happy with that.”

Hurkacz began working with a new coach Craig Boynton (also with Steve Johnson) at Indian Wells. The veteran mentor says that it’s his charge’s competitive spirit that has stood out with his success.

“He’s not afraid to win, and that’s a very, very appealing quality. He wants to win, he’s very competitive, he’s a fighter, he’s very resilient. He doesn’t usually let bad moments linger too long,” Boynton said. “Those are all the things that as a coach you look for in wanting to work with. You take that piece of it and he’s a really good tennis player, put those two together and now it’s just filling in the blanks, making everything a little bit better and I’m just excited to get out on the tournament courts with him and see how the Tour’s going to react to playing him.”

The World No. 54’s competitive spirit has been on full display this month. In the California desert, he battled through three-setters against Australian Open semi-finalist Lucas Pouille, Japanese superstar Kei Nishikori and #NextGenATP Canadian Denis Shapovalov.

Hurkacz, who also defeated Nishikori in Dubai, has won both of his FedEx ATP Head2Head meetings against the World No. 6 in three sets. Nishikori is 129-44 in tour-level deciding sets (75%), meaning that nearly five per cent of his losses in matches that have gone the distance have come against Hurkacz.

“That was his competitive spirit there. That was him rising to the occasion that got him out of those situations. It wasn’t like all of a sudden there was a big on-off switch on off and here we go now you’re good, now you go,” Boynton said. “He’s had to fight through and come back and be down and out against some really, really good players to get to where he is now.” 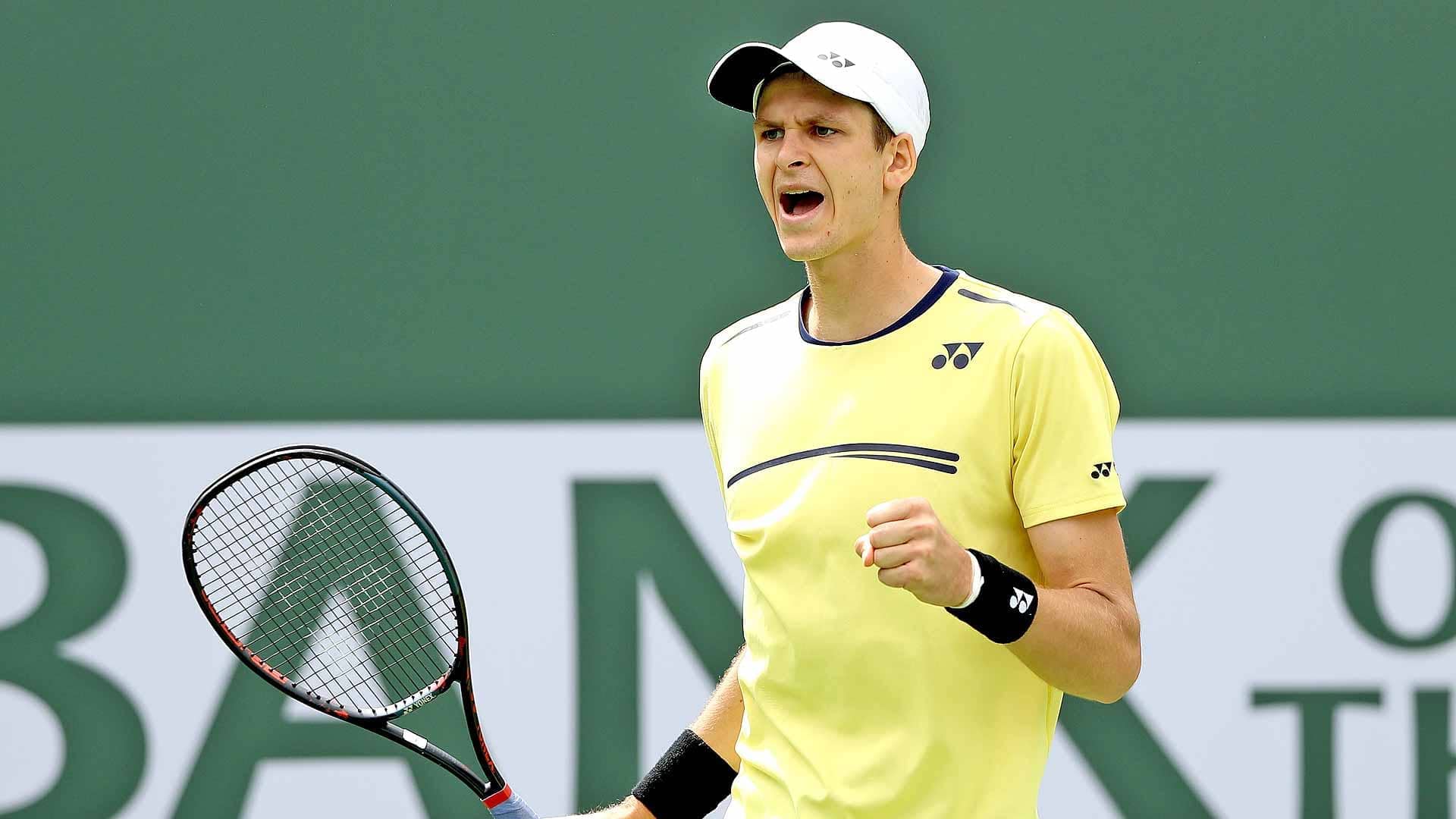 While Hurkacz is quiet off the court, you can visibly see his determination on it. In a way, his competitiveness is not all that different from Boynton’s other player, Johnson, who is known for his battling spirit.

“He is very energetic. He’s very positive. He does a lot of fist pumping,” Boynton said. “He’s not as boisterous as Stevie can be, but he’s within the same positive, let’s rip your heart out, this assassin — if you will — type of energy. They both really want to win.”

Hurkacz stands 6’5”, has a strong first serve, and the Pole said that his backhand was the key to his victory against Thiem.

“I think if you take a look at him, people have said he kind of mirrors Andy Murray a little bit with a similar routine on returns, a little bit of a similar backhand,” Boynton said. “He’s a little taller than Andy. Andy’s movement was phenomenal. But Hubi’s a very good athlete, too.”

Hurkacz is still new to the ATP Tour. Entering the week of Indian Wells last year, he was outside the Top 200 of the ATP Rankings and had never played a match at an ATP Tour event. So while he has proven he can compete on the biggest stages against some of the best players in the sport, there is still plenty to learn.

“We’ve been working on him being present for every point. He’s learning a lot of different concepts, so it’s really for him to avoid the mental letdowns. If he has his ‘A’ game every single point, what a nightmare he’s going to be to deal with,” Boynton said. “You’re going to have to beat him three times to beat him instead of beating him twice. It’s about eliminating those down times and having him locked in for every point and with a purpose for every point.”

Hurkacz will look to continue his surge against another emerging player in #NextGenATP Canadian Felix Auger-Aliassime on Sunday. He’ll look to speak loudly with his game once again.

“He’s doing recently amazing results. I wish him all the best, because he’s a really great guy,” Hurkacz said. “[But] I’m trying to focus on my game. He’s obviously a great player, a great fighter, so it’s going to be a good level.”