Craig O'Shannessy
This article contains:
An Infosys ATP Beyond The Numbers analysis examines patterns focussed on zoning in on the backhand

It begins with the return of serve and gets more fervent as baseline skirmishes unfold. An Infosys ATP Beyond The Numbers analysis of 20 matches featuring Roger Federer from the 2018 and 2019 seasons identifies how both the Swiss star and his opponents focus their energy on stalking the backhand.

This analysis focusses on how often Federer and his opponents target the Ad-court third of the court, prowling their opponent’s backhand wing.

Return Of Serve = Straight To The Backhand
Roger Federer’s backhand-focussed strategy is immediately recognisable once the court is dissected into thirds. Federer’s primary target to direct returns is to the Ad-court third, where he hit 46 per cent of all returns. His opponents’ primary location was returning down the middle of the court (44%), which gave Federer more opportunities to hit a preferred Serve +1 forehand. Federer’s record in the 20 matches was 14 wins, six losses.

What also becomes apparent is how Federer and his opponents avoid the Deuce-court third when returning, which is straight to their opponent’s forehand. Federer hit only 14 per cent of his returns there, while his opponent’s were in the same ballpark at 17 per cent. The match that Federer hit most to the Ad-court third was a 2018 three-set Miami Open presented by Itau victory against Radu Albot. The Hawk-Eye graphic below identifies that only three first-serve returns went to Albot’s forehand in the Deuce-court third. 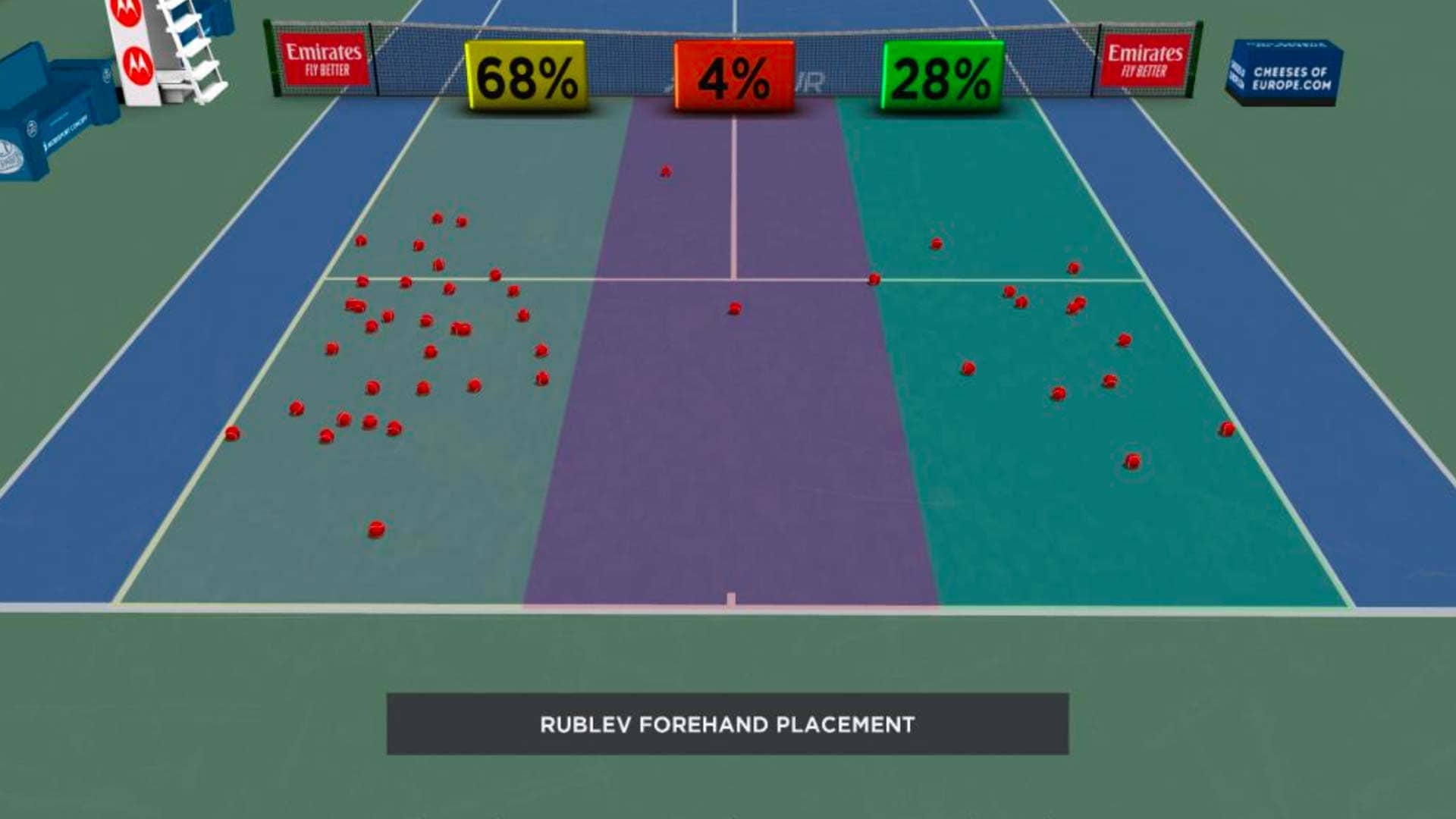 Rally Backhands
The match metrics identify that Federer’s opponents clearly wanted to get into backhand-to-backhand exchanges with the Swiss, while Federer was more likely to try and escape the Ad-court pattern by redirecting backhands down the line. Federer’s opponents hit 55 per cent of their backhands cross court, while Federer was considerably lower at 47 per cent. Federer did change direction with his backhand 29 per cent of the time and went down the line, which was higher than the 24 per cent from his opponents.

When Federer lost 3-6, 7-6(11), 6-4 to Dominic Thiem in Madrid in 2019, he was doing all he could to avoid backhand-to-backhand exchanges with the Austrian. Federer hit 45 per cent of his backhands down the line, while Thiem’s backhand down the line total only reached 18 per cent of total backhands.

Overall in these 20 matches, 54 per cent of baseline rally shots were forehands and 46 per cent were backhands. The average forehand rally speed was 72 mph, while backhands were just 64 mph - an eight mph difference. The big picture summary clearly identifies the forehand as the apex baseline predator that cleverly targets the backhand as its prey.