In the first of a new series of first-person essays on ATPTour.com, top American John Isner opens up about the toughest moments of his life: When his mother, Karen, was diagnosed with colon cancer.

Editor's Note: ATPTour.com is resurfacing features to bring fans closer to their favourite players. This story was originally published on 11 April 2018.

Looking back on it, it was weird that I hadn't heard from Mom in a few days. We usually talked every day, sometimes more, even if I was busy with tennis and classes at the University of Georgia.

It was February 2004, and I was in the second semester of my freshman year. We were beginning our spring tennis season, my game was in a good place, and we had just finished another weekend of matches. Life was good.

But when I woke up at around 8 a.m. in my McWhorter Hall dorm room to two missed calls, I thought something was definitely up. Maybe something had happened to one of my grandparents? Maybe, but surely nothing to Mom, not to the woman who had survived raising my two older brothers and me. Besides, she was in good health – she played tennis, lifted weights, ran – and she was only 50.

I was alone when I called her back.

“I'm going to tell you something but I don't want you to worry. It's going to be OK,” she said.

“But there's a reason why I haven't spoken to you the last few days.

Cancer, at that point in my life – I was 18, two months away from my 19th birthday – had been something I had read about in the news or something, unfortunately, that had happened to relatives or parents of friends. It wasn't something that I had personally experienced.

But by the time I talked with my mom, cancer had already affected my family. She hadn't called because she had been rushed into emergency surgery. Mom had been so ill – deathly sick, really – that she had gone to the hospital for what she had thought was appendicitis. She woke up to learn that she had “stage four” – very developed – colon cancer. A tumour had formed, and they had to remove it, immediately.

She didn't tell me during the weekend because she wanted me to focus on my matches. We talked for a few minutes. She told me about her upcoming chemotherapy and her brutal path ahead.

Less than six weeks earlier, I had been at home, celebrating Christmas with my family. Everyone was healthy, everything was perfect. Now I thought I was going to lose my mom.

I had actually wanted to get away from my parents. When I was deciding which college to attend, I picked Georgia because, No. 1, it was the right place for me and the tennis program was – and remains – incredible, but also because the university was perfectly located.

I wanted to leave North Carolina, where I had grown up, but I didn't want to leave the South. The University of Georgia, about four hours away from my parents' home in Greensboro, North Carolina, was the best of everything: easy enough to drive home to if I needed to but far enough away that my parents couldn't come visit every weekend. Funny, isn't it?

Because as I drove home on 106 North and then I-85 North, speeding past forests coming to life and two-stoplight towns in the South, I wanted to be nowhere else but home, in Greensboro, with my family.

We had shared so many ridiculous times at home. I remember my two older brothers – Nathan and Jordan – and I would eat so much food that my parents eventually bought a second refrigerator and put it in the laundry room. But we were eating that food so rapidly as well that my mom put a combination lock on the extra fridge.

My brothers and I, however, were smart kids. One time, one of us slyly peered over Mom's shoulder as she entered the combination, and we again had reins to both refrigerators, until she noticed the attrition and changed the lock. 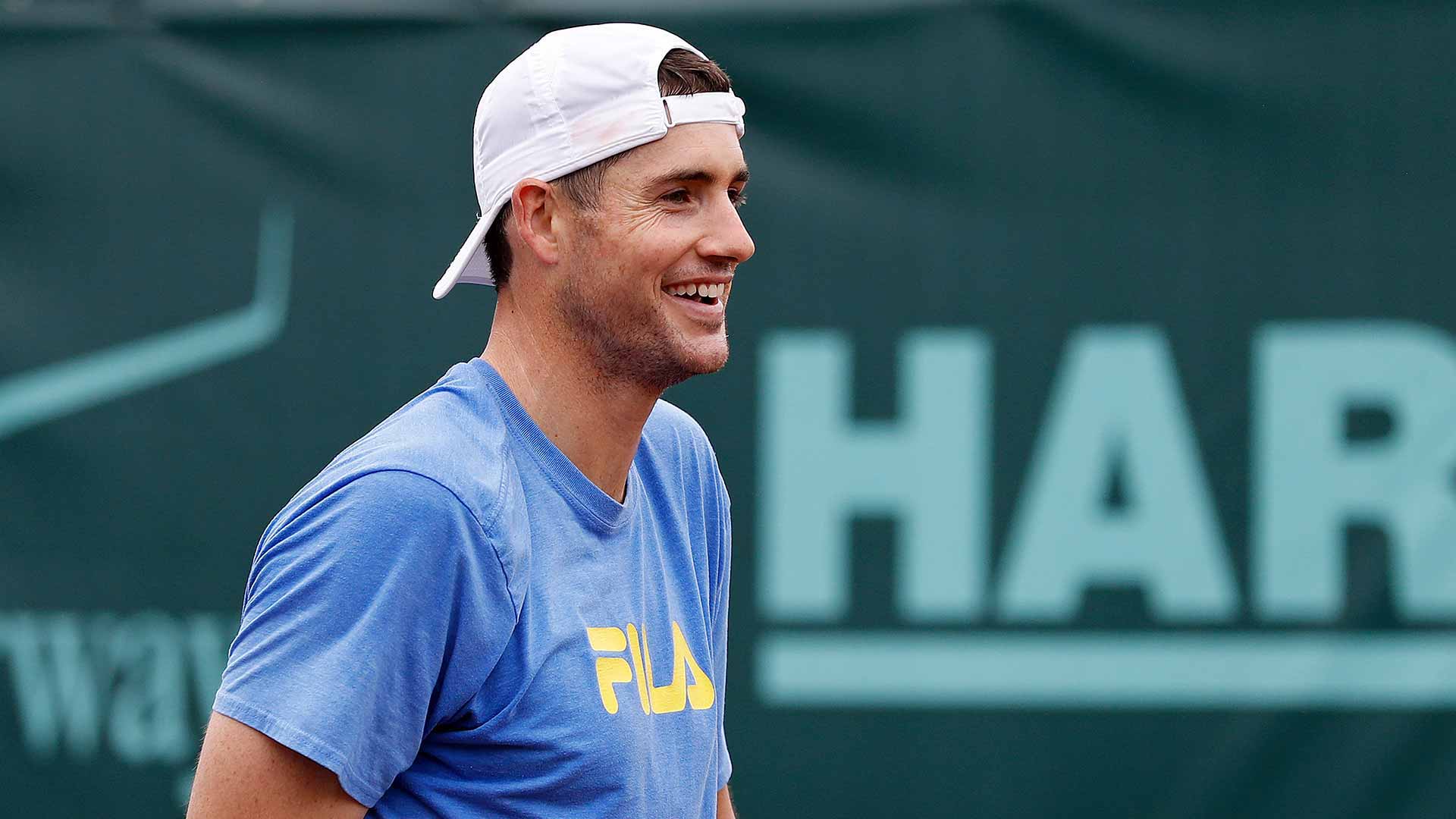 John Isner has gained perspective from his mother's battle with colon cancer. (Credit: Aaron Sprecher/US Clay)
We ate so much, a cheeseburger counted as a snack. But we were good eaters, too: Every year my mom would plant a huge vegetable garden in the backyard, and we'd devour carrots and tomatoes.

We got into our share of trouble as well. One time, when I was maybe 7 or 8, my oldest brother Nathan took a “U” bicycle lock, shoved my head through it and locked me to his brass bed post. He left me there for a few hours until my mom came home and found me.

She was also the person waiting for me after Nathan would make me walk the three miles from the tennis courts to our house after I'd beaten him. He'd get so mad, he'd just take off – and this was before cell phones, so I couldn't call or text someone for a ride.

But I knew this trip home would be a lot different. My usual road-trip music – CDs of The Allman Brothers Band, Creedence Clearwater Revival, The Doobie Brothers – wouldn't cut it; I spent most of the next four hours on the phone, talking with family.

Mom had six months of chemotherapy waiting for her. On Monday through Wednesday, she'd sit for hours with a tube connected to her as the medicine seeped into her veins. Every other week, she'd go back.

But she never went alone. Someone – either myself, my dad, my aunt or uncle, or my brothers – would go with her, holding her hand or just trying to talk to her about anything else.

She'd feel OK for the first day or two after a session, but then she'd feel awful for days. Nauseated. Vomiting. She didn't want to leave her bed. I'd call and ask how she was doing, “Oh, I'm fine,” she'd say. But then, later, I'd talk with my dad, who would tell me the truth.

My first trip back, right after I heard the news, I stayed for about a week, but then I returned to Georgia. I hated leaving my family, but, to be honest, it was easy to go back and keep playing tennis.

That was the one thing my mom wanted me to do – to keep playing – and because of that, I felt like, in some small way, I was able to do something for her.

She was right there with me, too: Mom came to every home tennis match that spring. She'd go to chemotherapy in the beginning of the week, drive down with my dad on Friday and, in between sleeping all weekend, she'd watch tennis.

I went home every couple of weeks during that spring season. Usually I headed back on a Monday, after a weekend of matches, and I'd come back to Athens on Wednesday. My coach, Manny Diaz, and my professors were so understanding. The tennis team secretary, who knew about my mom's health, even baked me a cake on my birthday, 26 April.

The six months of chemotherapy had removed the cancer. Mom was in the clear, so we thought.

But she still came in for checkups so they could test her blood, and every time we learned she was OK, until October 2007, when doctors noticed something abnormal in her blood. The cancer had returned.

This time, however, we took her to the University of North Carolina Lineberger in Chapel Hill, and they started treating it even more aggressively. Doctors there attacked it with 28 radiation treatments and constant chemotherapy. For about six weeks, Mom carried around a chemotherapy bag so that the drugs could constantly be infused in her.

It worked. The tumour shrunk, and they surgically removed it. The rounds of checkups began again, but this time, they happened less frequently and less frequently until, finally, my mom didn't have to go back at all. 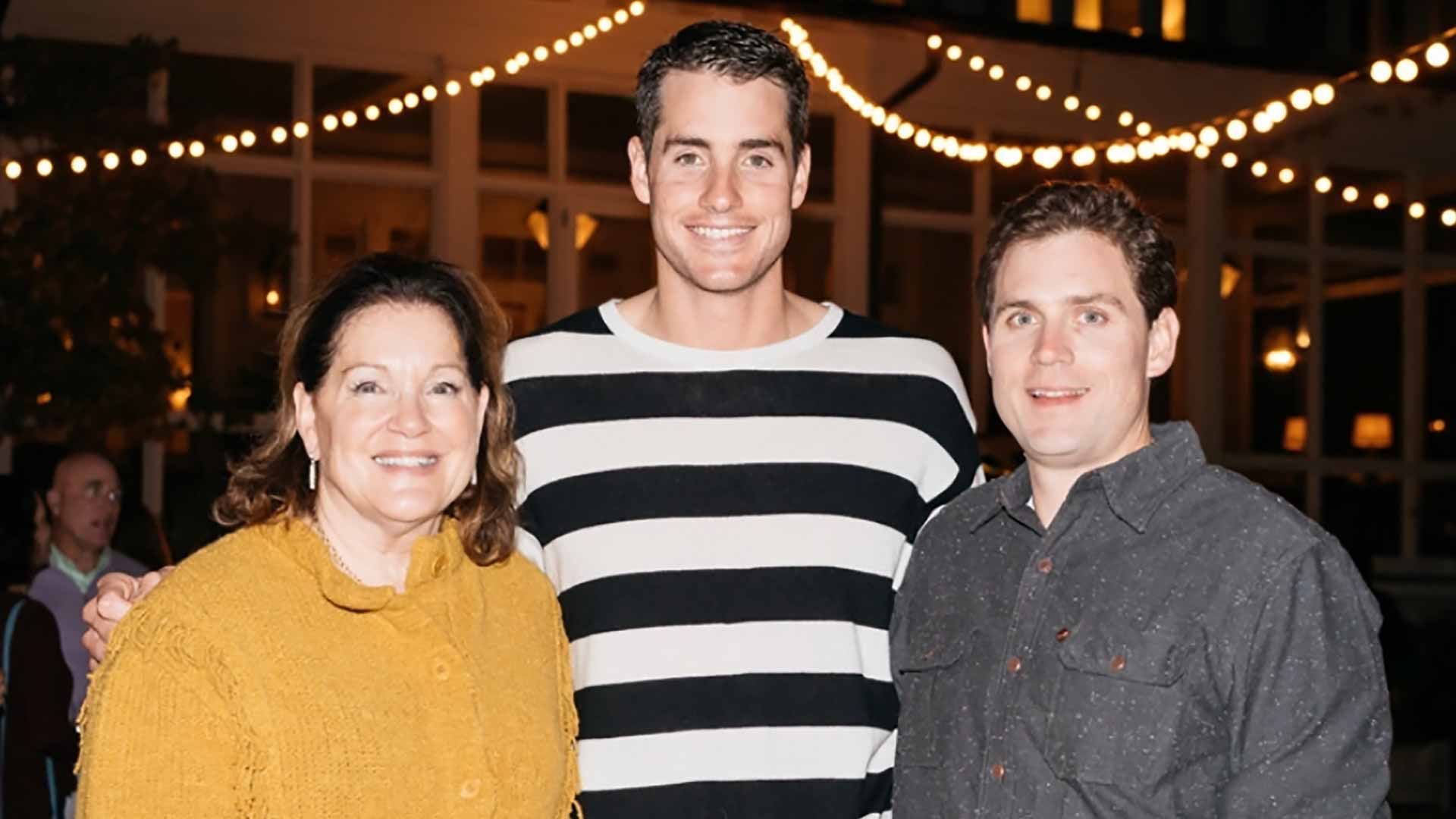 Isner, center, remains close with his entire family, including his mother, to his left, and his brother Nathan, to his right.
She and my dad could come watch me play whenever they wanted, and they have. They've seen me in Indian Wells, Miami, New York, Cincinnati, Winston-Salem and Atlanta. Anywhere they can drive, they usually go.

During my 12-year ATP World Tour career, I've been lucky enough to play a lot of intense matches. But I've never experienced anything like the pain my mom had to endure.

What I felt when it was 68-68 against Nicolas Mahut at 2010 Wimbledon? Doesn't compare. The exhaustion I had during the first set of the Miami Open final against Alexander Zverev, before I won my first ATP World Tour Masters 1000 title? Not even close.

My mom is also why we've raised more than $200,000 for UNC Lineberger during charity exhibitions. This year we're raffling off a chance to come to Wimbledon, with proceeds benefiting the hospital, where the doctors saved my mom's life and save lives every day.

When I think about whining about the heat or about what time I'm scheduled to play, one thought about the courage Mom has shown over the years places everything in perspective.

I'm one of the lucky ones. I play a game for a living, and, whether she's at home or in the stands, I have the support of my mom.