ATP Staff
This article contains:
This is the 36-year-old's 16th ATP Tour trophy

John Isner served fellow American Brandon Nakashima 21 aces and a dose of revenge on Sunday evening. One week after losing against his #NextGenATP countryman in the Los Cabos semi-finals, Isner beat Nakashima 7-6(8), 7-5 to win his sixth Truist Atlanta Open title.

"This tournament has meant everything for my career," Isner said in his on-court interview. "It's absolutely amazing."

Isner earned four championship points on Nakashima's serve at 5-4 in the second set. In a flash, it was his opponent who had two chances to break and serve for a third set. But the six-time champion held his nerve and earned the lone service break of the match at 6-5 to triumph on Stadium Court after one hour and 56 minutes.

Last week at the Mifel Open, Nakashima beat Isner 7-5, 6-4 to reach his first ATP Tour final. Although he fell short against Cameron Norrie, the 19-year-old had another opportunity to become the youngest American champion on the ATP Tour since 19-year-old Andy Roddick in Houston 19 years ago. But instead, Isner rode his serve to his 16th tour-level crown.

Much like their Los Cabos duel, this clash was dominated by the serve. But this time, while Nakashima had his opportunities, Isner was more consistent in the biggest moments. The World No. 35 saved two set points in the first set and surged late in the second to level the pair’s ATP Head2Head series at 1-1. 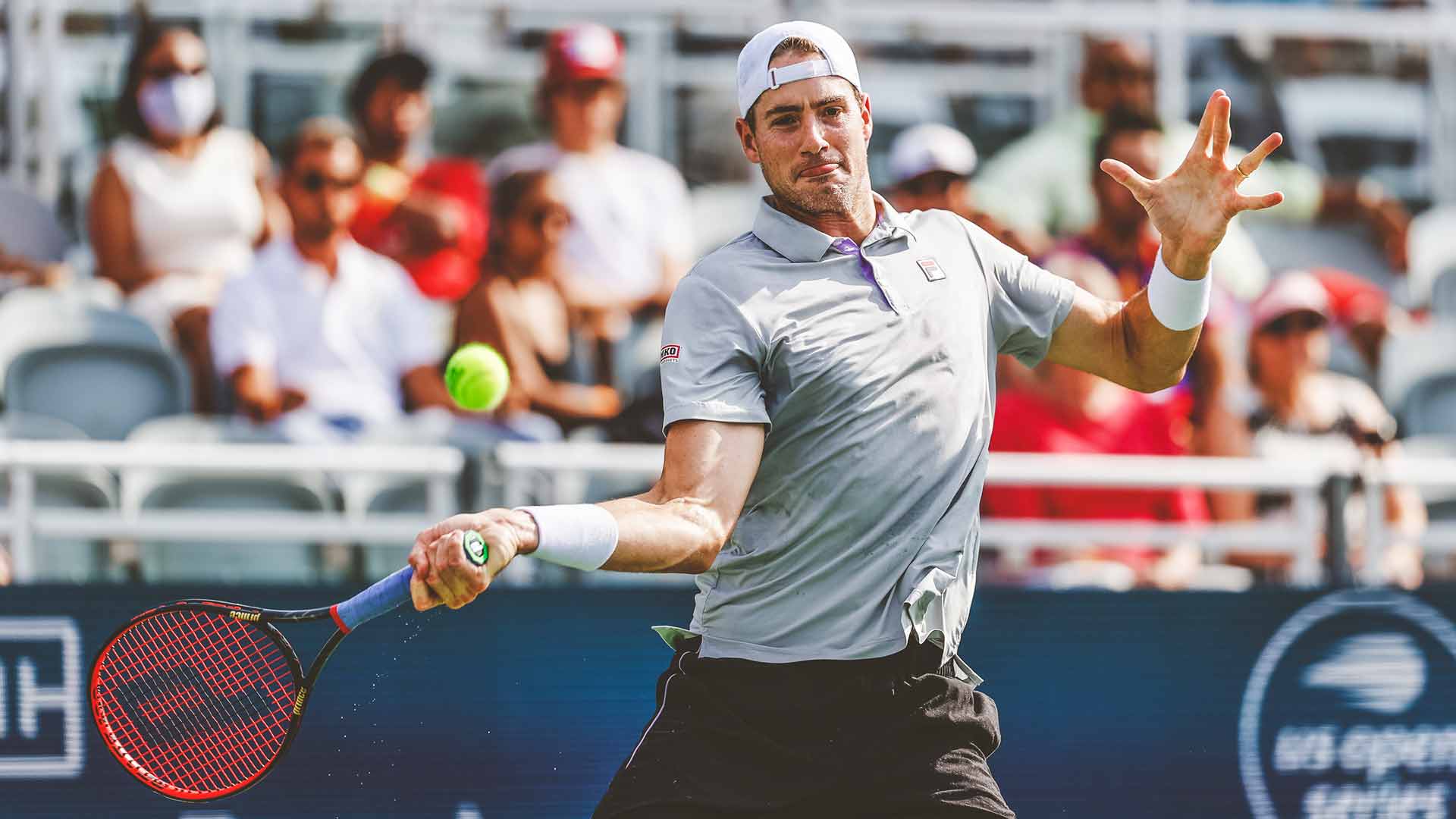 Photo Credit: Truist Atlanta Open/Alex Smith
Nakashima served well throughout the match, using his slice out wide and his second serve to the body to great effect. He earned his first set point of the opener on Isner’s serve at 6-5, but the veteran put away a short forehand to escape trouble. The former World No. 8 faced another set point at 6/7 in the tie-break, but came up with a crisp low forehand volley.

"Obviously I play a lot of those. It's a situation that I'm comfortable in because I've been on Tour forever," Isner said. "I think today I was just a little bit luckier and that's really what it came down to."

That was when Nakashima’s inconsistency came into play. The #NextGenATP star attempted a flashy leaping backhand at 8/8, but missed in the net. He then missed a second-serve return long to give Isner the set.

You May Also Like: The Last Time With… John Isner

Nakashima was in deep trouble at 4-5 in the second set when serving at 0/40. But the young American remained calm and played aggressive tennis to save four championship points and take the momentum. It was that focus that helped the teen make two impressive runs over the past two weeks.

Isner was under pressure in the next game facing two break points, but served his way out of trouble. And one game later, Nakashima hit a double fault that ricocheted off the top of the net to give Isner the victory.

"I knew it was going to be a tough match. He serves well and this court rewards a good first-serve percentage," Isner said. "He easily could have won the first set. I easily could have won 6-4 in the second... then I was able to save some break points at 5-5, which was crucial. I was also feeling really tired at that point, but luckily I was able to get over the line."

Nakashima did not become the youngest Atlanta champion in tournament history, but he is still projected to crack the Top 100 of the FedEx ATP Rankings on Monday.

"It was two great weeks for me for sure. It definitely gives me a lot of confidence in my game knowing that I could hang with these top guys and produce good tennis in back-to-back weeks," Nakashima said. "Leading into the next few tournaments and the US Open I know that I'm playing well and I know I could make deep runs there."

Isner, who went to a deciding set in three of his five matches, clinched his first tour-level crown since 2019 Newport and is now 36-5 in Atlanta. The 36-year-old hit a tournament record 127 aces during the week.

"It'll give me a lot of confidence for sure," Isner said. "Hopefully I can take this and go forward and build some momentum for the tournaments ahead."

Did You Know?
Isner is the third American man in the Open Era to win at least six titles at the same tournament. The other two are Pete Sampras (seven at Wimbledon) and Andre Agassi (six in Miami). Isner is also the oldest American champion on the ATP Tour since 37-year-old Jimmy Connors in Tel Aviv in 1989.