Janko Tipsarevic won his first tour-level match since the 2017 US Open on Wednesday in Miami.

Andrew Eichenholz
This article contains:
Former World No. 8 reflects on his injuries and battling back from them

Janko Tipsarevic went 570 days without a tour-level match win before advancing to the second round in Miami on Wednesday. But it took just seconds for Tipsarevic's smile to grow even brighter.

After the World No. 8 beat Bradley Klahn, his five-year-old daughter, Emili, ran onto the court during his on-court interview, saying, ‘Daddy! Daddy!’

“I’m extremely happy that we had this moment because since she’s basically been alive, Daddy has always had some leg issues: surgery, crutches, barely walking. She knew that Daddy was a tennis player, but she never actually saw me play,” said Tipsarevic, who will face Doha champion Roberto Bautista Agut in the second round of the Miami Open presented by Itau. “I’m extremely happy that she was able to sit throughout the duration of the full match and to just have this great moment with my wife sitting next to her.”

These are the moments the 34-year-old has been waiting for. Currently No. 453 in the ATP Rankings, Tipsarevic has gone through almost every lower-body injury you could think of: a benign tumor on his left foot that he underwent surgery for and then had to get removed again after it returned. Later, he suffered a right knee injury due to compensating in order to protect his left foot, on which he had those previous surgeries. That led to two surgeries on his right knee.

From September 2014 through the middle of August 2016, Tipsarevic climbed no higher than No. 392. But an inspired comeback saw him return to as high as No. 58 in May 2017. Just when Tipsarevic appeared back on track, both of his hamstrings ‘kind of failed’, and he ultimately underwent three hamstring tendon reattachments — two on his left hamstring and one on his right. That brought his surgery total to seven.

There were two moments when the four-time ATP Tour champion feared his career was over. The first was after the benign tumor on his foot was removed for the second time, as the doctor told him another reoccurrence would mean removing 100 per cent of his left sole, leaving him unable to do almost any physical activity. The other was after the second time he got his left hamstring reattached.

“This was a very difficult time. I tend to think that there are worse things in life, but it’s been extremely challenging for both me and my family,” Tipsarevic said. “Luckily through persistence and the motto that we have in both my life and [at] our academy, which is keep digging, or trying to still grind, it happened that I am back on the Tour.”

The obvious question may be a simple one: why? Why continue to push for a return at nearly 35 years old given all he has accomplished, including earning more than $8 million in prize money to competing at the Nitto ATP Finals twice (2011, ‘12)?

“In fairytales when pirates are looking for gold, the book is not 10 pages long. It’s normally 2-300 pages and in these 300 pages there’s normally a sea monster or a storm or enemies attacking them and then they dig at one place and they dig at another place, but the key factor in the keep digging hashtag is the persistence,” Tipsarevic said. “How long are you willing to dig?” 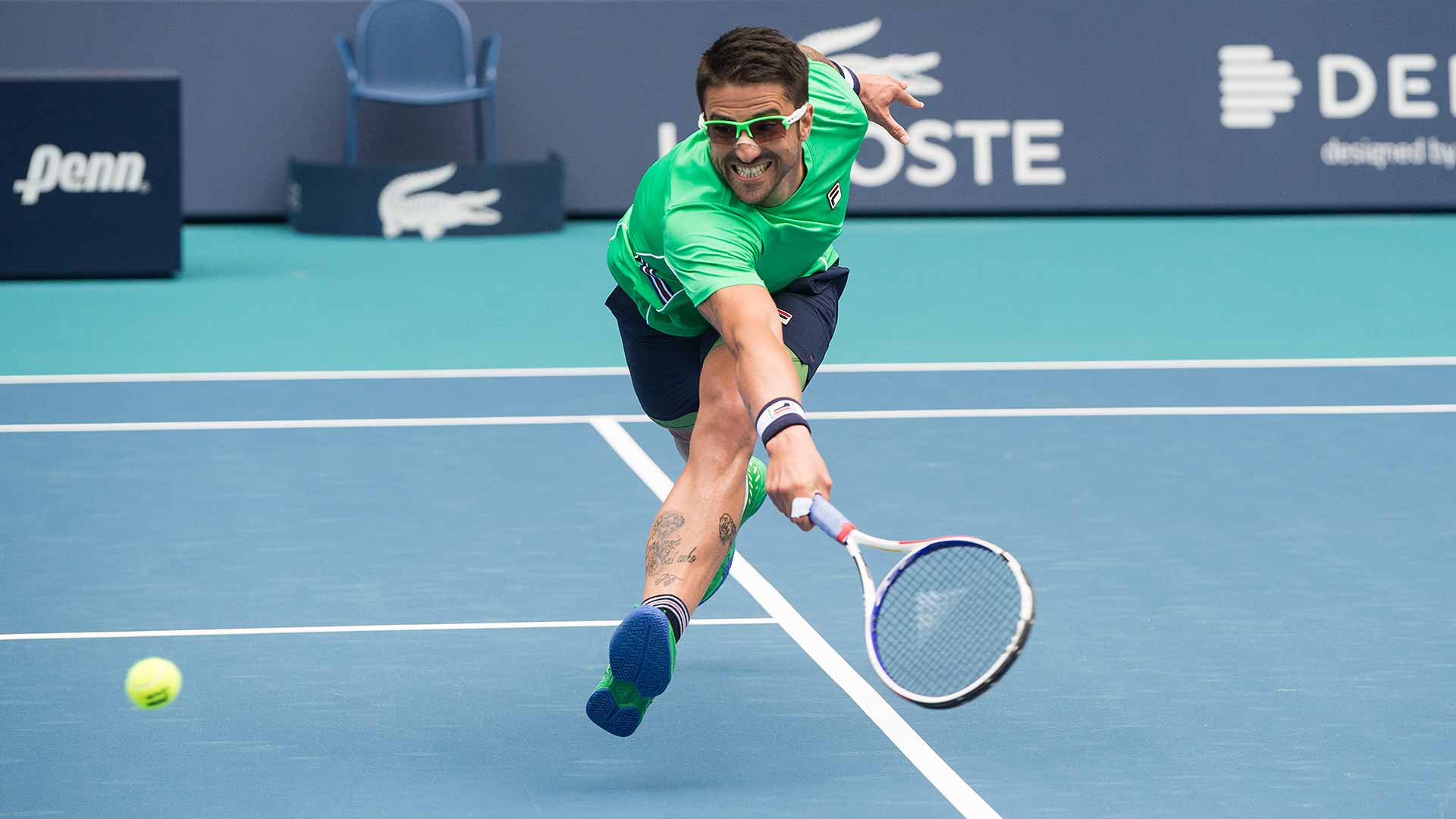 For Tipsarevic, it’s as deep as he has to. The Serbian knows that a return to the form that elevated him to the Top 10 is highly unlikely. But that doesn’t mean he won’t empty his tank to know that he got the best out of himself — that knowledge is more valuable to him than his best career results.

“If we’re talking five to 10 years from now and if I would have to choose, how great I played tennis doesn’t mean anything,” Tipsarevic said. “I tend to think that life moves forward and we shouldn’t hold what we did in the past as something really great. There’s a saying in the NBA or NFL or even European soccer, you’re only as good as your last player. It does obviously help… knowing that I was there. I was at the business end of Grand Slams, I was Top 10 for two years, played the [year-end] Masters two times, it does help that the player has confidence. But I would like that people see that no matter what happens, the digging factor is something which doesn’t only help in your professional career, it helps you in life.

“I’m obviously glad to be here. But I don’t see this, what I did [in coming back], as something special. This thing, it wasn’t easy. It was very hard but it’s normal for me because it’s not difficult to wake up at 6:00 a.m. or 7:00 a.m., do everything I did, do treatment, do whatever, work hard. If you have good habits, these things change your life.”

For now, Tipsarevic is strategically using his protected ranking to enter certain ATP Tour main draws, while he will also compete in three upcoming ATP Challenger Tour events in Mexico to try to rebuild his standing. His first major goal is to return to the Top 100.

“That is when you really see that the work and the persistence and all the treatments and surgeries and injections and painkillers and everything that we went through as a family actually paid off,” Tipsarevic said. “But for the very beginning, I’ll take a victory at an [ATP Masters] 1000 event, why not?”

Tipsarevic’s first-round victory in Miami was not something special in itself, having won 46 previous Masters 1000 matches and reached the Miami quarter-finals twice. But sharing a special moment with his daughter is something he will always cherish. Through all the hard work and setbacks, that is why he continues to dig.

“It really means a lot because I don’t know how many chances likes this we will have. My goal is to play in 2020, but I don’t know if I will be able to do it,” Tipsarevic said. “After that, even though I will stay in tennis, coach and she will come to these tournaments, it’s something else if she’s around here watching a player that I’m coaching or watching her father play. Obviously now she’s not aware of it, but hopefully one day she will remember.”