Steve Johnson visits Angel Stadium to throw out the ceremonial first pitch for his home team. 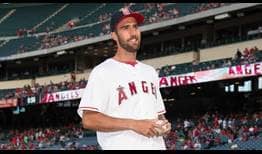 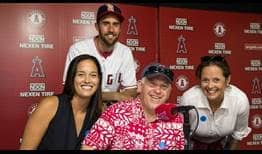 Steve Johnson has been an Angels fan for as long as he can remember. “Since the day I was born basically,” he attests. Living just down the road from Angel Stadium, the Johnson family frequently attended the MLB games, with Steve growing up idolising the likes of Tim Salmon, Garrett Anderson, David Eckstein, and Jered Weaver.

On one of those perfect Orange County evenings out with the family, a 13-year-old Johnson even managed to snag a foul ball. The couple sitting next to them had vacated their seats when the errant ball flew their way. “The foul ball came off pretty fast, smacked their seats pretty good, so I'm glad they weren't sitting there because it probably would've hurt a bit,” he told ATPWorldTour.com during a visit to the ballpark this summer. “You never expect something like that to come your way.”

On his return to the site of many happy memories, Johnson – wearing a personalised Angels jersey with the name Johnson stitched above the number 58 – paused to reflect during an evening that he would have shared proudly with his father had it not been for a ‘curveball’.

On 11 May, Steve Sr. passed away suddenly overnight. Johnson, riding the high of the Anaheim Ducks’ long-awaited series-clinching victory over the Edmonton Oilers in a Game 7 of the Stanley Cup playoffs the previous evening, received the unexpected call on Thursday morning at LAX. He had already checked into his flight to Rome, where he'd been planning on starting his European clay campaign, and was to be joined by his family a couple weeks later in Paris. Instead, everything came to a halt.

They bid farewell to the patriarch at 58 years young, and after much consideration, decided they would carry on in a manner that would please Steve Sr.: they would travel to Europe as a family, a plan that had been in the works for a couple of years. His sister Alison, on her first trans-Atlantic trip, mom Michelle and fiancée Kendall travelled with Steve to Paris, Stuttgart, Frankfurt and London across a five-week span.

“I think it was the right thing to do because that's exactly what he would've wanted to continue this amazing trip,” said Johnson. “It was easy to have them on the road, but it was also tough because you could see the pain, just the emotions, and my mom is really one of the strongest women I've ever been around, so to see her struggle from time to time, that was the hardest part.”

An athlete in an individual sport, Johnson was forced to deal with his emotional struggles in a very public setting. He first returned to the court in Geneva, a mere 11 days after his father’s death, and still managed to reach the quarter-finals that week.

With his family there to support him at Roland Garros, he persevered in an opening match that spanned two days, and followed with an emotional win over Borna Coric. He dropped to his knees after match point, broke down into tears and continued to weep as he spoke about his father during an on-court interview with Tennis Channel, saying, “I just miss my dad…[he] gave me the strength to finish it off.”

You May Also Like: Tearful Johnson Says Dad 'Was Looking Down On Me'

He matched his best result at Roland Garros. He reached the third round for just a second time at Wimbledon, and then dropped his next three matches on North American hard courts, all in three sets. Ahead of the US Open, Johnson advanced to the Winston-Salem Open quarter-finals. His on-court performance since that May day have been up and down, down and up, mirroring his feelings about his father’s death: “It's been super hard at times, and super rewarding at times.”

Though he was always aware of the impact Steve Sr. had in the tennis community, Johnson discovered a whole new side of his dad in the months to come, with countless acquaintances and strangers alike coming forward to tell him new stories about the impact his father had on their lives. “They go way above and beyond the tennis court that maybe none of us knew about just because that's the kind of guy he was.”

Steve played tennis at Orange High School, where his parents met and his dad continued to coach, and one story in particular resonated with him. “There was one kid I played with in high school. He made a few wrong turns, but he's kind of found his way back to tennis, and my dad really took him in. I had no idea about any of this, but they were as close as him and I may have been at the end because he was basically like a father figure to him.

“It's just those kinds of stories that make you very emotional, but it's the kind of guy he was, it's the guy I knew and the guy my mom fell in love with 50 years ago. It's been an up and down process. There are so many smiles that can turn into tears that turn right back into smiles.”

Back at Angel Stadium, recapturing the innocence and carefree nature of his childhood visits, Johnson was all smiles as he went up and down the different levels of the ballpark. Accompanied by Kendall and future parents-in-law Steve and Jane, Johnson took a VIP tour, watched batting practice on the field, met some of his childhood idols and even tried on a World Series ring commemorating the Angels' 2002 championship.

It was then time. As the last notes concluded on The Star-Spangled Banner, the solitary figure stepped into the diamond to deliver the ceremonial first pitch. But Johnson wasn't really alone. The number 58 on his back? “That's the year my dad was born and that was his age when he passed away. I got it for him...

“He definitely would've loved this experience today,” he said. “He's been an Angels fan way longer than I have, so it would've been fun, but life throws a curveball sometimes. I know he's looking down and still watching proud.”