Mary Pierce, Yevgeny Kafelnikov and Li Na celebrate their induction into the International Tennis Hall of Fame on 20 July 2019 in Newport.

Emotional Kafelnikov Inducted Into The Hall Of Fame

Andrew Eichenholz
This article contains:
Former No. 1 pays tribute to those who helped him throughout his life and career

Yevgeny Kafelnikov predicted that he would get emotional on Saturday evening when speaking to the crowd in Newport, Rhode Island, where he was inducted into the International Tennis Hall of Fame. But what he might not have expected, as the sun set on the Newport Casino, was to talk about omelettes.

It’s been a long journey for the Russian to reach this moment, having his name permanently etched into tennis’ history books for the rest of his life. The former World No. 1, who won two Grand Slam singles titles, an Olympic gold medal in singles in 2000, 27 tour-level doubles titles including four major triumphs, and much more, started his career like all other professionals — working his way up the tennis ladder.

You May Also Like: Kafelnikov On Hall Of Fame Induction: 'Finally My Whole Career Is Completed'

Kafelnikov took the crowd in the stands and the countless watching on television throughout the world back to the start of 1992, when he was competing in Portugal, with coach Anatoly Lepeshin by his side.

“He basically was like a second father to me, who told me how to compete, how to behave on the court, and how to be very professional,” Kafelnikov said. “It was six in the morning. He woke up and basically was looking after me, making me ham and cheese omelettes. That's the story. Then obviously my success at the young age really belongs to him, winning my first major in Paris in 1996. He was never giving me any freedom, so-called, if I can say that. We were practising five, six hours a day. So I'm thankful to him very much.”

Kafelnikov’s speech was entirely dedicated to thanking those around him who helped him to this day. He was introduced by another coach of his, Larry Stefanki, who worked with him from 1999-2001, helping the Russian win the 1999 Australian Open and become the first man from his country to reach No. 1 in the ATP Rankings later that year.

“We had a very similar thought process about competing at the very top level. Yevgeny learned the game of tennis old-school style. He was definitely a workhorse. Early on, he learned the importance of fundamentals, footwork, repetition, fitness and a work ethic that would bring him great success on tour,” Stefanki said. “He definitely had the mindset of a champion early on, and the self-belief that would propel him to the top of the game.” 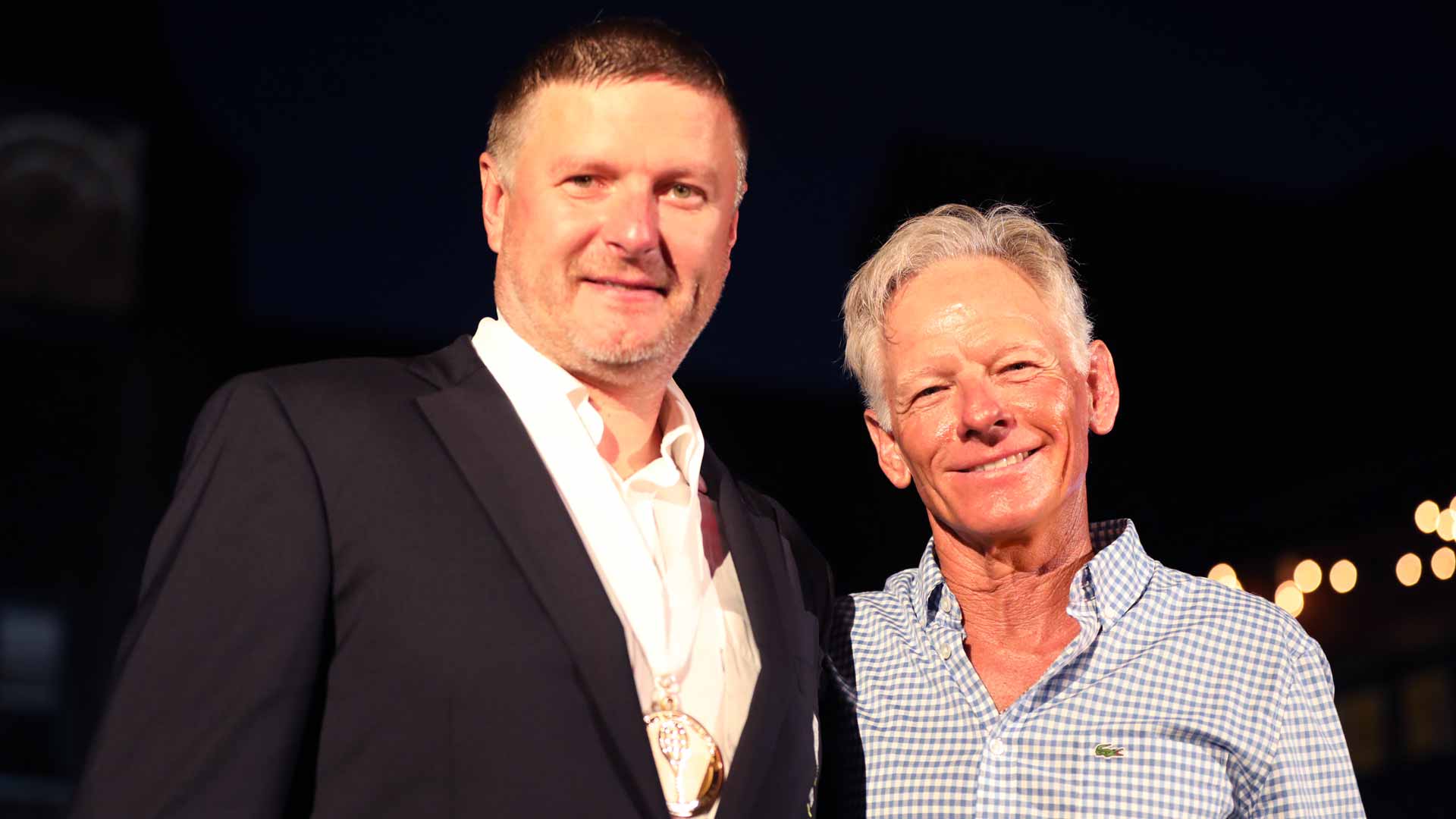 Kafelnikov also thanked his first coach, Valery Shishkin, who taught him the fundamentals of the game, straight from how to hold the racquet. He even helped set him on a path to develop what would become some of the signatures of his tennis.

In introducing Kafelnikov, Stefanki said that as much as his former charge accomplished on the court — Kafelnikov tallied a combined 967 tour-level wins in singles and doubles — he did plenty off of it, too, something that should be remembered alongside his efforts as a player.

“Yevgeny is a very generous individual. He donated his [winnings from the] 2001 and fifth Moscow Open victory in a row to the [victims of the] Siberian air disaster on the Black Sea. He started a pediatric hospital in his hometown where the kids could not afford surgeries. He also started an academy in his hometown outside Sochi, which started his playing career,” Stefanki said.

Kafelnikov made sure to pay homage to the most important people in his life: his parents. They could not make the ceremony, but he knew they’d be watching back home in Russia.

“I felt nothing but love, warmth and care. Mom and Dad, I know you're watching it, I love you so much,” Kafelnikov said. “You've been there for me through thick and thin. I love you. When I come back home, we will celebrate this wonderful day.”

Kafelnikov was keen to take in all the history around him throughout the weekend. And now, after the induction ceremony, he is now part of that history as a Hall of Famer.

“I know what it's like and how to be a Hall of Famer, and I will definitely carry that responsibility for the rest of my life.” 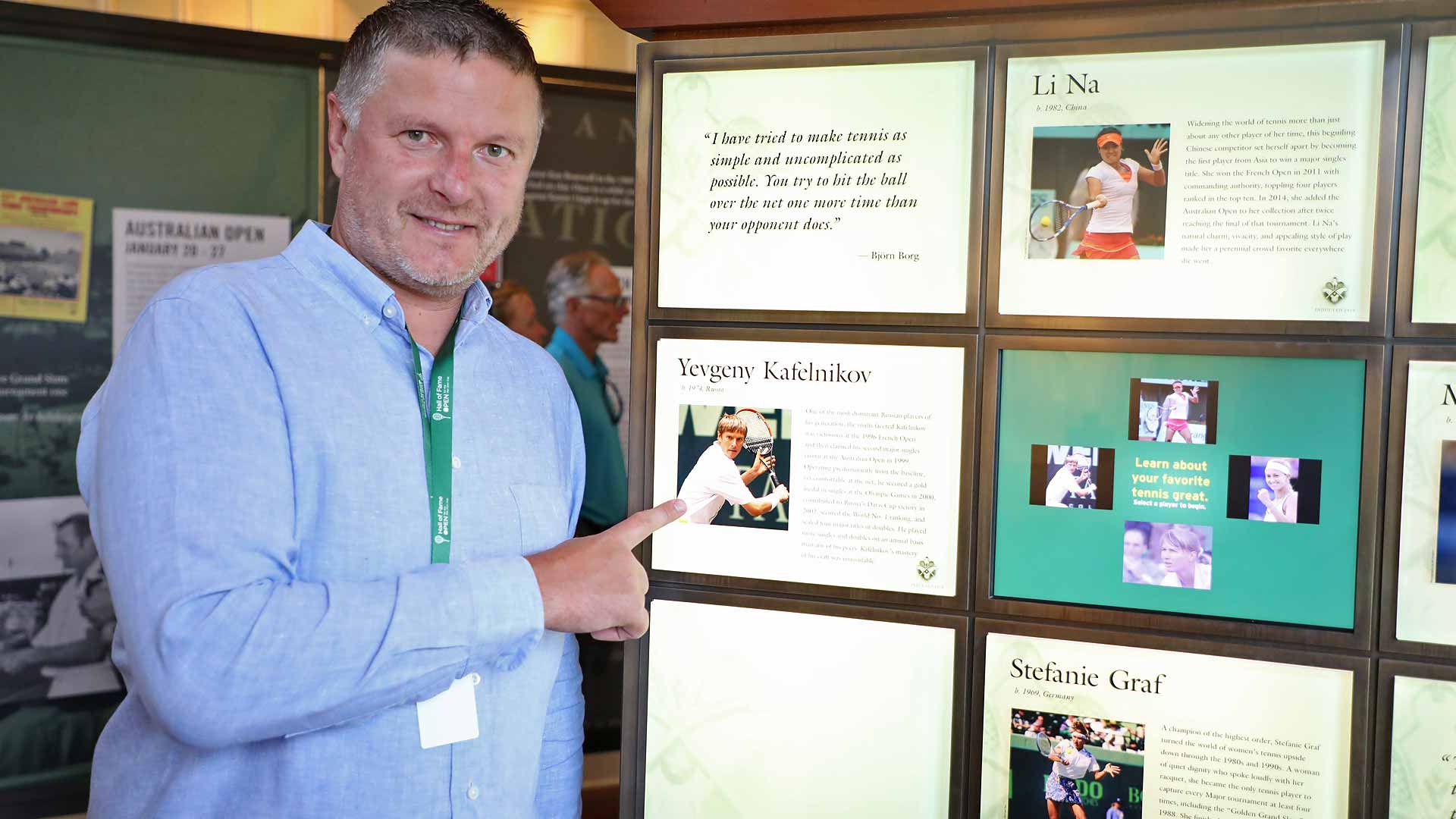