Yevgeny Kafelnikov, who reached World No. 1 in singles and No. 4 in doubles, celebrates his induction into the International Tennis Hall of Fame on Saturday in Newport.

Flashback To Kafelnikov's Hall Of Fame Induction: 'Finally My Whole Career Is Completed'

ATP Staff
This article contains:
Former World No. 1 reflects on his career and legacy before his induction

Editor's Note: ATPTour.com is resurfacing features to bring fans closer to their favourite players during the current suspension in tournament play. This story was originally published on 20 July 2019.

This January, Yevgeny Kafelnikov was on holiday in Dubai when his phone rang. The Russian didn’t know the number, but he knew it was from the United States. When Kafelnikov picked up, International Tennis Hall of Fame President Stan Smith was on the line.

“I just want to tell you that you’ve been inducted into the Hall of Fame,” Smith told him.

“I got stunned for five seconds and just replied, ‘Thank you, Stan. It’s great news that you’ve brought me.’”

That is when it started to set in for Kafelnikov, a 26-time tour-level singles titlist and 27-time doubles champion, who won nearly $24 million in combined prize money during his career. In his own words, finally, he was in.

“It’s one of those things where I understand that finally my whole career is completed,” Kafelnikov said. “This was the last sort of pinnacle that every professional athlete wants to accomplish. To be recognised as a Hall of Famer, it’s a huge honour.”

On Friday afternoon, Kafelnikov arrived at the Newport Casino for the first time, and he certainly took in his surroundings with a smile on his face. Immediately upon walking up the stairs of the museum at the International Tennis Hall of Fame, the Russian was examining every corner to learn about the history of the game and the sport’s legends. 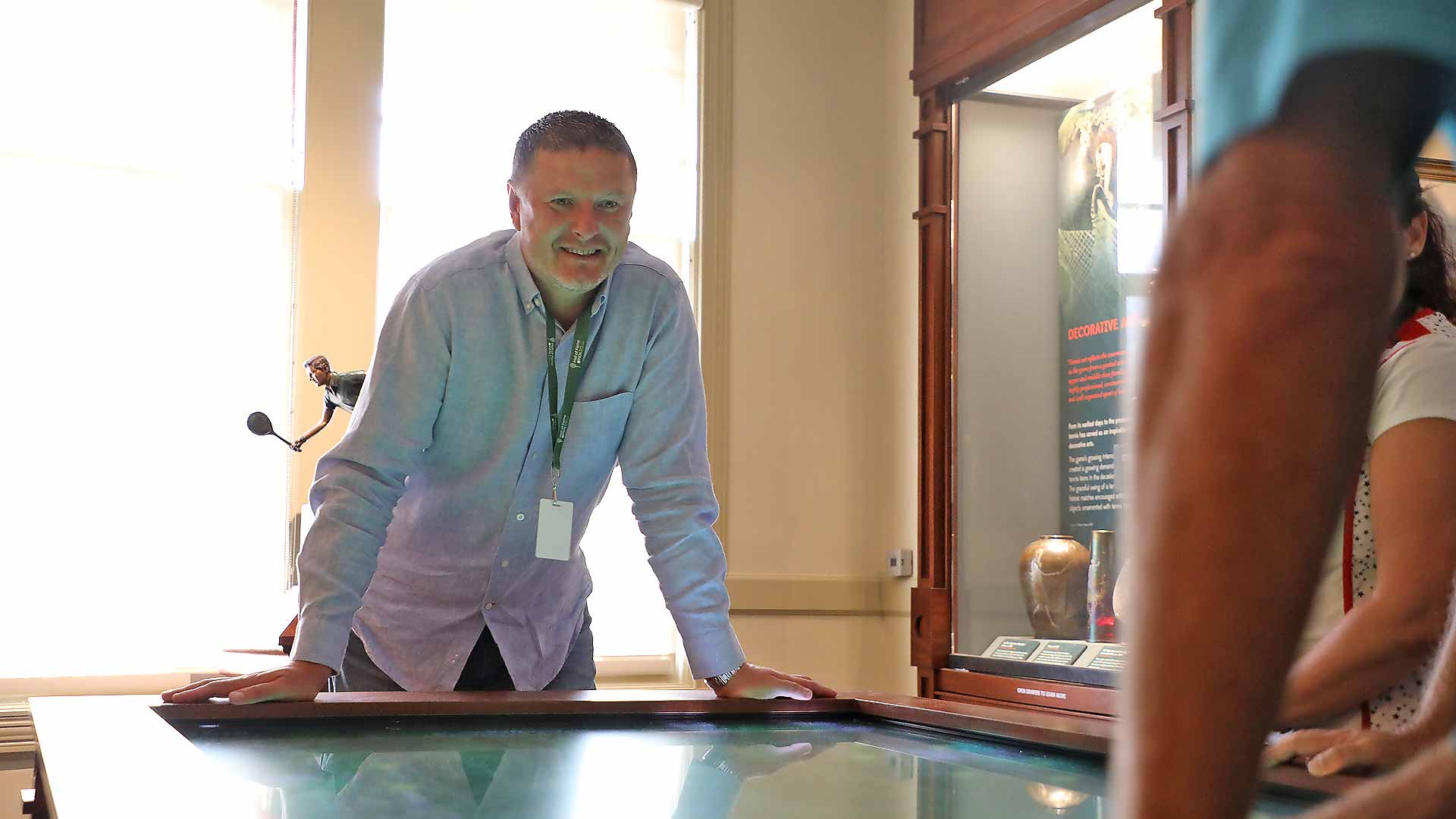 “It’s beyond understanding. Unless you really see for yourself what it’s like, what this place is all about, you’re not going to believe it,” Kafelnikov said. “For me, it was mind-blowing yesterday when I walked in. You really understand the history of the game. On top of that, you understand the whole value, being a member of the Hall of Fame.”

To earn this recognition, Kafelnikov finished inside the Top 5 of the year-end ATP Rankings five times, claimed Grand Slam singles titles at 1996 Roland Garros and the 1999 Australian Open, captured four major doubles trophies and the 2000 Olympic gold medal in singles. Combining both disciplines, Kafelnikov won 967 tour-level matches, and he is the last person to win the singles and doubles title at the same Grand Slam, doing so in Paris 23 years ago.

“I cannot put one above the other, talking about being No. 1 in the world, winning the Davis Cup, winning Olympic gold and winning two majors,” Kafelnikov said. “They all stand on the same plateau for me. They’re all important. I’m here because of those accomplishments.” 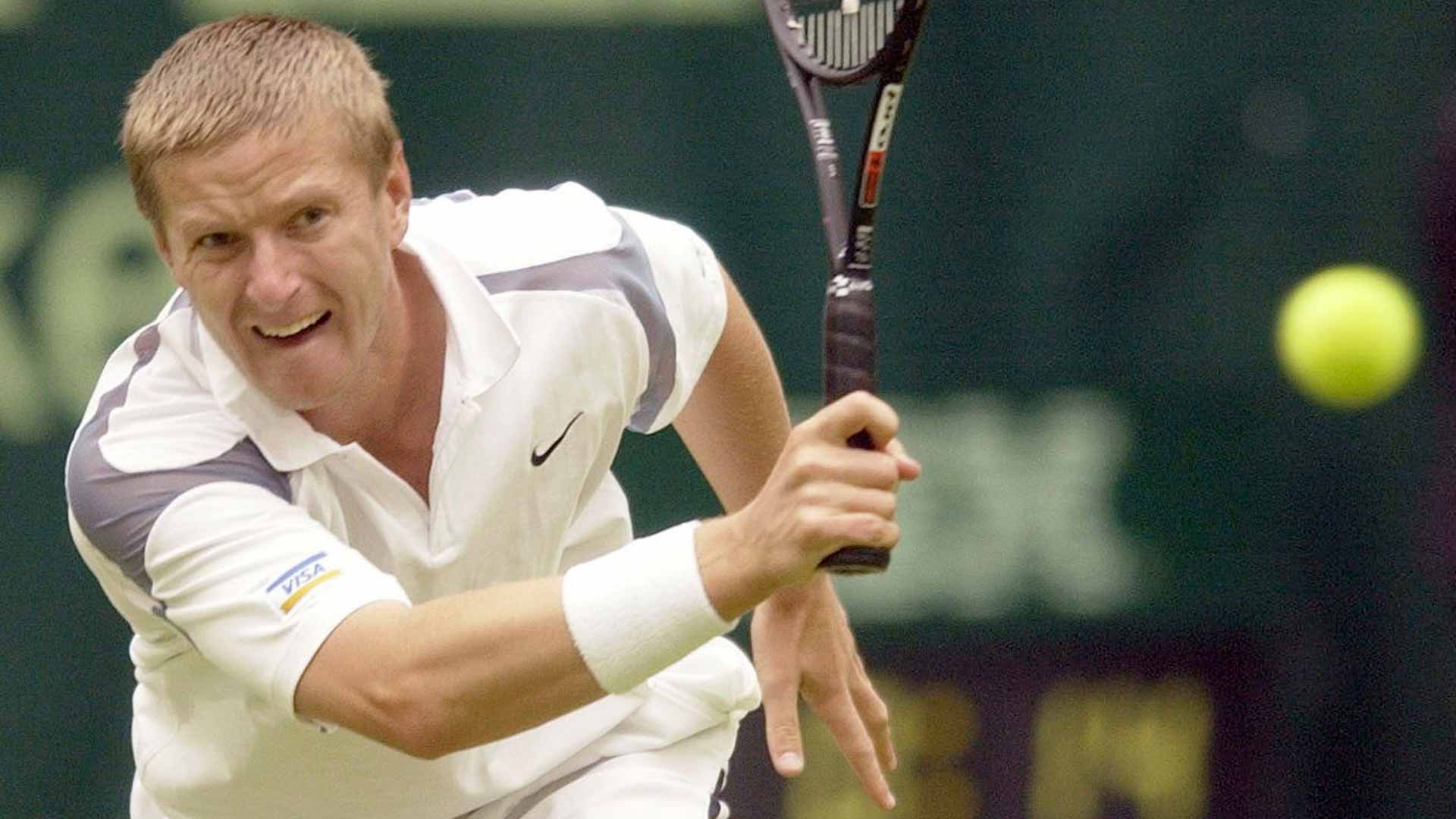 The Russian took great interest in all of the exhibits in the museum, recalling the matches from which there were racquets or clothing on display. Now, when fans visit Newport, Rhode Island, they will see that Kafelnikov is part of the illustrious group that has gained induction.

“Trust me, I would never in the slightest imagine myself accomplishing what I accomplished in my career,” Kafelnikov said. “If you ask me the question if it would be possible to go back in time to do it again, to go back to the age of 10, 11, I would never do that because I understand how difficult it was in terms of working hard and what kind of effort I put in to become what I am. It’s really special.”

To Kafelnikov, his story is one of hard work. He doesn’t feel that he won his matches and titles purely because of his skill.

“I was not even close to being as gifted as John McEnroe or Roger Federer or even Marat Safin, or Marcelo Rios or Nick Kyrgios,” Kafelnikov said. “I was never that gifted. But I was a really hard worker. I’m sure that because of that, I’ve got all my titles, all my goals.”

International Tennis Hall of Fame President Stan Smith was particularly impressed by Kafelnikov’s ability to succeed in both the singles and doubles court, as well as how well he was able to be like an “iron man”, doing both at the same time as well as shine for his country.

“Yevgeny was really solid. He was good on all surfaces. On the clay [of Roland Garros] he won the doubles three times, but he was also good on the hard courts. He had a relatively short career compared to Federer or somebody like that. Everybody is in that boat. [But] when he was playing, he was a tough opponent for anybody, any style of play, because he could play aggressively, play as a counter puncher. He had a good all-around game,” Smith said. “He wasn’t the type of guy where you’d say you’re not playing him on clay, so he’s not as good or you’re playing him on hard courts and he’s not as good. He was good on all surfaces.”

Today, Kafelnikov wakes up at 9 am, showers, has breakfast, and then heads to the local golf club where he enjoys a round with his close friends. He’s also the vice president of the Russian Tennis Federation, keeping him closely involved in the sport. So even though he enjoys his down time on the golf course, he has certainly not left tennis, and knows that his induction is also a responsibility.

“It’s a wonderful experience,” Kafelnikov said. “I understand that many years from now, I will understand how important it was for me to get into the Hall of Fame.” 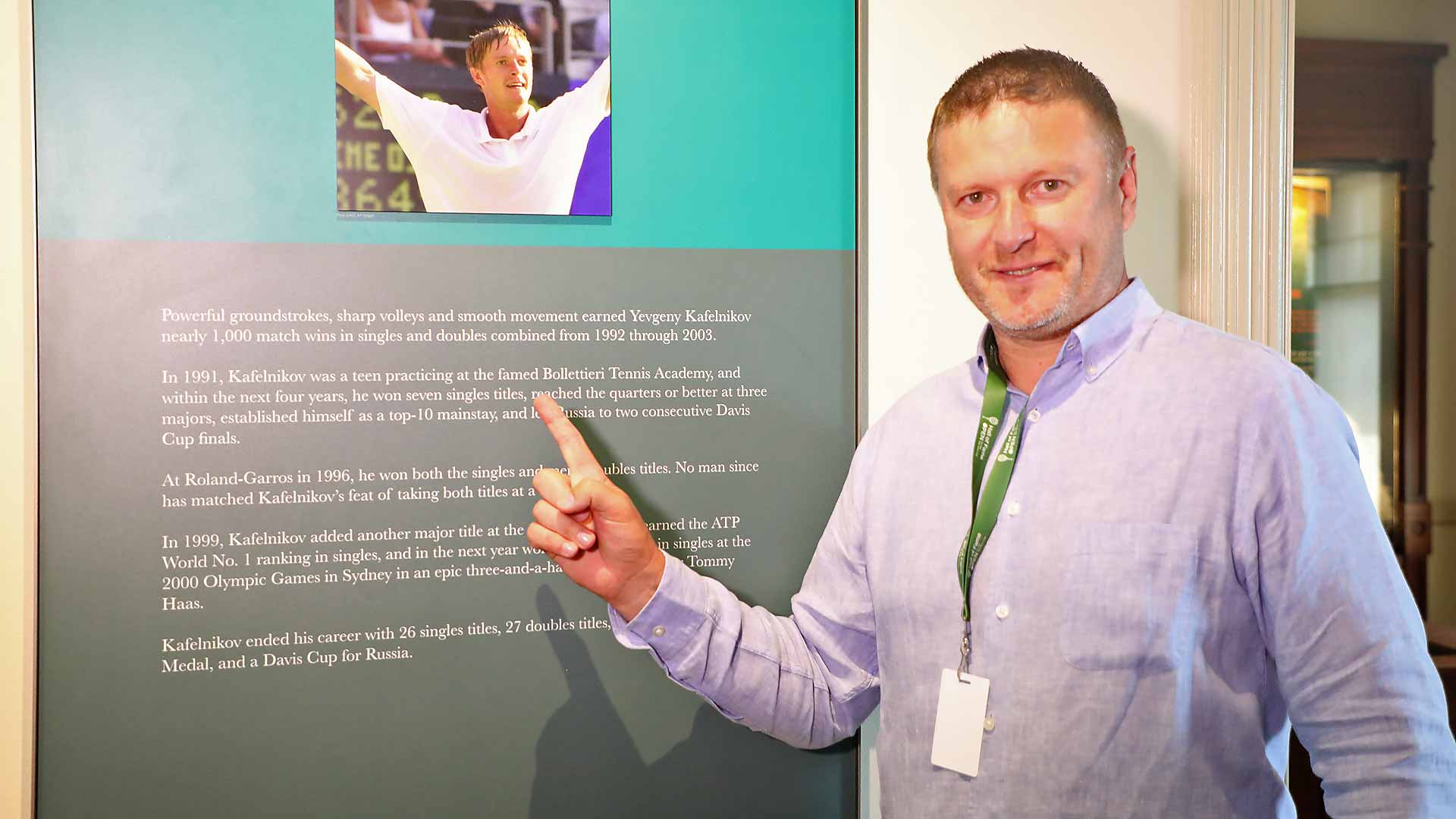 One of the first things an emotional Kafelnikov did when he set foot in the Woolard Family Enshrinement Gallery was look for the plaque there for his good friend Marat Safin, who was inducted in 2016. He remembers the conversation he had with Safin after he received the news of his own honour in January.

“He said, ‘Yevgeny, I’m very happy for you. I don’t know if I should say this, but you should be way before me into the Hall of Fame’,” Kafelnikov recalled. “I said, ‘Man, it’s better than never. Sooner rather than later. Now we’re both Hall of Famers.’ It’s definitely a big one for both of us, big one for Russia.”

Kafelnikov was the first Russian to reach No. 1 in the ATP Rankings, which he did in 1999. And he also was the first Russian man to win a Grand Slam singles title. He is happy to see the success of his countrymen since, with both Karen Khachanov and Daniil Medvedev cracking the Top 10 this year.

"They’ll understand looking at myself and Marat, I’m sure they understand by now, everything is possible,” Kafelnikov said. “You just need to work hard. You just need to have goals and be really dedicated to the sport that you love most and I think that’s how I want to be remembered: as a player who just sacrificed many things to get to where I am right now.”

Kafelnikov’s tour finished in the Peggy Woolard Library, where he once again got emotional as he signed the museum’s memory book, with notes that the Hall of Famers sign just before their induction. He wrote the below, pausing to take in the moment:

Never ever I have been so emotional visiting this wonderful place! I am very honored to become a member of this place for the rest of my life! Love you all, 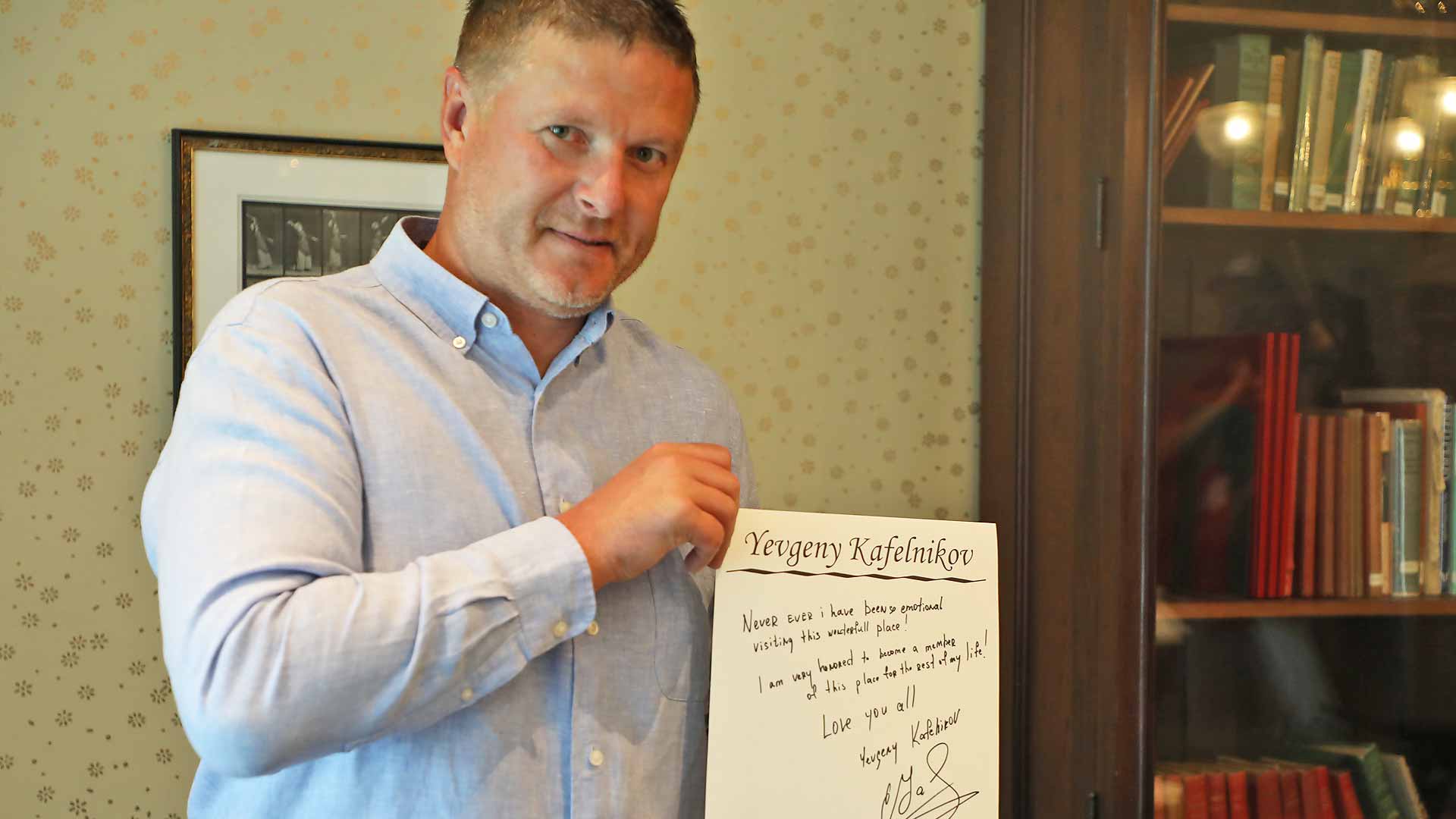