Aslan Karatsev reached another milestone in his fairytale start to the 2021 ATP Tour season on Saturday when he beat Lloyd Harris 6-3, 6-2 to claim his maiden ATP Tour title at the Dubai Duty Free Tennis Championships.

The 27-year-old ripped 27 winners and saved the two break points he faced to become the third Russian champion on the ATP Tour this season. Karatsev joins Daniil Medvedev (Marseille) and Andrey Rublev (Rotterdam) on that list. All three players were a part of the title-winning Russian team at last month’s ATP Cup.

“I am super happy. It was a tight match. [I was] really nervous,” Karatsev said in an on-court interview. “I want to congratulate my opponent for the final [run]. He did a great week… I am happy that I won.” 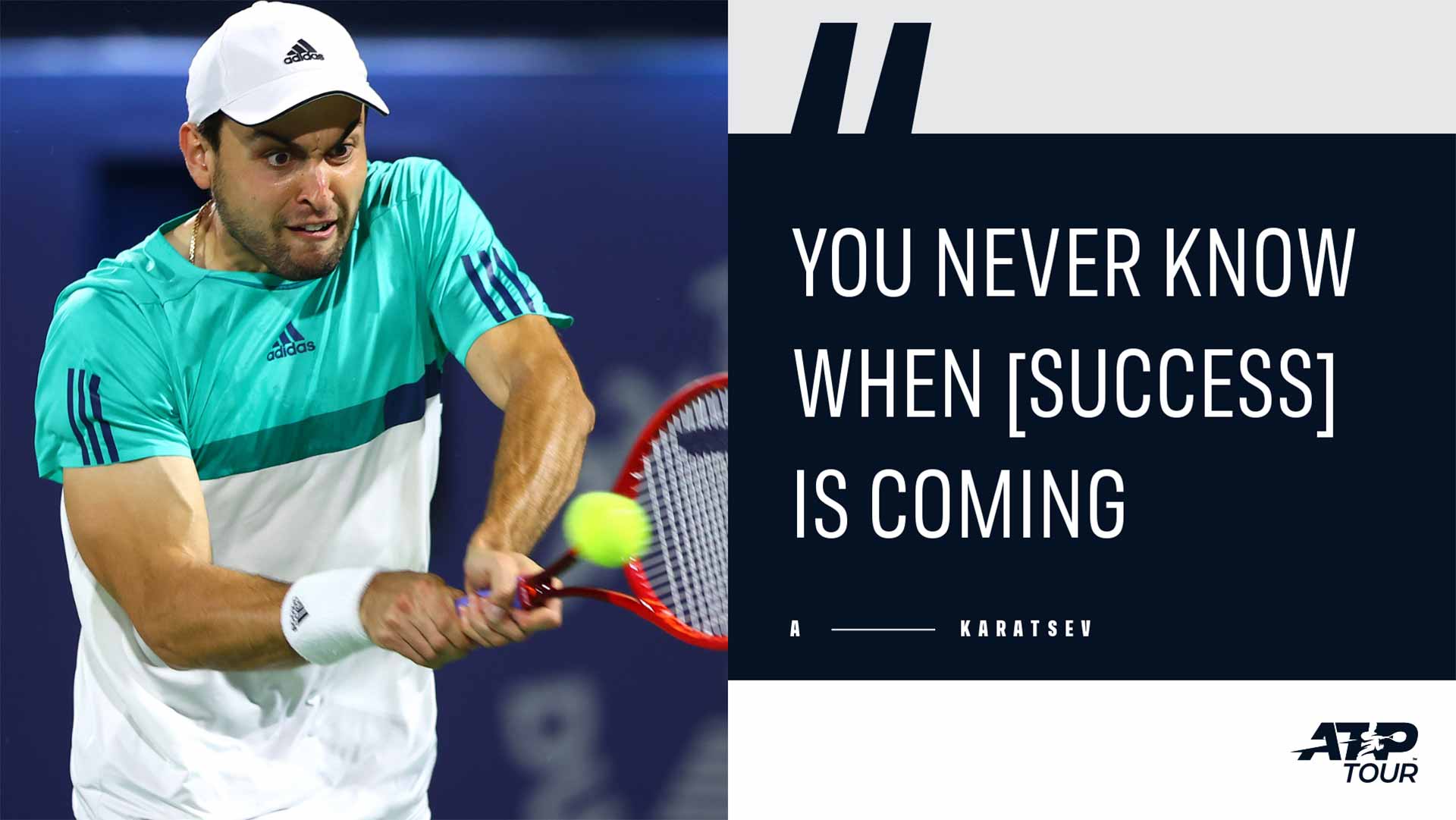 Karatsev started this season with a 3-10 record at tour-level. The 6’1” right-hander, who reached the Australian Open semi-finals as a qualifier last month, has compiled a 12-2 record this year. World No. 1 Novak Djokovic (Australian Open) and World No. 4 Dominic Thiem (Doha) are the only two players to have defeated the Russian in 2021.

“You never know when [success] is coming," said Karatsev. "I did a good job with my team, with my coach and it has happened now.”

You May Also Like: Declassified: Karatsev No Longer Russia's 'Secret Weapon'

Karatsev has solidified his place in fifth position in the FedEx ATP Race To Turin. Medvedev (second) and Rublev (third) also feature in the Top 5 qualification positions for the Nitto ATP Finals.

“I am really happy with my performance and [I am] really happy with my game,” said Karatsev. “At the beginning of the year, [I was happy] to play an Australian Open semi-final [and] to show a great level. After the Australian Open, I kept going, practising hard… I arrived here with more belief than in Doha. I showed a fantastic week and a good game.”

The World No. 42 is the third wild card to win this ATP 500 event. Karatsev, who beat four seeded players en route to the final, joins Wayne Ferreira (1995) and Thomas Muster (1997) in the exclusive club.

Karatsev made the perfect start to his first ATP Tour final, as he ripped groundstrokes into Harris’ forehand corner to break serve in his first return game. The Russian opened the court well and struck 12 winners in the first set. Karatsev dominated behind his second serve return throughout the match (10/12) and clinched the trophy with an overhead winner.

Harris was also aiming to lift his first ATP Tour trophy. The South African won seven matches in as many days from qualifying to reach his second tour-level championship match (0-2). En route to the final, Harris earned the two biggest wins of his career against World No. 4 Dominic Thiem and World No. 12 Denis Shapovalov.

“There are so many positives to take from this week, coming through seven matches,” said Harris. “Aslan today was just too good. Sometimes it happens like that and you have just got to take all the big [positives] from the week, move forward and take them into the next tournaments.”

Did You Know?
Karatsev and Harris’ encounter marked the first meeting between a qualifier and a wild card on the ATP Tour since [WC] Fabio Fognini beat [Q] Yannick Hanfmann in the 2017 Swiss Open Gstaad championship match.