Partnered with former WTA Doubles World No. 1 Elena Vesnina, Aslan Karatsev is into the semi-finals in his mixed doubles debut at Roland Garros.

Stephanie Livaudais
This article contains:
With his stock high after the Australian Open, Karatsev propositioned the former Olympic doubles gold medalist early to play Roland Garros together. "Aslan, it's only February!," Vesnina texted back

Editor's Note: Aslan Karatsev and Elena Vesnina have advanced to the mixed doubles final at Roland Garros after a 6-4, 6-1 win over third seeds Wesley Koolhof and Demi Schuurs.

After his breakthrough run at the Australian Open, Aslan Karatsev’s tennis career changed forever. But the Russian had just one thing on his mind: playing mixed doubles with former WTA Doubles World No. 1 Elena Vesnina.

The all-Russian duo is currently into the semi-finals at Roland Garros, their first event as a team – and Karatsev’s first mixed doubles event of his career. The pair have an eye on an Olympic berth at the Summer Games in Tokyo, with the 27-year-old having already clinched his spot in singles after rising to a career-high No. 25 in the FedEx ATP Rankings.

“We spoke before the tournament, like two months ago, and I asked her to try to play mixed with me,” Karatsev said. “I was asking her if she wants to play mixed because it’s a good opportunity to play [in the] Olympics together. She has a good experience. She’s had a great career in the past [and] she continues right now after she stopped for two years.”

Karatsev reached out to the 2016 doubles Olympic gold medalist when Vesnina was still taking the first steps of her comeback to tennis after maternity leave. The former WTA No. 1, who owns three Grand Slam titles in doubles, including a victory at Roland Garros in 2013, stepped away from the sport for two years after giving birth to daughter Elizaveta in November 2018.

“I was honestly surprised when I saw the message from him,” Vesnina said. “He texted me in February. I had one match in [the WTA 500 event in] Doha. He was like, ‘Oh hey, do you want to play mixed with me at the French?’ And I was like, ‘Aslan, it’s only February!’”

“She was really pumped!” Karatsev said after their 6-7(3), 6-2, 10-8 comeback win over the second seeds. “I didn’t show that I was pumped, but I was trying to focus on the game. In the second set, she was staying pumped and she was always telling me we were playing good, 'Keep going, keep going!' Sometimes she tells me some advice, where I have to cover more and where I have to open more... She shares her experience.” 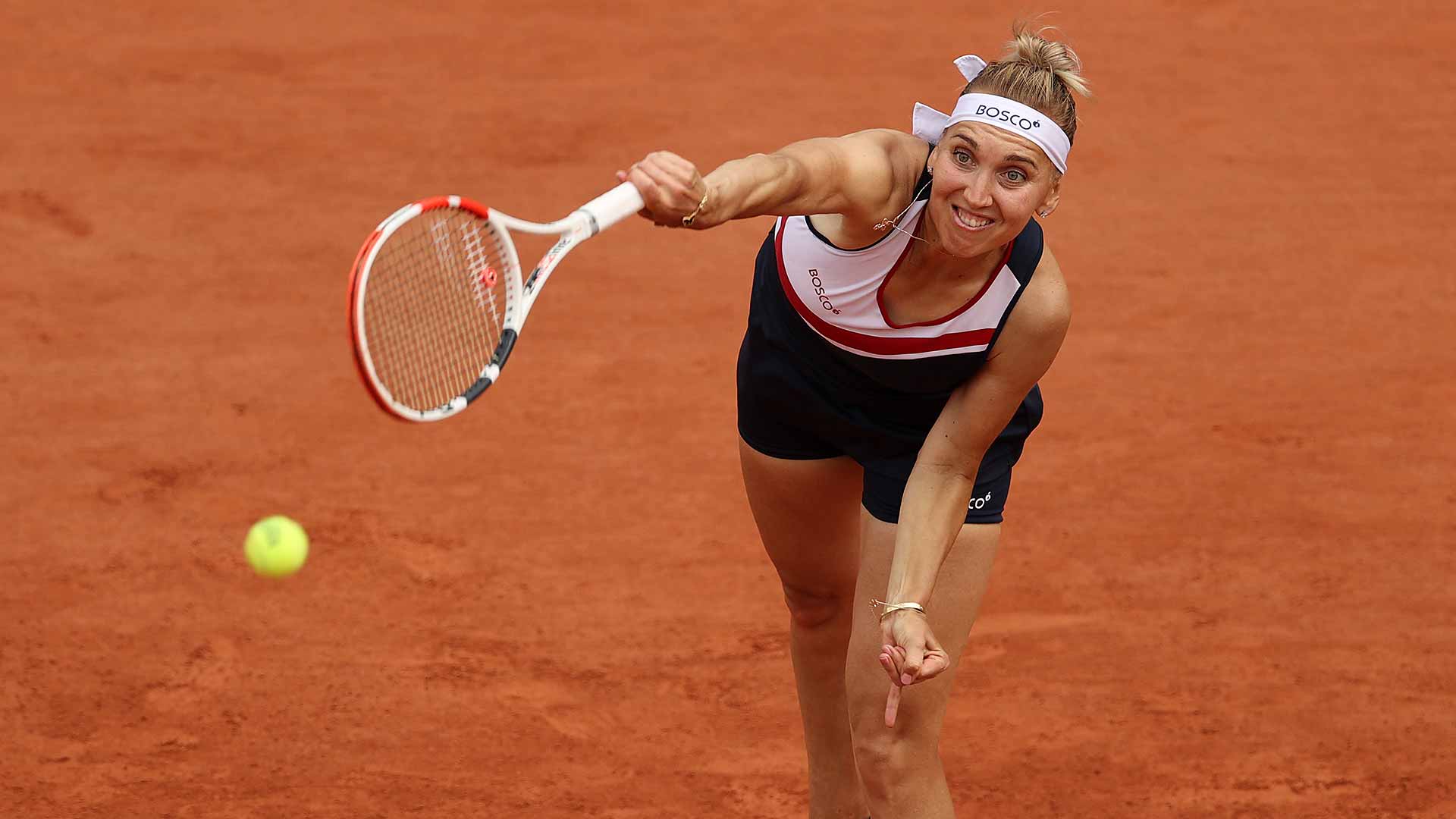 “He is a very, very quiet guy. He’s not talking a lot, he’s more inside himself – about his thoughts, about his game,” Vesnina said, after the pair turned around a 3/6 deficit to win the Match Tie-break. “I’m trying to relax the atmosphere a little bit. I would tell him, ‘You are better. You are so much better than everybody else on the court here. Just play your game. Just go with the flow, it’s your game and you’re playing great, and you’re the best on the court right now.’ Trying to give him that self-belief.”

Vesnina knows what a bit of self-belief can do for Karatsev, who exploded onto the scene at the Australian Open with a run from qualifying to the semi-finals (l. Djokovic) in his Grand Slam main draw debut. The 34-year-old, who remembers watching Karatsev as a promising junior, was following his results from home and said the key was Russia’s ATP Cup triumph the week before.

“He’s a really great example of a player who didn’t give up, who keeps working hard, believing, playing smaller tournaments. He always had the game,” she recalled. “It was amazing that he broke through with this great run at the Australian Open, going from qualies to the semi-finals.

“But I think it was a great push up that he was in the Russian team the week before that won the ATP Cup. I think this gave him some confidence and self-belief. Because when you’re on the team and you have the shots, you just need a little bit of belief.”

Though they might have their wires crossed on who the leader of their partnership is – Karatsev, playing in his first mixed doubles event, thinks it’s him, while the experienced Vesnina knows it’s her – their common goal remains the same.

“I have a great partner, I’m really enjoying playing with Aslan,” Vesnina said. “He’s always so confident, so serious, and I’m a little bit more relaxed on the court. It’s great to play these big matches. That’s what you need: a big stage, big points, Super Tie-break. You need these kinds of matches to grow up and improve your game.”

“I have to get some experience in the mixed game,” Karatsev added. “Sometimes [going] to the net, [learning] where to move in the right spots at the right moments… It’s something new for me. It’s good experience. I like it.”

On Tuesday Karatsev and Vesnina face the third-seeded Dutch duo of Wesley Koolhof and Demi Schuurs for a place in the Roland Garros mixed doubles final.