Steve Kerr watches Roger Federer compete in the fourth round of the US Open against John Millman.

Rafa, Roger Or Novak? Coach Kerr Reveals Who Would Get A Warriors' Contract

Andrew Eichenholz
This article contains:
Warriors head coach reflects on his love for tennis and speaks of his favourite players

Steve Kerr, the head coach of the NBA’s Golden State Warriors, knows something about winning. He claimed five championships as a player, and has won three titles in the past four years as a coach.

So when the longtime tennis fan, who has spent time at the US Open this week, says he’s impressed, that holds weight.

“The sport is one that I just really connect with and I love watching the modern-day player,” Kerr told ATPWorldTour.com. “I mean the guys on the men’s side right now, this is as good as it will ever get. These guys are some of the greatest players of all-time.”

Kerr follows the bigger tournaments from afar, and he comes to New York, where his wife is from, to enjoy the world’s best compete in person.

“I love coming here,” Kerr said. “It works out well with our schedule with the NBA because we don’t start training camp until September. So this is always kind of a fun vacation, an unbelievable sporting event for us. I love tennis, love watching these guys, love New York, so it’s always a great week.” 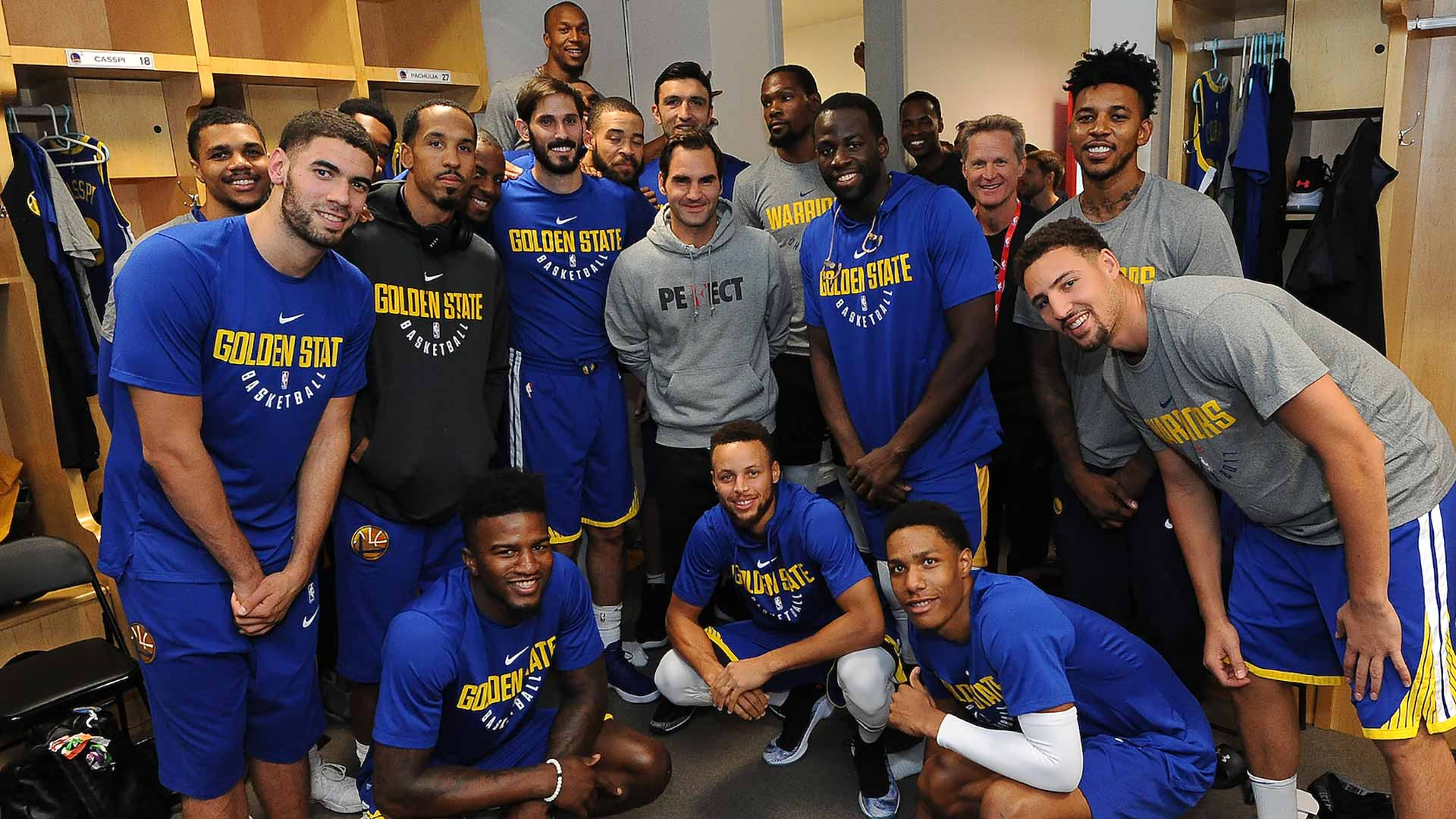 Photo Credit: Golden State Warriors
Kerr’s experience with tennis has not come solely at the US Open, though. The Warriors were in Shanghai last October for an exhibition game during the Rolex Shanghai Masters. One thing led to another and Roger Federer visited the team in its locker room. Kerr remembers his players ‘peppering him with questions’, and Federer’s response to one in particular stood out.

“That was amazing,” Kerr said. “Draymond Green asked him, ‘How have you been able to stay on top for so long?’ Because that’s what we’re trying to do with the Warriors. We’re trying to keep it going and it’s hard. Roger’s been doing it forever. His answer was so profound. He talked about his work-life balance, how much he loves his life. He loves his family. He loves his daily routine of taking his kids to school and practising and playing tennis and cooking dinner. He reminded me a lot of Steph Curry in that regard. He’s taken what could be a very complex life and really distilled it down into a simple, joyful one, and I think our guys really took something with that.”

And, as Kerr says, there are some similarities between basketball and tennis that he appreciates.

“The movement is very similar. It’s one of the reasons I loved playing tennis. I can’t do it anymore, because my knees don’t hold up, but I loved playing for years after I retired because the movements were all very similar,” Kerr said. “You’re chasing a ball, you’re down in a crouch. A defensive stance in basketball is the same position you’d be in in tennis, getting ready for your next shot. Lateral movements, up and back, jumping up to hit a lob, whatever.”

It is safe to say the coach has been able to see plenty of that in Flushing Meadows. And you won’t be surprised by who some of his favourite players to watch are.

“Roger is Roger. Everyone likes watching him. [Novak] Djokovic is a favourite of mine. I love his movement on the court. He just seems to cover everything side to side. He’s so fast and agile. It’s hard not to like [Rafael] Nadal. Very unique, just with the spin that he puts on the ball. He looks like a linebacker out there. He’s such a physical force. But I love those guys,” Kerr said. “I was a big Andy Roddick fan while he played. I was always cheering for Andy. But really I love this era. I think, as a tennis fan, we’re lucky to be in this era where we probably have three of the top six or seven players of all-time playing right now and they have been playing over the past decade or so at just an incredibly high level.”

Now, it’s safe to say Kerr’s Warriors are doing just fine. But would he give any of the ATP World Tour’s players a shot?

“Gosh. I might go with Djokovic,” Kerr said. “I think he can guard anybody. He moves his feet extremely well. Side to side, I think he can stay in front of anybody. I think he’d be good in the fast break. I’d like to see him on a basketball court.”

But first, you can catch the two-time US Open champion on the tennis court Wednesday night as he faces John Millman in the quarter-finals.