Jan-Lennard Struff completed the seventh Top 10 win of his career on Tuesday with a smash winner from the baseline at the Rolex Paris Masters. The 29-year-old German held his nerve to record a 7-6(5), 3-6, 7-5 victory over World No. 8 Karen Khachanov, the defending champion, in two hours.

Struff will now prepare to face 10th-seeded Italian Matteo Berrettini, a contender for a spot at the Nitto ATP Finals, or French wild card and 2008 titlist Jo-Wilfried Tsonga in the third round on Thursday.

Struff clinched the 46-minute first set with a backhand return winner at 5/5 in the tie-break, followed by his eighth ace. But Khachanov won 12 of the first 17 points for a 3-0 lead in the second set.

World No. 36 Struff could not capitalise on a 3-1 advantage in the final set, broken by Khachanov in the fifth game. But leading 6-5, Struff converted his first match point with his 43rd winner, a cleanly hit smash from the baseline. Khachanov, who is now 29-26 on the season, had previously beaten Struff in three sets at the Noventi Open in June.

Struff was particularly eager to come forward against the 6'6" Russian, as seen in Hawkeye's court coverage heat map, which demonstrate's Stuff willingness to get to net. Additionally, Struff hit 31 per cent of his groundstrokes inside the baseline, almost double Khachanov's rate of 16 per cent.. 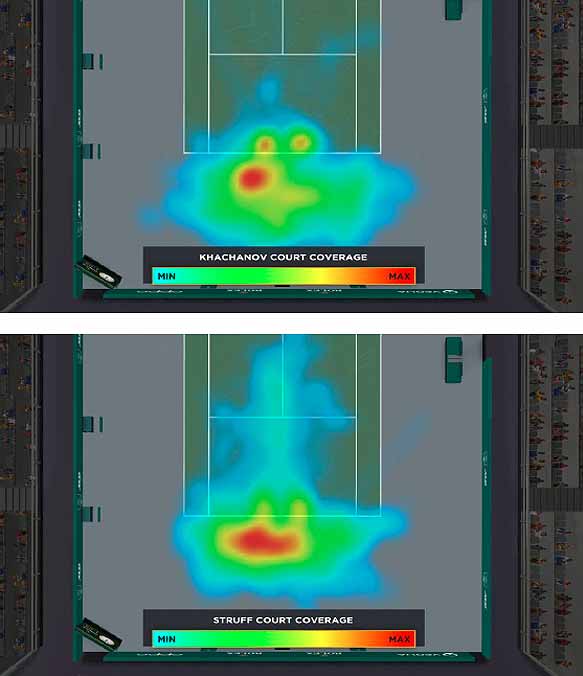 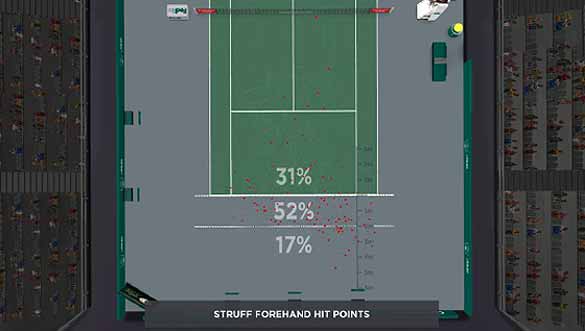 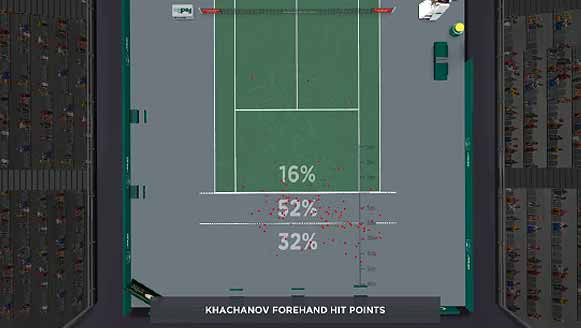 The German also denied Khachanov the opportunity to take big cuts on his second serve, directing more than half of all second serves into the Russian's body. 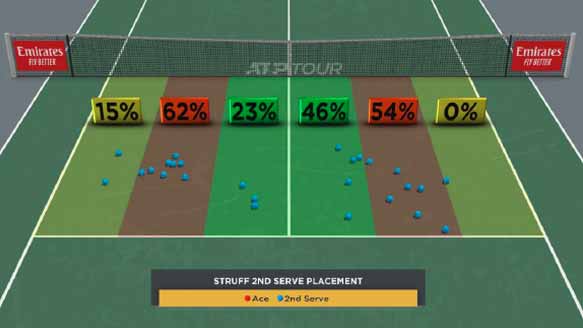 Earlier in the day, Taylor Fritz recorded his 30th match win of the year to beat fellow American Frances Tiafoe. Fritz saved one set point in the first set tie-break on his debut at the ATP Masters 1000 tournament and ultimately triumphed 7-6(6), 3-6, 6-4 in two hours and two minutes.

The 22-year-old Fritz led 4/1 in the tie-break, but Tiafoe won five of the next six points, only to mis-hit a backhand approach shot on set point. Tiafoe opened up a 3-0 lead in the second set and recovered from 1-4 down in the decider, only to be broken in the final game.

You May Also Like: Struff Has An Opinion, And Is Having His Best Season

Fritz, who captured his first ATP Tour title at the Nature Valley International (d. Querrey) in June, will next play fifth-seeded Greek Stefanos Tsitsipas, who has already qualified for next month’s Nitto ATP Finals in London.

Tiafoe, a five-time ATP Tour quarter-finalist this year, drops to a 21-25 match record and will now prepare for next week’s Next Gen ATP Finals in Milan.

Corentin Moutet, who came into the main draw as a lucky loser following the withdrawal of fellow Frenchman Richard Gasquet, made the most of his opportunity by beating Dusan Lajovic, this year’s Plava Laguna Croatia Open Umag titlist, 6-4, 1-6, 6-3 in one hour and 44 minutes.

“I'm very satisfied,” said Moutet, who had lost to Jeremy Chardy in the final round of qualifying on Sunday. “I tried to regain focus for this tournament, and I'm glad that I managed to get the upper hand and to continue on that path… My mind was not completely off the tournament. I was waiting until Wednesday to make sure that there was no empty seat for me.”

It was a first match win at an Masters 1000 tournament for the World No. 94, who will now face World No. 1 Novak Djokovic, the four-time former champion, in the second round on Wednesday.

When asked about facing Djokovic, the Frenchman added, “I don't want to say that I'm impressed by him or any other player. But I have a lot of respect for his career because he's been No. 1 for many years. He's won a lot of Grand Slams. He's managed to find his bearings and his place among the best. He is the best player in the world. He's No. 1 right now. He's very consistent. He often wins in tournaments. I will try not to be unworthy and to be better than him.”