Take a stroll through the grounds of the Generali Open Kitzbühel and you'll notice one common theme. Celebrating its 25th edition on the ATP World Tour this week, and 72nd in total, the tournament boasts a unique and fascinating heritage.

"Kitzbühel undoubtedly brings to tennis great heritage," said David Massey, vice president of ATP Europe, who presented the tournament with a 25-Year Commitment Award. "We are very proud to count the tournament on the ATP World Tour and today is an opportunity to recognise and thank them for the 25 years that they have been with us. As one of the jewels on Tour, we look forward to many more editions in this beautiful mountain town."

"This award is also dedicated to our previous presidents,” said Kitzbühel Tennis Club president Herbert Günther. “Receiving this award also shows gratefulness for the continuous work of the Kizbühel Tennis Club and all the helping hands and institutions around our tournament."

Nestled in the central European Alps in the Tyrol region, with the famous Hahnenkamm mountain - home to the world-renowned World Cup ski race - towering over the venue, the tournament is one of the more picturesque settings on the ATP World Tour. It all started when Europe was mired in conflict during World War II and Austria was occupied by the Russians, French, British and Americans. A British lieutenant stationed in Kitzbuhel declared that a tennis tournament would be organised in the town, with the four nations sending players to compete for the title.

Following the war, the Austrians continued the tradition, founding the Alpine Cup. It was highlighted by legends including Ken Rosewall, Lew Hoad, Roy Emerson, Rod Laver and Arthur Ashe. 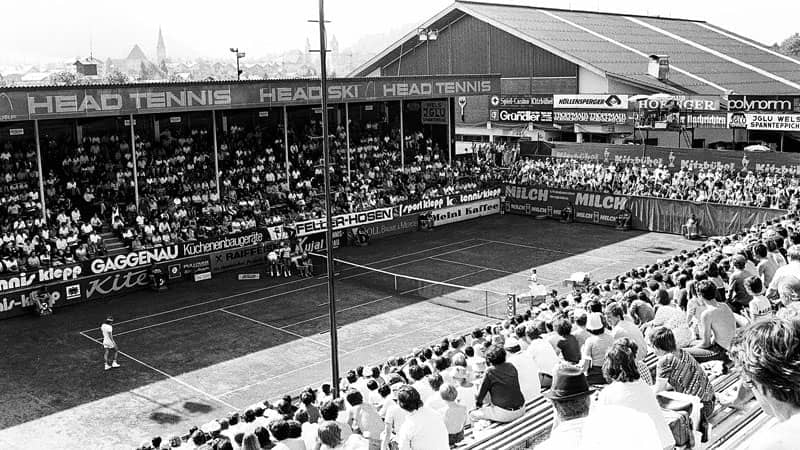 "This tournament went through some unbelievable times," added tournament director Alex Antonitsch. "The amazing spirit we have now goes back to Herbert, who came here as a student to control tickets and [tournament organiser] Markus Bodner, whose dad was one of the very first people working here for the tournament. They put so much heart and emotions into this event and it made it easy for me to say 'yes' to joining the team. It's really a family.

"Our focus is to promote players from the region in Germany, Austria and Italy and get fans back. We invested in young players like Dominic Thiem, who has been here from the beginning. It's his sixth year here now and we finally have a Top 10 player and it's our own player."

The event's storied past is evident in the large murals and black-and-white photos that decorate the sprawling public spaces, as well as the players' lounge, restaurant and Champions Club. With images of the old centre court and past champions Pete Sampras, Thomas Muster and Goran Ivanisevic on full display, the tournament's history remains an integral element in its burgeoning popularity and success.

“It means so much to me to play here,” said Thiem. “I’m 22 years old and it’s my seventh time already playing this tournament. It’s quite a lot. So many positive things have happened to me here. Now it’s my first tournament at home as a Top 10 player. As a tennis player, you don’t play at home very often. It means a lot to me.”

The Generali Open Kitzbühel is the first ATP World Tour event in 2016 to receive the 25-Year Commitment Award.