The Rotterdam Ahoy has been dressed for a TV audience this year.

ATP Staff
This article contains:
Tournament Director Richard Krajicek discusses how the ATP 500 has adapted for the COVID-19 era

Due to the COVID-19 pandemic, the appearance of empty seats at sporting venues across the world has become familiar over the past 12 months. But fans tuning into this week’s ABN AMRO World Tennis Tournament will notice a distinct change in Rotterdam.

The ATP 500 event has undergone a makeover ahead of its 2021 event, which will take place at the Rotterdam Ahoy from 1-7 March. The impressive indoor arena, which will also host this year’s Eurovision Song Contest, has been adapted to remove the sight of more than 16,000 seats and improve the experience for fans watching on TV.

The arena’s show lighting will create an intimate court atmosphere for both players and fans at home. Tournament Director Richard Krajicek took inspiration from the Nitto ATP Finals and the Next Gen ATP Finals for the new look.

“We have a TV product only,” said Krajicek. “We want to make it as nice as possible for TV.… We got the backdrop idea from the Next Gen ATP Finals. Five, six or seven years ago, there was a huge investment into our Centre Court. Everything was changed. The roof was changed, but also the lighting.

“We now have show lighting, which we can do everything with. Like at The O2, we can put a lot of lights on the court and the rest we can keep fairly dark. You can create a certain atmosphere. For the players, it is nice. They don’t see completely empty stands. The motivation was to make it as nice as possible to watch.”

This year’s event will also feature new, innovative player entrances. Through social media, fans will be able to send messages of support to their favourite players before each match.

”Next to the walk-on area, we have nine TV screens. Via social media, people can send messages to the players so when the players walk past there will be a message from their fans. It gives the players a feeling that the fans are still close,” said Krajicek. “We always get inspired by other events like the Nitto ATP Finals, with how they do their walk on and lighting. We just try to make it as interesting as possible for the people watching on TV.”

You May Also Like: Medvedev Learns Road To World No. 2, Ending Big Four's Streak

Fans familiar with the tournament will note that the ATP 500 has a tradition of celebrating its past champions on court. The event usually displays its honour roll around the centre court stands but, this year, the ring of champions has been moved courtside for greater exposure.

The location change will make it easier for fans to spot the past champions of the event, which include former World No. 1s Bjorn Borg, Jimmy Connors, Stefan Edberg, Boris Becker, Yevgeny Kafelnikov, Lleyton Hewitt, Roger Federer and Andy Murray. The honour roll also includes Krajicek himself. The Dutchman claimed the trophy in 1995 and 1997.

“We find it very important [to celebrate our past champions],” said Krajicek. “It is a nice feeling that when you win, straight away you see your name there… So many great players won the event. It is nice to be a part of it. I also won it twice. The only sad thing is that this year, I am on the left side of the board which covers 1974 to 1998. That is the side I am on now. I am not making the cut anymore. I am really getting old now.” 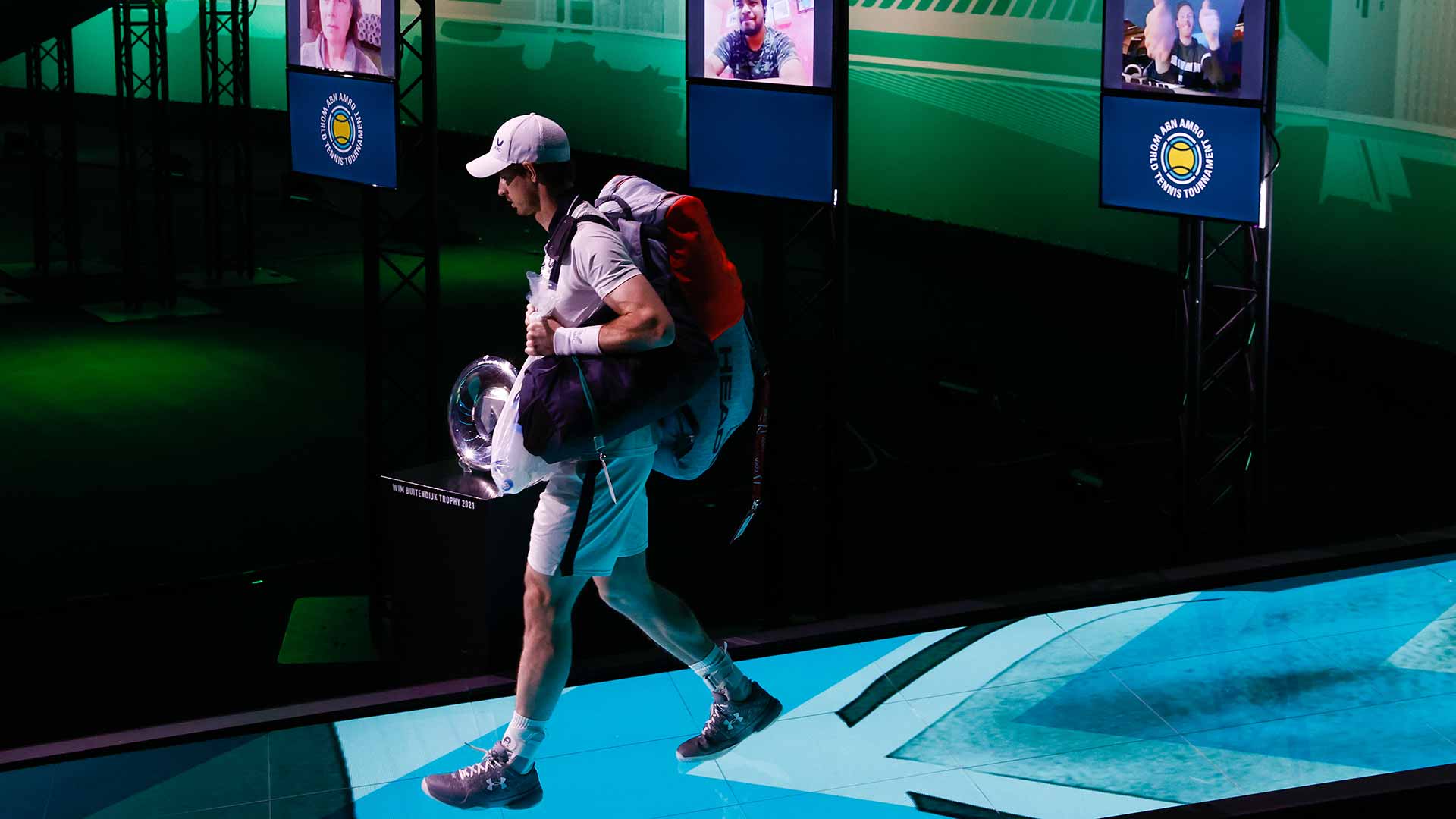 Andy Murray makes his entrance onto centre court. Photo: Pim Waslander/ABN AMRO World Tennis Tournament
Murray, who triumphed at the tournament in 2009, was immediately impressed with the venue adjustments.

“I like it a lot here. They’ve changed the whole setup. It’s a shame that the fans aren’t here, but I think they’ve done a great job with the centre court. They’ve made a real effort to try and create an atmosphere, which is difficult just now without the fans,” said Murray. “I think considering the circumstances they’ve done a really nice job for the players and big thanks to everyone involved.”

With a new-look event ready to stage its 48th edition, Krajicek is excited for the week ahead. The tournament will welcome eight of the Top 20 players in the FedEx ATP Rankings, including Australian Open finalist Daniil Medvedev.

“I am looking forward to great matches, exciting matches,” said Krajicek. “I hope we really have some memorable matches for people to watch on TV… Hopefully we have a great winner to put on the ring [of champions]. The most important thing is that we have very close matches and some big battles. That would be great.”