Josh Meiseles
This article contains:
From Challengers to the Roland Garros title in one year, it has been an unprecedented journey for Kevin Krawietz and Andreas Mies

In unison, Kevin Krawietz and Andreas Mies collapsed to the terre battue on Court Philippe Chatrier. With arms extended and pure ecstasy written on their faces, the coronation was complete. It was Saturday evening at Roland Garros and the Germans were celebrating their first Grand Slam championship.

Krawietz and Mies are undoubtedly relishing their first moment in the spotlight on a global stage. But to truly understand where they are today, it is important to realise how far they have come.

Flashback to the New York Open in February. It was early in the week and players were already braving the cold and blustery conditions as they ventured to Nassau Coliseum. On any given afternoon you could find them huddled within the toasty confines of the arena, and this day was no different.

Play had just concluded on the Grandstand and Krawietz and Mies were already on court, preparing for their opener the following day. They were dialed in from the start, prioritising returns and volleys on the indoor hard courts. British duo Luke Bambridge and Jonny O'Mara had arrived as well, waiting their turn to practise.

"These guys are really good," Bambridge exclaimed, motioning towards the Germans. "They've been killing it. Keep an eye on them."

It was the ultimate respect from one competitor to another. While Bambridge and O'Mara have been enjoying great success in their transition from the ATP Challenger Tour to the ATP Tour, Krawietz and Mies are making a considerable push of their own. The doubles circuit is a close-knit community, especially at the Challenger level, and both teams have been making a splash in the past year.

You May Also Like: Resurfaced: When Krawietz/Mies Made German Doubles History In Paris

In fact, the quartet has enjoyed the biggest ascents to the Top 50 of the ATP Doubles Rankings over the past 15 months. Where many teams hone their craft for years on the Challenger circuit, developing chemistry and seeking the spark that will carry them to the next level, it is quite rare to take the leap so quickly.

Having committed to join forces in April 2018, the 27-year-old Krawietz and 28-year-old Mies are redefining the transition from Challengers to the tour-level. Their ascent is unprecedented. While the majority of doubles stars ply their trade for years before lifting a Grand Slam or ATP Masters 1000 trophy, the Germans have carved their own unique path. 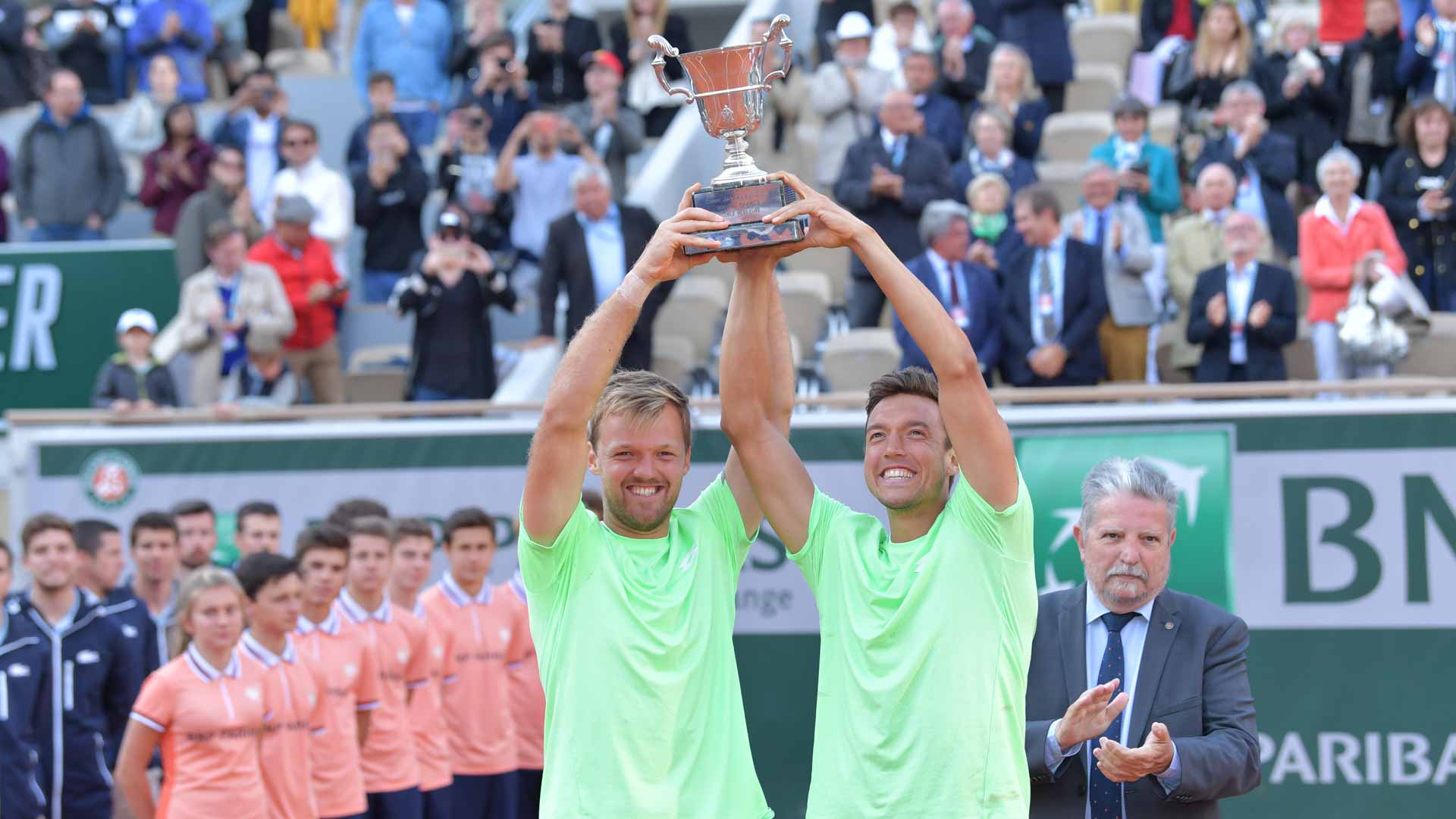 "You don't see many teams go from Challengers to ATPs in one year," Mies told ATPChallengerTour.com. "That was our goal when we started last year. It's crazy that we made it that quick in that short period of time. Our goal was always to try to win as many Challengers, but we had to be patient. We've been playing at a consistent level with consistent results. We worked our way up and we couldn't even get into ATPs at first.

"There are so many teams that stay in Challengers for many years and just can't move up. That's one thing we're proud of. We made it together from the Challengers to the ATPs. We didn't have to ask a Top 30 singles guy to play doubles just to try to move up. That's why Wimbledon [last year] was our big chance to get in through qualifying. We never had that opportunity to play a big event before that. We lost with match points against Bryan/Sock who went on to win the tournament. But that was a moment where we realised we had the level to beat all the top guys." 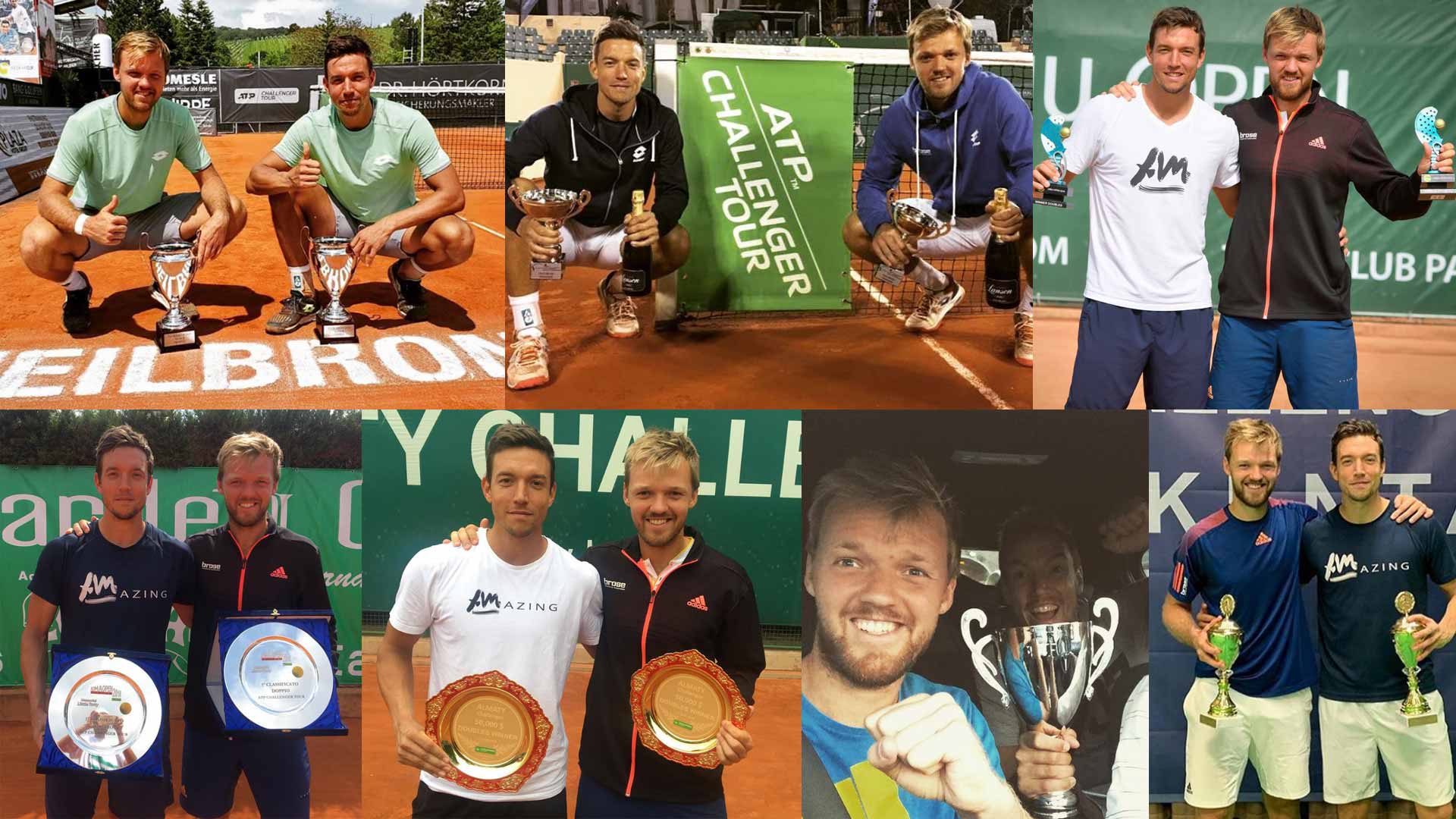 2018-19 Challenger titles for Krawietz and Mies.

Success on the doubles circuit often takes years to materialise. Former World No. 1 Jamie Murray is a superstar on today's doubles scene, enjoying multiple stints atop the ATP Doubles Rankings. But well before he reached the pinnacle and tasted Grand Slam success, the Brit was finding his way on the ATP Challenger Tour. Murray won 10 titles from 2006 to 2010 and it wasn't until 2015 that he reached his first major final.

Even the winningest doubles team of all time - Bob Bryan and Mike Bryan - took years to find their dominant formula. The Bryans won six Challenger titles in the late 1990s, before lifting their first of 16 Grand Slam titles at Roland Garros in 2003.

But, for Krawietz and Mies, the journey took on a much different shape. Three years ago, they were battling separately on the ITF Futures circuit, fighting to find their way to the ATP Challenger Tour. And it wasn't until 2017 that they had the opportunity to compete full-time in Challengers.

Mies was coming off a knee injury in early 2018, when they decided to join forces. And in just their third event of the year, they captured the crown at the Challenger in Rome, before notching titles in Almaty, Genova, Sibiu and Eckental. Their road to Roland Garros took them from Germany to Kazakhstan and Romania and back, enjoying success on both clay, hard and even grass. In their first appearances at Wimbledon, they not only qualified, but reached the Round of 16 and pushed eventual champs Mike Bryan and Jack Sock to a fifth set, succumbing 6-2, 6-7(2), 6-4, 6-7(5), 7-5.

As their first season together came to a close, with both players finally embedded inside the Top 100, the 'pinch me' moment arrived just as 2019 was getting underway. In the end, the hard work on the Grandstand court paid off, as Krawietz and Mies dominated the New York Open. They did not drop a set all week en route to their first ATP Tour title.

"The New York title was good timing, because we couldn't get into the Australian Open together and we had to switch partners," Krawietz said. "When we won in New York, it let us play together all the time. That gave us a lot of confidence and it was a great feeling.

"It wasn't easy getting here, knowing we had to get past the first and second rounds in Challengers to earn enough points that will move us up the rankings. We work hard every day, doing the same things and keeping the same routine. We have to do that to keep a high level, always working on things like returns and volleys. It's also not easy on our opponents. With some teams you say, 'okay I'll serve more to his forehand and his backhand'. I have a favourite side, but I'm pretty good on the other side too. There's not too much of a big difference."

But even with their first tour-level triumph in New York, the work on the ATP Challenger Tour was not complete. They would earn two more titles, in Marbella, Spain and Heilbronn, Germany, carrying them to Top 50 breakthroughs, ahead of their Roland Garros debut.

Jumps of nearly 100 spots to the Top 50 of the ATP Doubles Rankings - in just over a year - is a remarkable feat for players battling in Challengers. With 16-team draws and critical points up for grabs week in and week out, consistently reaching finals and winning titles is essential to team success. Projected to crack the Top 30 on Monday, the Germans are seeing the fruits of their labour.

"I would say after we won New York in February, we realised we belong on the ATP Tour," Mies added. "It's different when you think you have the level, but then when you go and do it, it's really special. It was only our third ATP Tour event in New York that we won. Usually teams take a few years to get to that point and we did it pretty fast. It's been a great journey for us and we hope to keep going."

When it's interview time right after the match. 📽️🤣