ATP Staff
This article contains:
Australian improves record for the season to 31-8 with opening win at ATP Masters 1000 event

Another week, another strong start for Nick Kyrgios in 2022.

The Australian improved his record in first-round matches this year to 11-0 with a 7-5, 6-4 victory against Alejandro Davidovich Fokina at the Western & Southern Open in Cincinnati on Tuesday.

Kyrgios, who reached his sole ATP Masters 1000 final in Cincinnati in 2017, struggled for consistency at times during his 90-minute win, but he was clinical in converting three of four break points during his maiden ATP Head2Head clash against Davidovich Fokina.

“He’s a tricky player, he’s so talented, he’s got so many shots at his disposal,” said Kyrgios after the match. “So I knew that I just had to serve well and then dictate as much as I can. His backhand is incredible. It was a tricky match."

The INSIGHTS In Attack statistics for the match reveal the extent to which Kyrgios tried to stay on top of Davidovich Fokina during rallies. The Australian struck the ball from attacking positions 33 per cent of the time, the third highest In Attack rate of the tournament so far. 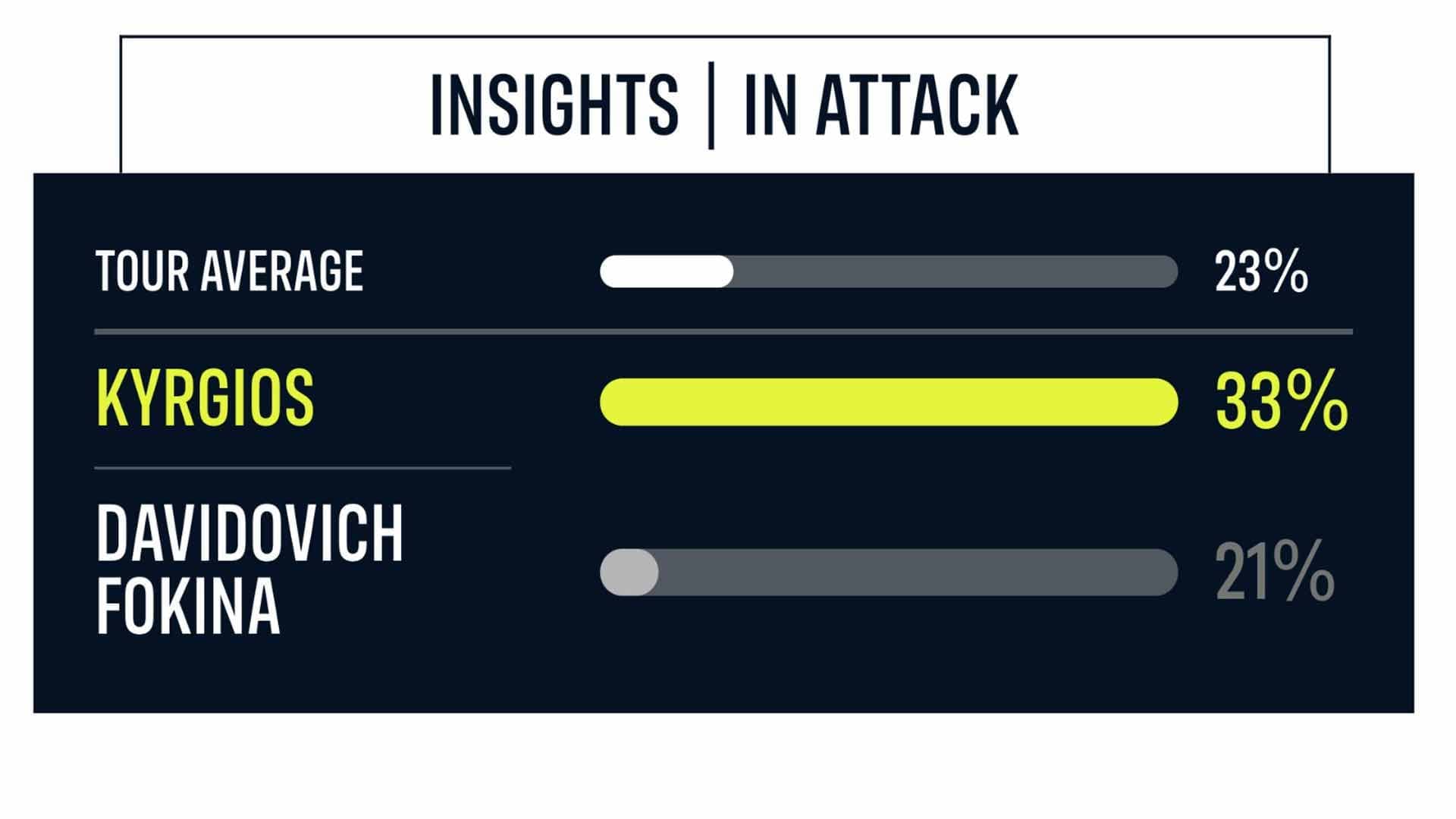 Kyrgios had enjoyed a nine-match winning streak prior to his defeat last week to Hubert Hurkacz in the Montreal quarter-finals. The Australian was happy to immediately return to winning ways, despite having to make some adjustments in his first match in Cincinnati since 2019.

“The conditions are a lot different here to Montreal,” said Kyrgios. “It’s more lively, harder to hit the ball in, but I responded well and returned well today. Hopefully I can keep it going."

After clinching the sole break of the first set in the 11th game to move ahead, Kyrgios looked to have all the momentum as he broke again in the first game of the second set. The Australian’s focus was tested as the resilient Davidovich Fokina immediately struck back for 1-1, but Kyrgios responded with a high-quality return game that included some searing hitting from deep.

“You just have to continue to keep pushing and keep trying,” said Kyrgios of his reaction after dropping his serve. “I didn’t feel the best physically, a bit worn out with everything, but I just mentally played the big points well. I got broken back, but I used that energy to push returns in and then force another break. It’s not easy out here, so I’m happy with that.”

The 27-year-old Kyrgios lifted his seventh ATP Tour title in Washington nine days ago. The Australian did not lose his serve once that week in the U.S. capital, and he will face another player with a big delivery in the second round in Cincinnati: 11th seed Taylor Fritz. The American cruised to a 6-1, 6-1 first-round win against Sebastian Baez.