As of Saturday night, Nick Kyrgios had only one racquet to use for the Citi Open final in Washington, D.C.

Jonathon Braden
This article contains:
Aussie was set to play the Citi Open final with only one racquet until...

Nick Kyrgios was 19 ½ hours away from one of the biggest moments of his career, playing in the Citi Open final in Washington, D.C.

But after his semi-final win on Saturday night, Kyrgios realised he had a slight problem. He had only one racquet.

The Aussie arrived in the U.S. weeks ago with five. But he donated one to an Atlanta charity, broke two during on-court tirades in Washington and the other racquet wasn't fit for match use.

Some players walk on court with a dozen racquets before any match, let alone a final. But Kyrgios had only one.

Earlier, he had asked his dad to send five more from Canberra, Australia. But, on Saturday night, the handful of sticks were stuck in customs at FedEx's Washington Dulles International Airport distribution centre and scheduled for a Monday delivery, too late for Kyrgios to use them for the 5 p.m. Sunday final. The centre was closed on Sunday.

At 9:30 p.m. Saturday, Kyrgios' team texted Tournament Manager Mark Ein, explaining the situation and asking for help. Is there anything you can do?

More On Kyrgios In Washington
Murray On Kyrgios: 'He's Brilliant For Tennis But...'
Match Point Teamwork: Kyrgios Asks Fans, Where Should I Serve?
Kyrgios Beats Medvedev For Washington Title

Ein, a longtime entrepreneur and investor in D.C., knew just who to contact. FedEx has been a longtime supporter of the ATP 500 event, and for years, Ein has been friends with Gina Adams, FedEx's Senior Vice President of Government Affairs. He called Adams to see what she could do.

But she didn't answer. Ein texted, nothing. He e-mailed. Still no response.

Kyrgios and his team went to bed the night before the final thinking there was a chance he would have to take the court with only one racquet, although they had enacted one other backup plan. Kyrgios' brother, Christos, had one of Nick's racquets in the Bahamas and was flying in Sunday afternoon.

Of course, you don't play with two or five racquets. Having only one for the final, in theory, wouldn't be a problem, so long as everything went perfectly: Kyrgios behaved himself, no strings popped and he didn't have a freak slip on the court or a funny landing that caused the racquet to break.

“Obviously playing a final you want to go out there with more than one,” Kyrgios told ATPTour.com.

But by 6:30 a.m. Sunday, they had reason for hope. Adams, who had been traveling and was in Copenhagen, got back to Ein. 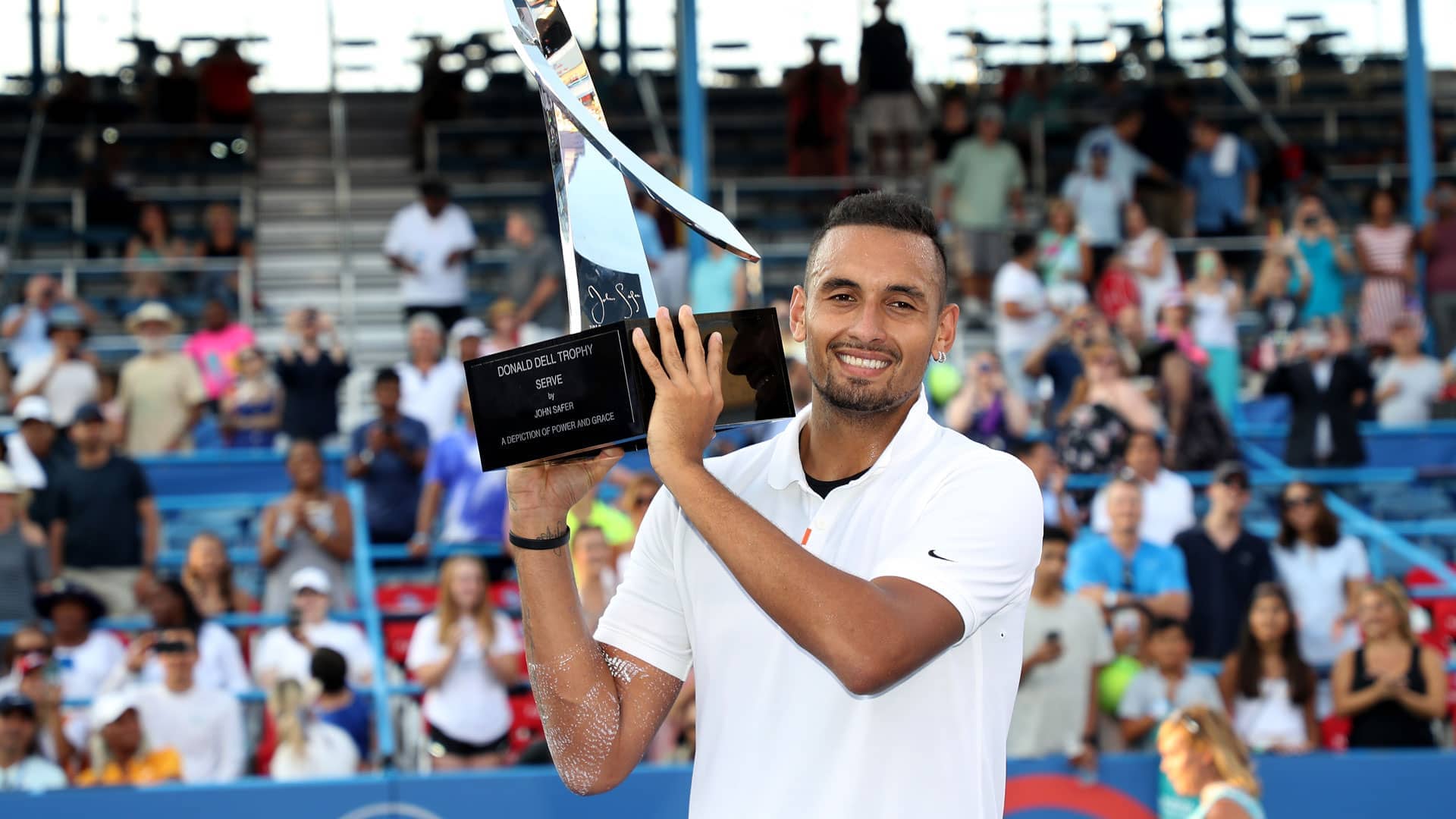 “We're on it,” she said. She asked him for updates to track the FedEx delivery.

Two hours later, by 8:30 a.m., the racquets were released from the centre and sent to the tournament site. By 9:30 a.m., they had arrived at the Rock Creek Park Tennis Centre, and the racquets had been strung and were ready for Kyrgios to use for his second ATP 500 final of the season by 10:30 a.m., six and a half hours to spare.

“I was so happy we could get that done for Nick, and I think they were really appreciative of it,” Ein told ATPTour.com. “It's our philosophy to do whatever it takes to help the players perform at their best, really whatever it takes.”

Ultimately, Kyrgios didn't need a bundle of racquets to beat World No. 10 Daniil Medvedev and win his second ATP 500 title of the season and the sixth ATP Tour title of his career. But when Kyrgios takes the court, it's always best to be prepared.

“[Ein] was able to pull some strings for me, and that was massive honestly for FedEx to make an exception and get me some racquets for the final, which was awesome. I'm super thankful to Mark and to FedEx,” Kyrgios said. “Everything happens for a reason. I got the racquets and got the W.”