Nick Kyrgios looks for his second win over Rafael Nadal this season.

Kyrgios On Nadal Clash At Wimbledon: 'You Want To Play The Best Players'

ATP Staff
This article contains:
Aussie seeks second victory over Nadal at The All England Club

It’s no secret that Nick Kyrgios likes facing big players on big courts. After a five-set opening-round win on Tuesday over fellow Aussie Jordan Thompson, he earned the right to face two-time Wimbledon champion Rafael Nadal in a match where all eyes will be on him.

But while some players might be disappointed to meet the World No. 2 early in a tournament, Kyrgios said he relishes the opportunity.

“As soon as the draw came out, I was super happy that I saw him in my section. It’s more exciting,” said Kyrgios. “When you're a kid, you want to play the best players in the world on [what] I think is the best court in the world. This is something that I can't take for granted. There's no guarantee I'm going to be here again in this position. I’m going to grasp it with both hands, go out there and give it my best shot.”

You May Also Like: Nadal Sets Blockbuster Kyrgios Clash At Wimbledon

But given his 11-9 record this season, he knew better than to look past Thompson. Kyrgios arrived at the All England Club with a title run this March in Acapulco that included wins over Nadal, John Isner and Alexander Zverev in the championship match. But the Aussie has gone 4-6 since then and required more than three hours against Thompson to pick up his first five-set victory Wimbledon 2016 (d. Brown).

“I knew that Thommo has been playing very well. He was more than capable of winning today,” said Kyrgios. “There were a couple moments that if they went his way, he could have easily been the one in this chair.”

Kyrgios and Nadal are even in their FedEx ATP Head2Head rivalry at 3-3, but the Aussie won their most recent clash this year by saving three match points in an epic second-round battle in Acapulco. Four of their six previous matches have taken place before the quarter-final stage, when the Spaniard is arguably more vulnerable before he sinks his teeth into the business end of tournaments.

The 24-year-old also prevailed in their lone grass-court meeting five years ago at Wimbledon. A teenage Kyrgios made full use of his wild card by shocking Nadal in the fourth round. The win made him the first male debutant to reach the quarter-finals at this event since Florian Mayer in 2004 and it remains one of his fondest memories.

“I've looked back on that moment. That's never going to leave my tennis career,” said Kyrgios. “It was one of the most special moments I've ever had.” 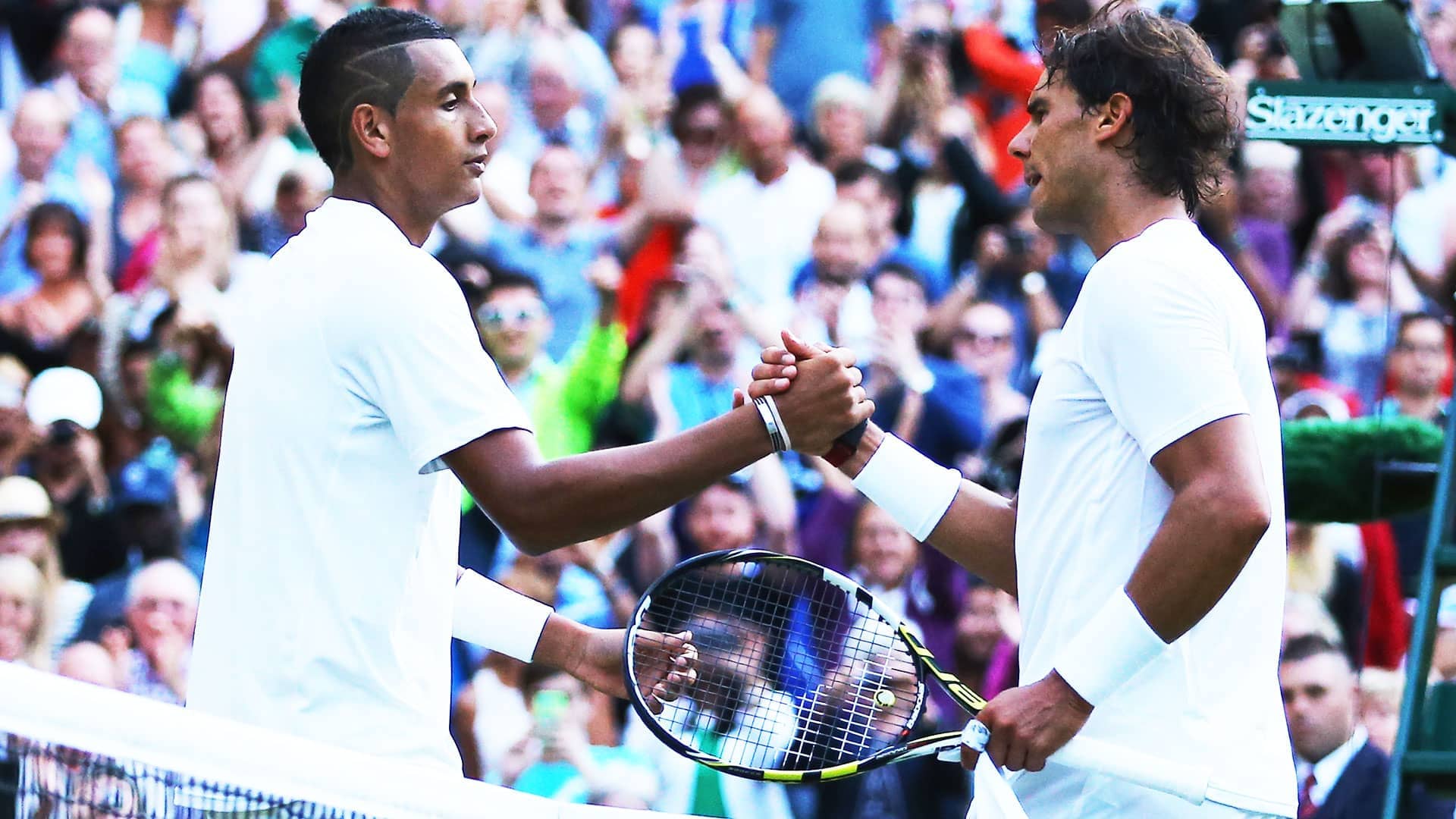 Despite his previous success against Nadal, the Aussie is downplaying expectations for another major upset. He declared the Spaniard the favourite based on his track record of success and said anything less than his best tennis would result in defeat. But given his love for the spotlight, it's safe to say that win or lose, Kyrgios will put on a show.

“He's one of the greatest tennis players of all time. I go into that match as an unbelievable underdog. I know if I play the right type of tennis, I can have success against him,” said Kyrgios. “I have to come with the right attitude and be willing to fight. If not, it's going to be butter for him… I need to rest and recover. I have a day out, then I want to go out there and have some fun.”