Novak Djokovic wins a singles match against Frances Tiafoe and a doubles match alongside Matteo Berrettini on Saturday in London.

ATP Staff
This article contains:
Berrettini and Djokovic both win twice on Saturday

Novak Djokovic made a winning return to Tour on Saturday at the Laver Cup, dispatching Frances Tiafoe 6-1, 6-3 and then partnering Matteo Berrettini past Alex de Minaur and Jack Sock 7-5, 6-2 to give Team Europe an 8-4 lead against Team World in London.

The Serbian was competing for the first time since July, when he won his 21st Grand Slam title at Wimbledon. However, he showed few signs of rust, striking his watertight groundstrokes with fierce accuracy against Tiafoe to earn his 24th tour-level win of the season after 73 minutes. 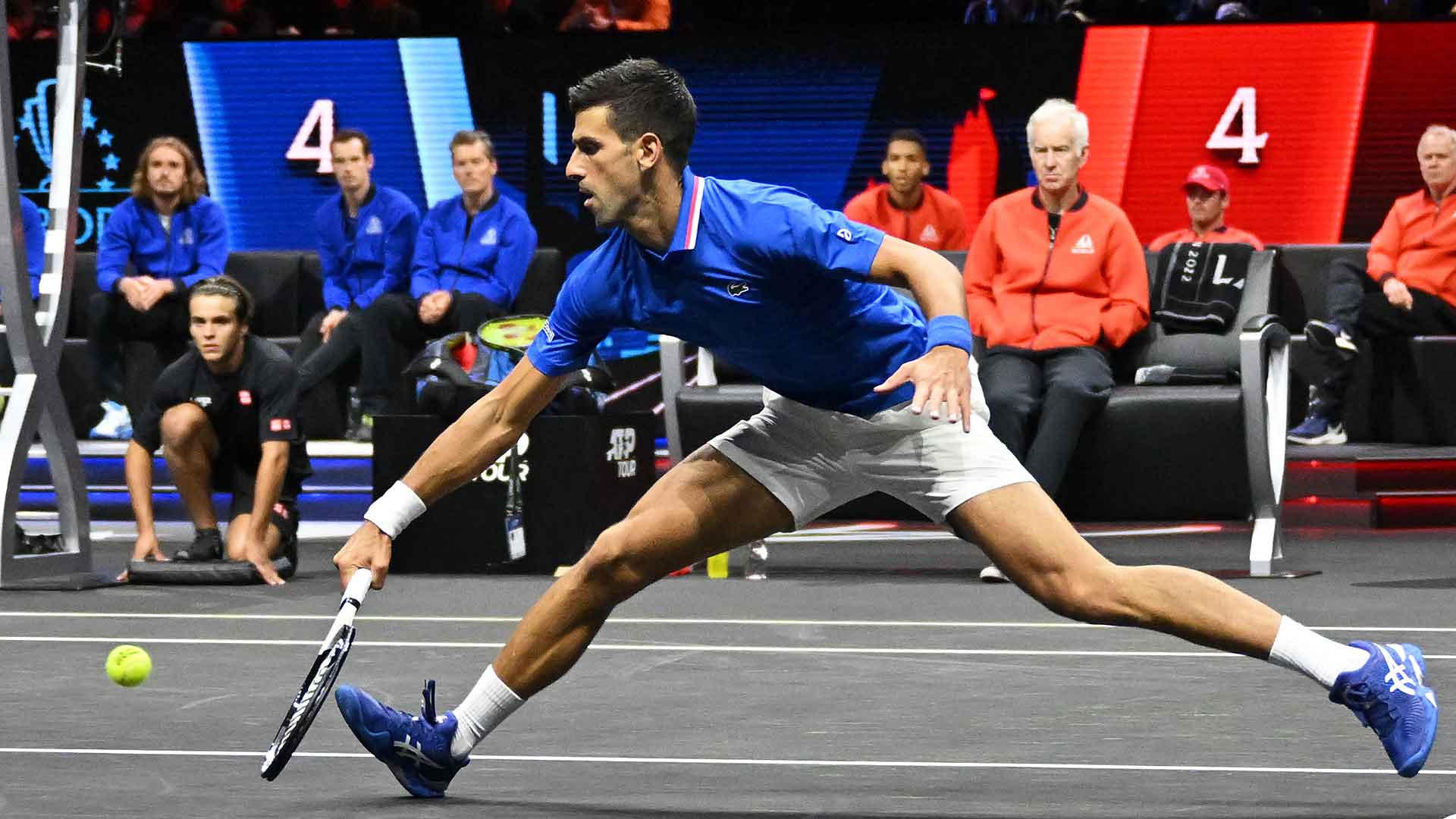 Photo Credit: AFP/Getty Images
Djokovic now holds a 1-1 singles record at the Laver Cup, having lost his only previous match at the three-day event against Kevin Anderson in 2018.

The American Tiafoe, who reached his first major semi-final at the US Open, teamed with Jack Sock to defeat Roger Federer and Rafael Nadal in the Swiss star’s final tour-level match on Friday night. However, he struggled to match Djokovic’s heavy-hitting in their second ATP Head2Head meeting, with the former World No. 1 moving to 2-0 in their ATP Head2Head series.

Djokovic quickly returned to the court for his win with Berrettini. It was their first time competing together, and they earned four service breaks against Team World.

“First time, but definitely not the last time, at least for me," Djokovic said in his on-court interview. "I enjoyed it a lot. Perfect team, I guess. I don’t play doubles as much, so it’s a completely different game.”

In the first match of the day, Berrettini fired Team Europe in front against Team World, edging Felix Auger-Aliassime 7-6(11), 4-6, 10-7.

In a hard-fought battle, the Italian caused damage with his aggressive forehand, while he hit his backhand slice with great depth to keep the Canadian at bay. The World No. 15 saved one break point in the first set, before raising his level on serve in the Match Tie-break to seal his victory after two hours and 15 minutes.

“It is always a great fight against Felix,” Berrettini said in his on-court interview. “We played for two hours and 15 minutes and he is a hell of a player. I had to play my best tennis in the [Match] Tie-break to win. I am really happy because I didn’t win just for me but for the team.”

Berrettini now leads Auger-Aliassime 4-1 in their ATP Head2Head series, having defeated the 22-year-old at the Laver Cup last year.

You May Also Like: The Grit & Grace Of Roger Federer

In the latest chapter of their rivalry, Fritz flew out of the blocks to storm ahead. The World No. 12 stepped inside the baseline to dictate the baseline exchanges, striking 11 winners in an impressive first-set performance. Norrie refused to go away, though, flattening out his forehand as he changed up the chess board to level.

However, Fritz would not be denied, edging a tight Match Tie-break to triumph after 89 minutes. Four of the six matches at the Laver Cup have gone to a deciding set at this year's event.

The American now leads Norrie 6-5 in their ATP Head2Head series, avenging his defeat against the Briton at last week’s Davis Cup Finals. Fritz is making his second appearance at the three-day event, having gone 1-1 in 2019.

Captain Bjorn Borg is aiming to guide Team Europe to its fifth consecutive Laver Cup title against John McEnroe's Team World this week in the U.K. capital. Djokovic will compete with Berrettini in the final match of the day. The pair will play Alex de Minaur and Sock in front of a capacity crowd at The O2. Each victory on Saturday is worth two points.