Lugano Calling: How The Challenger Tour Returned To Switzerland

This week, the ATP Challenger Tour is back in Switzerland after seven years. The inaugural Challenger Citta di Lugano has arrived, marking the return of the circuit to the European nation for the first time since 2014.

Then, it was the city of Geneva that hosted an indoor hard-court event for nearly three decades. Now, the picturesque mountain town of Lugano is targeting an extended stay of their own on the ATP Challenger Tour.

Switzerland is no stranger to high-level tennis, hosting both the Swiss Open Gstaad and the Swiss Indoors Basel for more than 50 years on the ATP Tour. But on the Challenger circuit, tennis has been absent from the country in recent years. As younger players, like surging Swiss teens Dominic Stricker and Leandro Riedi, seek to develop and grow their games, the tour provides the ideal training ground.

This is exactly why Riccardo Margaroli and his son - doubles No. 142 and the top Swiss doubles player in the world - Luca Margaroli, decided to embark on this endeavor of bringing Challenger tennis back to their country. Riccardo is the tournament director this week in Lugano.

"It all started from my idea," said Luca. "I then involved my father, the city of Lugano and the Swiss federation, because I think it’s important in this moment to give the younger generation the chances to compete at the higher level. They have the talent and they proved it this week in Lugano. For me to play at home with my family involved in the event was really good. Unfortunately with the COVID restrictions we didn’t have spectators, otherwise the atmosphere at home would have been fantastic."

As Riccardo and Luca outlined, the goal of bringing Challenger tennis back to Switzerland is to provide more competitive opportunities to the next generation of Swiss players. This week, Stricker and Riedi have taken full advantage. 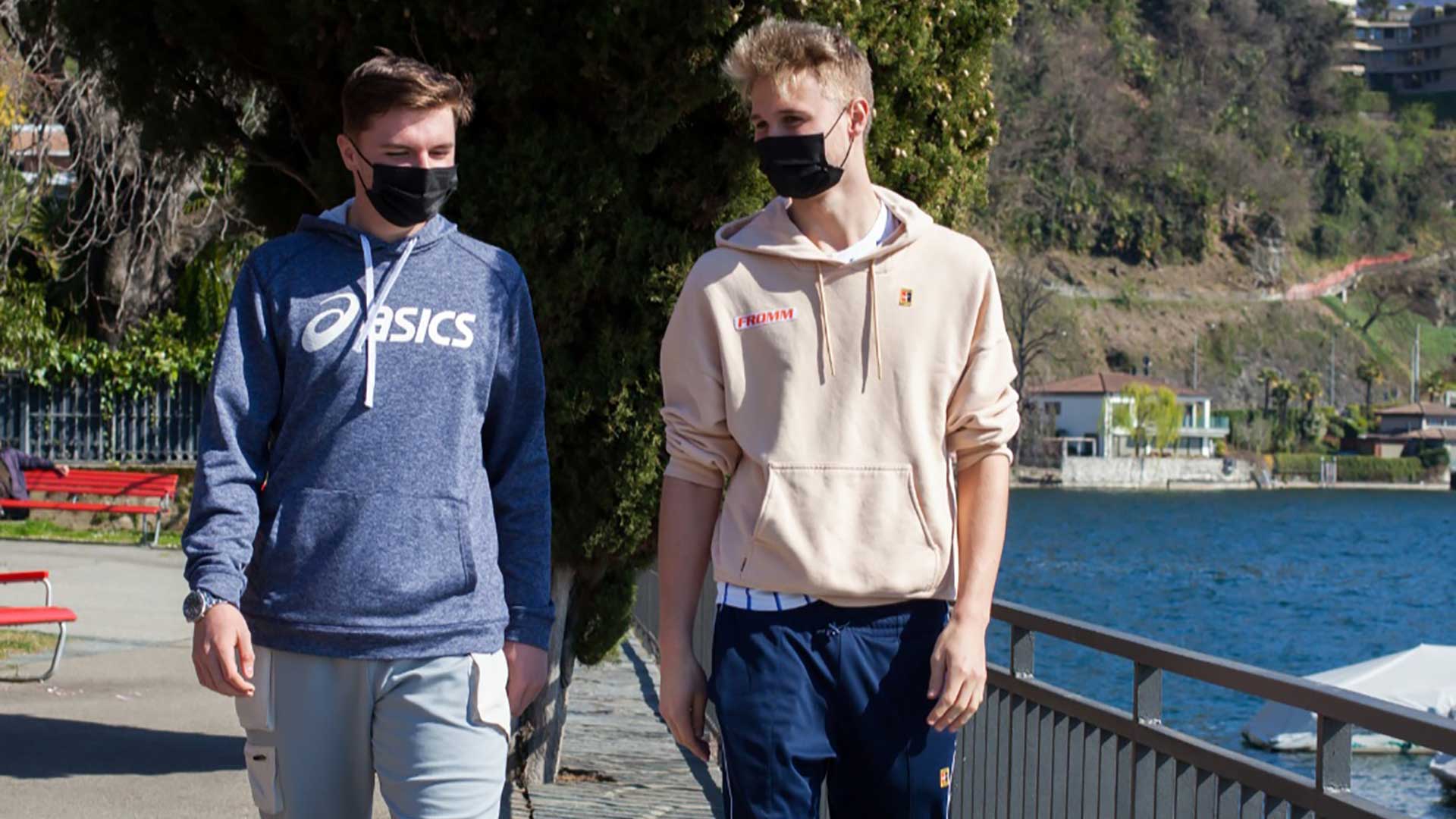 Stricker (left) and Riedi in Lugano

Last year, Stricker defeated his countryman in a historic all-Swiss final at Roland Garros juniors, and now the pair are embarking on their professional journeys in 2021. Making just his second appearance on the ATP Challenger Tour, the 18-year-old Stricker has made a big splash in reaching the semi-finals. And in his Challenger debut, 19-year-old Riedi also impressed, upsetting Adrian Menendez-Maceiras for his first victory at the level.

"I think it's amazing to have a Challenger here in Switzerland," said Stricker. "We are all enjoying playing here in Lugano. It's a good opportunity for me, for all of us, including the juniors and all the Swiss players. I think it's great to have a tournament and I'm already looking forward to come back next year. It's been hard with all the COVID restrictions, because there were not so many spectators, but it's actually been a pretty good atmosphere. There were some people watching the third set and it helped me. It is a pretty good and I hope to keep going and get as far as I can."

"It's great to have a Challenger here in Switzerland after so many years," added Riedi. "It's such a good chance for us young players to compete against strong competition. It's really nice. I won my first Challenger match this week. It was a long match, but really good for me. I was realizing that at this level the players never let go and they always fight point after point. It was just a cool experience." 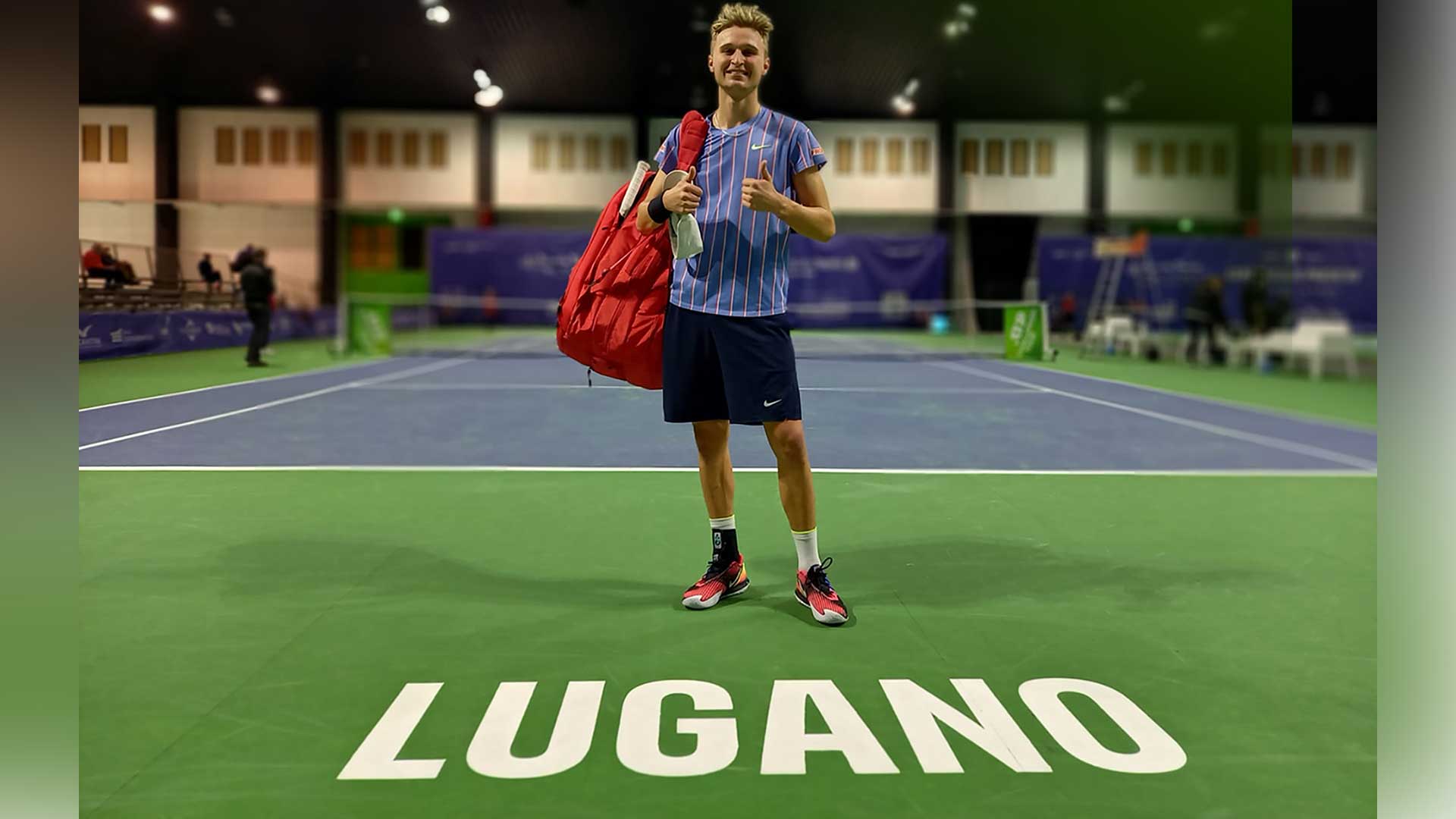 Embedded in the Swiss-Italian Alps, Lugano is one of the more idyllic cities in all of Switzerland. The stunning location provides an incredible setting for world-class tennis, with players competing all week at the Padiglione Conza. Located just one hour north of Milan, the city is nestled in southern Switzerland's Italian-speaking Ticino region. A culturally diverse melting pot, Lugano's Swiss-Italian mix is reflected in its cuisine and architecture.

From 1999-2010, the city hosted a tournament on the ATP Challenger Tour, with future Top 10 talents Guillermo Coria and Stan Wawrinka among its champions. At the time, the tournament was held on outdoor clay. Now, the balls are flying on the lightning-fast indoor hard courts at the Padiglione Conza, a convention center in the heart of Lugano.

"The idea of organising a Challenger tournament was born after we established a Swiss master event at our tennis school in Cadro, Lugano," said Riccardo Margaroli. "The tournament, organised during the lockdown, had the aim of making up for the lack of competitions due to the arrival of the coronavirus.

"We have to thank the ATP, who was very close to us in the construction of this Challenger tournament, as well as the sponsors who had already supported us during the Swiss master and in particular the Swiss Federation, Banca Stato, the city of Lugano and Lugano Region. Our main partners immediately understood the importance of this event in such a critical moment. I also want to thank the Marchesini sisters from MEF Tennis Events for having contributed to the organization of our first tournament here in Lugano."

The Margaroli family includes Riccardo, a former basketball player, mother Isabella and their three children, all tennis players: Camilla (30), Silvia (26) and Luca (29). Together, they manage the Scuolo Tennis by Margaroli, a local club in Lugano, which is the largest facility in the Ticino region.