ATP Staff
This article contains:
Relive the history of the prestigious Spanish event

It is the 20th anniversary of the Mutua Madrid Open, which has developed into one of the premier events on the ATP Tour. Today Spanish tennis is widely considered a force, with players who will be remembered as legends. But the turning point for the Armada can be traced back to the tournament's arrival in Madrid two decades ago.

Carlos Moyà became their first man to reach No. 1 in the ATP Rankings in 1999 and the Spaniards claimed their first Davis Cup in 2000, putting the country firmly on the global tennis map for the first time since its great pioneers wielded their wooden racquets. With four-time Grand Slam champion Manolo Santana as the project’s visible figurehead, the city of Madrid purchased the licence that was then owned by Stuttgart to bring the event to the Spanish capital. The city had itself a Masters Series competition (then the name of the ATP Tour’s top-tier tournaments) in October.

Forming part of the indoor swing, played on hard courts in the Rockodrome in Casa de Campo, a picturesque corner of the Spanish capital, the tournament bolstered Spanish tennis’ international clout. It was one of nine Masters Series on the men’s calendar. One of the most powerful nations on the courts finally had an event to match in the ATP Tour’s top category.

Countless greats graced its courts at the turn of the century. Following in the footsteps of its first champion, Andre Agassi, Madrid became accustomed to watching legends of the game play season after season. In 2003, Juan Carlos Ferrero entertained his home fans as the world’s No. 1 player and greatness was becoming a genuine part of the collective Spanish imagination. From then on, the stars kept returning to Madrid.

In 2005, Rafael Nadal, a 19-year-old teenager starting out on his path to glory, earned his first Madrid title with an epic comeback in the final against Ivan Ljubicic. In 2006, Roger Federer entered the winners’ circle in a reflection of the calibre of the tournament. The first seven editions on hard court served to establish Madrid as a mainstay event and one of the biggest and most coveted titles on the men’s professional calendar.

A fundamental change for the tournament came in 2009. With the restructuring of the ATP Tour and the arrival of the ATP Masters 1000 category, Madrid took a giant step towards its current state. In a country with a long tradition on clay, the tournament moved from October to May and from hard court to the red dirt in the heart of the European clay swing. Madrid took the spot that had been occupied by Hamburg since the 1970s, ratifying its position as a key stop on Tour.

In addition, in a move that grew the tournament beyond the boundaries of the ATP Tour for the first time, the event added a women’s competition. That made the Mutua Madrid Open one of the world’s biggest mixed events.

Another key step came two years later. The altitude of Madrid, at almost 600 metres above sea level, has always given the event its own unique characteristics. The added ball speed complicates ball-striking for players who favour an attacking game. This peculiarity led Madrid to move its start date forward, to the week before the Rome tournament, in order to provide a more similar setup immediately before Roland Garros.

Madrid had fashioned four facets that are key for the success of any tournament: tradition (with a decade of history now behind it on Tour); an ideal surface for fans who were used to watching clay-court tennis; a favourable position on the calendar and, perhaps most important of all, a first-rate venue in the Caja Mágica.

At a time when Madrid was making a strong bid to host the Olympic Games, with candidacies presented for 2012 and 2016, a majestic sports complex was erected on the banks of the River Manzanares. Boasting three stadiums with retractable roofs and the stunning 12,500-capacity Manolo Santana Stadium as its centrepiece, flanked by the Arantxa Sánchez Stadium (3,500 seats) and Stadium 3 (2,500), Madrid had itself a venue that was the envy of the Tour and was able to complete every year’s competition with scant concern for the weather.

The Mutua Madrid Open had become an iconic event for the Spanish capital, with an annual economic impact of more than 100 million euros, preserved by the various governments that have occupied the City Council. In a city that is home to some of the world’s best sports clubs, tennis had firmly laid its foundations and elevated its position in society.

If the event is known for one thing, it is its willingness to innovate and convert a traditional sport into an opportunity for fearless innovations. In 2012, the momentous arrival of the blue clay was a burst of creativity on the circuit, breaking the mould of the classic red clay and generating a revolution for television broadcasts. Better contrast between ball and court made Madrid the focus of the world’s attention in an edition that was dominated by the huge talents of Federer, the only player to have won the tournament on three surfaces (indoor hard court, red clay and blue clay).

In a country with a long tradition of sporting heroes, the legend of Nadal has outshone them all. With a total of five crowns, the Spaniard has managed to adapt his greatness to the special conditions of Madrid. From earning his first crown on the indoor courts as a teenager to his four titles on the Caja Mágica clay (2010, 2013-14, 2017), the Balearic Islander has been an essential driving force behind the Mutua Madrid Open’s status as one of the biggest events in Madrid. The packed stands of the Madrid Arena and the Manolo Santana Stadium have witnessed the arrival, consolidation and maturity of a global sports icon.

You May Also Like: My Point: Lopez's New Journey

Over its 20 years of history, the Mutua Madrid Open has sought to define itself through attention to detail and determination. In the 2019 season, Feliciano López took the baton from Santana as the tournament director. Santana’s great legacy includes achieving one of his main goals when the event began in 2002 — having a tournament worthy of the greatness of Spanish tennis. From then on, with Santana becoming the Honorary President, the responsibility lay on the shoulders of López, still an active player and one of the most experienced on Tour.

As two great decades of tennis come to a close this week, Madrid has a huge party to look forward to and a great future ahead of it. Having recently signed a deal with the Madrid City Council to hold the tournament until at least the 2030 season, Santana’s dream will continue to deliver with the same verve as it has done since its early years.

A Historic Semi-final
Nadal and Djokovic produced an unforgettable, record-breaking match in the 2009 Mutua Madrid Open. In the first edition played on the Caja Mágica clay, the Spaniard and Serbian played the longest three-set match of all-time. Their battle lasted four hours and three minutes with Nadal emerging victorious 3-6, 7-6(5), 7-6(9). The magic had commenced in Madrid.

Nalbandian Does The Impossible
In 2007, David Nalbandian achieved one of the greatest feats in ATP Tour history. When Madrid was still held on indoor hard courts, the Argentine got his hands on the trophy by beating the top three players in the ATP Rankings — No. 2 Nadal, No. 3 Djokovic and No. 1 Federer — consecutively, in three days. Nalbandian is still the only player to have defeated Nadal, Djokovic and Federer in the same tournament. 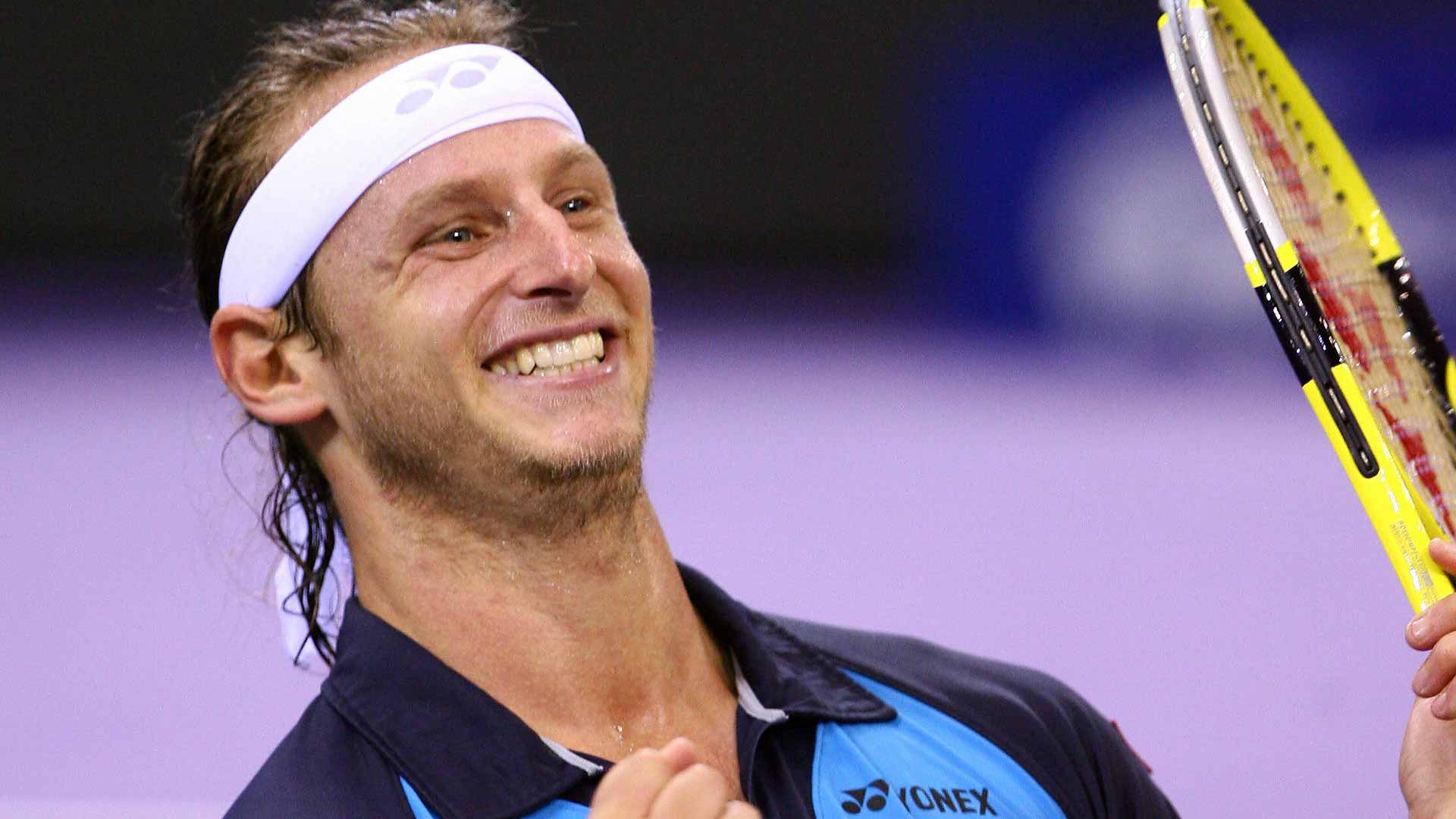 Photo Credit: AFP/Getty Images
Rafa’s First Win In Madrid
In 2005, aged 19, Nadal showed Madrid the spirit with which he would go on to build his legend. Under the roof in Casa de Campo, in a stadium packed to the rafters to support him in his first final in the city, the Balearic Islander made a seemingly impossible comeback against the Croatian Ivan Ljubicic 3-6, 2-6, 6-3, 6-4, 7-6(3) to claim his first title in Madrid. “It’s been the best week of my life”, Nadal said at the time.

The Big Three Dominate
Nadal, Djokovic and Federer have made Madrid a hotbed for their conquests. They are the only players who have won at least three titles in the Spanish capital and their stats leave little room for doubt. Since the tournament moved to the Caja Mágica, they have managed to win 11 of the titles, including the first six editions on clay.

Nadal Meets Alcaraz
The 2021 edition witnessed an emotional moment, the significance of which will only become clear with the passing of time. On his 18th birthday, #NextGenATP Spaniard Carlos Alcaraz faced Nadal for the first time in an official match, much to the delight of the Madrid fans. A packed Manolo Santana Stadium witnessed a potentially iconic moment for Spanish tennis. It was another page to add to the Mutua Madrid Open’s golden book of history.