Kamil Majchrzak and Hubert Hurkacz have known each other since they were nine years old.

Two years ago, Kamil Majchrzak was devastated at the ATP Cup. The Polish player lost his opening match at the team competition in three sets against Argentine Guido Pella and was unable to continue in the competition. Little did he know he would not compete again for more than seven months.

Majchrzak had broken his pelvic bone.

“It was very painful for me, because it was the first edition of the ATP Cup and I was playing matches for Poland. Matches for the country are with different emotions because you don’t only play for yourself, you also play for your colleagues, for your country,” Majchrzak told ATPTour.com. “It was very emotional for me. I finished the match, but it was a bad picture at the end and I could not play another game because I was injured for half a year.”

The Pole used one word to describe the injury: nasty. Majchrzak (My-shack) believes there was not “one shock” that caused it. He believes some areas of his body were not strong enough, and that ankle braces he wore were problematic.

“I needed to take the ankle braces off,” Majchrzak said. “Of course when I was moving, I was a little bit scared at the beginning. Then every other day I was feeling better and I had to do all the physical training again and tennis preparation as well, so it was a matter of time. It was not easy, but I managed.” 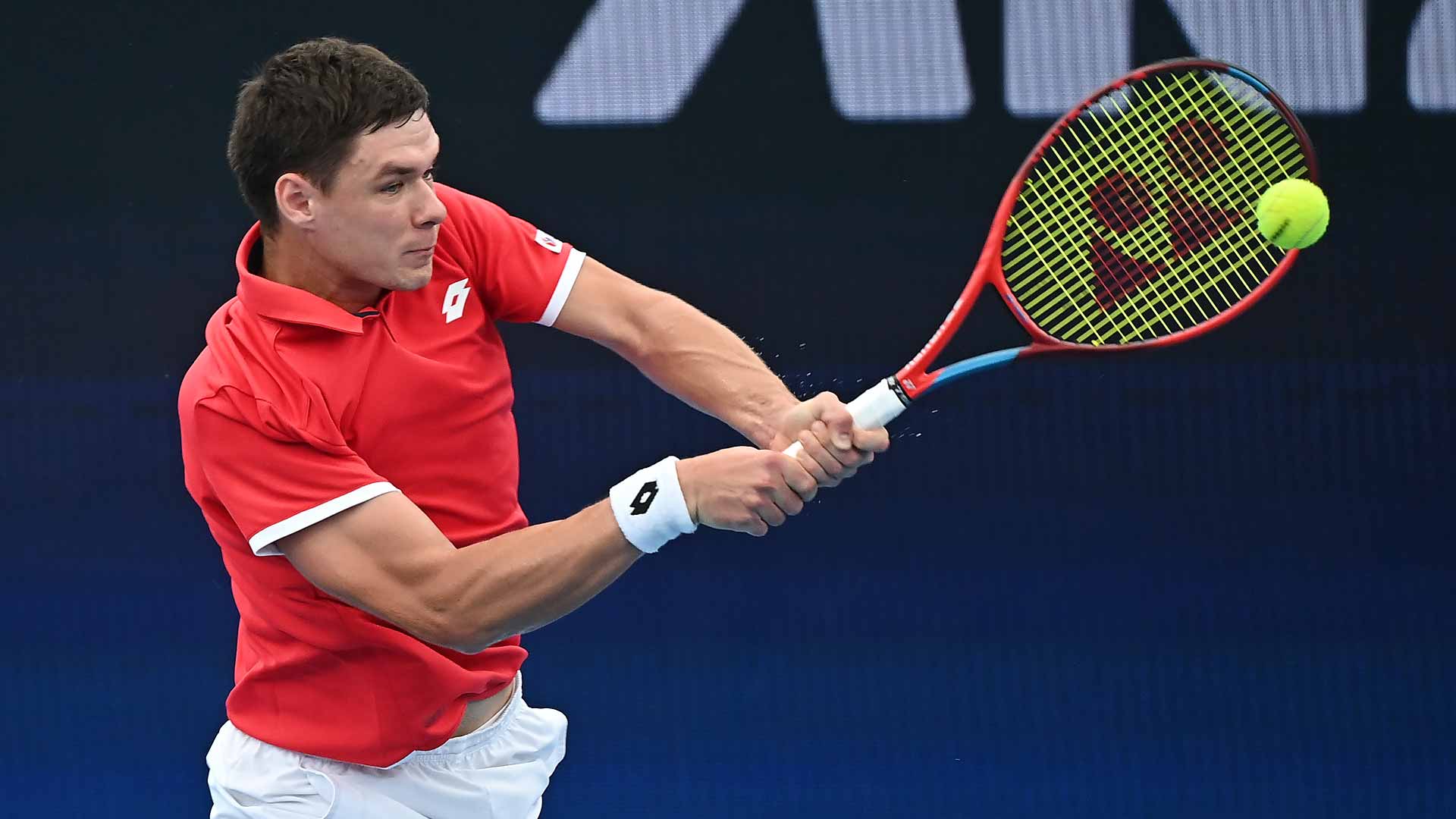 Photo Credit: Peter Staples/ATP Tour
Majchrzak is the No. 117 player in the ATP Rankings. But he has proven this week he is capable of playing at a higher level than that. It has just taken time to work his way back following his injury.

The 25-year-old went 3-0 at No. 2 singles in Group D to help Poland advance to the semi-finals, where the country will play Spain. Alongside Majchrzak has been World No. 9 Hubert Hurkacz. They have known each other since they were nine.

“It's great that we're doing it for our country. I mean, with Kamil, with Jan [Zielinski], with Szymon [Walkow], Kacper [Zuk], we've been seeing each other [at] the junior tournaments in Poland in some small towns and in the bubbles [that were] zero degrees celsius and now we are here,” Hurkacz said. “It's really great that we all like came for that journey and then we are here in the semi-finals right now, so it really means a lot to us.”

Majchrzak’s tennis journey did not start long before he met Hurkacz. He is the son of two school teachers with no background in tennis. The family never watched the sport on television. But a friend of Majchrzak’s mother taught tennis, so she took Kamil for a lesson when he was eight.

“I really enjoyed tennis from the first hit with my racquet,” Majchrzak said. “There was a mini tournament for the guys who started just like me, and I won it, so I said, ‘Okay I’m going to keep playing and playing and playing.’ That was it, I never stopped.”

Things were not easy for the family. There were no indoor courts nearby, so Majchrzak’s parents would drive him at least one hour each way after school just to be able to train. At nine, Majchrzak met Hurkacz.

“We’ve been practising together from time to time or playing tournaments or at least seeing each other at the tournaments from a very young age and at places where there were indoor courts that were zero degrees inside,” Majchrzak said. “Now we are here. He’s a Top 10 player in the world, so it’s a very inspiring friendship and I hope to keep it going.”

Majchrzak’s parents, Piotr and Karolina, may not have a tennis background, but according to their son, they provided him with something more important.

“All tennis players sacrifice a lot, but the parents and those around them also sacrifice the same amount of time, of passion, of everything. I’m very grateful that they gave me a shot.”

In the juniors, Majchrzak defeated current stars including Daniil Medvedev, Andrey Rublev and Matteo Berrettini. But unlike the others, it took him longer to blossom at the professional level. In 2019, the Pole broke out by qualifying for the Australian Open, where he pushed Kei Nishikori to five sets, Wimbledon and the US Open, where he made the third round of the main draw.

That year, Majchrzak cracked the Top 100 and climbed to a career-high World No. 83. But then the injury bug struck.

Just a few months after returning late in 2020, Majchrzak was looking for a coach, and his agent connected him with former World No. 7 Joakim Nystrom. They have worked together since December 2020.

“We get along together. Of course it’s important when you travel that you also have fun and respect each other,” Nystrom said. “He’s such a nice guy, always polite, always wants to do the right thing and in the past three, four months he’s also grown in confidence. He knows he’s a good player and that he has a good chance of beating the good players as well.”

Majchrzak will hope to show that again on Friday evening, when he is scheduled to play former Top 10 star Pablo Carreno Busta of Spain. No matter what happens, it will be a far different experience than his last at the ATP Cup.

“It’s a completely unexpected story,” Majchrzak said. “But a very nice one so far.”