Adrian Mannarino is looking to surpass his best performance (fourth round) at the Miami Open presented by Itau.

The Maturation of Adrian Mannarino

Jonathon Braden
This article contains:
Frenchman is trying to put past flare-ups behind him and be more calm on court

The clips are all over YouTube, moments Adrian Mannarino wished never would have occurred. There's the time he threw his racquet against the fence at the ATP Challenger Tour event in Lexington, U.S.A, causing a ball boy to flinch. Another time he lost his cool in Stockholm and lobbed his racquet across the court.

Plenty more exist, Mannarino knows, because that's how the Frenchman used to react to a missed forehand or a double fault.

“I was getting frustrated so easily just losing my serve once, missing one easy shot, and I was getting out of the match so quickly. Also, I was feeling like my opponents knew it,” Mannarino told ATPWorldTour.com.

His opponents thought, Mannarino said, “OK, I just have to keep going, and something is going to happen, maybe a ball boy is going to miss one ball, and definitely a bad call from the umpire, and he's going to go out of the match.”

The flare-ups affected his play. Before October 2017, Mannarino had spent only eight weeks inside the Top 30 of the ATP Rankings.

But that was then, Mannarino hopes, a time in the past that he has successfully put behind him. He's been working with a new coach for the past year, and he says he's calmer than ever – on and off the court. Last year, Mannarino made his biggest ATP World Tour final in Tokyo at the Rakuten Japan Open Tennis Championships, an ATP World Tour 500-level event.

You May Also Like: Jared Donaldson, Future Investment Banker?

This week, he's at a career-high No. 22 in the ATP Rankings, and the 29-year-old, who's in his 15th year of professional tennis, says he understands his tennis more than ever.

“I haven't changed anything in my game really. It's just that now I understand the game a little bit better. Mentally, I'm a little bit more into it. I feel like at least I'm fighting on every point,” Mannarino said.

“When I'm losing a match I'm not losing a match because I'm getting pissed on court and going stupidly out of the match. I'm just trying my best on every point, and I've become definitely more of a consistent player, and finally it's working out.”

His transformation began about a year ago when Mannarino started working with countryman and former competitor Jean-Christophe Faurel, who reached No. 140 in the ATP Rankings during his career.

They've focused on Mannarino's temperament every day, in practice but especially before matches. Faurel walks Mannarino through a hypothetical situation. For example, he tells his player, it's 4-1 but your opponent has come back and made it 4-4. How are you going to react? 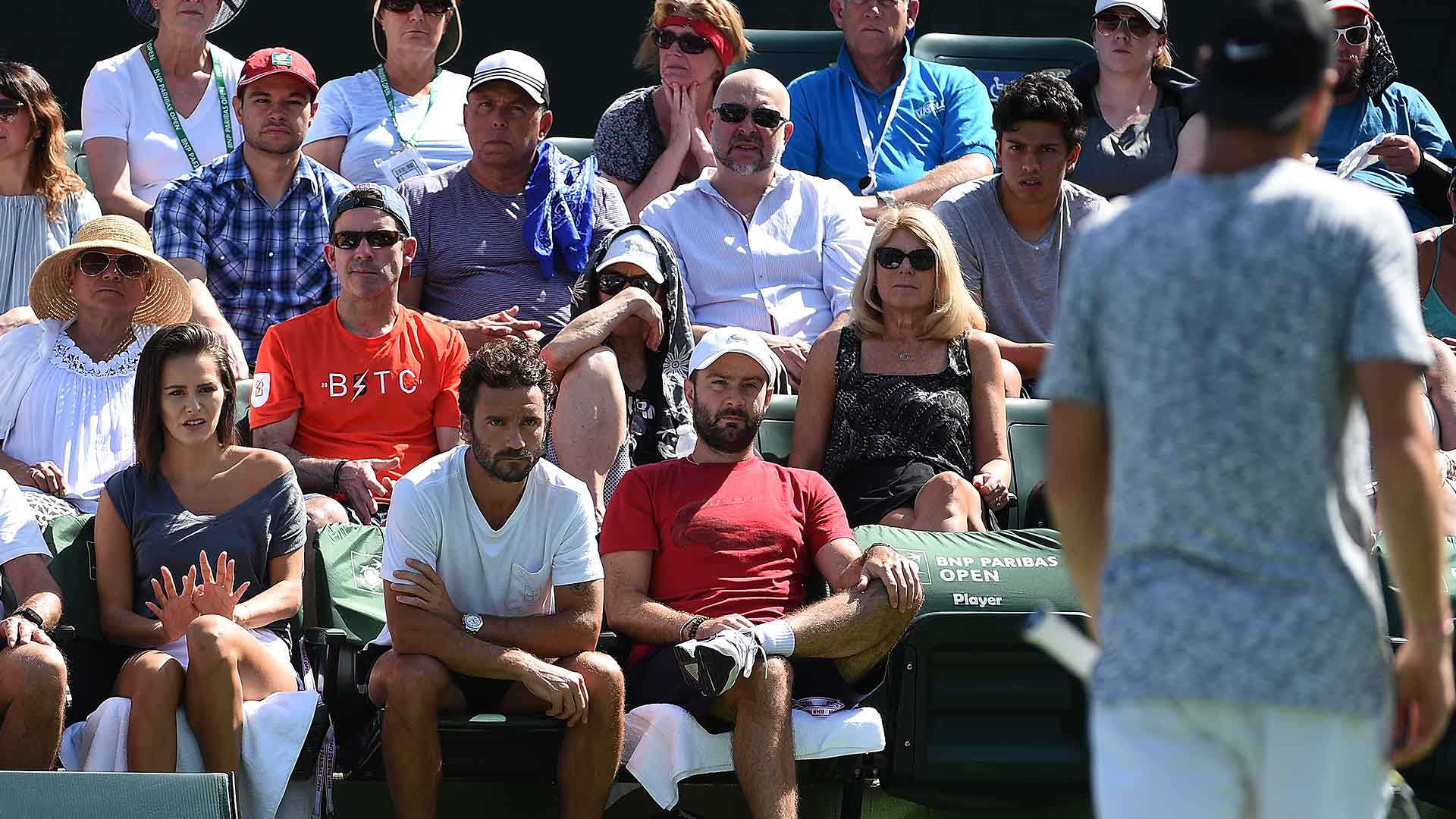 Faurel, in the white T-shirt, has been instrumental in helping Mannarino stay calm on court. (Photo: Kevork Djansezian/Getty Images)

“You have two options: To be frustrated and say, 'Yeah, forget it. I should have finished this set two games ago,' or stay focused. It's 4-all. You have to win two games, and so if there is a moment where you have to be strong in your head, it's now,” Faurel told ATPWorldTour.com.

He knew Mannarino's game well before they began working together after the 2017 Miami Open presented by Itau. The two had played twice on the Futures level in 2008, both three-set wins by Mannarino, and they played at the same club in Paris.

“It was his biggest problem to solve with himself, to manage his frustrations,” Faurel said.

It wasn't as if Mannarino was ignoring his weakness. He had talked with mental coaches in the past, but had never as much success as he's had with Faurel.

“It's a really personal thing so you have to feel confident and comfortable with the person,” Mannarino said.

With Faurel, Mannarino has found his confidant.

“I feel like I'm able to talk about anything with him. Sometimes it's just going into a deep discussion, it's maybe sometimes working better than practising on court. He understands me pretty well, and we understand each other so it's easier to work together,” Mannarino said.

The mental clarity has spread to his on-court tactics. Mannarino, with his unorthodox short backswings on both sides, knows what he wants to do once he steps on the court.

“My game is to be consistent as I can. Running well. Making the opponent have a hard time on court, making him work a lot,” Mannarino said. “I know that I can run for a long, long time... I am just trying to get into a real fight.”

Read More: Shapovalov Made To Work In Miami Debut

Eventually, Mannarino said, he wants his opponents to think of his game style like they think of David Ferrer's – that every match against him will be a contest of attrition.

“Every time you play against David you know it's not going to be easy, because he's going to be on every ball,” Mannarino said. “I'm not doing as good as he's doing, but I'm just trying to do the same things, and it's paid off lately.”

If Sam Querrey's comments last month are any indication, though, Mannarino is on his way to a Ferrer-like reputation. Querrey, No. 14 in the ATP Rankings, had lost to Mannarino the first three times they had played in their FedEx ATP Head2Head series, before beating him at the New York Open.

“It feels like I beat Rafa out there. That guy’s always been so tricky,” Querrey said.

Mannarino knows he's still a work in progress, on the court and mentally. But he's not expecting perfection. Instead, he'll take what's happened during the past 12 months – tiny bits of improvement followed by more bits of improvement.

“I'm just trying to stay focused as much as I can and not to get distracted by anything out of the game... It's not something you can change, like this,” he said, snapping his fingers.

“But I'm just trying day after day to become a more patient person and hopefully it's going to get better day after day. I don't know. It's a long process as well. But still maybe sometime [this] year, I'm going to finally be a mature guy. I'm not going to be a kid anymore. Well, we'll see.”