Manuel Santana, one of Spain’s greatest sporting heroes, passed away aged 83 on Saturday in Marbella. The four-time major singles champion had been Tournament Director of the Mutua Madrid Open until 2019, when he became the ATP Masters 1000 tournament’s Honorary President.

Upon hearing the news, Felipe VI, the King of Spain, posted on Twitter, “There are people who become legends and make a country great. Manolo Santana was and will always be one of them.”

Spanish Prime Minister Pedro Sanchez said, “He won Roland Garros, the US Open and Wimbledon, a total of 72 tournaments and an Olympic gold to make him a tennis legend and one of the best athletes our country has seen.”

Rafael Nadal, a 20-time major champion and five-time winner of the Mutua Madrid Open, paid tribute on Twitter, writing, “You will always be one of a kind and special. As I have said many times in the past: a thousand thanks for what you did for our country and for opening the way for others. You were always my role model, a friend and someone who was close to all of us.”

At the height of his fame, when Santana could barely leave his house, he took Spain to the World Group final in the 1965 and 1967 Davis Cup campaigns (l. to Australia both times). He was able to mix in the elite of Spanish society and government. 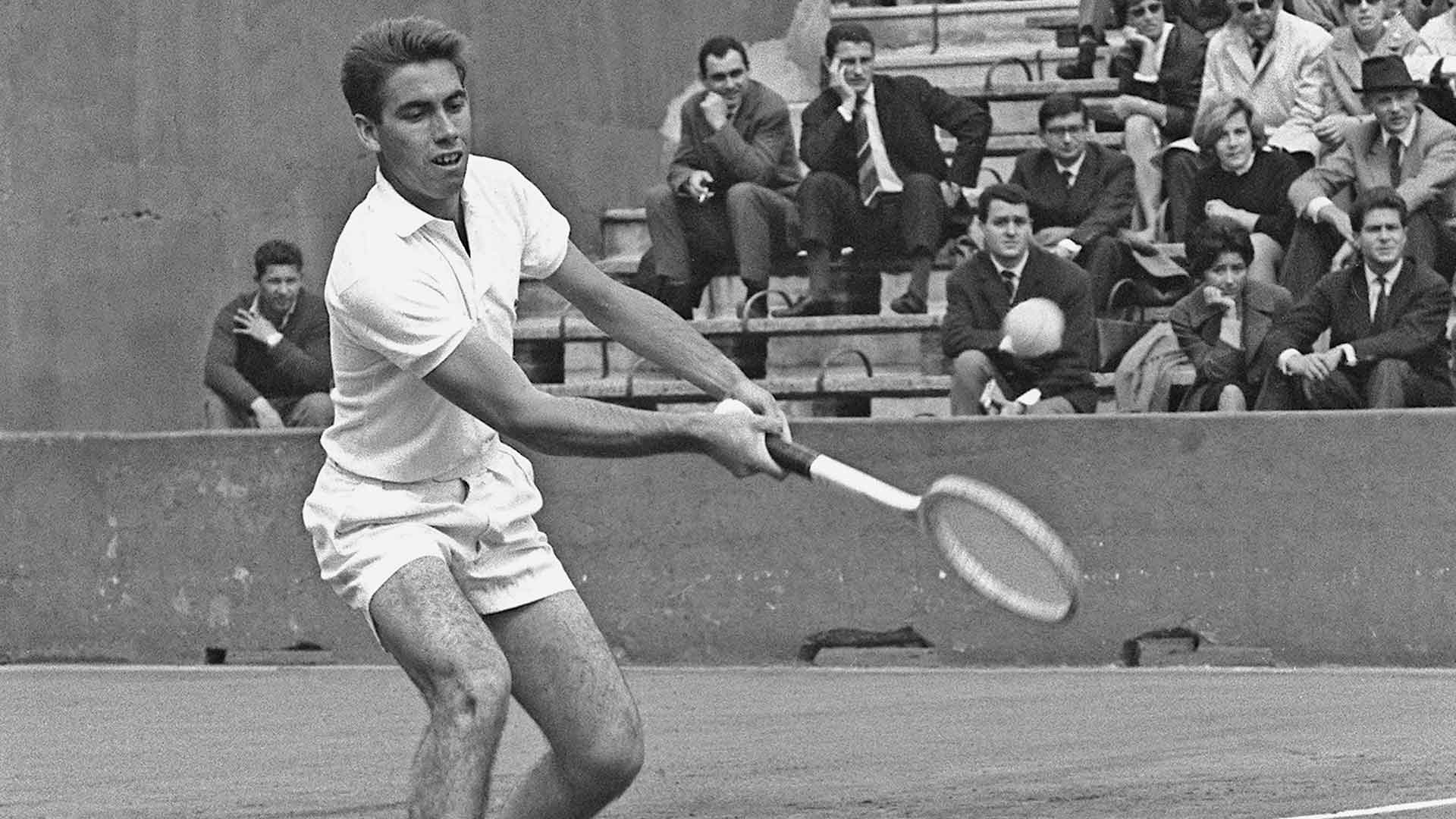 Santana’s father, Braulio, an electrician, moved from Valladolid in northwest Spain, to Chamatin, on the outskirts of Madrid, but died when his son was 16. ‘Manolo’, as he was known throughout the tennis world, was born in the middle of the civil war and was one of four sons. The family shared a single bathroom with an entire building.

He quietly abandoned his local school aged 10, when he realised that he could pick up tips as a ball boy at Club Tenis de Velasquez, bringing in welcome money for his mother, Mercedes, and two years later he carved his first tennis racquet out of wood. Santana, who travelled into the city centre by street car, won the club’s ball boys’ tournament aged 13 and became a club member.

Shortly after his father’s passing in 1954, Santana came under the guidance of the Romero Giron family, who changed the outlook of his life. Giron’s widow, Gloria, and two of her children, Alvaro and Aurora, provided the young Santana with a structured daily routine. There was weightlifting at the gym before breakfast with the Giron family, followed by tennis lessons, a daily trip for lunch with his mother and siblings, then back for afternoon study with a tutor. It was hard, having missed school for almost five years, but Santana eventually earned a high school diploma in the United States.

Santana, who won the Spanish junior championships in 1955 and 1956, was not permitted to travel alone internationally until 1959, when the Giron family felt he was both mature and socially adept. He completed his military service in 1960 and, the following year, with improved English, he beat two-time champion Nicola Pietrangeli, who’d later become Santana’s great friend, 4-6, 6-1, 3-6, 6-0, 6-2 in the 1961 Roland Garros final. Santana, who extended rallies to make Pietrangeli fight for every point, wept for one hour afterwards.

Santana, who enjoyed his early success on clay, possessed terrific hand-eye coordination, a potent forehand and could disguise his drop shot. He reclaimed the Roland Garros crown in 1964, when he beat Pietrangeli again, 6-3, 6-1, 4-6, 7-5, in the final.

Having once said that “Grass is for cows”, a statement echoed by dozens of players in the future, Santana’s confidence and game matured on the surface, centred largely on his speed, anticipation and willingness to switch-up his style. He played at the US Nationals [now named US Open] on seven occasions, losing twice in the 1960 and 1964 first round, but Santana became the first European to lift the trophy since Fred Perry in 1936. He beat Cliff Drysdale, who would go onto become the first ATP President, 6-2, 7-9, 7-5, 6-1 in the 1965 final.

Santana’s greatest singles triumph came on 1 July 1966, when he captured the Wimbledon trophy over Dennis Ralston 6-4, 11-9, 6-4 and kissed the hand of Princes Marina of Kent upon receiving the famous trophy, which went against royal protocol. He was the first European to win the Wimbledon title since France’s Yvon Petra in 1946. Later in 1966, Santana, adjudged to be the amateur World No. 1, underwent a right ankle operation, which left him tentative in his movement.

Santana played doubles sparingly, but won the 1963 Roland Garros doubles title with Roy Emerson. At the 1968 Olympic Games in Mexico City, Santana won a singles gold medal and a silver medal in doubles (with Juan Gisbert), where tennis was a demonstration/exhibition sport.

In playing retirement, Santana was captain of Spain’s Davis Cup team between 1980 and 1985, then again from 1995 to 1999. Inducted into the International Tennis Hall of Fame in 1984, he managed the Manolo Santana Racquets Club in Marbella and also the Sport Center Manolo Santana in Madrid. The main court at the Caja Magica, venue of the Mutua Madrid Open, is named in his honour.

My thoughts are with good friend Manolo Santana, who has passed away. A clay court maestro, Manolo famously said grass was for cows, but still managed to win Wimbledon in 1966, and inspired generations of Spanish players with his renowned heavy topspin and fighting spirit. pic.twitter.com/6GzSbzDcPT

The great Manolo Santana has passed away.

He & I won our 1st #Wimbledon singles titles in 1966 (he was the first Spanish man to win the title). We danced the 1st dance at the Ball.

He loved the sport, & we shared many conversations over the years.

Condolences to his family. pic.twitter.com/spGkz300m1

Heartbreaking to just get the news about Manolo Santana. Sending my deepest condolences and prayers to his family and all who loved him, which is so many. Thank you dear Manolo for paving the way, you will be missed and celebrated always! Rest In Peace legend! #manolosantana pic.twitter.com/yD9133duQj

Gutted to hear of the passing of one of the all-time nice humans who also played our beautiful sport of tennis so beautifully. A master and a gentleman on and off the court- RIP my friend, Señor Manolo Santana…#TennisHallOfFame

A sad day - a great player - a better person , always a smile and an optimistic word for whomever he was speaking with - RIP https://t.co/AyxZtB9kPt

What a stylish player, and gentleman Manolo Santana was… the first Spaniard to climb the mountain at Wimbledon…in many ways the father figure of Spanish tennis . Passing away yesterday after 83 good years, we remember your beaming smile, & your company with much fondness Manolo

We’re sad to learn of the death of 1965 US Open champion Manolo Santana.

Our thoughts go out to his family and friends. pic.twitter.com/7dS1svROyM

🙏 Our thoughts are with the family and friends of Manolo Santana, who has passed away today at the age of 83 🖤 pic.twitter.com/qvWgt5XZYh