Manuel Santana pictured with former World No. 3 David Ferrer in Madrid in 2019.

Manolo Santana, a pioneer in tennis and great inspiration for Spanish sport as a whole, passed away on Saturday aged 83. The news came in an announcement from the Mutua Madrid Open, the tournament where he was Honorary President and which he directed from 2002 to 2018, turning the Spanish capital into a key stop on the ATP Tour.

Known as one of the great pioneers of tennis in Spain, Santana made his name by paving the way for other Spanish greats to follow in his footsteps. The Madrid native reached No. 1 in the world in 1965 and won four Grand Slam singles titles: Roland Garros (1961, 1964), US Open (1965) and Wimbledon (1966). These were unforgettable feats for a country with few notable achievements on Tour.

Having grown up in a working-class family, the son of Braulio, an electrician, and Mercedes, housewife, Manolo managed to use his passion for the sport to forge a path towards the elite of tennis. His perseverance enabled him to overcome hurdles that previously seemed insurmountable for Spaniards, growing the popularity of tennis before the professional era.

He holds a place among the greatest icons of Spanish sport and his social presence remained intact into modern times, as evidenced by the Manolo Santana Stadium, the Mutua Madrid Open's centre court. The clay-court ATP Masters 1000, the biggest of all the tournaments held in Spain, is keeping the Madrid native's legacy alive.

The outpouring of affection on social media was immediate. Countless players from the circuit have paid their tributes to the legend, whose spontaneity, warmth and contagious joy made him one of the best-loved figures in the game.

"I've just received the terrible news that our great Manolo Santana has passed away," wrote Rafael Nadal. "As I have said many times in the past: thank you so much for what you did for our country and for paving the way for so many. You were also a role model, a friend and someone who was close to everyone. We will miss you, Manolo. You will always be unique and special. Thoughts and strength to your family at this time. We will never forget you!"

"Rest in peace, Manolo. You were always the best," added an emotional David Ferrer, whom Manolo was with in Madrid when he retired from the professional game in 2019. "Thank you for showing us how to achieve our dreams and above all for being such a special person."

Alex Corretja sent an affectionate message, highlighting Santana's greatest virtues. "Manolo, your personality, your sense of humour, your proximity, your affection and, above all, your friendship, is something I will never forget. Thank you for all your advice and for showing me a unique vision of life. I will miss you so much, my friend."

"Today we said goodbye to Manolo. A great tennis player and friend. Spanish tennis owes him so much," offered Juan Carlos Ferrero. "Thanks to him, it became popular in Spain. He has supported all tennis players and tennis lovers since his beginnings. Without him, I would certainly not have started out in this sport. You're great and unforgettable. Rest in peace! We will try to follow the path you laid for us."

"Rest in peace, Manolo. Thank you for being such a magnificent person," wrote Alejandro Davidovich Fokina. "I will always be grateful to you for your advice when I was little. Thank you for what you did for Spanish tennis and for showing the young players the way. We have lost a legend. We will miss you so much." 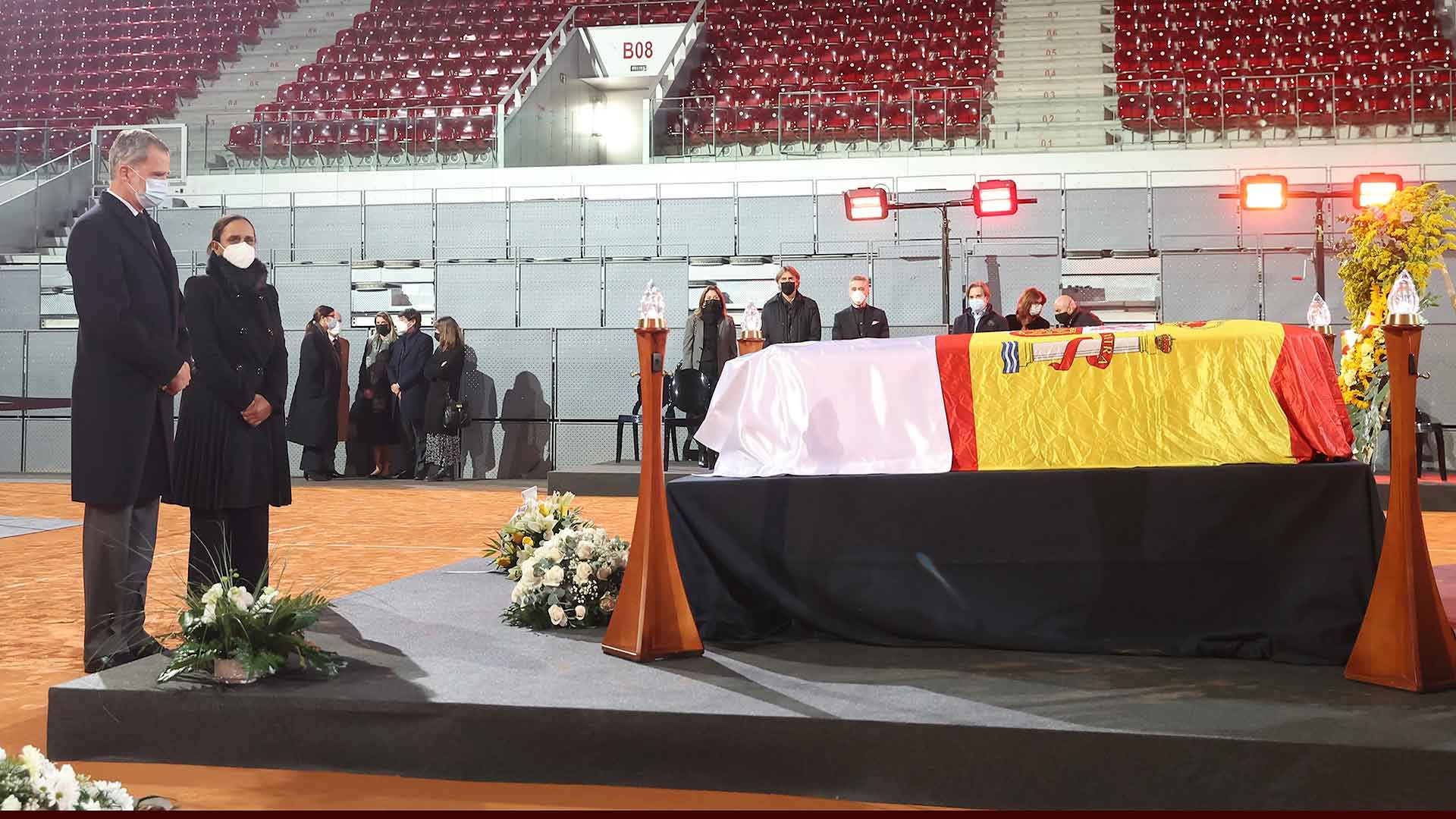 King Felipe of Spain is accompanied by Claudia Rodriguez, spouse of Manolo Santana, as he visits Santana's funeral chapel at Caja Magica on in Madrid, Spain.

"Today, tennis and sport are in mourning for the loss of Manolo Santana," lamented Fernando Verdasco. "My great friend, it is so sad to hear this terrible news. You were always there in the good times, but even more so in the bad ones. You were one of the few people who wrote to me when I lost an important match. I'm going to miss you a lot, but you will always be in mine and everyone's hearts. You have left a unique and unmatchable legacy."

Spanish players from the WTA Tour also extolled Santana, who was a key figure in making the Mutua Madrid Open a mixed tournament in 2009.

"I was so sad today to receive the news of his passing," said Garbine Muguruza. "All of us have always had a very close relationship with him, because that's how he was, warm, friendly, always prepared to share his experiences. He always looked out for me, he was one of those people that sent messages of encouragement at good times and bad. He was a role model to all of us, a pioneer in Spanish tennis," wrote the current World No. 3. "We will miss him so much, especially at the Grand Slams, where he would always come and see me, with his eternal optimism. All of my love and my sincerest condolences to his family and friends."

"Manolo gave this sport so much. He was greatly appreciated and people had so much affection for him. He was someone that was always ready to offer his friendship," remembered Carla Suarez Navarro . "I was lucky to meet him many times, above all at the tournament in Madrid. I would like to send my support to his family and loved ones. People should know that he will be remembered with great affection."

Players from every generation have memories of him. Even the 24-year-old Paula Badosa. "It's a very sad day for tennis, especially for Spanish tennis," she said. "To lose a legend like Manolo, who has always been there for all of us and has done so much for tennis, is so sad. He will be greatly missed."

"A very sad day. We have lost Manolo, a pioneer and legend of our sport," noted Anabel Medina. "I will always remember his mischievousness, affection and warmth. His anecdotes will always stay with me. My sincerest condolences to his family and friends."

Conchita Martinez, the first Spanish player to follow in Manolo's footsteps by winning on the grass of Wimbledon, also wanted to share some words of affection, writing: "It's a very sad day for Spanish sport. We have lost a great friend, a legend and a pioneer in our sport. Manolo, we will miss you so much.

"It has always been a pleasure to share moments with you at the great tournaments such as Wimbledon, Roland Garros, Rome and, of course, Madrid, which you were linked to until your final days. It was amazing to connect with you. You were passionate about our sport, you forged the way for all of us that came after you. We will be eternally grateful to you."

"It is very sad news for our tennis," Lara Arruabarrena said. "He was a legend and he paved the way for so many. Whenever I saw him in Madrid, he was great and always full of encouragement."

Santana's legacy is replete with huge admiration on the court and unanimous affection away from it. May he rest in peace.