Daniil Medvedev has consistently returned serve from far behind the baseline.

Medvedev’s Returning Is Literally Off The Charts!

Daniil Medvedev is off the charts completing the 2020 season, both figuratively and literally.

First, the figurative. He finished the season on a 10-match win streak in winning the Rolex Paris Masters and the Nitto ATP Finals. Seven of the 10 victories were against Top 10 opponents, including defeating the World’s No.1, No. 2 and No. 3 players to win in London.

Now for the literal part.

Medvedev’s first-serve return contact point at the 2020 Nitto ATP Finals against Alexander Zverev averaged a staggering 5.51 metres behind the baseline. Hawk-Eye court position graphics only extend back to a five-metre mark, resulting in several of Medvedev’s hit points being recorded literally in a blank space… off the chart.

The picture below highlights Medvedev’s extreme return position against Zverev from their round-robin match last month in London. 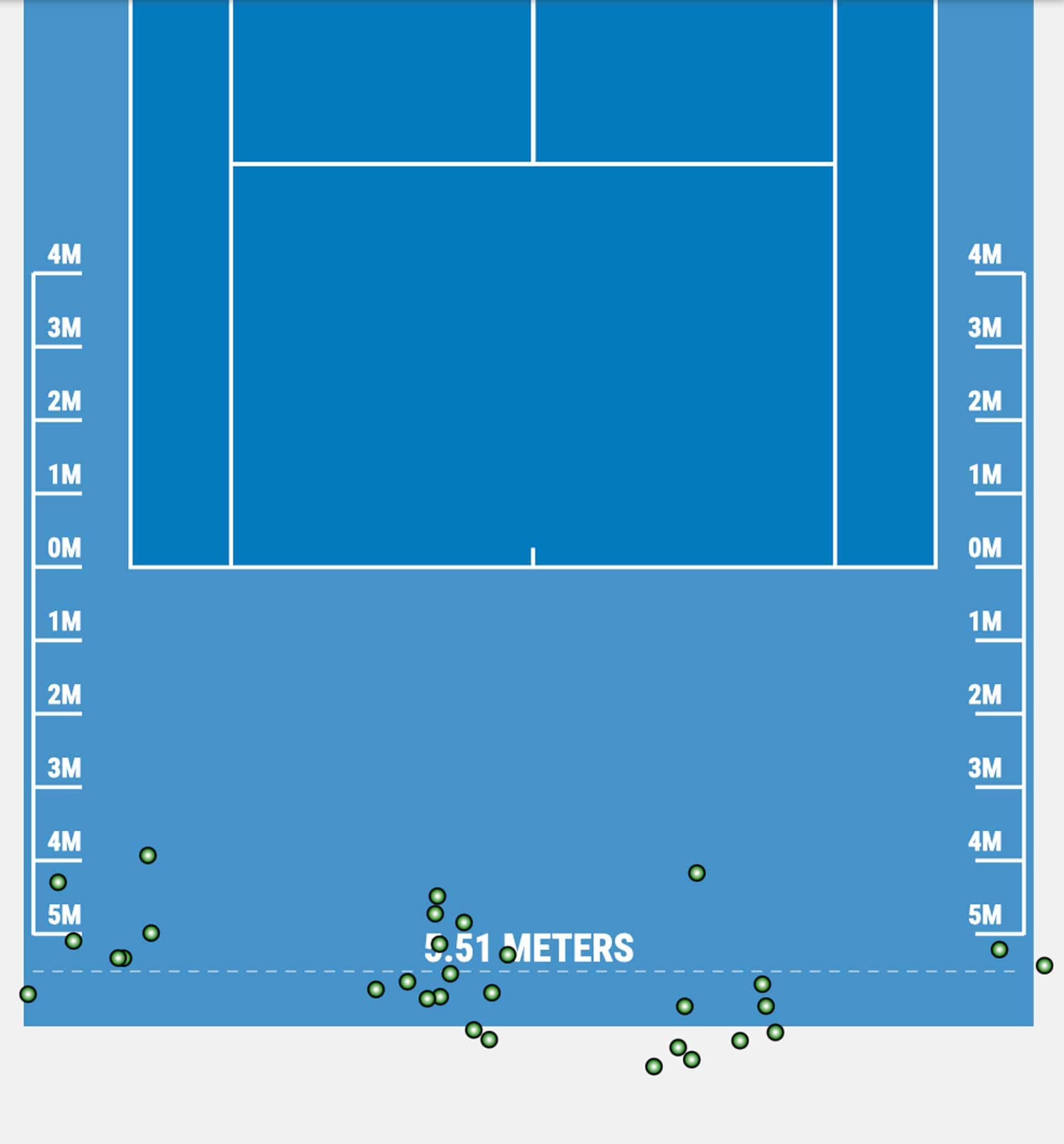 This was the deepest a player has stood to return first serves in the past three years at the Nitto ATP Finals. Of the 44 Hawk-Eye recorded matches, which yields first-serve return position 88 times, Medvedev owns the five deepest locations, averaging between 4.51 metres and 5.51 metres behind the baseline. 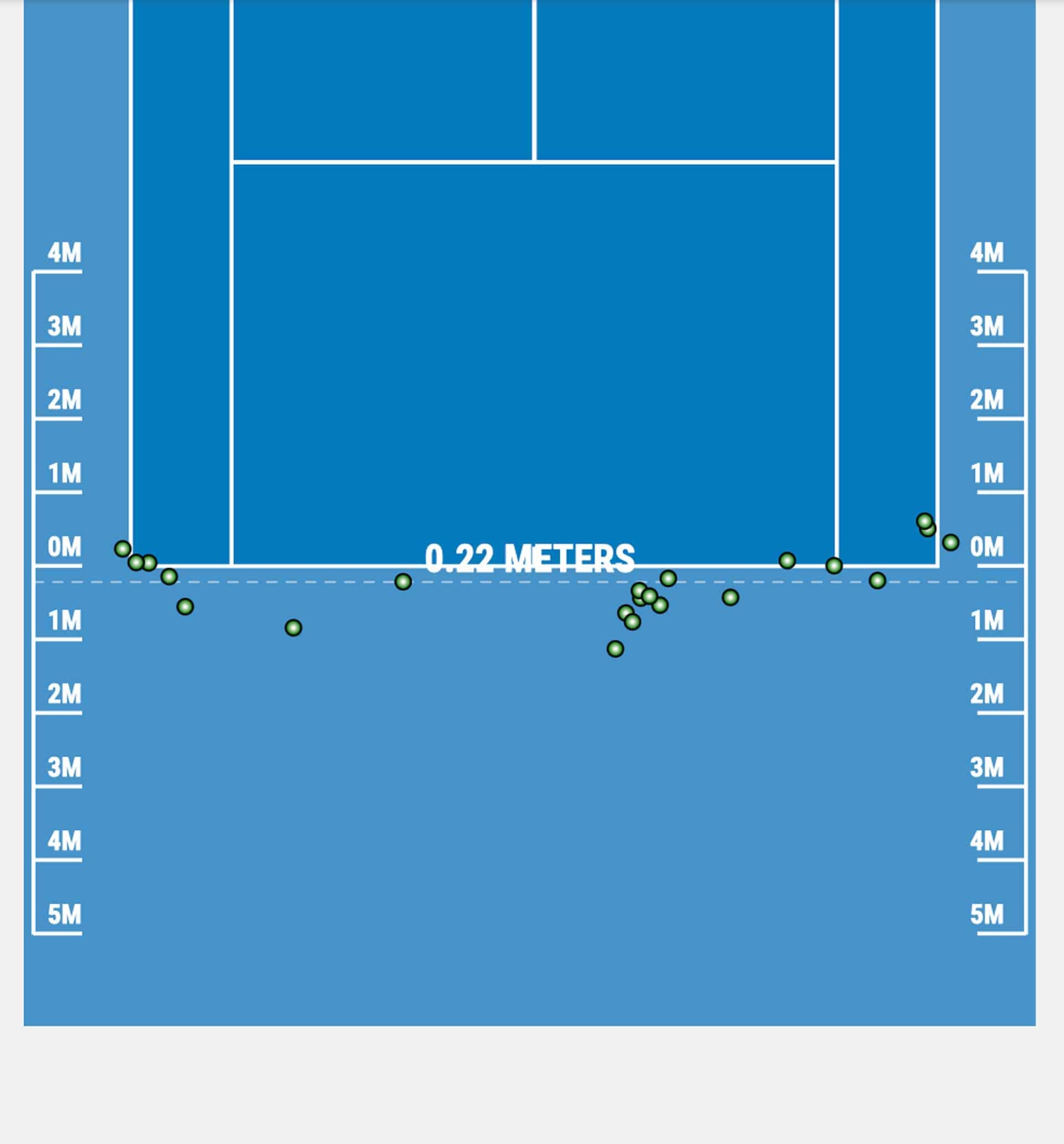 The average contact point against both first serves and second serves has been drifting further back in London over the past three years.

Tennis’ traditional mantra has always focussed on standing further back behind the baseline to return first serves and stepping up inside the baseline to attack slower second serves. That line of thinking is getting thrown out the window at The O2.

In 2018, exactly half of the time (15/30) a player averaged making contact with his second-serve return inside the baseline. The 2018 total of 15 dropped to only eight in 2019 and dropped even further to six this year.

What’s stunning is that players are now employing a strategy that is completely the opposite, which is to move back, not forward, to return the second serve. For example, when Medvedev played Nadal in the semi-finals of the 2020 event, both players averaged making contact with their second-serve return deeper compared to their first-serve return.

Medvedev’s preference for standing way back against first serves also washes over to second serves, where his name sits beside four of the deepest seven second-serve return positions. What’s fascinating is that Dominic Thiem owns both ends of the second-serve return spectrum, averaging returning from 1.19 metres inside the baseline in 2018 against Federer and 5.33 metres behind the baseline in 2019 against Zverev.

Moving up to return serve is all about blocking and quickly rebounding to rush the Serve +1 groundstroke. Standing way back is all about hitting an atypical return. When standing deep in the court to return, Medvedev can take full-blooded cuts at the ball as it significantly slows down and drops into his hitting zone. It’s essentially just another groundstroke.

We may have to start redrawing our graphics as Medvedev continues to write his own history.