Kyrgios Takes Out Medvedev In Montreal

Nick Kyrgios claimed the biggest scalp of his red-hot winning streak Wednesday when he upset World No. 1 Daniil Medvedev 6-7(2), 6-4, 6-2 in a heavyweight National Bank Open Presented by Rogers second-round clash in Montreal.

Kyrgios frequently deployed serve-and-volley tactics to exploit the defending champion’s deep positioning on return. He also staved off the two break points he faced during the two-hour encounter at the ATP Masters 1000 event.

“This is the fourth meeting we’ve had and I’ve had some success against him in the past,” said Kyrgios, who improved his ATP Head2Head series record against Medvedev to 3-1 with the win. “But he’s beaten me before [as well]. I feel like we know each other’s games well. I’m not the type of player that goes into this match looking at rankings or anything like that, it’s just who I’m playing and what kind of ball they’re giving me."

Kyrgios Versus The Big Guns

After backing up his run to his maiden Grand Slam final at Wimbledon in June with his seventh ATP Tour title in Washington last week, Kyrgios has now won 14 of his past 15 matches. The win against Medvedev lifts the Australian to No. 31 in the Pepperstone ATP Live Rankings.

Kyrgios had shown resilience to rally after the disappointment of losing the opening set in Montreal, during which he had two set points on the Medvedev serve at 5-4, but could not convert. An early break of the top seed's serve in the second set proved key as the Australian continued to dominate behind his delivery and level the match.

“Today I had a very clean objective of how I was going to play, a lot of serve-and-volley, a lot of aggressive play from the back," said Kyrgios. "I executed better than he did, that’s all it comes down to. He won the first set and I feel like I had opportunities there as well, so hopefully I can just keep this rolling.”

Although he struggled to find his top level, Medvedev did carve out his first two break point opportunities of the match in the second game of the decider. Yet Kyrgios’ purposeful moves forward kept the World No. 1 at bay, and some trademark clean hitting earned the Australian four games in a row from 2-2 as he charged to victory having won 67 per cent (32/48) of points at the net.

"For me, today the biggest difference was that I missed in some important moments some shots," Medvedev said in his post-match presser. "I didn't miss much, but missed just a few where I think it could be different maybe in the later stage of a tournament. That's a pity. At the same time, well, it's like this."

The top seed later added: "He was great. He was playing good. He beat me fairly, if we can say [it] like this."

The way in which Kyrgios took charge in the final set is reflected by INSIGHTS Conversion, which show that the Australian won 83 per cent of points when attacking. 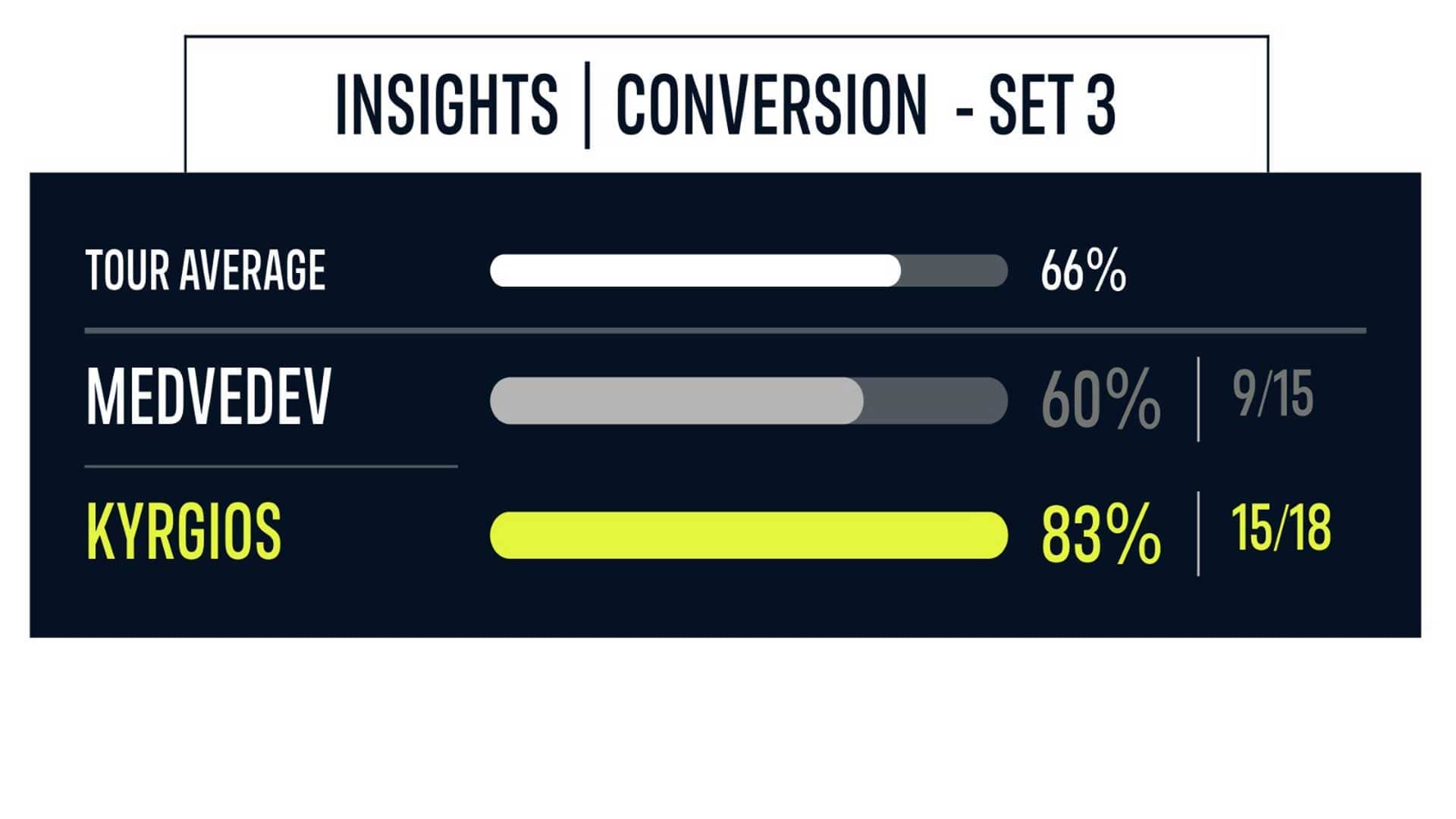 You May Also Like: Fresh Data INSIGHTS Provide Fans With Stronger Understanding & Narratives

The win is Kyrgios’ second over a reigning World No. 1, after he defeated Rafael Nadal at Wimbledon in 2014. He will face countryman Alex de Minaur in the third round in Quebec, a stage that Kyrgios has never progressed past at the Canadian Masters 1000 event.