Daniil Medvedev will try to win his first individual title of the season on Sunday in Marseille against Pierre-Hugues Herbert.

ATP Staff
This article contains:
The Russian reflects on his unorthodox strokes

If there’s one word that does not describe Daniil Medvedev’s game, it’s “orthodox”. The Russian star made light of that on social media Saturday after advancing to the Open 13 Provence final.

Medvedev posted a picture of his legs twisted up with his back bent over as he hit a backhand. The top seed captioned his tweet: “People call me an elegant player. #yogafail”

“Definitely when I play on the court, I don’t think [of] how I’m going to put my legs just before the shot, I just try to put [the ball] in,” Medvedev said. “When I saw this picture, it was quite funny because many people can break their legs trying to do this at home. There should be a disclaimer: ‘Don’t try this at home.’ I thought it was funny to post about it.”

Whether his strokes look typical or not, Medvedev has had plenty of success with his game. On Monday, he will climb to a career-high World No. 2, becoming the first player outside the Big Four of Roger Federer, Rafael Nadal, Novak Djokovic and Andy Murray to hold a top two spot since Lleyton Hewitt in July 2005.

“I’m definitely first of all happy about it. It’s a really cool achievement,” Medvedev said. “This moment is going to be [me climbing to] No. 2, which is really cool, especially knowing that other than the Big Four there were not so many people in the past years [there]. [That] makes me happy about this achievement, but of course as soon as you touch something new you want to go higher and higher.” 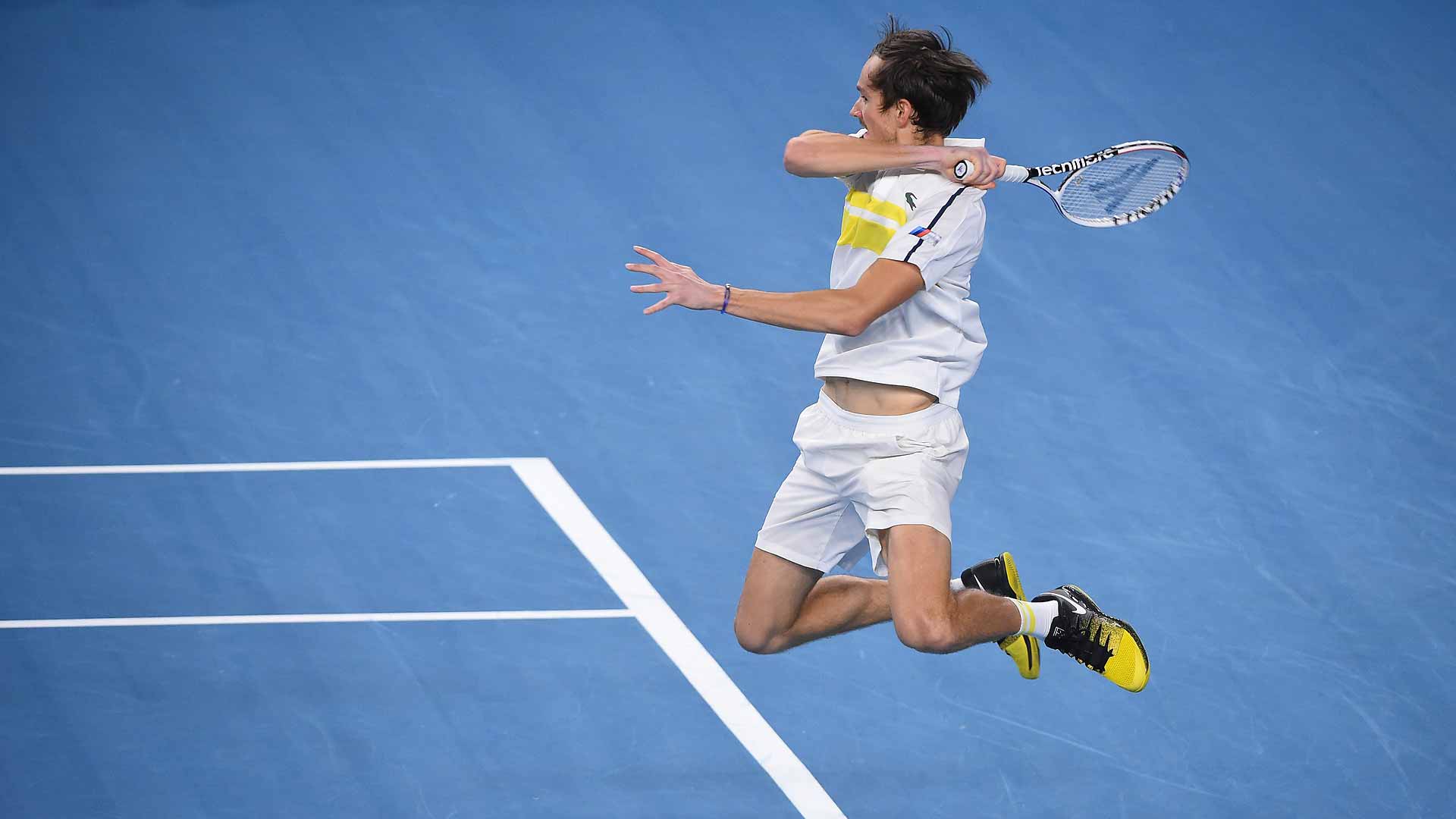 Photo Credit: Corinne Dubreuil/Open 13 Provence
Medvedev will try to win his first individual title of the season on Sunday when he takes on Pierre-Hugues Herbert for the Marseille trophy. Although the top seed is Russian, he is plenty comfortable in France.

On Saturday, Medvedev conducted his on-court interview in French. As a teen, he moved to France to train, and his longtime coach is Frenchman Gilles Cervara.

“I learned just a little bit [of French] before coming to France, so I didn’t know a lot of words and I couldn’t talk at all,” Medvedev said. “I knew just the basics to actually understand some things because if you come from zero and you just listen to people talk, I don’t think it’s the same when you know a little bit about the language and then you listen to people talking.”

Medvedev quickly picked up the language because of all the Frenchmen around him. Today he communicates in French with Cervara, French players, Belgian David Goffin and Swiss Stan Wawrinka.

“Just step by step [I’m] improving the language and I don’t think I am very easy with the languages, but I definitely have a small talent,” Medvedev said. “Since I speak already three languages and I feel like my English and French are not bad.”