Learn how Daniil Medvedev reached his first Nitto ATP Finals, to be held 10-17 November at The O2 in London.

Medvedev's Secret Is Out: He's Ready To Challenge The Big Three

Mike Dickson
This article contains:
Medvedev is the first Russian to qualify for the Nitto ATP Finals since Davydenko won this title 10 years ago

As recently as January, Daniil Medvedev was the best-kept secret in tennis. Little fuss was made when he reached the final in Brisbane in the opening week of the season, taking out Andy Murray along the way. And not too many people took notice when, two weeks later on a balmy night in Melbourne, the Russian pushed Novak Djokovic to four hard sets in the fourth round of the Australian Open.

With Medvedev now a debutant at next week’s Nitto ATP Finals, perhaps we all should have been more alert to his talents at the start of the season. And noted just how much work Djokovic, a supreme baseliner, was having to do to beat his young challenger. Medvedev came close to matching Djokovic’s machine-like qualities.

Back in January, Medvedev seemed like just another promising member of the chasing pack. Stefanos Tsitsipas, with his victory over Roger Federer at the Australian Open, appeared to be the most significant name to watch from the next generation. For years, the big question in men’s tennis has been: who is going to emerge to get in among the Big Three of Federer, Rafael Nadal and Djokovic? By the end of the US Open in early September, it looked like we had our answer: the 6’6” Muscovite with outstanding movement who is a nightmare to put away.

Even before Medvedev played his first match of the US Open, he was no longer the secret he had been in January. On a roll in the weeks after Wimbledon, he reached three consecutive finals in Washington, D.C., Montreal and Cincinnati, winning the last of those for his first ATP Masters 1000 title. By reaching his first Grand Slam final at the US Open, he became only the third man in the Open Era, after Ivan Lendl and Andre Agassi, to feature in the final of those four tournaments in the same season.

Medvedev gave Nadal an almighty fright in New York, coming from two sets down to take the match to a fifth set. He backed that up by winning the St. Petersburg title in late September, in what was his fifth final from five tournaments. Then, in Shanghai in October, Medvedev extended that run to six finals in six consecutive tournaments, and won his second ATP Masters 1000 title.

The evidence was mounting up that, after playing a very heavy schedule, this was the player coming through from the peloton to take on the leaders. “It’s amazing,” Medvedev said of becoming the first man after the Big Three to qualify for the Nitto ATP Finals. “That shows what a great year I’m having, that the work I’ve been doing is paying off. But I don’t want to stop.”

On his run to the US Open final, Medvedev established himself as something of a character. First, he goaded the crowds in the early rounds by thanking them for booing him, saying it gave him extra energy. Flushing Meadows can be a difficult audience to please, but there was a remarkably swift transformation before the fortnight was out. By then, New York had taken to him. Medvedev employed his dry Russian humour, combined with some admirable humility, to win the crowds over.

When a montage of Nadal’s 19 Grand Slam triumphs was played on the big screen after the final, Medvedev could not help wondering what would have happened if he had pulled off an amazing comeback victory. “When I was looking on the screen and they were showing No. 1, No. 2… No. 19, I was like, ‘if I would win, what would they show?’” he said before a suitably charmed Arthur Ashe Stadium. 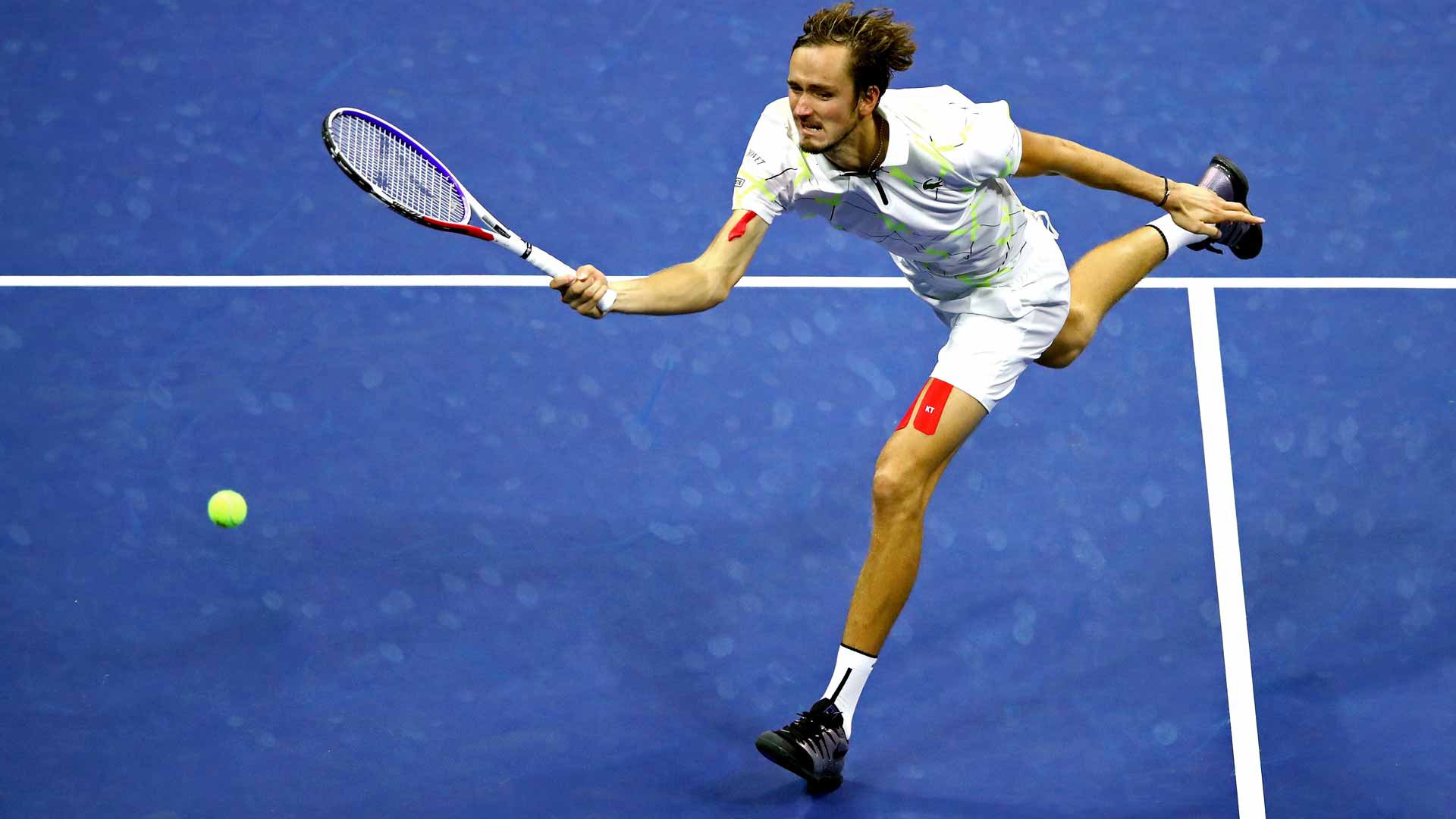 During the US Open, Medvedev looked back at his journey towards the top. “I will not say that I’m a kind person or a good person. I can only say I’m a really calm person in life. I actually have no idea why the demons go out when I play tennis. Especially when I was a junior, I had a lot of problems with my attitude. I was not getting defaulted, but to have a game penalty was easy,” he said.

“I was working hard because every time I do something wrong on the court, I’m sitting with myself thinking: ‘I’m not like this in normal life. Why does it happen? I don’t want it to happen like this.’ I want to be a better person than I was a few days [at the US Open]. To be honest, my wife helps me a lot. I was sitting after these matches and I was like: ‘I don’t want to lose these matches because I get crazy or because I lose some concentration because of the fans’.”

It is not that Medvedev lacks brains. An avid reader and chess player, he attended an academic school specialising in maths and physics before concentrating on becoming a tennis player. The fondness for working things out comes through in his tennis, as he showed against Nadal. He looks like a natural problem solver on court, with a willingness to change his game if the situation demands it.

Underpinning Medvedev’s results are some very modern attributes. He moves exceptionally well for a tall man and his wingspan allows him to chase down balls and deliver his hard, flat groundstrokes with relentless accuracy.

In fact, Medvedev had thought it was only a matter of time before he broke through. “Before [this year’s US Open] my best Slam result was the fourth round. I felt like it’s just so tough to win a five-set match. I knew I was going the right way, I just had to fight for every set, for every point,” he said. “I think it’s just experience because I lost two really tough five-setters [this year] – at Roland Garros, leading two sets to love, having a break in the fifth, and at Wimbledon, with a break in the fifth. I lost them, but it’s a great experience to know how to not let this happen again.”

Next week at the Nitto ATP Finals, Medvedev has the opportunity to win his biggest title yet. But it should be remembered that getting to the top is one thing and staying there is another – the phenomenal success of Nadal, Djokovic and Federer has made it look way easier than it is in reality. Medvedev’s task now is to show that he has the application to take the extra steps and to win when the pressure is at its greatest. The signs are that he is becoming better equipped to do so.