Daniil Medvedev, who was No. 61 in the ATP Rankings one year ago, is into the Top 10 for the first time.

Behind A Renewed Mindset, Medvedev Cracks The Top 10

ATP Staff
This article contains:
Russian reflects on his journey to the elite group

One year ago, Daniil Medvedev was the No. 61 player in the ATP Rankings, six months on from lifting his first ATP Tour trophy in Sydney and eight months on from competing in the inaugural Next Gen ATP Finals in Milan.

Ever since, the Russian has been on a tear. And on Monday, the 23-year-old took the next step in his journey by breaking into the Top 10 for the first time, reaching a career-high No. 10.

“I am very proud to reach this step in my career. Some years ago I changed my life and really dedicated myself to this sport and the results have shown this,” Medvedev said. “This is hopefully the first step of many more goals. I am looking forward to the second half of the season.”

It has been an incredible 52 weeks for Medvedev, who has quickly become a consistent threat on every surface, capable of competing against the best players in the world. The 6’6” right-hander has won 56 matches over the past year, good for fourth-best on the ATP Tour.

Just 18 months ago, Medvedev earned his maiden tour-level crown in Sydney. Little did he know at the time that between then and now he would lift three additional trophies, including one at the ATP 500 tournament in Tokyo last October. Three of his four titles have come in the past 11 months.

“Growing up, I never thought I'd be a professional player in the Top 100. I went about it step-by-step, I never made any one big step,” Medvedev said after his Sydney victory, before pondering what it meant to lift a single trophy. “It would have been tough to imagine that, even two years ago.”

Medvedev says his rapid rise stems from a change in mentality during his offseason before the 2018 campaign.

“Starting from last preseason I became much more professional in everything I do, talking about preparation or even life apart from tennis,” Medvedev said. “I started to dedicate my life to tennis. I started to do everything I can to be better in tennis and I’m really happy that it worked out because the worst scenario is when you do everything and it doesn’t work out, then you start asking questions: ‘I am doing everything right, so maybe I should just take it easy and be where I am?’ So I’m really happy that it worked out and I’m continuing [forward].”

Before then, Medvedev admits to going to sleep at 3:00 a.m. the night before matches, not thinking it would mean much. But it would be tough to see the ball, to run, and more. Medvedev changed his habits, and it has shown in his results.

“I became more mature, which is normal. I was never dedicating myself to tennis until that moment. I was always taking it kind of easy and it was still working. I started to be Top 100,” Medvedev said. “I think it’s a lot of influence of my coach. My coach, we have a great relationship, he never tells me you should do this, he says, 'I think this will help you', and then you start asking yourself questions. ‘Is it true what he’s saying? Will it help me?’”

Medvedev has a great relationship with his coach, Gilles Cervara. And in 2017, while they were travelling from Montreal to Cincinnati, they had a memorable conversation at a small airport.

“I was talking with him and I said, ‘Why should I take tennis seriously? Why should I do everything professionally? It takes so much dedication, so much mental strength. I feel like when I do it, nothing works’,” Medvedev recalled. “He was laughing at me, saying, ‘Okay, we’ll see. We’ll see. Maybe you’re right’. Now he’s laughing about this saying, ‘Hey Daniil, do you remember what you said? What do you think about this right now’?” 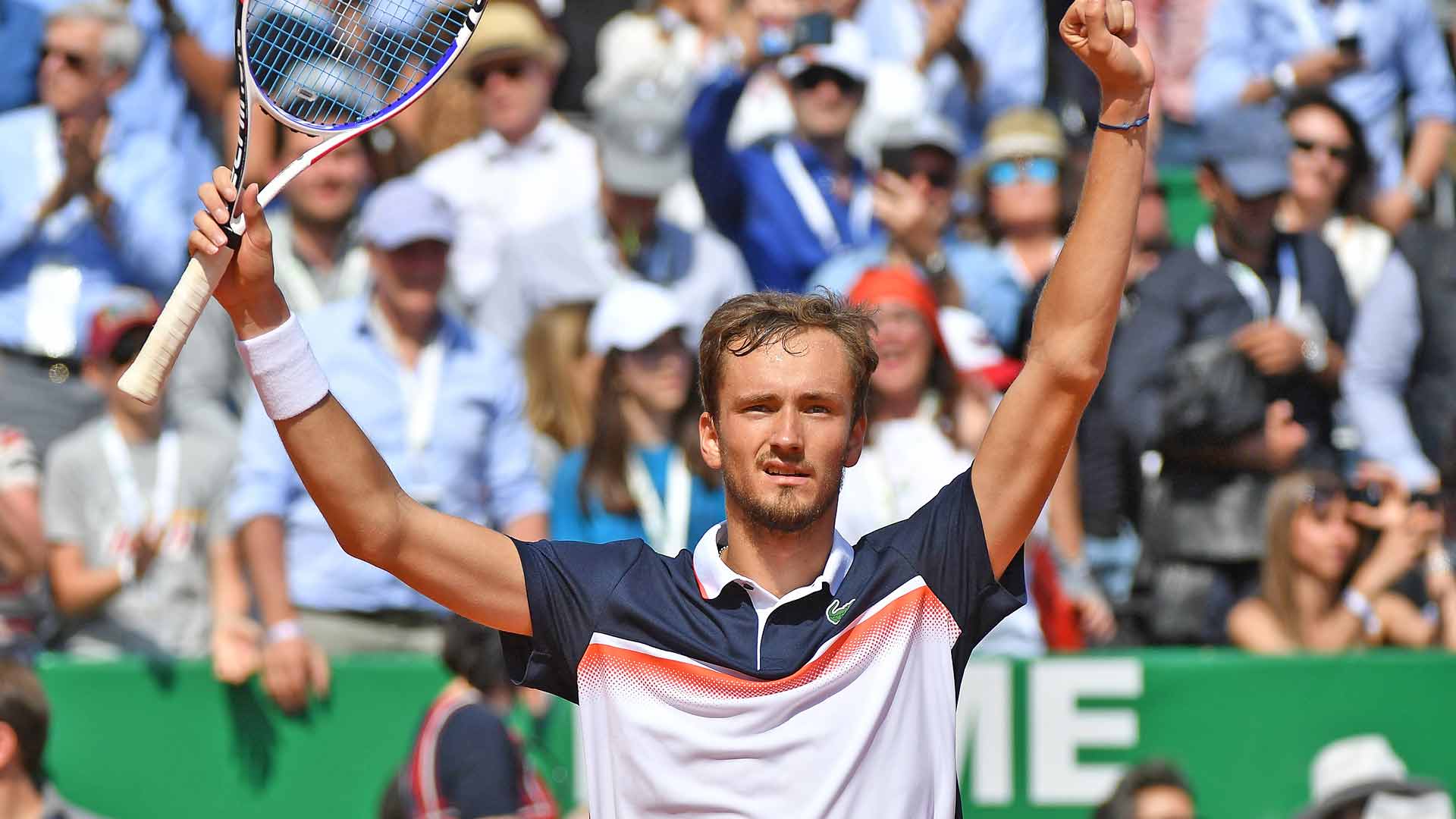 Not only has Medvedev dedicated himself to the sport, but it has paid massive dividends. He has earned three of his four Top 10 wins this season, with two of those triumphs coming en route to his first ATP Masters 1000 semi-final at the Rolex Monte-Carlo Masters.

Medvedev has also put himself in strong position in the ATP Race To London. Currently placed in the final qualifying spot, eighth, Medvedev is trying to earn a spot in the Nitto ATP Finals for the first time. He has appeared at The O2 once before, when he was honoured as the Tecnifibre Young Gun on the Road in 2016. But now he is in position to return to compete in the season finale.