Daniil Medvedev is aiming to become the first Russian man to win the Australian Open since Marat Safin in 2005.

Daniil Medvedev extended his winning streak to 20 matches on Friday, as he advanced to the Australian Open final for the first time with a dominant 6-4, 6-2, 7-5 semi-final victory against Stefanos Tsitsipas.

Aside from a late third-set comeback attempt from Tsitsipas, Medvedev neutralised his opponent’s attacking skills and contested the majority of the two-hour, nine-minute encounter on his terms inside Rod Laver Arena. The World No. 4 landed 46 winners, compared to just 21 unforced errors, and won 88 per cent of his first-serve points (49/56) en route to victory.

“It was definitely not easy, because we saw the match with Rafa was kind of the same score after two sets. [In] the third set, Rafa was dominating but didn’t manage to win the match, so I got a little bit scared and tight," said Medvedev, in an on-court interview. "It is the semi-final of a Slam… It was not easy, but I am happy I managed to switch my game on, especially in some tight moments on my serve and I am really happy to be in the final.”

Across his 20-match winning streak, Medvedev has defeated 12 Top 10 players. The Russian’s most recent loss against a Top 10 opponent came at last year’s US Open, when he fell to eventual champion Dominic Thiem in the semi-finals. Alongside Novak Djokovic, Rafael Nadal, Roger Federer, Andy Murray and Juan Martin del Potro, Medvedev is the sixth active player to record a 20-match tour-level winning streak.

”I don’t have an answer [to explain my run]. I was just working hard all my life and I am really happy at this moment,” said Medvedev. “It is going to stay with me… It is a great achievement.”

Medvedev has earned five straight-sets wins en route to the championship match. The 25-year-old, who battled past Filip Krajinovic in five sets in the third round, will meet eight-time champion Djokovic in Sunday’s final.

Medvedev found success throughout the match by focusing his attack on Tsitsipas’ backhand corner. The Russian proved the more consistent player in cross-court backhand rallies and he redirected the stroke up the line to increase his winner count.

“He was tired after the match with Rafa… During today’s match, I saw that as soon as I was moving him around the court, it was not easy for him," said Medvedev. "As soon as I saw that in the first set, that became my strategy straight away.”

You May Also Like: Tsitsipas On Medvedev: ‘He Tricks You’

Tsitsipas attempted to break the pattern of extended backhand rallies by rushing the net, but Medvedev regularly landed passing shot winners to frustrate his opponent’s efforts. Medvedev was pushed to deuce just once in his opening 11 service games, but Tsitsipas defended well and eventually extracted errors from Medvedev’s racquet to reach 3-3 in the third set. Tsitsipas began to impose himself in rallies and he received vocal support from the crowd, which featured numerous Greek fans.

Medvedev escaped danger on his serve at 4-5, 0/30, and struck pinpoint backhands to halt Tsitsipas’ momentum and earn break point in the following game. Despite being well-known for his muted celebrations after big wins, the Moscow native let out a roar and waved his arms in the air after threading an incredible backhand passing shot up the line to break serve. The nine-time ATP Tour titlist moved to the net and forced Tsitsipas into a backhand error to convert his first match point and reach his second Grand Slam final (0-1). 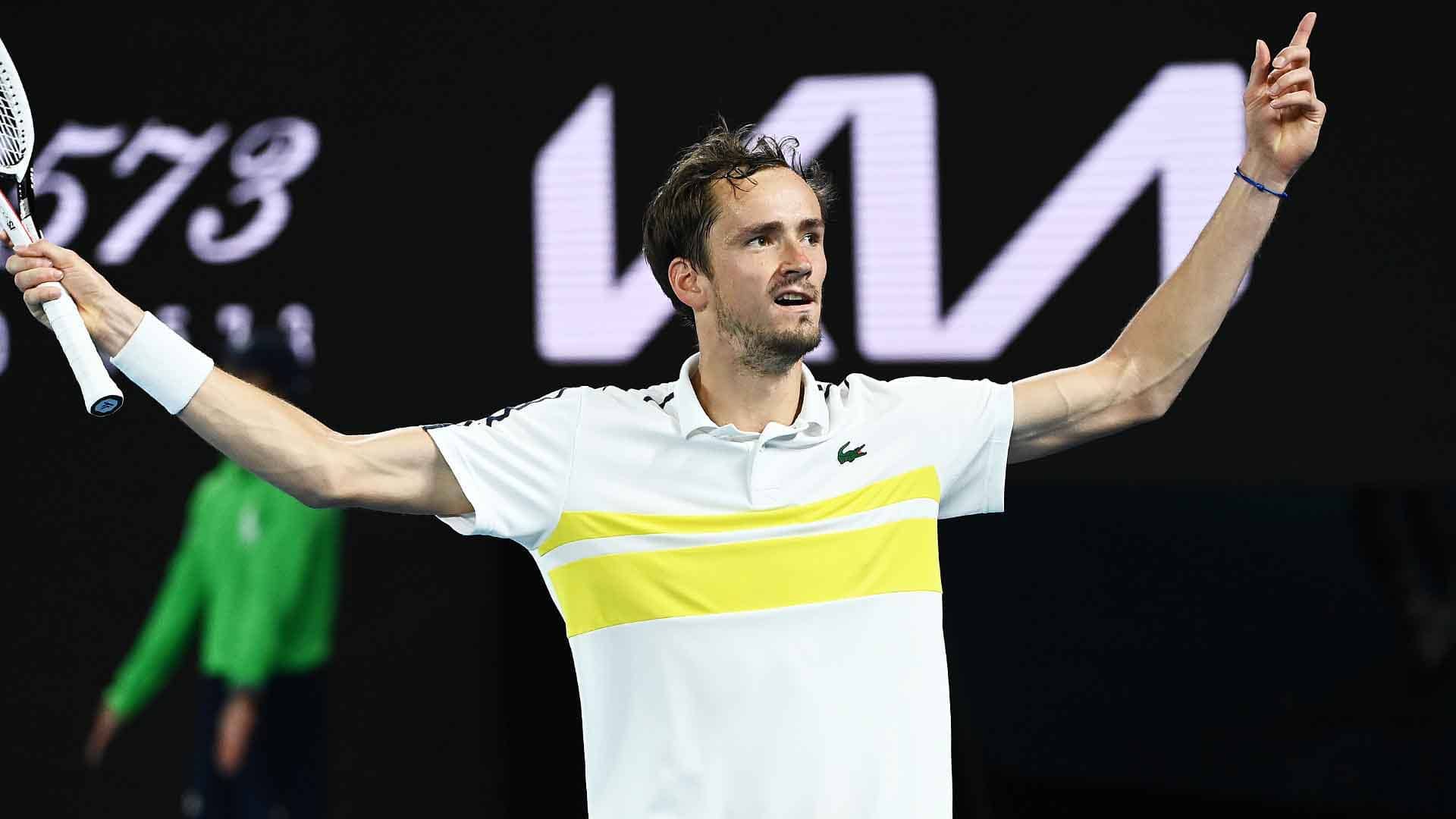 Tsitsipas was aiming to reach his maiden Grand Slam final. The 2019 Nitto ATP Finals champion claimed two five-set victories en route to his third semi-final at a major championship, which included a comeback victory from two sets down against Nadal in the quarter-finals.

“I created some amazing memories during [this event]. I had a very nice stay in Australia… It was a hell of a trip here in Australia,” said Tsitsipas. “I'd like to thank everyone for putting on such an amazing event and show for the players. Not only for the players, but for all the agents, coaches, and crew that came to be part of this tournament and to represent the players.

“Australia has been welcoming me with their arms open, and I love it here. I feel like it's home. I feel blessed when I'm playing here. I feel like everything can only be seen from the bright side, and [the] people are beautiful. It's a really nice place to play tennis. I'll miss it, for sure.”

Medvedev will attempt to become the first player to defeat Djokovic in an Australian Open final (8-0) on Sunday. The 25-year-old owns a 3-4 ATP Head2Head record against the World No. 1, which includes a 6-3, 6-3 victory in their most recent encounter at last year’s Nitto ATP Finals.

”I like that I don’t have a lot of pressure, because he never lost in the eight times that he was here in the final,” said Medvedev. “It is he who has all the pressure, getting to Roger and Rafa in the Grand Slam [leaderboard]. I just hope that I am going to get out there and show my best tennis. As we have seen, I can beat some big names if I play good so that is the main part. He has more experience, but he has more things to lose than me.”