Gilbert: Why Medvedev-Tsitsipas SF Is A 'Totally Different Matchup'

ATP Staff
This article contains:
They are meeting in the Australian Open semis for the second straight year

Daniil Medvedev and Stefanos Tsitsipas could not have taken more different paths through their respective Australian Open quarter-final. Medvedev had to claw back from two sets down to defeat Felix Auger-Aliassime, while Tsitsipas cruised past Jannik Sinner in straight sets.

But according to former World No. 4 Brad Gilbert, it is important to keep in mind that Medvedev plays a completely different game than Sinner.

Medvedev leads the pair’s ATP Head2Head series 6-2, including victories in their first five tour-level meetings. But compared to last year’s Australian Open semi-finals, in which Medvedev beat Tsitsipas in straight sets, the circumstances are different.

In 2021, Tsitsipas entered their clash on the back of a gruelling five-setter against Rafael Nadal, while Medvedev won his quarter-final against Andrey Rublev in straight sets.

The Tsitsipas-Sinner showdown was a meeting between two offensive-minded players who try to get on top of the point. Sinner stays on top of the baseline and tries to blast through his opponents. Medvedev, however, brings a different skillset to the court.

“You’re talking about a guy who plays the best defence on Tour. Sinner doesn’t play nearly as good on defence as Medvedev,” Gilbert said. “[Tsitsipas] didn’t have to press and was hitting beautifully. But maybe all of a sudden that same ball that was getting by Sinner might not get by Medvedev and then maybe he presses and misses. Those are the variables that are different.” 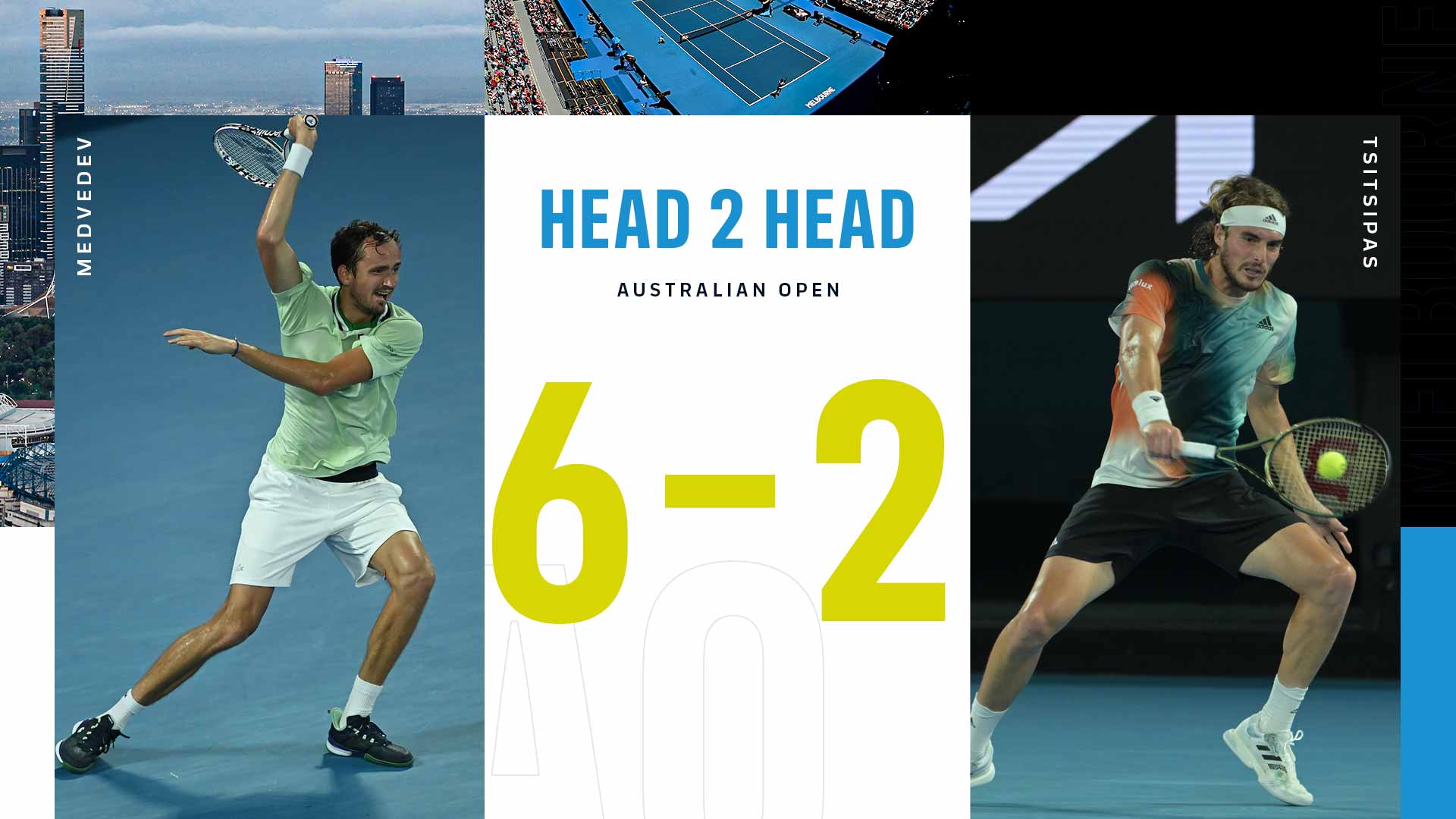 Medvedev is two wins from a historic achievement. No man in the Open Era has won his first major title and then claimed his second in the next Grand Slam. The Russian, who triumphed at last year’s US Open, is trying to do just that. Nadal, who is playing Matteo Berrettini in the other semi-final, is chasing a record-breaking 21st major trophy.

“Everybody gets ahead thinking about it. When you’re in these guys’ shoes, all you’re thinking about is the opponent you’re playing. That’s it,” Gilbert said. “And then when you play the next opponent, you figure out the gameplan for that opponent. That’s what the coach is trying to do, keep it simple, focus on Tsitsipas and that’s it, whether you’re the favourite or not. That’s the matchup.”

Tsitsipas’ first major breakthrough came at the Australian Open in 2019, when he made the last four just months after lifting the Intesa Sanpaolo Next Gen ATP Finals trophy. This is now the third straight year he has made it this far at Melbourne Park.

“He plays better on this court than anywhere else. It’s the third straight year he’s in the semis. I think what’s going to be crucial for him are his return of serve, because I thought the two best areas of his game against Sinner were his return and backhand,” Gilbert said. “They were on point, and I think that will be crucial for him again against Medvedev.”