Matthew Ebden and Max Purcell went the distance for the fifth time this fortnight to claim their maiden Grand Slam title in Saturday's Wimbledon final. The Aussies, who saved eight match points across two matches in reaching the championship match, recovered an early break in the fifth set against Nikola Mektic and Mate Pavic in a thrilling 7-6(5), 6-7(3), 4-6, 6-4, 7-6(10-2) victory.

"People say as a kid they dreamed of winning Wimbledon. I don't even know if I did that," the 34-year-old Ebden said in the champions' post-match press conference. "I wanted to be a professional tennis player, I wanted to get to the Top 10. I started believing these last years we could win Slams and I could do it. But you never know if it will actually happen.

Pavic, who was playing exclusively with his dominant left hand due to a fractured right wrist, put forth a valiant effort alongside his fellow Croatian, but the second seeds fell just short in their bid to retain the Wimbledon title.

After receiving the runner-up trophy, Mektic gave full credit to the Australians.

"It is tough, really, 7-6 in the fifth," he said. "I have to congratulate the guys for this title. They had an amazing tournament, they came back so many times. They defended some match points and here once again they came back from 2-1 [down] with their good level."

The victory for Ebden/Purcell will be even sweeter after they were turned back in the Australian Open final in January at their home Grand Slam. On their title run, they won five five-set matches and two fifth-set tie-breaks, saving three match points in the opening round against Ben McLachlan and Andre Goransson and another five in the semi-finals against top seeds Rajeev Ram and Joe Salisbury. Across six matches this fortnight, they twice battled back from two sets down; they fought back from at least one set down in four matches.

"We've tried to win every match in straight sets," Ebden said. "Every team since the first round, we've had a bloody tough draw, played unbelievable teams every match. Multiple Grand Slam winners, other title winners. The level of doubles is super strong.

"We're sitting here [having] won the title, but first round we could have been out with one point. The level is insane."

In Saturday's title-deciding tie-break, a Purcell return winner clipped the line to open up a double mini-break lead at 5-2, and another made it 9-2 as the Aussies sprinted through the finish line. An Ebden ace — the team's fifth of the match — sealed the deal after four hours, 11 minutes, leading the Australians to celebrate with a synchronized fall to the Centre Court turf.

"My father once told me when he was watching television, you watch guys win Grand Slams, he's like, 'No, it's disrespectful to fall on your back. Shake your opponents' hands first.' That's spoken by a guy who's never won a Grand Slam," Purcell, 24, said with a smile.

"Once you win a Grand Slam, you fall on your back. The grass feels great on your back. I just did that, kind of rolled over, looked at Matt, he was on the ground. I was like, 'Yes, we have done it.' That's as simple as it was."

While the Australians did not need to save a match point in the final, they did save two break points on the Purcell serve at 4-4 in the fifth set. After some untimely unforced errors piled on the pressure, Purcell saved the first chance with a wicked backhand dipper and the second with a 130-mph serve, the fastest of the match. That escape prevented Pavic, who was not broken in the contest, from serving for the title.

Bidding to become the first repeat Wimbledon men's doubles champions since 2008-09 (Daniel Nestor/Nenad Zimonjic), the Croatians were two games away with Mektic serving at 4-3 in the fifth. But Ebden/Purcell, who had started to lock in on return, broke Mektic for the second time in as many sets to restore parity.

After the opening two sets passed without a break of serve, one was enough to claim the third and fourth, with the Aussies roping three clean winners in a row en route to breaking for the set at 4-5 in the fourth. They finished with two breaks on seven opportunities, while the Croatians were two-of-nine on their break chances. 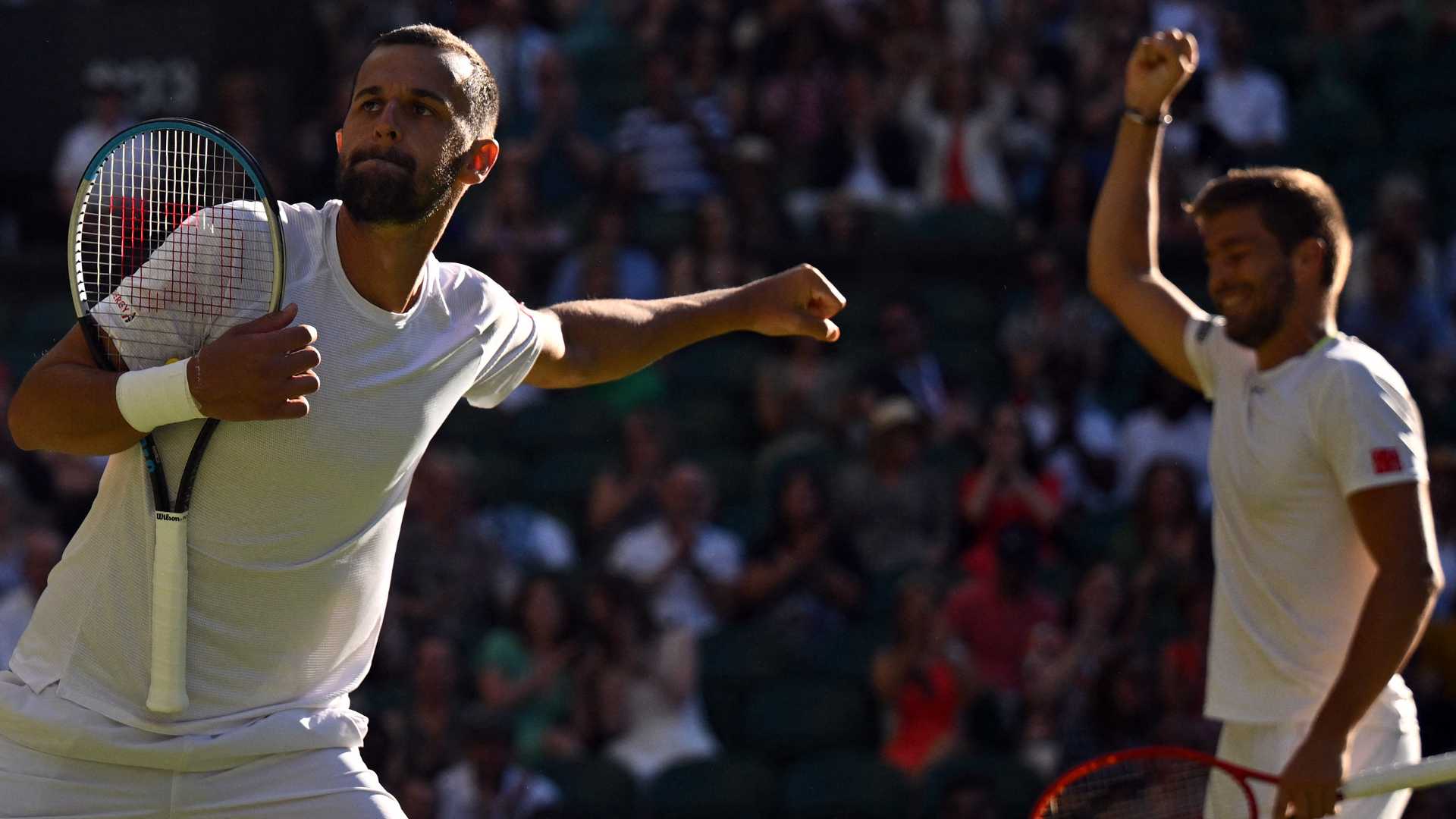 Pavic revealed after the match that he fractured his wrist on a fall in the first set of the semi-final, when he and Mektic saved a match point against 2019 Wimbledon champions Juan Sebastian Cabal and Robert Farah.

"It was tough to handle those two matches," he said. "It was tough to play. Obviously we were close. It's a bit frustrating [when] you're not 100%," he said before crediting Ebden/Purcell for their fighting spirit.

"We gave our best and we gave it a fight, so I think we can be very proud of ourselves for those two matches."

Added Mektic: "These last two matches were probably the most emotional, the best of my life, so I'm grateful."

The Croatians saw a 13-match win-steak ended after they entered the final on the heels of triumphs at The Queen's Club and Eastbourne. They were also on an 11-match run at The Championships as the defending champs.

Ebden/Purcell claimed their second tour-level title of the season after an April victory in Houston.