Milos Raonic is into his fifth Australian Open quarter-final.

Cilic On Raonic: 'He Has A Really Good Chance To Win The Tournament'

Milos Raonic has not lost a service game or a set so far this Australian Open en route to the quarter-finals, in which he will face seven-time champion Novak Djokovic. By the looks of it, the Canadian star is at his top level, playing as well as anyone in the draw.

But somehow, the 29-year-old — backed by a loud game that is highlighted by a booming rocket-like serve — has launched into the second week quietly. Raonic has earned tremendous victories over reigning Nitto ATP Finals champion Stefanos Tsitsipas and former World No. 3 Marin Cilic thus far this fortnight. But entering the event, Raonic was not one of the favourites, or even in the discussion.

Raonic’s current FedEx ATP Ranking is No. 35. Since February 2012, he has spent only four weeks placed that low. Last year, the Canadian played only 14 tournaments, as he dealt with multiple injuries, including back and glute ailments.

“I didn't play much tennis last year, so I think for me the toughest part in this off-season was I knew I did six good weeks of training and I knew it would sort of come together. I was hoping I would play well in the first week of the year, but that didn't happen. I knew I had to be sort of patient for it to come together,” Raonic said. “I'm glad it's paying off pretty early. And now I have to find a way to continue playing well in this tournament, and after that find a way for continuity and try to create some momentum so I can do this week-in and week-out, without having to take long breaks in between and sort of regressing my training and then having to pick up my training again.

“It would be nice to be able to consistently train, and then that way I don't have to really train as hard, because my level isn't falling off because I haven't been bedridden or sitting on a couch for weeks at a time.”

Raonic has dealt with a laundry list of injuries over the years: right hip, right foot, left wrist, elbow, right ankle, right calf and right knee among them. But through it all, Raonic has always found a way to remain a threat. He has not been ranked outside the Top 50 since 14 February 2011, just after his 20th birthday. 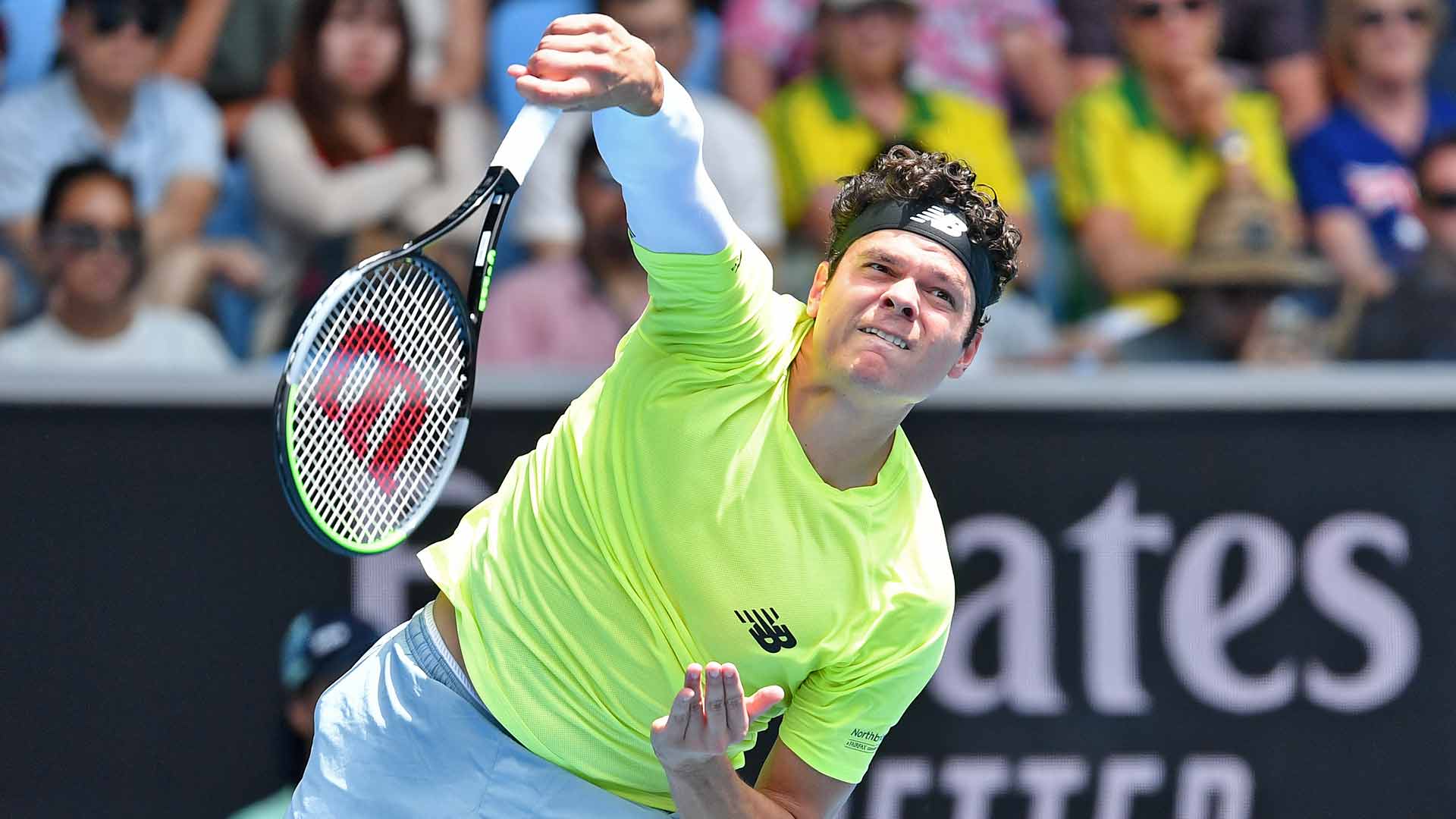 So even though, fresh off a first-round loss in Doha, it didn’t seem Raonic would be a player to watch for, he has proven he should have been. Entering Monday’s play, he leads the tournament in aces (82) and first-serve points won (87%) on top of going four matches — and 12 sets — without being broken.

“Milos played unbelievable tennis and he is just showing that he’s in great form, maybe the best form I’ve seen him during all his career,” said Cilic after losing to the Canadian. “From my own opinion and playing against him, I feel he has a really good chance to win the tournament.”

Interestingly, Raonic believes he didn’t begin the tournament in great form. He only needed three hours and four minutes combined to win his first two matches of the event, but he was still rounding into form in his mind.

“I was really struggling with my serve through the practice week. The first match, it didn't feel necessarily that great because it was a little bit windy on that court. Then the second match, you can sort of feel it that day of warming up. I just sort of found my rhythm,” Raonic said. “I wasn't necessarily sure what to do. Once I get my rhythm and once I have continuity of playing, it comes for me. Serving is the most natural thing for me to do. So once I can figure out, ‘Hey, this is sort of how I need to go about it’, I can sort of work on that.”

Raonic will look to fire up his cannon-like right arm for by far his biggest challenge of the event so far, playing a man whom he has not beaten in nine attempts: the second-seeded Djokovic. They have played 23 sets, Raonic winning just two of them.

“I’m going to have to serve well clearly, and then I think I'm going to have to get my return at a high percentage, make him play a lot of those points, and then try to be efficient on my service games,” Raonic said. “I think we play quite opposite from each other, and he's done a good job in the past neutralising my serve. So I have really got to focus on my things well and be the one dictating.”

Although the pair’s ATP Head2Head rivalry has been one-sided thus far, Raonic does have weapons he brings to the court. Just ask Tsitsipas, whom Raonic dispatched without facing a break point.

“He's playing forehands from all over the court, and you don't really know where you should stand exactly, because he's just so fast and just turning around, hitting those forehands. Serve is great, one of the best in the game,” Tsitsipas said. “I felt a bit stupid returning his serves. I felt like I was slow. My anticipation was not there.”

Entering this tournament, the Canadian hype was surrounding #NextGenATP stars Denis Shapovalov and Felix Auger-Aliassime, who both were upset in the first round. But Raonic, as he has for nearly a decade, remains a threat, set to compete in his fifth Australian Open quarter-final and his 10th quarter-final at a Grand Slam. It didn’t matter that he wasn’t the focus of attention as far as Canadian players go.

“Couldn't care less,” Raonic said. “I just care about how I'm playing and feel on the court.”

Raonic is feeling well at the moment, and he hopes that will propel him even further in Melbourne.