ATP Staff
This article contains:
The Belarusian totaled 53 titles in 22 years as a professional tennis player

‘The Beast’ is hanging up his racquet. After 22 years as a professional, Max Mirnyi, former No. 1 player in the ATP Doubles Rankings, has announced his retirement.

“I have come to a decision that the 2018 season was my last year competing professionally,” Mirnyi said. “It was a very difficult choice for me to make as tennis has been my life ever since I can remember myself. I was fortunate to achieve far beyond what a little boy from Minsk, Belarus, could have dreamed of.”

Mirnyi climbed to the top of the ATP Doubles Rankings for the first time on 9 June 2003, and he would spend 57 weeks atop the doubles mountain, good enough for 15th all-time. The Belarusian won 52 tour-level doubles titles (52-46), and Mirnyi recently finished his 20th consecutive doubles campaign inside the Top 100. As a singles player, he ascended as high as No. 18 in the ATP Rankings, and won 244 tour-level matches, including 16 victories against Top 10 opponents.

Mirnyi completes his illustrious career with a combined 1,024 match wins in singles and doubles, and he did not slow down in his final season. The 41-year-old, alongside Philipp Oswald, captured titles at the New York Open and the Fayez Sarofim & Co. U.S. Men’s Clay Court Championship. 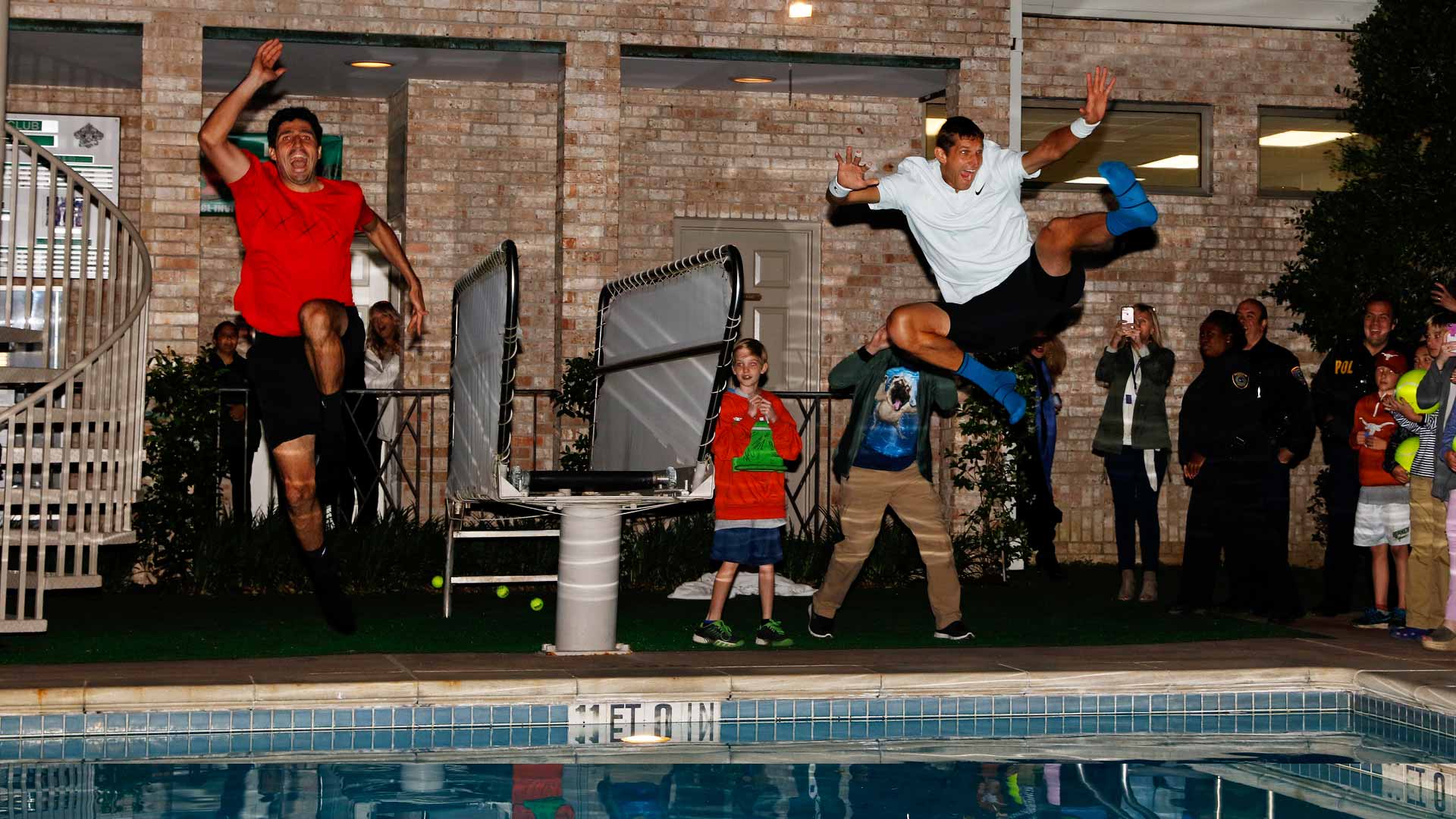 You May Also Like: My Title: Mirnyi Remembers 2003 Rotterdam

Many will look back on Mirnyi’s standout career and think of his doubles success, but the Belarusian also performed well on the singles court before exclusively focusing on doubles in 2009. Mirnyi won the 2003 ABN AMRO World Tennis Tournament in Rotterdam, moving through a daunting set of opponents in Federer, Yevgeny Kafelnikov, Ivan Ljubicic and Mario Ancic before defeating Raemon Sluiter in the final. Mirnyi also advanced to the final at the ATP World Tour Masters 1000 event in Stuttgart in 2001, defeating three players — Gustavo Kuerten, Pete Sampras and Yevgeny Kafelnikov — who reached the No. 1 ATP Ranking in their career, as well as former World No. 2 Goran Ivanisevic, along the way.

“Throughout my whole career I always did the best I could and treated my profession with honour and respect. Now it’s time for me to move on with my life and accept new challenges,” Mirnyi said. “I will miss the game greatly but for certain I will continue to follow it closely and love it from the sidelines. I thank everyone who took part in my development as a tennis player and as person.”

Did You Know?
Mirnyi won at least 25 tour-level doubles matches in 19 of his final 20 seasons, including 2018.

Max Mirnyi Statement
I would like to announce today that I have come to a decision that the 2018 season on the ATP World Tour was my last year as a professional player.

It’s been a very tough choice to make considering that the game of tennis has been my life ever since I can remember myself. I am absolutely thrilled to have had a chance to enjoy this game for so long!

While competing for myself or representing my country I have always treated my profession with the highest honour and respect, worked at it as hard as I could and now, stepping away from the game, I have no regrets and feel nothing but joy. I have achieved far beyond what a little boy from Minsk, Belarus could dream about at the beginning of the road.

My journey would not be possible without the continued support of my family. I owe it to my mother and father for teaching me life and sports from a young age. Very early my father became a key figure in my life, advancing with me through all levels of the game as my coach, manager and a friend. My wife and my kids gave me tremendous support and always inspire me to keep going forward.

Also, along the way I was very fortunate to meet outstanding coaches who helped me shape my game and character. Here I would like to acknowledge them and show my love to them once again:

My junior coaches Valeriy Lavrenov and Arcadi Edelman from “MAZ" tennis school: Thank you for building a good foundation and helping me fall in love with this game!

Mr. Nick Bollettieri, your family and your staff: Thank you for providing me with a home away from home at the IMG Tennis Academy in Florida. Believing in me at the time when the wins were very tough to come by and to this day you continue to be monumental in my development as a player and as a person.

Alexandr Dolgopolov Sr: Thank you for letting me be part of your family and for all your efforts in preparing me for the physicality of this sport and life on Tour. I really learned a lot from the time together and it helped me push my limits many times throughout out my career. Your wife’s lessons on flexibility planted a very valuable seed as a result of which I avoided many common injuries of the sport.

Bob Brett: Thank you for being in my corner and always providing me with very valuable advice, introducing me to Nike Tennis, which turned out to be my only apparel sponsor during my whole career.

Fritz Don: The most positive and optimistic person I have met. You helped me look at the methods of training in a different way. Tennis was always fun with you.

Brian Teacher: You made me understand the biomechanics of tennis. Your introduction to yoga helps me to stay balanced on and off the court to this day.

Scott Davidoff: I appreciate your assistance in helping me in a tough transition from my career No. 1 to career No. 2 — doubles only. Your endless scouting reports, knowledge for the game and support off the court helped me to be on the winning end of the biggest events and get excited about making career No. 2 last.

Peter Mirnyi: You pushed me with always a good vibe and your brotherly love at the time when more losses were creeping into my records and it was very easy to get negative and stop. However, we didn’t and had some memorable moments towards the end of this song.

My fitness coaches, Anthony Blair and Yutaka Nakamura: At different stages of my athletic development you recognized the most important areas where my wide and long body needed the most attention. With your help I always felt I had a physical edge over my opponents and surely never lost a match due to lack of preparation.

My medical team that looked after me and made sure I have the best chance to compete at the highest level. At different times each one of you played a crucial role into my longevity: Igor Golovnev, Pavel Malashevich, Alexsandr Razumets and Ivan Bury-sport doctors and trainers Team Belarus. Dr. Simon Small-Philadelphia (foot supports), Dr. Di Giacomo-Rome (ankle), Dr. David Dines-NY (shoulder), Dr. Angel (Barcelona) and Dr. Christopher Sforzo-Sarasota (elbow).

I will never forget the next group of people without whom my climb would also be impossible. Around the globe friends with their financial or moral support, often providing housing that helped Nikolai and I get past some difficult times.

For your professional and legal guidance I would like to thank my three special friends and agents: Max Eisenbud at IMG, Lisa Somermaier from Sunset consulting and Vittorio Selmi from ATP.

I would like to also address the Belarus Tennis Federation with your CEOs Simon Kagan, Mikhail Pavlov, Vladimir Peftiev, Sergey Teterin and Aleksandr Shakutin and thank you for your trust in me, the Belarus Ministry of Sport for always attending to my needs and electing me to represent the country for this long. It was a great honour and pleasure for me to do so around the world. Being the flag bearer for Team Belarus and winning a gold medal at the Olympics in London was by far the most memorable and proudest moment in my life.

I want to thank ATP and your staff for providing me with the most incredible working environment, taking me to places where I otherwise would have never been. Caring for me and guiding me on a daily basis.

To ITF, for letting me become part of your historic events and having my most memorable experiences with you.

Nike and Wilson, you have been my biggest supporters during my whole career. I am grateful that you spotted me early and stayed with me to this day. It has been an absolute honour and pleasure to be one of your athletes. You have always responded to all of my needs and gave me the chance to use the latest equipment and newest technologies. It made it so easy to keep my focus and just on the job! Thank you.

Special acknowledgment goes to all 100 of my doubles partners from 1994 to 2018 with whom I have an individual story to tell and who helped me installed a brick, large or small, in building my career wall. Thanks again to you, guys! We had a blast!!!

And lastly, I wish to thank and hug all of my fans who gave me love and support, who cheered with me in moments of glory but more importantly those that lifted me time and time again at different part of the world when matches and tournaments were lost and times were tough. You gave me the strength and motivation to wake up and keep working.

I will never forget what it is like to play in front of you, be it on the practice court or a packed house.

Going forward, it's time for me to move on with my life and accept new challenges.

I will miss the game greatly, but for certain I will continue to follow it closely and love it from the sidelines.