Mischa Zverev talks about his remarkable comeback to the Top 70 in 2016 and the inspiration his younger brother, Sascha, has been in the process.

Mischa Zverev: Back From Rock Bottom

German has had remarkable comeback in 2016

In March of 2015, Mischa Zverev had almost dropped out the Emirates ATP Rankings. After reaching a career-high No. 45 in July 2009, the German fell victim to a catalogue of injuries that saw him drop as far as No. 1067. But, inspired in no small part by his little brother, Sascha, Zverev has staged a remarkable comeback in 2016.

As he sat by the side of the court watching his brother practise in Stockholm, Zverev told ATPWorldTour.com, "I'm very, very happy. It's been five years since I've seen myself in the Top 100. It's been a long road with physical and mental injuries, but I've made it back into the Top 100 and I'm going to finish this year in the Top 100 for the first time in five years.

"A big factor was my brother because he really pushed me and he made me work hard again and try to do the best I can. He's been doing really well the past couple of years and I didn't want to be too far behind him. I think we helped each other because we practised a lot together and tried to challenge each other and make each other better. I feel like I can still play well and do some damage here and there and I just tried to focus a little bit more.”

#NextGen star Alexander Zverev has spent most of his 19 years around a tennis court thanks to big brother, Mischa, whom he used to look up to and travel with from a young age. But while Sascha’s star has soared in the past two years as he surged towards the Top 20, it was been a role reversal for the Zverevs, with Mischa supporting his little brother as injury after injury took hold.

Many players would have quit the game had they dealt with Zverev's series of misfortunes. Struck down by a fractured wrist, two fractured ribs, a herniated disc in his lower back, a small tear in the patella tendon in his knee, Zverev finally hit “rock bottom” in 2014, after undergoing surgery on his wrist. Stuck at home while Sascha, 10 years his junior, saw his career start to take flight, Mischa was left to contemplate life without tennis.

Determined to stay involved in tennis, Zverev began travelling with two 18 year olds, friends of the family, who were competing at Futures tournaments. It didn’t take long for him to realise that he missed playing. Taking baby steps, Zverev once again held a tennis racquet, before progressing to backhand slices and much later to forehands.

“There were times when I just didn't feel like working hard or playing because I wasn't very successful,” he recalled. “I wasn't playing well, plus I had injuries, so it was a combination of all those things together that really didn't make it easy. [Coaching the youngsters] helped me realise how nice tennis is, how important it is and how much I miss it when I'm injured. It made me work even harder.

“It's not easy, because the best thing you know how to do is play tennis. If that's taken away from you, you end up with not much else. Thankfully I have a family that really supports me and a brother that's been doing well. He's a big support too, because in his mind he says, 'No, you're not quitting tennis. You're going to play as long as I play.' The other day I said as a joke, 'I'm going to quit the day you quit.’ Because I wouldn't want him to travel by himself and me sitting at home doing nothing. I enjoy travelling and practising with him.” 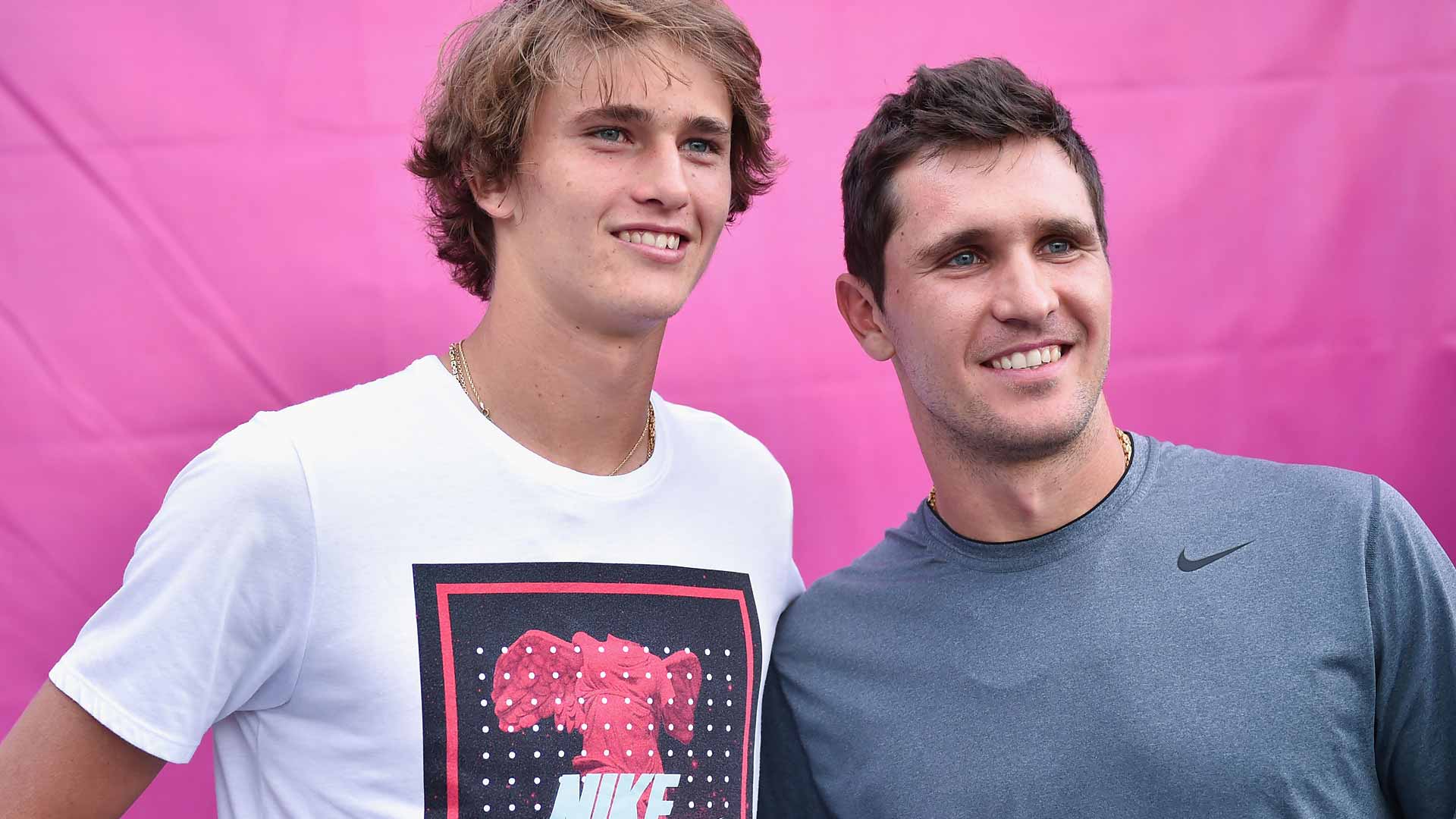 The Zverev family unit is a strong one. They all travel together – Dad, Alexander; Mum, Irena; Mischa; Sascha; their puppy, Lövik; and sometimes even Grandma. "[Travelling as a family] makes it a lot more fun,” said Mischa Zverev. “You don't want to go home because you have all your family with you. There's weeks when I don't do too well, but then Sascha does really well, so it still ends up being a good week because you have a lot of positive emotions. There's weeks when we both do well and it's just an incredible feeling. I think it definitely helps me, because I like to be around family."

After qualifying into tour-level events eight times in 2015, it was not a prospect that Zverev relished repeating in 2016. But, after a rocky start to the season, the 29 year old has now qualified a record 10 times on the ATP World Tour.

“It didn't look too good at the beginning of the year because I lost a lot of qualifying matches,” he said. “But the past four or five months have been incredible. In the summer I was hoping for a really good grass-court season and it happened to be one of my worst. But somehow I turned everything around with the help of the team. I talked to Jez (Green - physical trainer), my brother and my Dad and they really pushed me and made me work even harder.”

The hard work has certainly paid dividends. Earlier this month, Zverev reached the second ATP World Tour Masters 1000 of his career at the Shanghai Rolex Masters, where he pushed World No. 1 Novak Djokovic to three sets. It was quite the feat, considering two hours before the sign-in deadline a few days earlier he had been looking at flights to Mexico and Vietnam, ready to fly to a Challenger if he didn’t make the qualifying cut in Shanghai.

“After the tournament I was laughing because I'd been so close to flying to the Monterrey Challenger in Mexico to play qualies, and now I was in the quarters of a Masters 1000 and kind of belonging to the best eight players in the world,” said Zverev. “Life can change so fast, especially in the tennis world. I proved to myself and everyone else that I can still work hard and play well. It all paid off and it was an amazing feeling.”

The run in Shanghai saw Zverev leap 42 spots to return to the Top 70 of the Emirates ATP Rankings, his highest position since October 2009. But he hasn’t stopped there. After qualifying into the Swiss Indoors Basel this week, Zverev knocked out home favourite and World No. 3 Stan Wawrinka in Friday’s quarter-finals to record the biggest win of his career. It was his fifth Top 10 win and first since 2010 Shanghai (d. No. 6 Nikolay Davydenko).

It’s an achievement that will certainly push him closer to his next goal. "I want to beat my best ranking,” said Zverev. “I was ranked 45 in 2009, and I want to be at least 44 someday. It's a tough and long way and tennis is improving every couple of years. But I want to do it and I think I can do it and hopefully next year I can finish off with a career-best ranking and hopefully some more victories.”