On Tuesday, the North West University Potchefstroom was abuzz with excitement. An 18-year-old from South Africa was sending shockwaves through the tennis facility and across the ATP Challenger Tour.

The scene was set. It was an electric atmosphere on a perfect, sun-kissed afternoon in the university town of Potchefstroom. The youngest South African player in the FedEx ATP Rankings had just scored the biggest win of his burgeoning career.

"Let's go!", screamed Kholo Montsi. The teen let out a roar and repeatedly smacked his chest in triumph, as he earned his first victory on the Challenger circuit. An abundance of energy, enthusiasm and charisma were on full display as Montsi completed a 6-4, 6-1 victory over sixth seed Brayden Schnur.

Schnur is a former World No. 92, but his 18-year-old opponent was not intimidated. Far from it. As Montsi says, he relished this opportunity to test his talents on such a big stage.

"I was telling myself that I have nothing to lose," Montsi reflected. "It was about using this opportunity and I went out there and started fighting. I'm very happy."

It was a valuable experience for South Africa's rising star, as he embarks on his professional journey. Building confidence against the Challenger Tour's top talents is critical for any young player, and that is exactly why Tennis South Africa invested in bringing the circuit back.

This month marks the return of the ATP Challenger Tour to South Africa, after an eight-year hiatus. Located less than two hours west of Johannesburg (the country's largest city), Potchefstroom is a well-known university town in the North West Province. Last week, the PotchOpen I signaled the country's first Challenger tournament since 2013. And this week, it is hosting the second of back-to-back Challenger 80 events. With the goal of putting the tennis-rich nation back on the map, they are establishing a new era in 2021. It all starts with providing their home grown talents with opportunities to mature and thrive.

South Africa has long played a significant role in the history of men's professional tennis. The likes of Kevin Anderson, Kevin Curren, Wayne Ferreira and Johan Kriek reached the Top 5 of the FedEx ATP Rankings, while Byron Black, Wayne Black, Raven Klaasen and Kevin Ullyett cracked the Top 10 on the doubles circuit.

The country welcomed some of the game's best for many years, hosting an ATP 250 event in Johannesburg until 2011. On the ATP Challenger Tour, the Soweto Open was held until 2013 at the historic Arthur Ashe Tennis Centre. 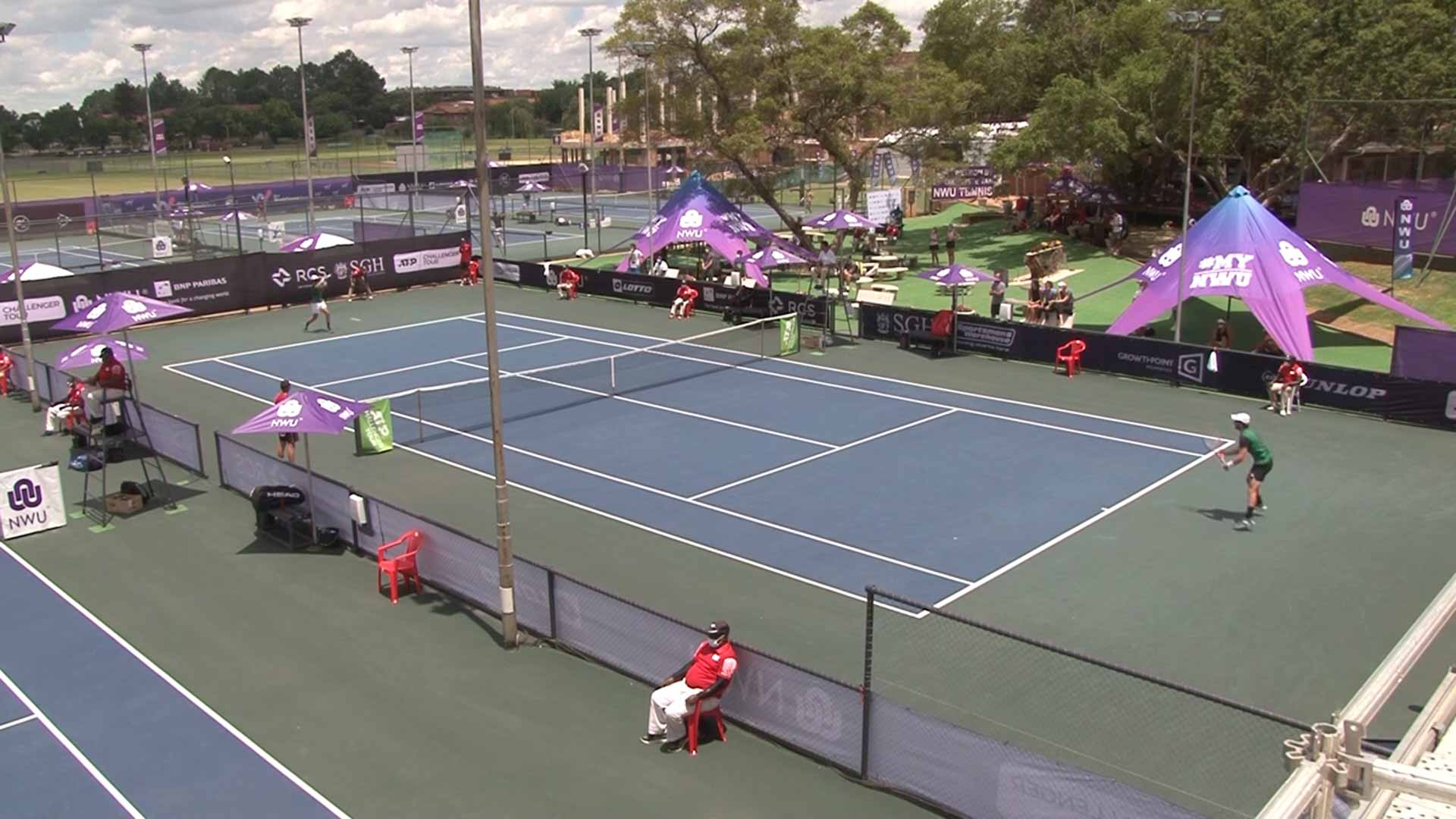 For Montsi, the Cape Town native is making strides since appearing at the 2020 ATP Cup as part of Team South Africa. It was there that he soaked in the world-class atmosphere and learned about life as a professional, while enjoying a front-row seat as his countrymen battled the likes of Novak Djokovic and Nick Kyrgios.

Two of his ATP Cup teammates - Raven Klaasen and Ruan Roelofse - are also in Potchefstroom, competing as the top seeds in doubles. For them, being able to return to their roots and inspire the next generation of South African players is essential.

"Coming up as a junior, you have big aspirations to compete at the top," said Klaasen. "When you can see this level of tennis in front of you in your home country, it plants a seed for where you might go one day with your dreams. Getting this exposure is valuable for younger players."

"For myself, it's about leading by example," added Roelofse. "To be professional on and off the court and make kids excited about tennis and want to be like us. This is what we're trying to achieve."

What a moment! 18-year-old 🇿🇦 Kholo Montsi earns his first #ATPChallenger victory with a 64 61 win over Schnur in Potchefstroom.

Tennis South Africa CEO Richard Glover sat down with ATPTour.com to discuss the return of the ATP Challenger Tour and the future of the sport in his country...

What do you hope the impact of these Challenger tournaments will be, as South African tennis continues to grow and develop?
Over the decades, South Africa has always been a vibrant tennis nation. But, one of the biggest challenges has been our location. Geographically, we're on the southern tip of Africa, so we're a long way from the rest of the tennis world. That's been a real issue for the growth of the sport in this country.

Being able to host back-to-back Challenger 80s, as we have done these past two weeks, is massive for men's tennis in the country. Critically, it gives our up-and-coming rising stars the ability to play good quality international tennis in home conditions. That's a big advantage and a really good stepping stone for our rising stars.

You look at someone like young Kholo Montsi, an 18-year-old we have high hopes for in the future. He won his first-round match here for his first ever ATP Challenger win. I think that's a great example of a springboard for a young man who's looking to make it as a professional player.

After so many years, how proud are you to have Challenger tennis back in South Africa?
At one stage, because of COVID, we weren't sure if we could host these two back-to-back events. So it's a bit of a relief to be able to do it. I think many people don't understand the calibre and standard of tennis that's played on the ATP Challenger Tour. These are some outstanding athletes competing at this level. I've been blown away by the quality of the tennis. There truly are some future stars here. These tournaments can launch the careers of not just South African players, but those from all over the globe as well. I'm very proud to have Challenger tennis back.

What is the long-term vision for tennis in South Africa and how do these tournaments play a role?
From a Tennis South Africa perspective, what we're busy with at the moment is really trying to strengthen the foundations of the sport. That is, increasing participation. We've managed to bring several sponsors into the sport, which is important as we look to continue investing in tournaments. Obviously, hosting international tournaments is the fundamental building block.

I think, referring back to Kholo Montsi again, he's made some news in South Africa after winning his first match on the ATP Challenger Tour. It's great for a sport like tennis, as we're competing against a lot of other sports for eyeballs and attention. But let's not forget about someone like Raven Klaasen, who is a Top 20 ATP doubles player. Unfortunately, due to COVID he was unable to travel to the Australian Open, but he decided to support his local tennis and play in the Challenger which is fantastic. Overall, it's been a very positive first step, but there's a lot of hard work to do. We want to bring even more international events, even more ATP Challengers and ultimately an ATP 250 to the country. If and when we do that, I think we can really say that tennis in South Africa is back on the map.

How can these tournaments inspire other African nations to develop their tennis programs and enter the professional landscape?
There is so much untapped athletic potential in Africa. You see it in so many other sports, but why not tennis? There is huge growth potential for that reason. I can't say what's best for other African countries, because they are all different and have their unique challenges and advantages as well.

But from our perspective, the thing that we've seen in trying to grow tennis in this country is that there are some fundamental principles that you need to put in place. If you do, I think you can grow. You need to have a clear vision of where you want to take the sport. And to have a plan to back up that vision. It needs to be underpinned by good governance and principles and ultimately show signs of progress. I think those are the fundamental tools to grow the sport throughout Africa.

The Soweto Open was such an iconic tournament on the Challenger Tour. Are you considering bringing it back in the future?
I think we would definitely like to bring it back at some point. It is an iconic event, held at the Arthur Ashe Tennis Centre in Soweto. Arthur Ashe has a deep connection and history within this country. I think it's something we would look to bring back in the future.