Former World No. 1 Andy Murray faces a stern test in the first round of the Australian Open against Doha champ Roberto Bautista Agut.

Roberto Bautista Agut vs. Andy Murray
If Murray was looking for a match to play his way into form, he did not receive that when the Australian Open draw came out. The former World No. 1 may lead Bautista Agut 3-0 in their FedEx ATP Head2Head rivalry, including a win in the final of the 2016 Rolex Shanghai Masters. But the Spaniard just triumphed at the Qatar ExxonMobil Open, where he upset Novak Djokovic, beat former World No. 3 Stan Wawrinka and defeated a sharp Tomas Berdych in the final.

Bautista Agut’s game may not follow what you might expect from a Spaniard, as he hits a flatter ball than many of his compatriots. But nevertheless, Bautista Agut makes his opponents play a lot of balls, and makes few mistakes. When he is firing on all cylinders and is comfortable going after his shots, even the very best players in the world need to be at their best to come through.

So former World No. 1 Murray will need to be at his top form if he hopes to avoid his first opening-round exit at a Grand Slam since the 2008 Australian Open. If Murray plays defensive tennis behind the baseline, relying on his legs to win him this encounter, it may be a difficult day for the Scot. But if he is feeling the ball well and willing to step into the court and be aggressive, this match may be what Murray needs to spark a return to the top of the sport.

Kyle Edmund vs. Tomas Berdych
Edmund broke through in a major way last year in Melbourne, advancing to the semi-finals. The British No. 1’s tremendous run started with a difficult opening match-up against eventual Nitto ATP Finals qualifier Kevin Anderson, a clash that would go five sets. Edmund’s first-rounder is no easier this year, as he confronts Doha finalist and former World No. 4 Berdych.

Berdych won the pair’s only previous FedEx ATP Head2Head meeting at 2016 Doha with the loss of just five games. But Edmund was just 20 at the time, and Berdych was the No. 6 player in the ATP Rankings. Now, the Czech is at the beginning of his comeback from a back injury that kept him out for six months after the Fever-Tree Championships last year. However, Berdych looked sharp in his first tournament back, in Doha, where he lost in a thrilling three-set final against Bautista Agut.

Edmund, who claimed his maiden ATP Tour title in Antwerp less than three months ago, has the more heavier forehand of the pair, and if given time, can control play with that shot. But Berdych does a good job of staying on top of the baseline against all of his opponents and dominating rallies with first-strike tennis. If he can do so against Edmund, this may be a match to remember.

Milos Raonic vs. Nick Kyrgios
Of all the first-round match-ups in Melbourne this year, the big-serving Raonic and the talented Aussie Kyrgios could have met in the second week of the year’s first major. In fact, Raonic defeated a 19-year-old Kyrgios in the quarter-finals of Wimbledon in 2014. They are now knotted at 3-3 in their FedEx ATP Head2Head series, with Raonic claiming their most recent meeting in three sets at The Queen’s Club in 2016.

Raonic and Kyrgios are two of the biggest servers in tennis. They have played at least one tie-break in each of their previous clashes. So while you can expect both of them to win a slew of free points, the difference may very well be who can initiate the first strike in rallies when points do extend beyond a few shots. Kyrgios is the more dynamic of the two players from the baseline in that he has more variety with his strokes — the World No. 51 can blast forehands or create angles off that wing, while his backhand is simple and efficient. Raonic on the other hand hits a flatter ball, especially with his forehand, and is unafraid of playing first-strike tennis, using a big shot to then go even bigger on the next ball or go to net.

Expect the difference to be just a few points here and there in front of Kyrgios’ home crowd. Whomever is able to convert on a higher percentage of their break point opportunities or even mini-break chances in what are seemingly inevitable tie-breaks may advance to the second round to face the winner of former Top 10 players Stan Wawrinka and Ernests Gulbis. 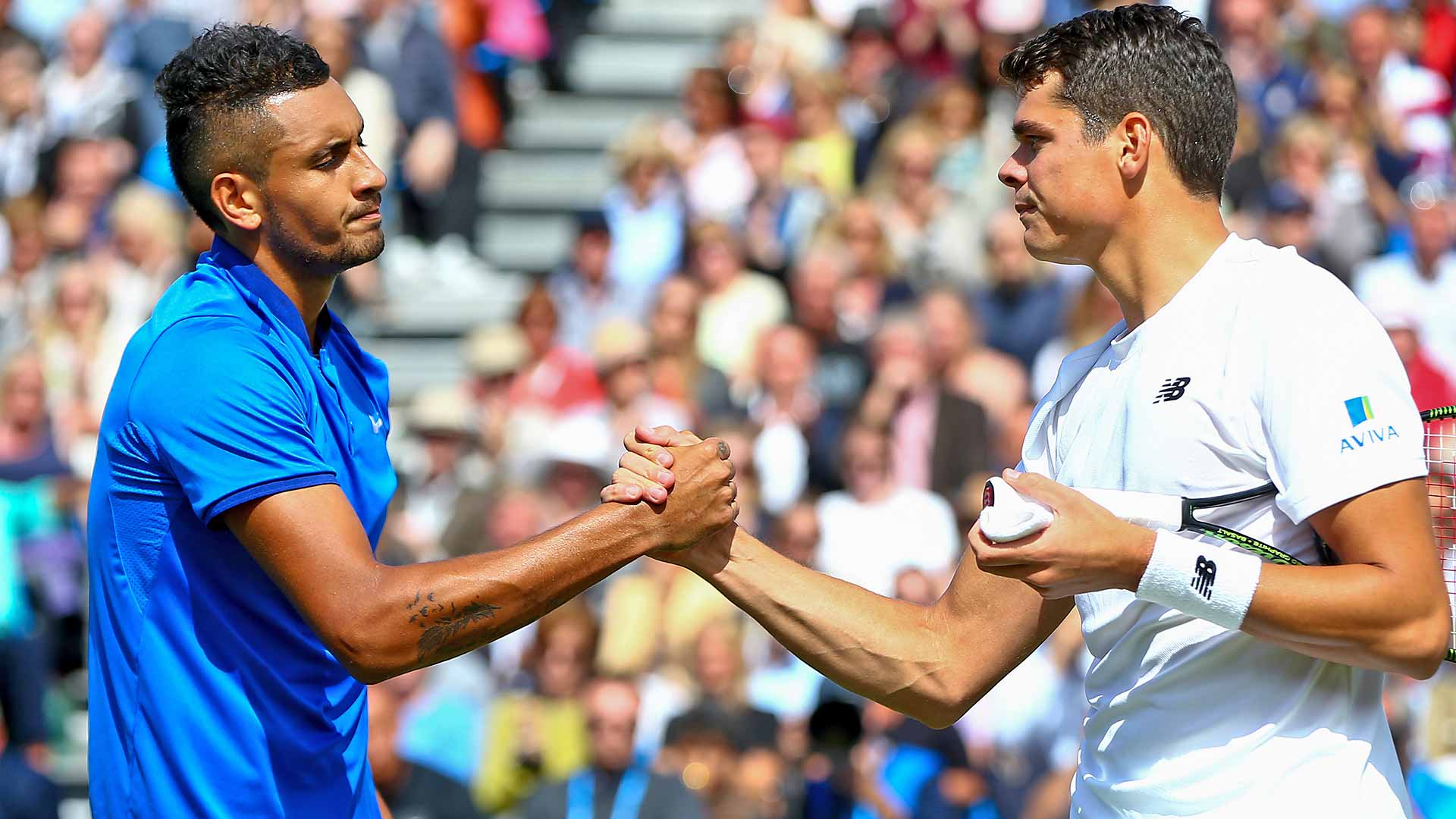 Marin Cilic vs. Bernard Tomic
One year ago, Cilic came within a set of claiming his second Grand Slam championship, falling just short in a five-set thriller against Roger Federer. On his return to the Australian Open, the Croat received a tricky draw in the first round against former World No. 17 Tomic. While the Aussie is currently No. 85 in the ATP Rankings, Tomic won his first ATP Tour title in more than three years in September at Chengdu.

These two talented ball-strikers have only played once since the 2011 US Open — in Montreal in 2015, won by Tomic — but Cilic has won two of their three FedEx ATP Head2Head meetings. Tomic is the sort of player who can take opponents off their game. The Aussie is almost never the first player to initiate aggression in a rally, preferring to place his shots so as to make opponents uncomfortable. And then, after placing them on the back foot, Tomic is happy to go after the ball.

But Cilic is one of the favourites to make a deep run in Melbourne, and if he is able to use his typically strong serve placement to elicit short returns, he might not give Tomic much of a chance in rallies with his massive first strikes. Can a home favourite thrill the Australian crowd and oust a tournament favourite?

Stan Wawrinka vs. Ernests Gulbis
There are two first-round match-ups in Melbourne between players who have cracked the Top 10 in the ATP Rankings (also Dimitrov vs. Tipsarevic). But the clash that stands out the most is former World No. 3 Wawrinka against 2014 Roland Garros semi-finalist Gulbis. These two veterans have competed against one another just once before, and that was a Wawrinka win nearly nine years ago at 2010 Monte-Carlo.

The 30-year-old Gulbis has shown he has plenty of tennis left in him, winning three consecutive five-setters at Wimbledon last year, including a third-round win against Alexander Zverev. But Wawrinka showed some of his vintage form in Doha, where he ousted talented World No. 11 Karen Khachanov in straight sets. Both players’ stronger wing is the backhand side. So perhaps the player who is able to best deal with pressure on their forehand side will advance to face Raonic or Kyrgios.

Honourable Mentions
John Isner vs. Reilly Opelka
This is the tallest Grand Slam match-up in history, as Isner (6’10”) looks to back up his career-best 2018 season against Opelka (6’11”), who is competing in just his second Grand Slam main draw.

Dominic Thiem vs. Benoit Paire
If you are a fan of the backhand, this is a must watch. Thiem is one of if not the most physical players on the ATP Tour, with a bruising one-handed backhand, while Paire, who owns a strong two-hander, has some of the best racquet skills out there.