Former World No. 1 Andy Murray poses in front of his portrait by British artist Maggi Hambling.

Murray In Paint: Maggi Hambling's Portrait On Display At Wimbledon

For more than 15 years, Andy Murray has carried the torch for British tennis at The Championships. So when he was asked to sit for artist Maggi Hambling, whose art work he collects, the 2013 and 2016 Wimbledon champion jumped at the opportunity.

Hambling’s portrait of the former World No. 1 was originally unveiled in March 2020 at the National Portrait Gallery in London, just one week before the gallery's closure due to the global COVID-19 pandemic.

This week, Murray stood beside Hambling’s portrait, which has gone on display at the Wimbledon Lawn Tennis Museum, as part of the National Portrait Gallery’s ‘Coming Home’ project that sees the Gallery lend portraits of iconic individuals to places with which they are closely associated.

“Over the last few years I’ve become more interested in art and Maggi is one of my favourite artists, so I was more than happy to sit for a portrait – the first time I’ve done it,” said Murray. “It was fascinating watching her work, so much time and effort goes into a painting like this, I hope people appreciate that and how talented she is.” 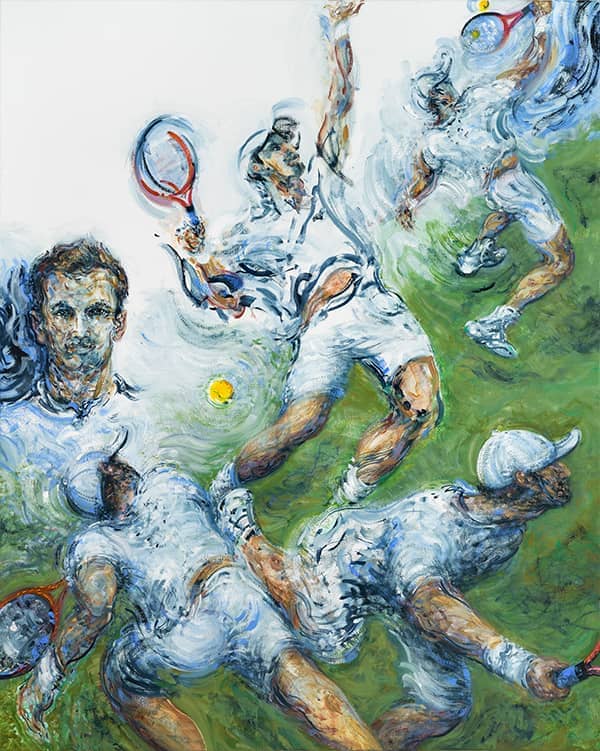 Murray first visited the artist's studio in London and Hambling invited him to sit for a portrait in September 2019, posing for a series drawings wearing his Wimbledon whites.

The 75-year-old Hambling admitted, “I couldn’t have made this portrait without my passion for tennis — both watching the game and in an appallingly amateur way, playing it. My approach to a portrait is never the same. In this instance the composition arrived not only from the drawings but from my imagination which had been on the boil for some time beforehand, in preparation.

“The challenge here was the speed of Andy’s whole body as he plays, one stroke flowing into another. The portrait head in combination with his figure in action encourages the eye to move throughout the territory of the canvas."