Lorenzo Musetti and Simone Tartarini have been working together for more than 10 years.

Andrew Eichenholz
This article contains:
Learn about the close relationship between #NextGenATP Italian Lorenzo Musetti and his coach, Simone Tartarini

After two hours and 44 minutes of play Wednesday evening in Acapulco, Lorenzo Musetti fell to the court on Cancha 3 in celebration. Frances Tiafoe had just missed a backhand volley to give his #NextGenATP Italian opponent a 2-6, 6-3, 7-6(3) win and with it a spot in the quarter-finals of the Abierto Mexicano Telcel presentado por HSBC.

Musetti laid on the court for nearly 15 seconds in disbelief before jogging to embrace Tiafoe. The 19-year-old is into the last eight at an ATP 500 event for the first time.

“It was a really, really tough match,” Musetti said. “At the end, every point was a fight and I had some tears when I finished the match.”

When the teen fell to the court his coach, Simone Tartarini, leapt out of his seat and pumped his right fist twice. After Musetti met Tiafoe, the World No. 120 quickly jogged over to hug his coach.

“Obviously I wanted to share the victory and all the amazing feelings that I have right now and that I had in that moment with my coach,” Musetti said. “I consider him like a second father, so it’s really important for me and he was really proud of me and it’s really incredible tonight.”

Musetti does it again!

Tartarini has worked with Musetti for more than a decade. The teen is more than just a student to him; he is like family.

“Mamma mia!” Tartarini told ATPTour.com shortly after the match. “My heart is dead.”

Tartarini has two sons, and Musetti is like a third. He lives with his pupil in Monaco and shares double rooms with him on the road, including in Acapulco. “It’s normal for us,” Tartarini said.

You May Also Like: Musetti's Newest Highlight: Landing The Esquire Italia Cover!

That is what makes moments like Musetti’s big win Wednesday night even more special. Just four days ago, Musetti lost the first set in his first round of qualifying in Acapulco before overcoming World No. 883 Juan Alejandro Hernandez, a Mexican wild card.

“Before the tournament, in Italy, Lorenzo practised very good. Lorenzo is very, very emotive. The first match in qualifying, in the first set the other player played good and Lorenzo had more tension,” Tartarini said. “Then every game and every match got better.”

Musetti earned his first Top 10 win on Tuesday against Diego Schwartzman. He did not suffer a letdown in the second round, rallying from 3-0 down in the third set to oust Tiafoe.

“Today it was not easy to play, because Tiafoe is very strong and very quick,” Tartarini said. “Lorenzo today brought the best mentality. In the third set, 3-0 down, bravo, Lorenzo. I am very, very happy.”

Musetti’s all-court game has been on full display. The qualifier has used his variety, especially with his crafty one-handed backhand. He has also shown no fear of attacking his opponents and storming the net, where at times he has shown great feel. According to Tartarini, that has always been a part of Musetti’s game.

“He played tennis the same [as a kid], with a lot of extra spin, drop shots. I don’t want to change his feeling, just structure it,” Tartarini said. “I like when he plays different. Drop shots, serve and volley, I like it. It’s not good for my heart, but I like it.”

The teen broke onto the scene by qualifying for last year’s Internazionali BNL d’Italia, where aged 18 he beat Stan Wawrinka and Kei Nishikori in the main draw. What was noticeable then and perhaps moreso this week in Acapulco is that he leaves his heart on the court in every match.

“Every year [there has been] more pressure and more pressure. In [2018], he played the final at the junior US Open. At 16, [in 2019], he won the junior Australian Open. Lorenzo always played with pressure,” Tartarini said. “Lorenzo inside is very strong. He’s very, very emotive. During the US Open, Australian Open, two times I called the doctor because it was impossible for him to breathe because it was too much stress. Lorenzo is very emotional. Inside the court and outside the court, it’s the same.” 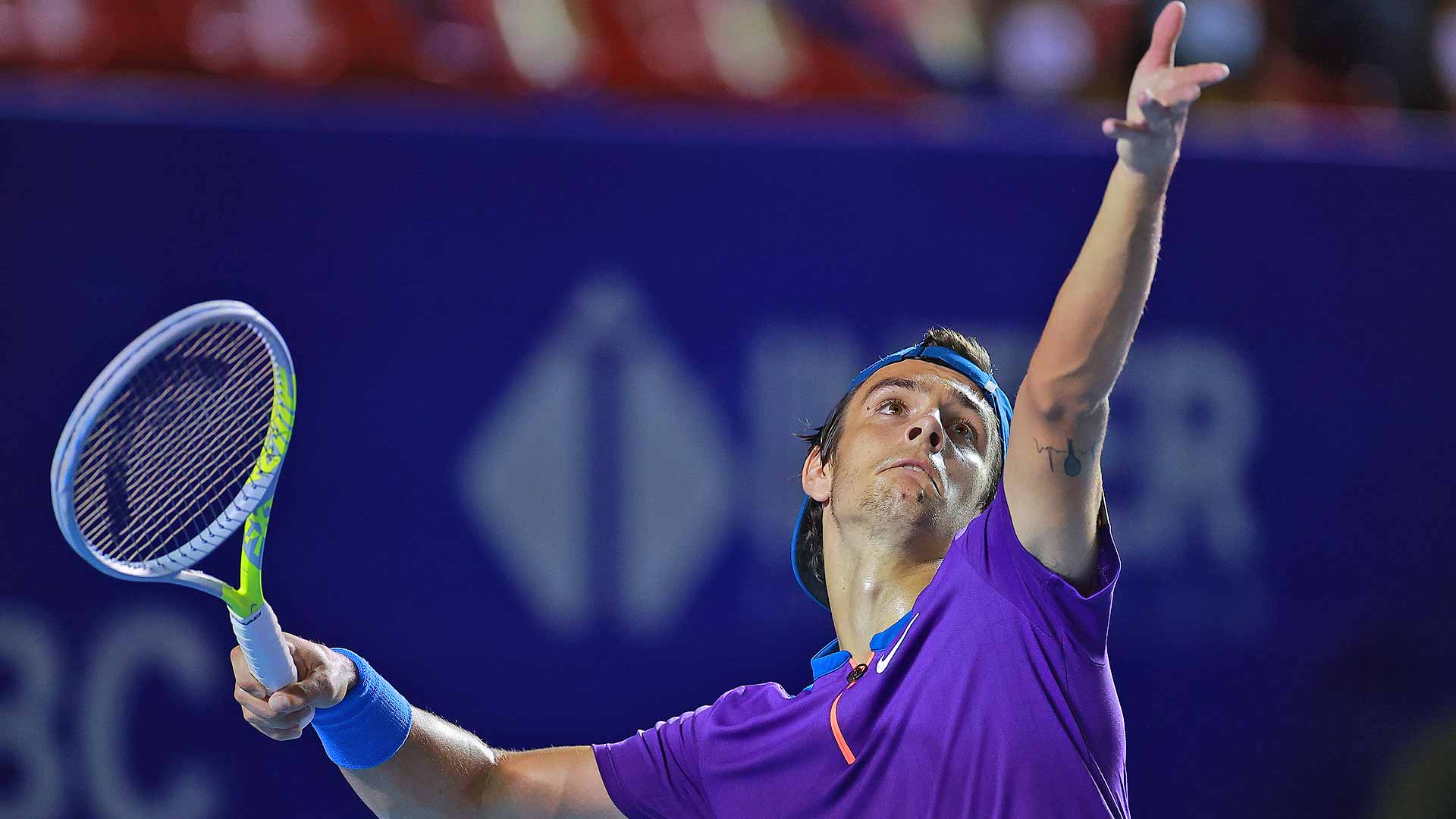 Photo Credit: Hector Vivas/Getty Images
When Musetti fell to the court after beating Schwartzman and again after defeating Tiafoe, it was an emotional response. Tennis means the world to him, and the teen greatly values his achievements. That’s why a month-and-a-half ago, he got a tattoo of a heartbeat with a tennis racquet on his left tricep.

“You can imagine how important tennis is in my life,” Musetti said. “I decided to tattoo this and I think it’s really cool and I really like it.”

Musetti will try to keep his run going on Thursday against 2017 Nitto ATP Finals champion Grigor Dimitrov. Regardless of the result, it will be a tournament the teen will remember for years to come.

“I fell asleep at 1 a.m. [after beating Schwartzman] because it was really tough to fall asleep and tonight it’s going to be the same for sure,” Musetti said. “I’m exhausted, but I will try to recover my best and physically, I feel good. I have no injuries, no problems. I will be okay for tomorrow and let’s see what happens.”