ATPTour.com looks back on Rafael Nadal's 11 title runs in Monte-Carlo

Since the inception of the series in 1990, only six men have won 11 or more ATP Masters 1000 titles. One of those men, Rafael Nadal, has remarkably achieved that feat at a single event.

The Spaniard has won the Rolex Monte-Carlo Masters 11 times, matching former World No. 1 Pete Sampras’ haul across all Masters 1000 tournaments with his dominant reign in the Principality.

Since his tournament debut as a 16-year-old in 2003, when he defeated reigning Roland Garros champion Albert Costa to reach the third round, Nadal has consistently produced his best tennis at the Monte-Carlo Country Club. The Mallorcan, who has won 71 of his 76 matches at the event, won an Open-Era record eight successive titles from 2005 to 2012 and a further three straight crowns from 2016 to 2018.

The Rolex Monte-Carlo Masters was set for this week, but due to the global outbreak of COVID-19, this year’s tournament will not proceed as scheduled.

ATPTour.com looks back at each of Nadal's 11 title runs in Monte-Carlo.

2005: The Reign Begins
Two years after stunning Costa on his Monte-Carlo debut, Nadal captured his maiden ATP Masters 1000 trophy in the Principality. After recovering from down a set in the semi-finals against Richard Gasquet, who had defeated Roger Federer, Nadal met defending champion Guillermo Coria in the championship match.

Coria ended Nadal’s maiden appearance in Monte-Carlo with a straight-sets victory in 2003, but Nadal had improved his game significantly since that meeting. The Spaniard battled to a 6-3, 6-1, 0-6, 7-5 win after three hours and nine minutes to claim what was the biggest title of his career.

2006: A Classic Final
After a breakthrough 2005 season, Nadal returned to Monte-Carlo the following year as World No. 2 and reigning Roland Garros champion. The Spaniard moved past Coria and Gaston Gaudio to book a final clash against World No. 1 Roger Federer, whom he had beaten in three of their past four ATP Head2Head clashes. Nadal successfully defended an ATP Tour title for the first time in a three-hour, 50-minute classic, triumphing 6-2, 6-7(2), 6-3, 7-6(5).

2007: Hattrick Complete
After losing to Federer in the 2006 Wimbledon final and the semi-finals of the Nitto ATP Finals, Nadal earned the opportunity to once again face the Swiss on his preferred surface in the 2007 Monte-Carlo championship match. Nadal, who did not drop a set en route to the final, continued his dominant display against Federer with a break of serve in each set to lift the trophy for the third straight year. 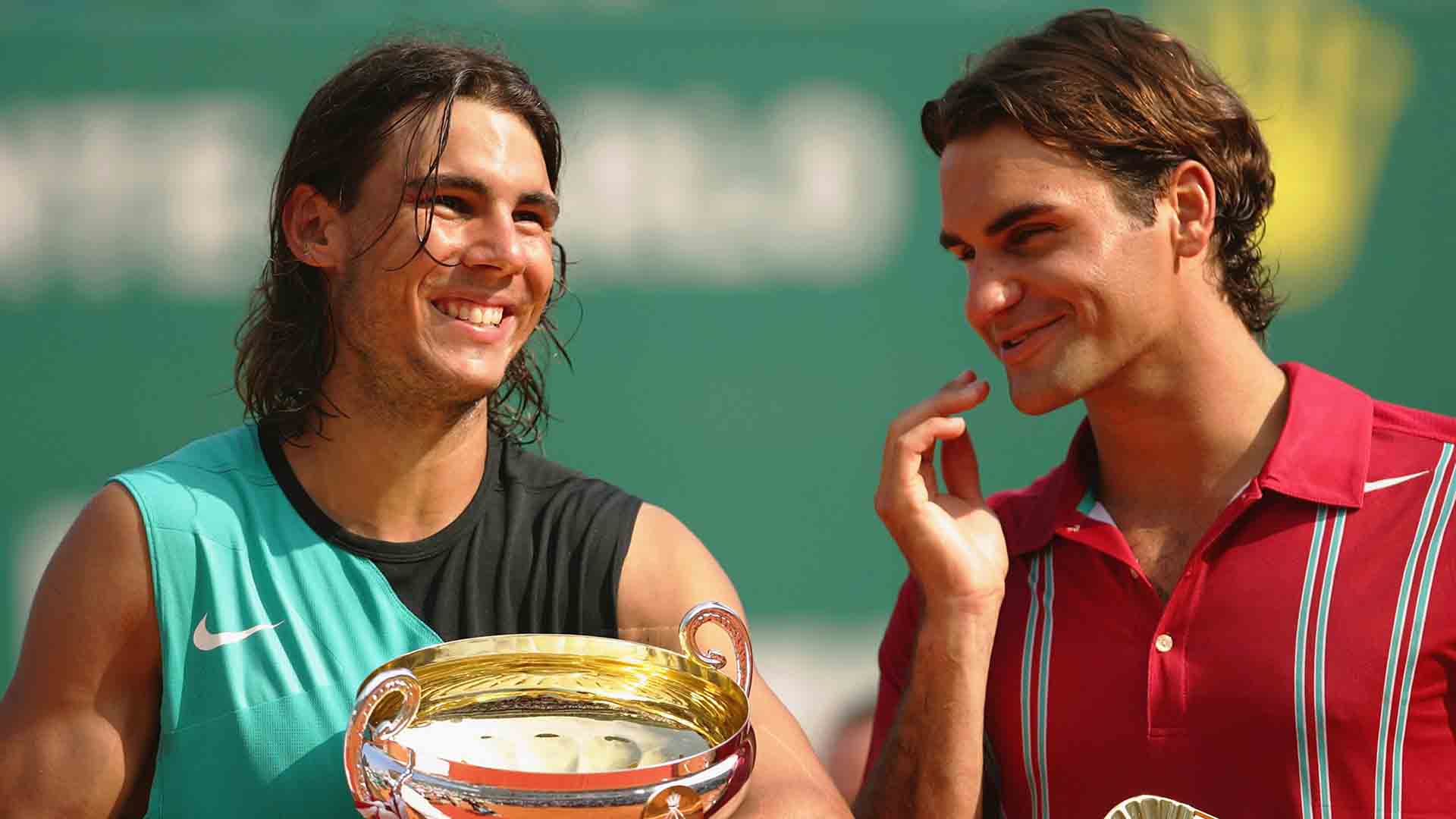 2008: A Trilogy Completed
Following straight-sets wins against Top 5 players David Ferrer and Nikolay Davydenko, Nadal met Federer at the Monte-Carlo Country Club for the third straight year with the trophy on the line.

Nadal snatched the opening set with a late break, but Federer threatened to force a decider after racing out to a 4-0 lead in the second set. Three-time defending champion Nadal battled back though, taking the title with another late service break to complete an impressive trio of final victories against his rival in the Principality. Nadal and Federer have not met in Monte-Carlo since that day.

Djokovic had already beaten Nadal at each of the Masters 1000 events in North America, but the Spaniard had won each of their previous six meetings on clay, losing one total set. Djokovic doubled that figure by forcing a deciding set in Monte-Carlo, but Nadal raised his game to clinch his fifth title in the Principality. The match marked the beginning of a new chapter in their rivalry, with the pair meeting on three further occasions at the tournament.

2010: Ruthless Rafa
When Nadal ends his career, he may look back at the 2010 Rolex Monte-Carlo Masters as the most dominant tournament of his career. The Spaniard entered the event on an 11-month trophy drought, dating back to his 2009 Internazionali BNL d’Italia victory. But he only dropped 14 games across five matches to capture his sixth successive Monte-Carlo crown. Nadal beat Thiemo de Bakker, Michael Berrer and the Spanish trio of Juan Carlos Ferrero, David Ferrer and Fernando Verdasco to earn the trophy.

2011: The Best Of Spain
For the second straight year, the Monte-Carlo final was contested by the top two Spaniards in the FedEx ATP Rankings. Nadal, who survived a three-set semi-final against Andy Murray, met in-form World No. 6 Ferrer for the title.

Ferrer had dropped just 17 games to reach his second Masters 1000 final, but Nadal battled past the man who ended his bid for a non-calendar Grand Slam three months earlier at the Australian Open with a 6-4, 7-5 victory. 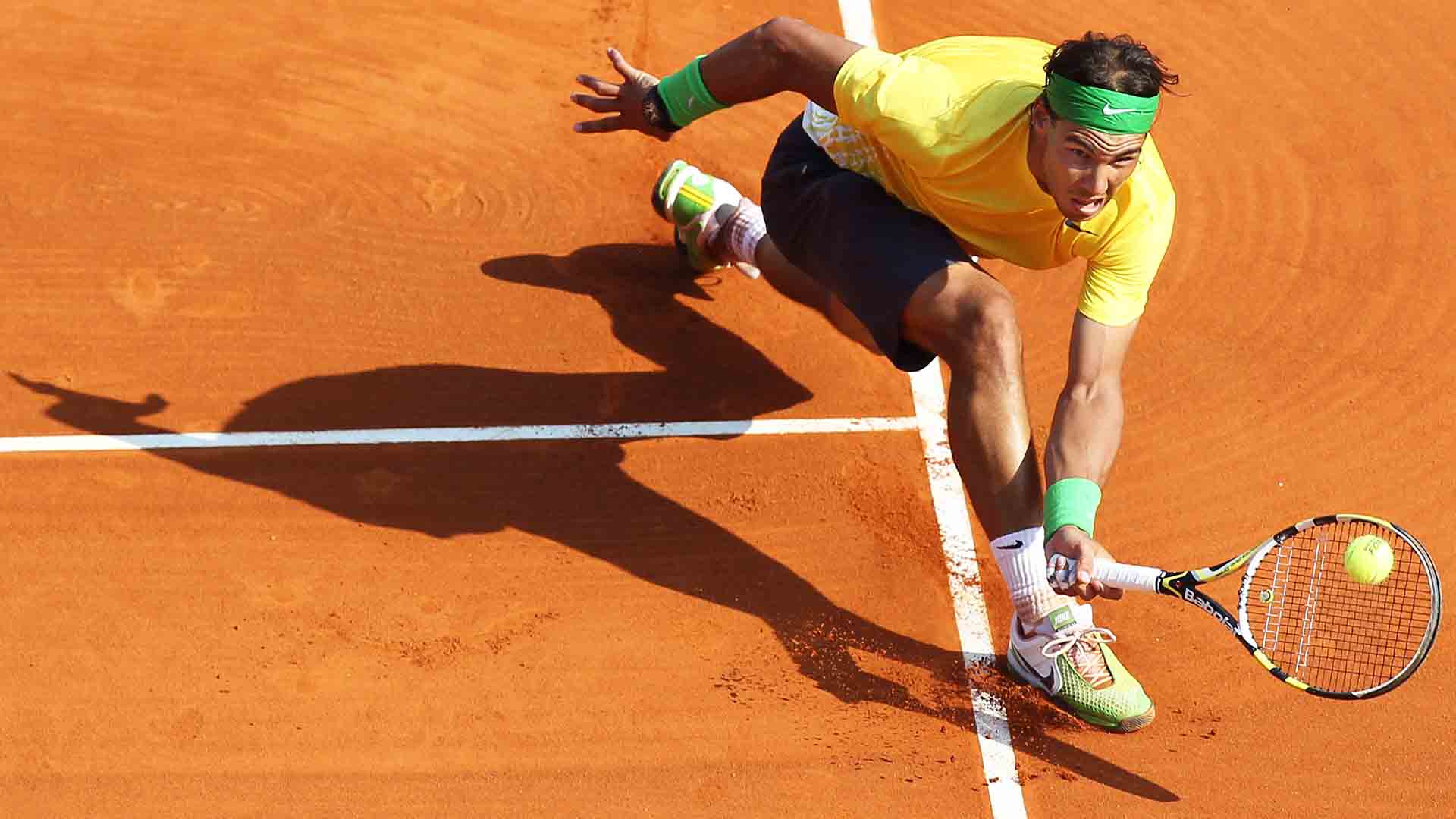 2012: Ending The Streak
After straight-sets wins against Stan Wawrinka and Gilles Simon, Nadal entered the 2012 Monte-Carlo final seeking to end a seven-match losing streak against World No. 1 Djokovic. Meeting for the first time since their epic five-hour, 53-minute Australian Open final that January, Nadal charged past Djokovic 6-3, 6-1 in 79 minutes to lift an Open Era record eighth straight title at a single ATP Tour event.

2016: Back In The Winners’ Circle
Four years after picking up his eighth title in Monte-Carlo, Nadal returned to the opening clay-court Masters 1000 event of the year aiming to lift his first title in eight months. The Spaniard moved past 22-year-old Dominic Thiem and Stan Wawrinka before rallying from a set down to overcome Andy Murray in the semi-finals.

With support from French fans in the stands, his final opponent, Gael Monfils, showcased his incredible shot-making ability and defended well to force Nadal into a deciding set after more than two hours. But Nadal continued to trust his baseline game and wore his opponent down to clinch his ninth Monte-Carlo trophy.

2017: History Maker
After a first-round scare against Kyle Edmund, Nadal advanced to his 11th Monte-Carlo final with victories against Alexander Zverev, Diego Schwartzman and David Goffin. For the third time, a fellow Spaniard awaited Nadal in the final. Albert Ramos-Vinolas secured three-set victories against World No. 1 Andy Murray, Marin Cilic and Lucas Pouille to reach his first Masters 1000 championship match.

Like Verdasco and Ferrer before him, Ramos-Vinolas had no answer to the Mallorcan’s game on Court Rainier III. Nadal served with confidence throughout the 76-minute encounter to win 6-1, 6-3 and move clear of Guillermo Vilas with a record-breaking 50th tour-level clay court title.

2018: Dominant Display
In 2018, no player won more than five games against Nadal in Monte-Carlo. The Spaniard breezed through the draw, claiming wins against Aljaz Bedene, Karen Khachanov, Thiem and Grigor Dimitrov to reach his 12th final at the Monte-Carlo Country Club.

In the championship match, Nadal broke Kei Nishikori on four occasions to become the first man in the Open Era to win a single event 11 times. It was the fifth time Nadal won the tournament without dropping a set (2008-’10, ’12), which extended his career-best set-winning streak on clay to 36. Nadal’s sets won streak reached 50, before Thiem beat the Spaniard in the 2018 Mutua Madrid Open quarter-finals.