Rafael Nadal picks up his fourth US Open title over Daniil Medvedev.

A Look Back At Nadal's US Open Title Runs

Rafael Nadal clinched his fourth US Open title on Sunday by defeating Russian Daniil Medvedev in an instant classic. Their five-set battle lasted four hours and 50 minutes, making it the third-longest final in tournament history. .

Nadal is on a 10-match winning streak, having also prevailed over Medvedev in last month’s Coupe Rogers final.

The Spaniard has history on his side as he looks to finish the year at No. 1 in the ATP Rankings. He was year-end No. 1 in all three previous years that he won the US Open. Nadal currently leads Djokovic by 1,960 points in the ATP Race to London, adding another 800 points by clinching the title today.

But how does his run this fortnight compare to his other US Open titles? ATPTour.com takes a look at each time that Nadal has stood in the winner’s circle at the final Grand Slam of the year.

The US Open had remained the missing piece of Rafael Nadal’s career Grand Slam puzzle. Although he arrived in New York as one of the clear favourites for the title after prevailing in Roland Garros and Wimbledon, he hadn’t won a hard-court title since the 2018 BNP Paribas Open. Nadal also endured two losses leading in. He fell in straight-sets defeat to Andy Murray in the Rogers Cup semi-finals and had a surprising quarter-final loss to Marcos Baghdatis at the Western & Southern Open.

But Nadal was in full flight once the tournament started. He powered into the final without dropping a set, including convincing wins over Fernando Verdasco and Mikhail Youzhny, to book a championship showdown with Novak Djokovic. The Serbian had prevailed in an epic five-set semi-final with Roger Federer.

Nadal was the underdog heading into the match with Djokovic. They had never played a Grand Slam match on hard courts before, but Djokovic led 7-3 on hard courts in their FedEx ATP Head2Head rivalry and won their past three matches on the surfaces.

Rain pushed the start of their Sunday final to Monday and showers forced them off the court at 4-4 in the second set. Although Djokovic quickly levelled the match when play resumed, Nadal grabbed an early break in the third set and never looked back. The Spaniard fell to the ground and sobbed in his hands after a forehand sent wide from Djokovic made him the seventh man to win all four Grand Slams.

”This is more than I ever dreamed,” Nadal said. “It is unbelievable to have this US Open trophy.” 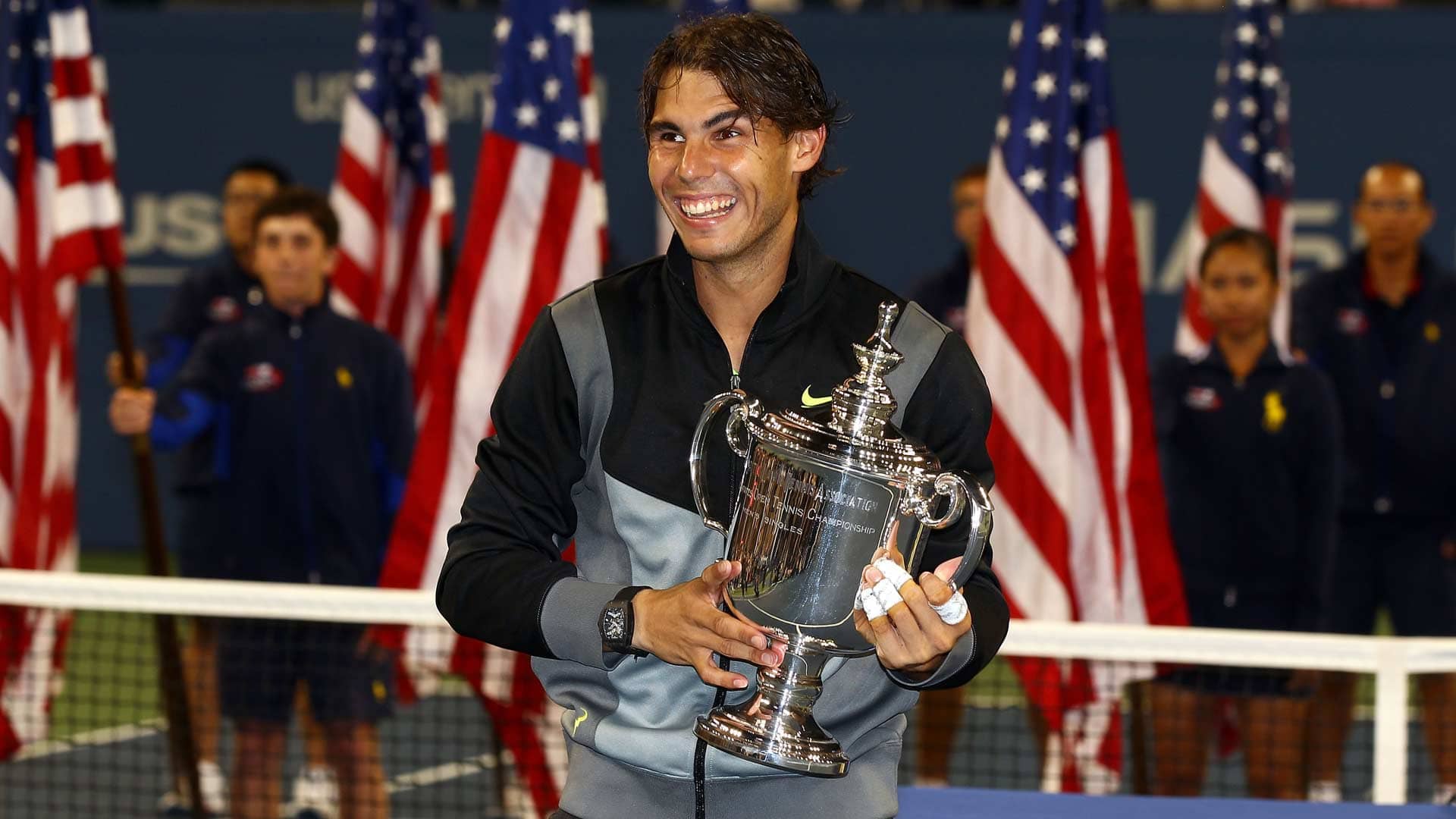 Nadal proved to be the dominant force throughout the North American hard-court swing. He defeated Djokovic en route to prevailing in Montreal (d. Raonic) and followed up with a win over Federer on his path to the title in Cincinnati (d. Isner).

The Spaniard advanced to the US Open final with minimal fuss, only dropping one set in his fourth-round match against Philipp Kohlschreiber and powering through Richard Gasquet to reach the championship match. In nearly identical fashion to 2010, he faced Djokovic in the final after the Serbian prevailed in a grueling five-set encounter with Stan Wawrinka.

Nadal and Djokovic’s showdown started in sunlight and finished at night, featuring incredible rallies that brought the crowd to their feet on numerous occasions. There was even an epic 54-ball exchange that Djokovic came out on top in for a 4-2 lead in the second set.

But while Djokovic won that battle, Nadal won the war. Once the Spaniard sunk his teeth into the third set, he ran away with the remainder of the match. Nadal improved to 22-0 on hard courts and 60-3 overall in 2013, becoming the first player to win at least one Grand Slam title in nine consecutive seasons. He also became the third player to prevail in Canada, Cincinnati and the US Open in the same season, joining Patrick Rafter (1998) and Andy Roddick (2003).

"This is probably the most emotional one in my career," Nadal said. "I know I had to be almost perfect to win. Nobody brings my game to the limit like Novak." 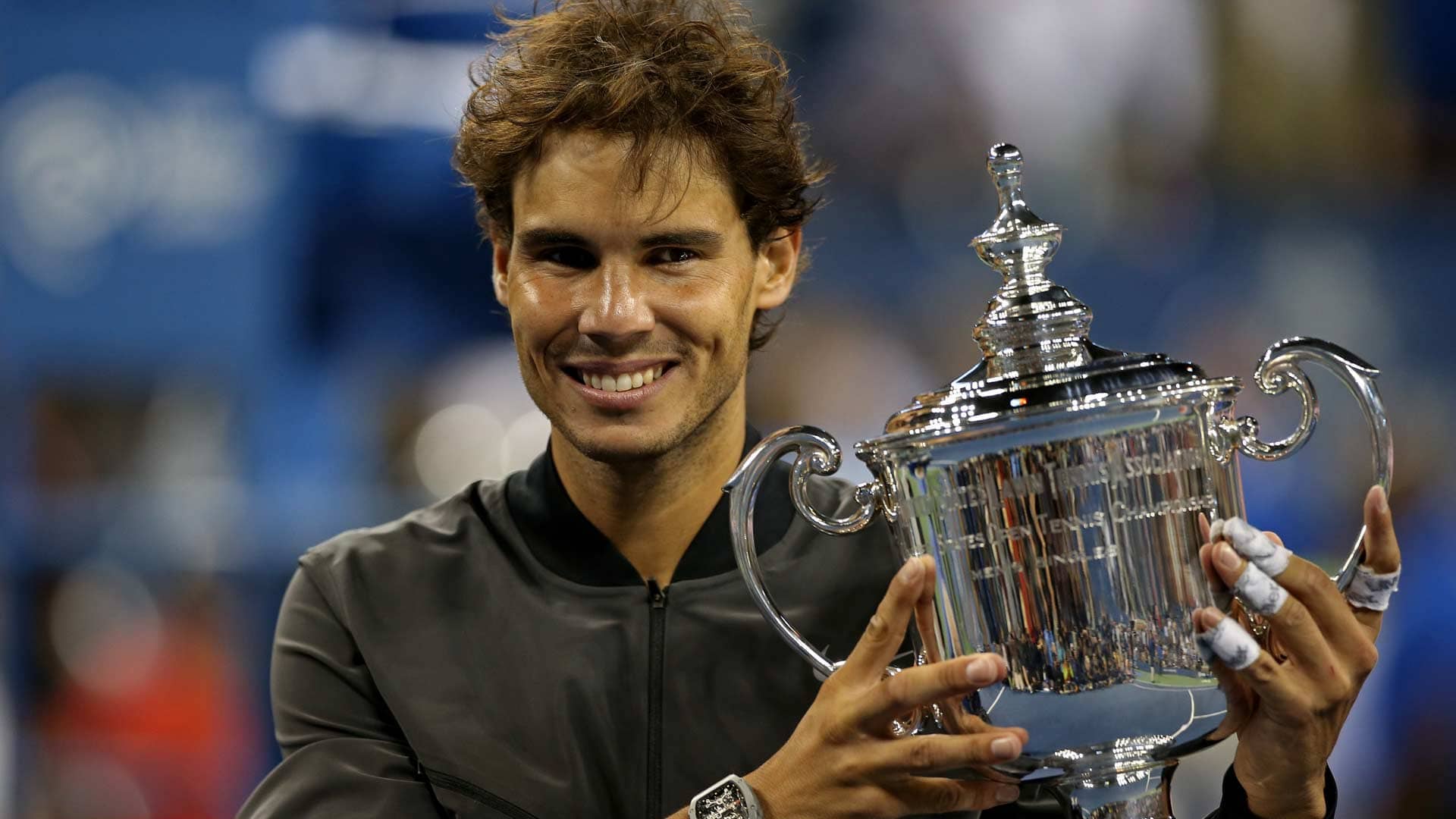 Nadal arrived to New York as the top seed once again, but there were questions about his ability to perform on hard courts. He hadn’t won a hard-court title since 2014 Doha and had lost his past eight hard-court finals. Nadal also endured surprising defeats in the 2017 North American hard-court swing to Denis Shapovalov (Montreal) and Nick Kyrgios (Cincinnati).

The Spaniard also got off to a slow start in several of his matches that fortnight, dropping the opening set in three of his first six rounds. But after losing the first set in his semi-final to Juan Martin del Potro, he found a new gear and dropped just five games the rest of the way.

Nadal was a heavy favourite in the final against first-time Grand Slam finalist Kevin Anderson of South Africa, owning a 4-0 record at the time in their FedEx ATP Head2Head rivalry. The Spaniard never let Anderson into the match, losing only 15 points on serve and never facing a break point. He was also perfect (16/16) at the net, knocking off a backhand volley winner to secure his 16th Grand Slam title.

“I believed in the work, in the daily work all the time,” “Nadal said. I still believe in these things to improve, and I wake up every morning with the passion to go on court and to try to improve things. Probably that's why I still have chances to compete in this sport and to do it well.” 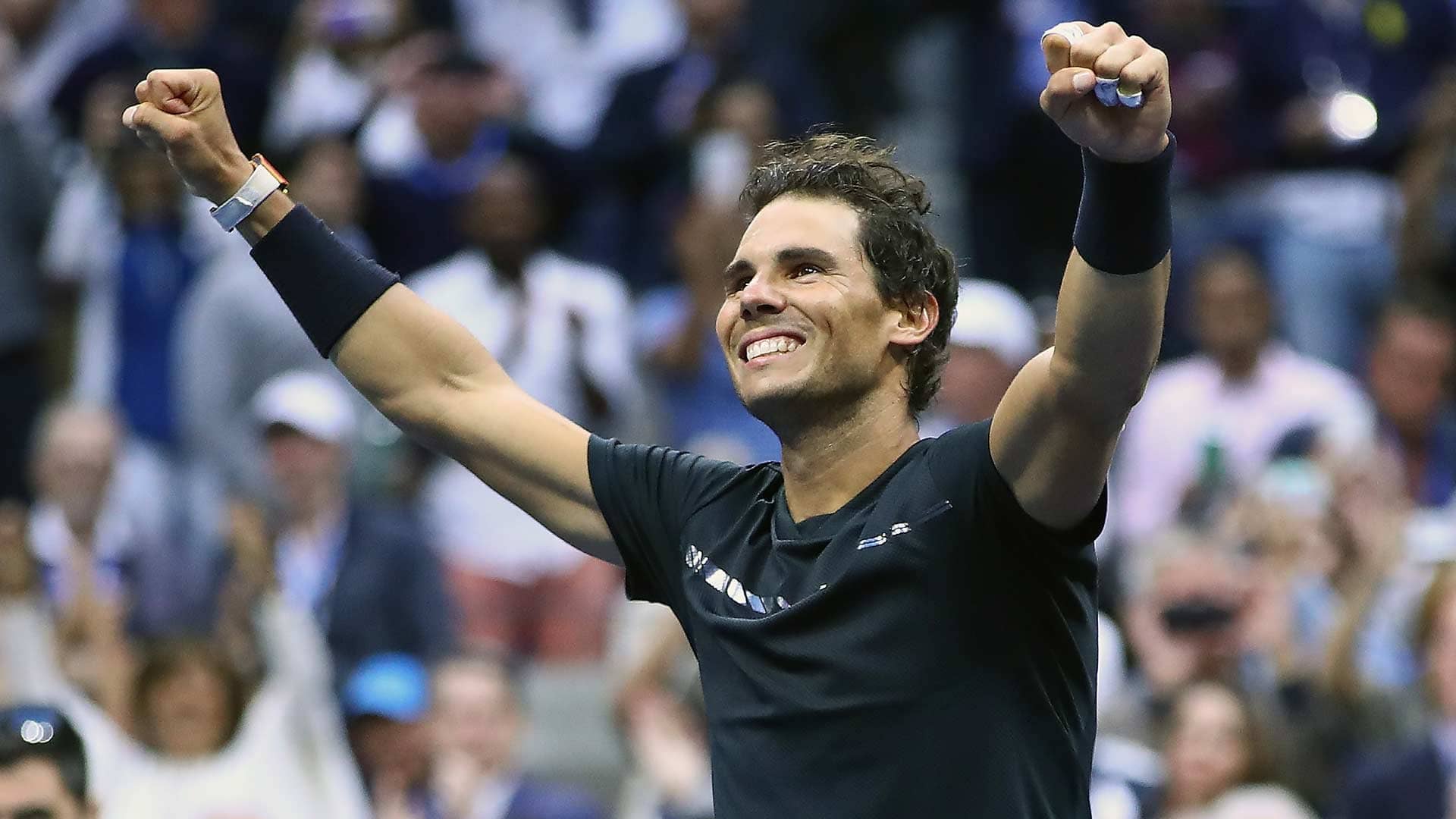 Nadal was in top form heading to the final Grand Slam of the year, marching to the title in Montreal and losing just three games in the final against Daniil Medvedev. The 33-year-old looked sharp from the first ball in New York, dropping just one set (v. Cilic) en route to the championship match. His powerful baseline game was especially potent in his quarter-final and semi-final victories over Argentine Diego Schwartzman and Italian Matteo Berrettini. Nadal didn't face a break point against Berrettini and he fired 31 winners to just 18 unforced errors.

Fittingly, Medvedev would be his opponent for the title in New York. The Russian was the other dominant force in the North American hard-court swing, clinching his first Masters 1000 title in Cincinnati (d. Goffin) and recording runner-up finishes in Cincinnati and Washington, D.C. (l. to Kyrgios). But when it came to Grand Slam final experience, Nadal was in another category. The Spaniard was competing in his 27th major final, while it was the first for the 23-year-old.

It appeared that Nadal would secure a comfortable victory after holding two break points at 4-4 in the third set, but Medvedev refused to budge. He continued to track down shots from Nadal that would be winners against almost anyone else on Tour, forcing the Spaniard to keep hitting one extra ball. The Russian brought the crowd to their feet as he forced a decider that seemed inconceivable an hour earlier.

Nadal scored two consecutive breaks to lead 5-2 in the final set, but Medvedev had one final Houdini act up his sleeve. He broke Nadal and saved two championship points on his serve to claw back to 4-5, then held a break point to level the match. The Spaniard dug his heels in after nearly five hours of play, falling to the ground in a mixture of delight and exhaustion as a forehand sent long by Medvedev wrapped up the match. Nadal earned his 19th Grand Slam title, putting him one shy of all-time leader Federer (20).

"This victory is so important for me," said Nadal during the trophy presentation. "Especially as the match became more and more difficult, I was able to hold the nerves. They were so high. It was a crazy match and I'm just very emotional." 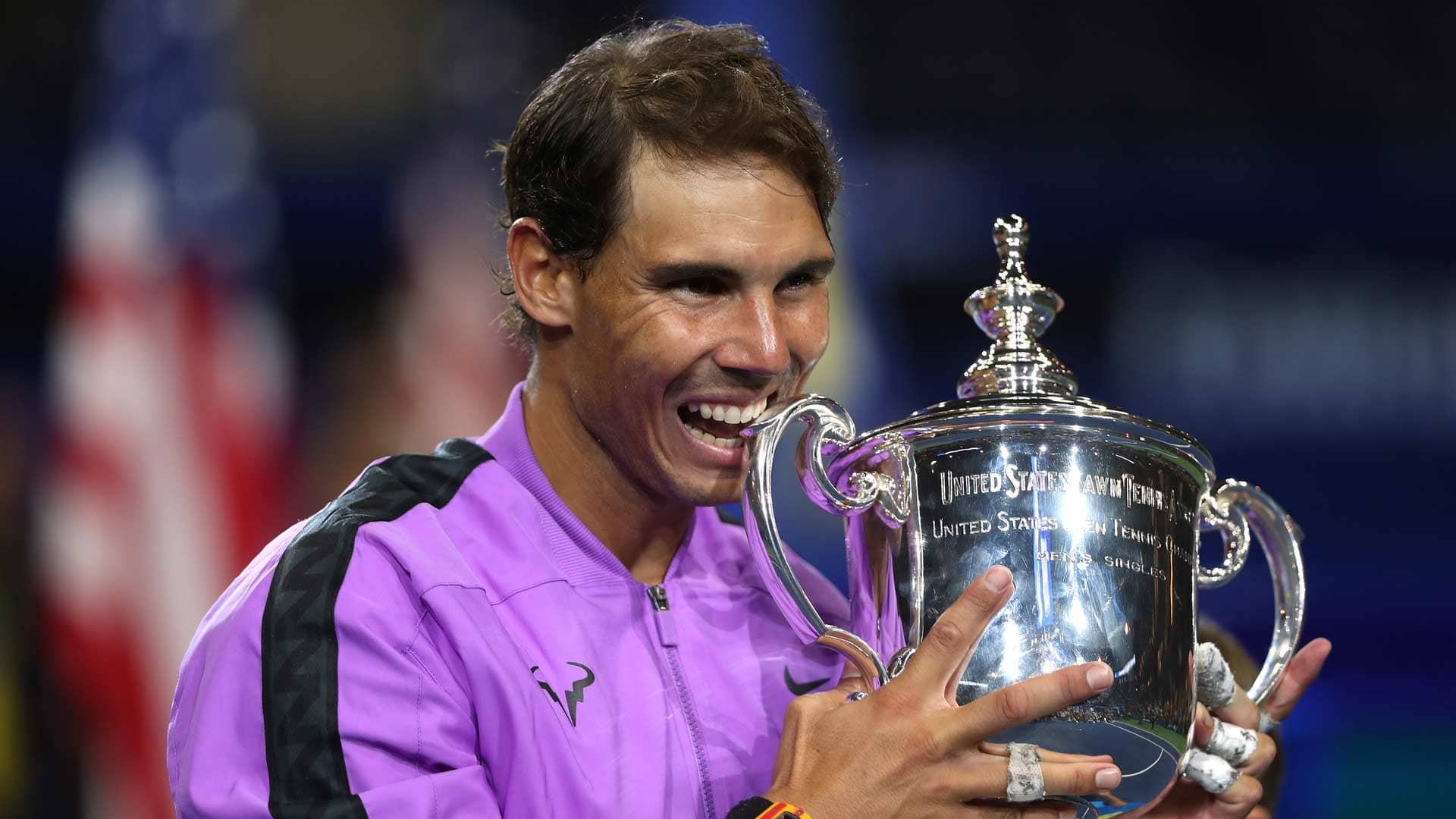