Rafael Nadal is hoping to end the 2022 Australian Open the way he started it—as the only man in the 128-player men’s singles draw with a Melbourne title to his name.

There is no shortage of challengers this fortnight, including fourth seed Alexander Zverev and seventh Matteo Berrettini in his half of the draw. But the Spaniard’s chief concern at this stage of the tournament is his health.

As he pointed out following his 6-1, 6-4, 6-2 opening-round win over Marcos Giron, Nadal played just 13 tournaments in the past two seasons. Prior to winning the Melbourne Summer Set title earlier this month, Nadal had not competed since early August, missing the US Open with a left foot injury.

“Every [injury comeback] is different,” he said after his first-round win. “Of course, when you are getting a little bit older, all the comebacks are tougher. This has been especially difficult because it’s not only a comeback from injury, it’s a comeback trying to be back on the Tour after almost two years not playing many events with the virus.

“If we add that I was not able to practise very often, too, it’s a really tough one.” 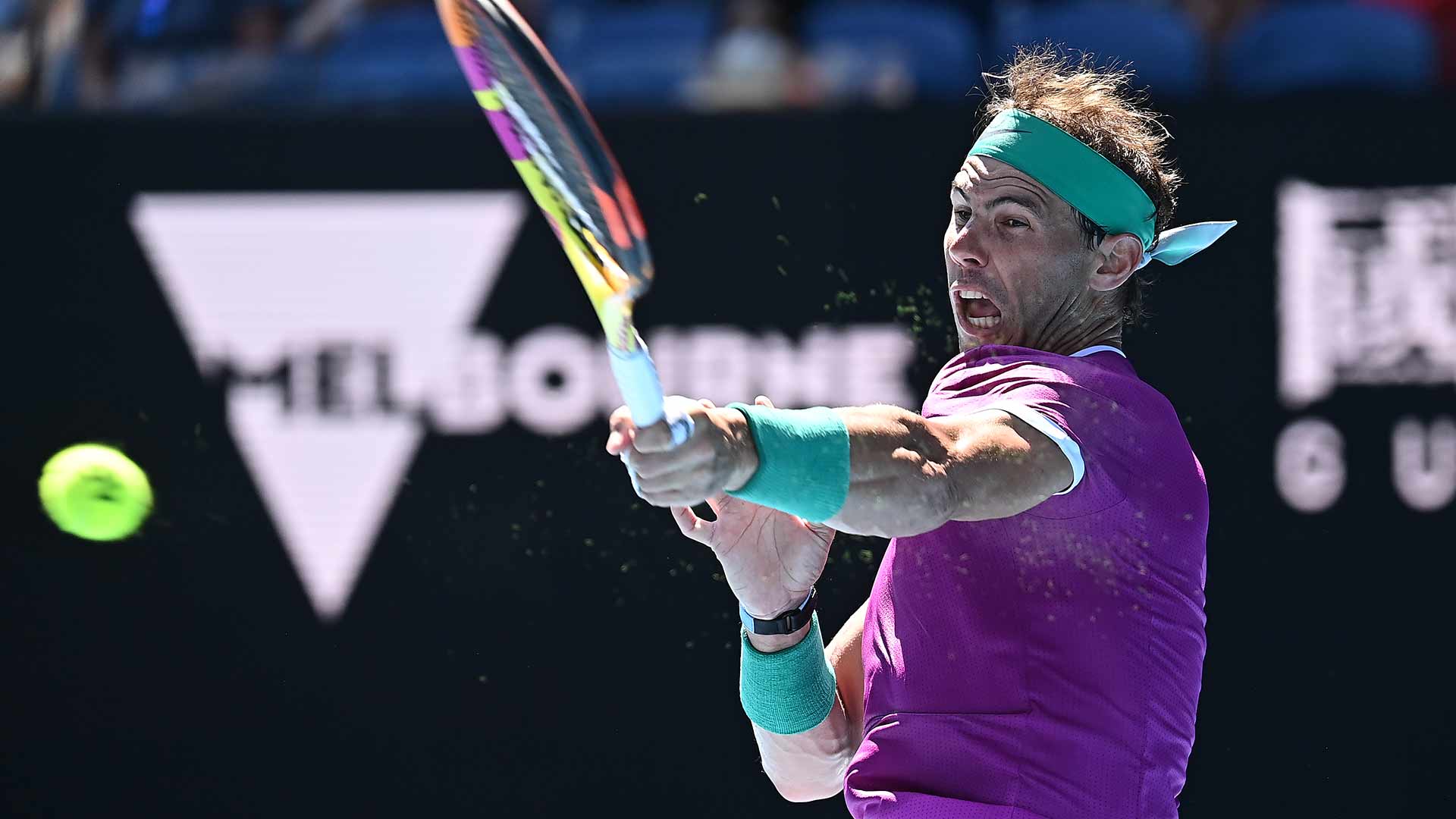 Photo Credit: Peter Staples/ATP Tour
Nadal added that his knees “have never been better” following the initial pandemic-induced lockdown, but that his foot “has never been worse [than] over the past year and a half.”

Nadal’s 4-0 record in 2022 is a strong start, though he is yet to face a Top 60 player in the new year. That won’t change in the second round, when he takes on World No. 126 Yannick Hanfmann of Germany. The 30-year-old qualifier stormed past home favourite Thanasi Kokkinakis, 6-2, 6-3, 6-2, in the first round, and will now seek to be the first man to take a set off Nadal this season.

While Nadal enjoyed a smooth start at Melbourne Park, Zverev was less pleased with his performance in a 7-6(3), 6-1, 7-6(1) win over fellow German Daniel Altmaier. But perhaps the Olympic gold medallist is simply perfecting the art of easing into a Grand Slam, winning early-round matches without his best stuff, as champions often do.

“Not much went to plan today to be honest, except that I won,” he said following the victory. “But that is how it is sometimes. It is the first round of a very long tournament and you are not always going to play your best tennis. It was a good match for me to get into the tournament and hopefully the next round will be better.”

The German has expertly navigated the first week of majors over the past three seasons, reaching the fourth round or better in 10 of 11 tries, including a semi-final and quarter-final showing the past two years in Melbourne.

Brisbane-born John Millman will be across the net from Zverev on Wednesday. A US Open quarter-finalist in 2018 with a career-high ATP Ranking of No. 33, the Aussie has never progressed beyond the third round at his home Slam.

Nadal and Zverev could meet in the quarter-finals, with 10th seed Hubert Hurkacz (vs. Adrian Mannarino in the second round), 14th seed Denis Shapovalov (vs. Soonwoo Kwon), 18th seed Aslan Karatsev (vs. Mackenzie McDonald) and 23rd seed Reilly Opelka (vs. Dominik Koepfer) among the other contenders in their section. 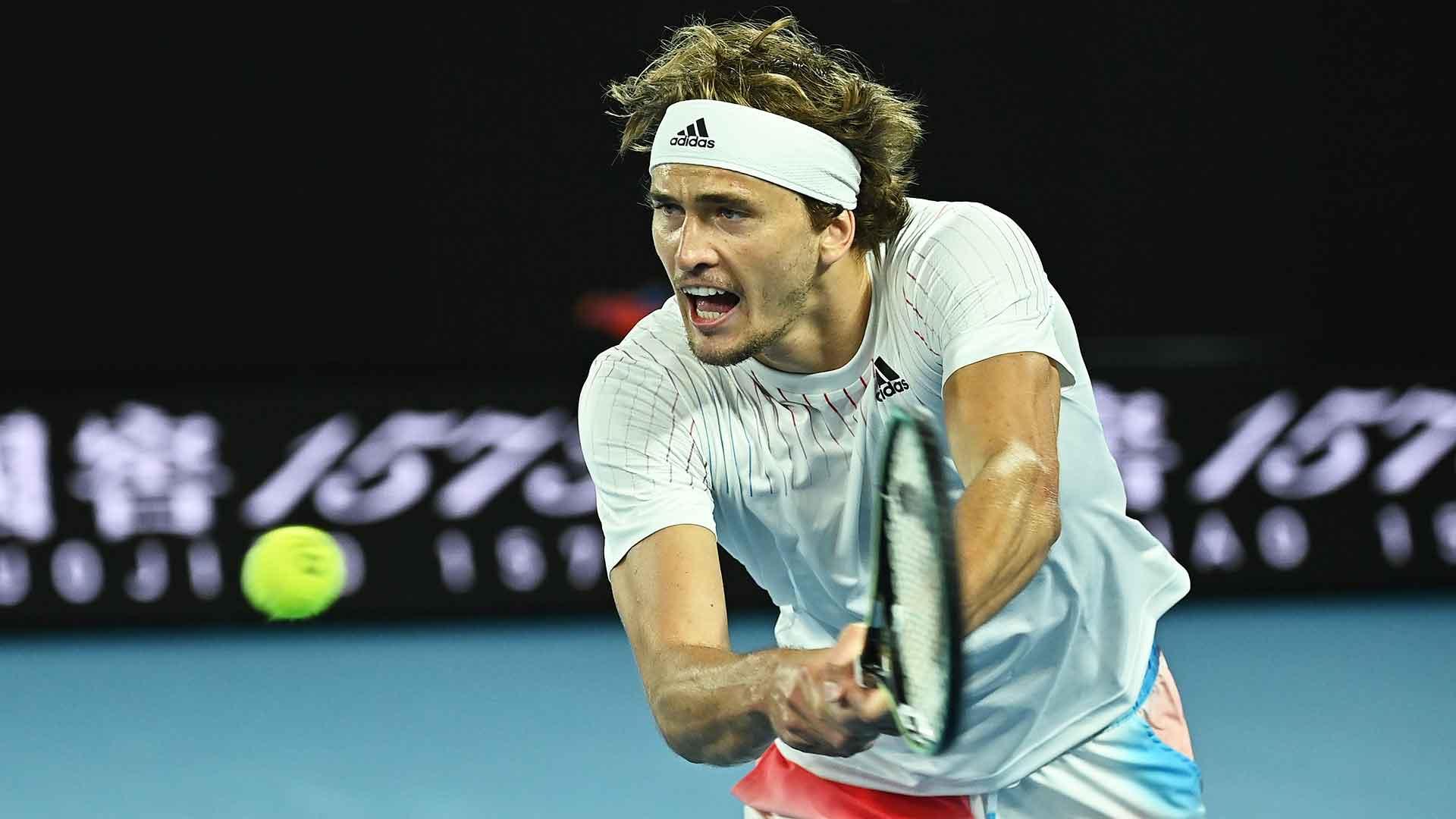 Photo Credit: Peter Staples/ATP Tour
The first quarter of the draw—in which the top line was vacated by the withdrawal of Novak Djokovic—is led by the seventh-seeded Berrettini, who edged #NextGenATP American Brandon Nakashima 4-6, 6-2, 7-6(5), 6-3 in the first round. The match was even tighter than the scoreline suggests, with the Italian saving two set points in the third.

The 2021 Wimbledon finalist is one win from a potential third-round showdown with Carlos Alcaraz, who was fit and firing in a sleeveless red shirt during a first-round cruise against qualifier Alejandro Tabilo, 6-2, 6-2, 6-3. To set up that marquee meeting, Berrettini must get past another American in Stefan Kozlov, while Alcaraz faces Serbian Dusan Lajovic in the second round.

Opening up that top quarter further was Sebastian Korda’s dominant dismissal of 12th seed Cameron Norrie. In a 6-3, 6-0, 6-4 route, the 21-year-old American marked his Australian Open main-draw debut in style—complete with a scissor kick celebration in honor of his father and coach, 1998 Australian Open champion Petr Korda. Now facing World No. 100 Corentin Moutet, the No. 43-ranked Korda has an excellent opportunity to capitalise on the upset.

The Korda family has fond memories of Australia, starting with Petr’s 1998 triumph. More recently, Korda won the Australian Open boys’ singles title in 2018, while both of his sisters, Jessica and Nelly, have won LPGA events there.

“It’s always special. A lot of history in the family here in Australia,” Korda said. “The fans are incredible. The tournament’s unbelievable. Just really comfortable here, and they always make me feel like home here.”

After achieving his goal of reaching the Top 50 last season, Korda is now setting his sights on the Top 25 in 2022. A few more wins in Melbourne, where he is not defending any ATP Ranking points, would go a long way towards hitting that target.

Pablo Carreno Busta, the 19th seed who plays Tallon Griekspoor in the second round, is a potential third-round opponent for Korda. Other seeded players in the section include 16th seed Cristian Garin (vs. Pedro Martinez in the second round), 17th seed Gael Monfils (vs. Alexander Bublik) and 25th seed Lorenzo Sonego (vs. Oscar Otte).

As the second round begins, 16 men’s singles matches are on Wednesday’s schedule at Melbourne Park.