Carlos Alcaraz earned his first win over Rafael Nadal to set up a Madrid semi-final showdown with Novak Djokovic, while Stefanos Tsitsipas and Alexander Zverev advanced in the draw's bottom half. Watch live &amp; on demand at <strong><a rel="noopener noreferrer" href="https://www.tennistv.com/" target="_blank">TennisTV.com</a></strong>.

What a difference a year makes for Carlos Alcaraz.

A year on from winning just three games in a second-round defeat to Rafael Nadal at the 2021 Mutua Madrid Open, the 19-year-old sensation exacted revenge on his countryman at the ATP Masters 1000 event on Friday with a 6-2, 1-6, 6-3 victory in a topsy-turvy clash in the Spanish capital.

Alcaraz withstood a trademark Nadal fightback and a nasty second-set fall on the Madrid clay to prevail in an absorbing two-hour, 29-minute encounter. The win elevates the Spaniard to No. 6 in the Pepperstone ATP Live Rankings and he now faces a semi-final clash with another ATP Tour legend, World No. 1 Novak Djokovic, in a maiden ATP Head2Head meeting between the two.

Breaking into the Top 10 of the Pepperstone ATP Rankings and clinching a maiden Masters 1000 title in Miami in March have been the headlining achievements of Alcaraz's stellar 2022 season so far, and a first victory over Nadal represents another milestone for the 2021 Intesa Sanpaolo Next Gen ATP Finals champion. He displayed maturity and youthful exuberance in equal measure to overcome Nadal, becoming the first teenager to defeat the 35-year-old on clay.

Alcaraz was untouchable in the opening set, striking 19 winners as Nadal struggled to match the quality and intensity of his opponent’s game. Although Nadal immediately broke back after dropping serve in the first game of the match, a combination of huge baseline hitting and clever drop shots earned Alcaraz two further breaks as he charged to the first set in Manolo Santana Stadium.

Despite his opponent’s strong start, there was no panic from 36-time Masters 1000 champion Nadal, whose return game began to fire as he sensed a drop in Alcaraz’s level. Alcaraz recovered 0/40 to hold for 1-1 in the second set before a slip in the next game left him requiring treatment for an ankle injury. Nadal’s improved hitting won him 20 of the final 22 points of the set to level the match as Alcaraz struggled to regain his early momentum.

Nadal appeared to have the upper hand as he chased a 12th semi-final appearance in Madrid, but his younger opponent showcased levels of resilience that the 21-time Grand Slam champion would be proud of. A reenergised Alcaraz struck the ball with authority as he clinched the only break of the deciding set in the fourth game to reach the semi-finals in Madrid for the first time.

Alcaraz’s early dominance was reflected in his outstanding Conversion and Steal numbers for the first set. When the 19-year-old had control of rallies he regularly came out on top, winning 74 per cent of points after taking up offensive positions. Even as Nadal tried to hit back there was no let-up from Alcaraz, who also won 61 per cent of points from defensive positions in the set. (Learn more about Conversion and Steal scores). 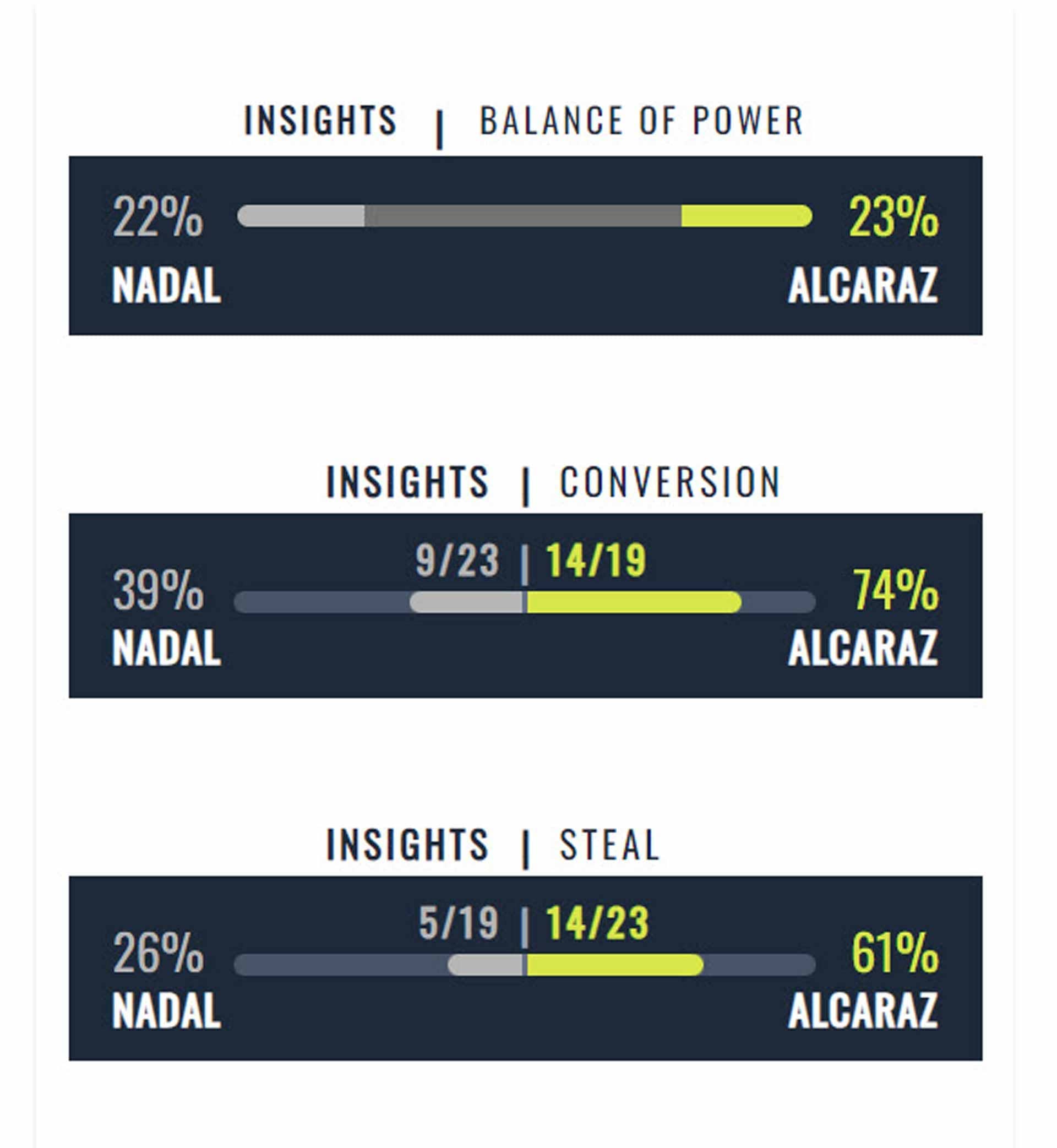 Alcaraz never lost belief he could win despite appearing to struggle physically after his second-set fall. “It affected me a lot," said the Spaniard. "When I lost the second set, I [just] thought that I was able to come back, to do my best, try everything on court, fight until the last ball. It was the key.”

The win takes Alcaraz to his third Masters 1000 semi-final and extends his winning streak against Top 10 opponents to five.