World No. 1 discusses life ahead of bid for 20th Grand Slam title

Editor's Note: ATPTour.com is resurfacing features to bring fans closer to their favourite players during the current suspension in tournament play. This story was originally published on 20 January 2020.

It's midday on Saturday and Rafael Nadal has plenty to keep him busy two days before the start of the Australian Open. For almost an hour, the Spaniard dedicates his time to his tournament press commitments and, when finished, he makes a beeline for Court 23 to take part in an event with the winners of the Rafa Nadal Tour, making use of a clinic his academy is giving.

By now, Nadal has decided to take a breather and cancel the training session he had scheduled at 5pm.

In the morning, the World No. 1 practised for two hours with Dominic Thiem at Melbourne Arena, a short walk from Rod Laver Arena, where he will begin his campaign to equal Roger Federer's Grand Slam haul of 20 majors against Hugo Dellien.

Shortly after 4:30pm, Nadal, in a pink t-shirt and white shorts, takes his racquet bag and gets in the back of a car, in which his co-passengers are Maria Francisca Perelló, his wife since last October, Benito Pérez-Barbadillo, his press secretary, and the journalist he has agreed to give an interview to while he makes his way back to his hotel through the streets of Melbourne.

As always, Nadal is the perfect gentleman in the one-on-one interview. When the vehicle pulls up to the imposing Crown Towers, the World No. 1 asks the driver if it is possible to stay in the car for a moment to finish the interview unhurried.

Put yourself in the shoes of someone who has to buy a present for Rafael Nadal. It sounds like it would be quite a challenge.
This year, I got a Parchís (Ludo) set with the faces of all the people I normally play with: Rafa Maymò's, Carlos Moyà's, my father's and mine etched into the board. I loved that because we're always joking about the Parchís games we play before matches. And I got other gifts too that I liked, like clothes.

Why Parchís?
It's an easy game. It's a game that suits the people in our team well. Normally there are three or four of us, so it's a good game for us. We enjoy it because there is tension throughout, it distracts you and helps you not to think too much before matches. I like having time to warm up and then rest, so I entertain myself with a few games. Also, on days off, or in airports, it helps pass the time as a team, not on your own on your phone or watching series. It's a way of bringing us together.

Do you read often?
I read every day, but not necessarily books.

Press, then?
Yes, of course, I read a lot about what is happening in Spain. These are new times, and the least we can do is read to try and understand all the situations and to have detailed information on everything that’s happening. Yes, I normally read the news every day.

And about yourself?
I read a lot less about me than about the world news in general. I don’t read all the articles that are written about me. Sometimes I am sent one, if it’s particularly harsh, or the opposite, too. So, yes I do like to know who is nice about me and who is not, and I like to understand the reasons why they are nice or not, beyond the article itself. That is, when something negative is written, not just about matches, I try to discover if it is really my fault, or if it is because someone is doing it for a personal reason that I’m unaware of. 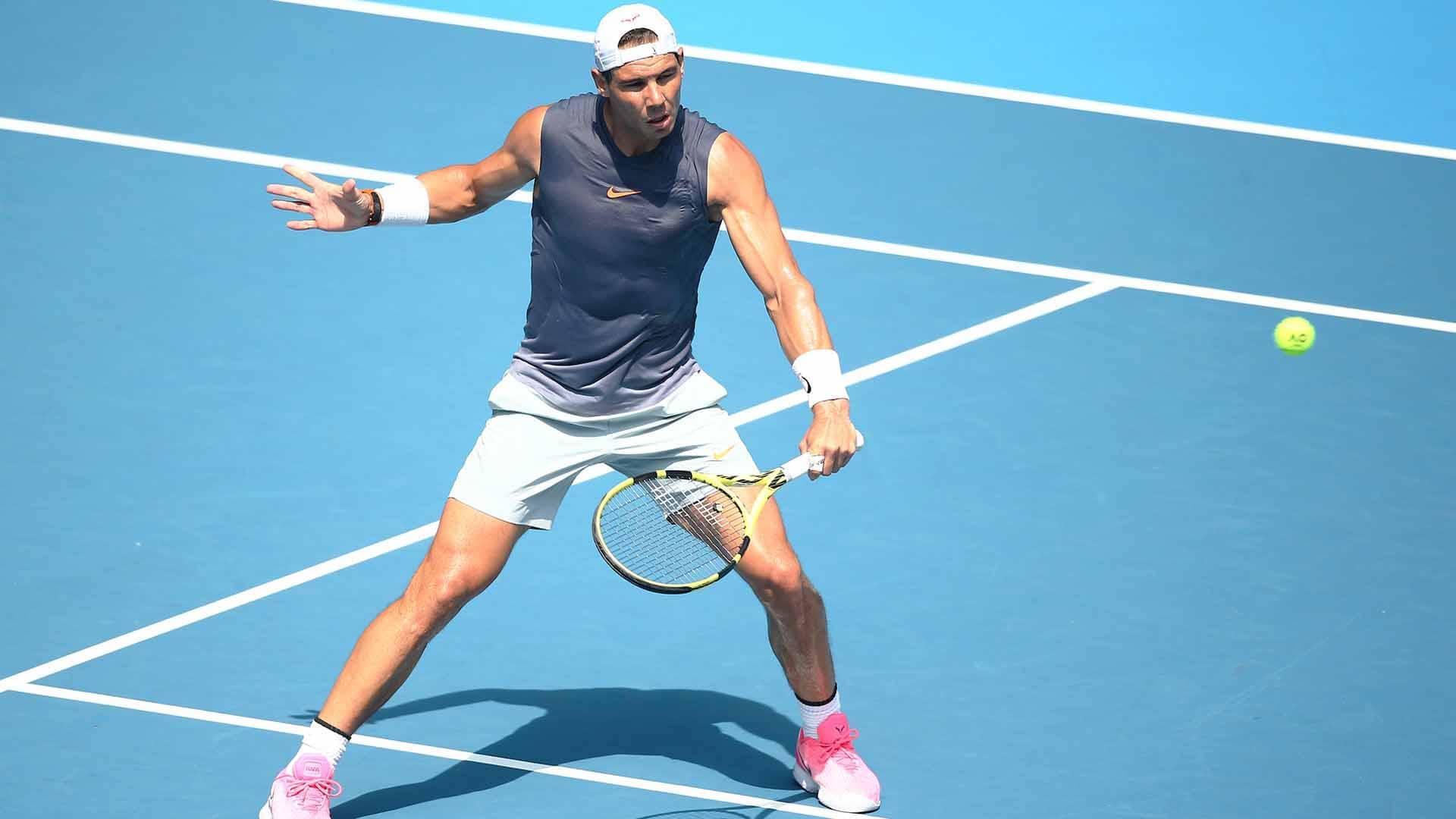 And what do you watch?
I just saw a series that I loved: Greatest Events of WWII in Colour. There are 10 really interesting episodes. We know the story, but seeing it like that, with real images, it helps you realise the magnitude and brutality people experienced at that time. It’s part of our history and it’s important to know about it so that we can try not to repeat it.

“I thought about resting for a season to see if my body would regenerate a little and stop going from one injury to another,” you said early last year. Was the crisis as big as it seemed from the outside?
Crisis... we could call it anything. More than a crisis I would say I had a low point, a difficult point for me. A crisis isn’t playing in two semi-finals, a crisis is other things. In any case, it was relatively short. My real problem started in the quarter-finals at Indian Wells and lasted until halfway through Conde de Godó (Barcelona Open Banc Sabadell). My crisis of energy and enthusiasm only stretched one and a half tournaments. Obviously, my internal crisis started when I injured myself against Khachanov in Indian Wells because it had been a while that I was suffering from one problem after another.

Was it an unfamiliar feeling?
No, because I’ve been injured many times. Although maybe the feeling I had in the match against Leonardo Mayer in the first round of Barcelona was one I’d never had on a tennis court. I can’t remember many like it really.

What were you feeling?
When you have doubts, when you haven’t been able to train for a while... Well, it’s no longer a question of even enjoying it, it’s a question of not being able to train because of too many physical problems and daily pains that don’t allow you to do a person’s normal activities. Always living with problems makes you see everything as black, and you have a slump that’s a little bigger.

Go on.
I was coming off the back of a 2018 with so many problems, although the tennis results were very good. And the first three or four months of 2019, except for the Australian Open, were more of the same. And even during that tournament I had a scare with my abs, a small strain. In Brisbane, I withdrew because of a torn quad, in Acapulco I had the problem with my hand before starting, in Indian Wells the knee problem. And that along with an operation on my foot at the end of 2018, an abdominal tear, withdrawing from the Australian Open, withdrawing from the US Open... You just blow up, of course you do.

“I would like to be remembered as a good person more than a good tennis player,” you said in Perth recently at the ATP Cup.
I think that applies to everyone...

Well, perhaps not.
The reality is simple: You can have all the titles you want, but if you don’t have the capacity to be able to enjoy life with people that you love, and that love you, what does anything else matter? That’s how I see it.

Is that why you say that surpassing Roger Federer’s majors haul wouldn’t make you happier? You have the chance to equal him at this Australian Open.
The thing is that my future happiness doesn’t depend on surpassing Federer. This is the end of the story. I won’t find complete happiness by winning 20 or even 25 Grand Slams. Does it excite me? Of course, it excites me because this is what I do and I want to be as good as possible, but so many good things have happened to me throughout all these years that all I can do is be grateful for life and the people that have helped me.

But you also say that it excites you.
The sport side of things excites me, but I don’t get confused or obsessed. A few months ago, I won the US Open and then we won the Davis Cup with the Spanish team, but here we are again at the Australian Open. Did that make me happy? Of course, it made me happy, but here we are back in Melbourne. What I mean is, life goes on. And if I hadn’t won all of that? Well, possibly we’d still be here, just the same, and we wouldn’t be unhappy.

Victories give you a fleeting happiness, real happiness comes from other things in life. And although we may be experiencing victories or defeats in the world of sport right now, there are more important things in the world than all of that. Of course, in those moments I am affected by playing well, badly, winning or losing. Of course, it affects my current happiness, but not my future happiness... I can assure you it doesn’t. 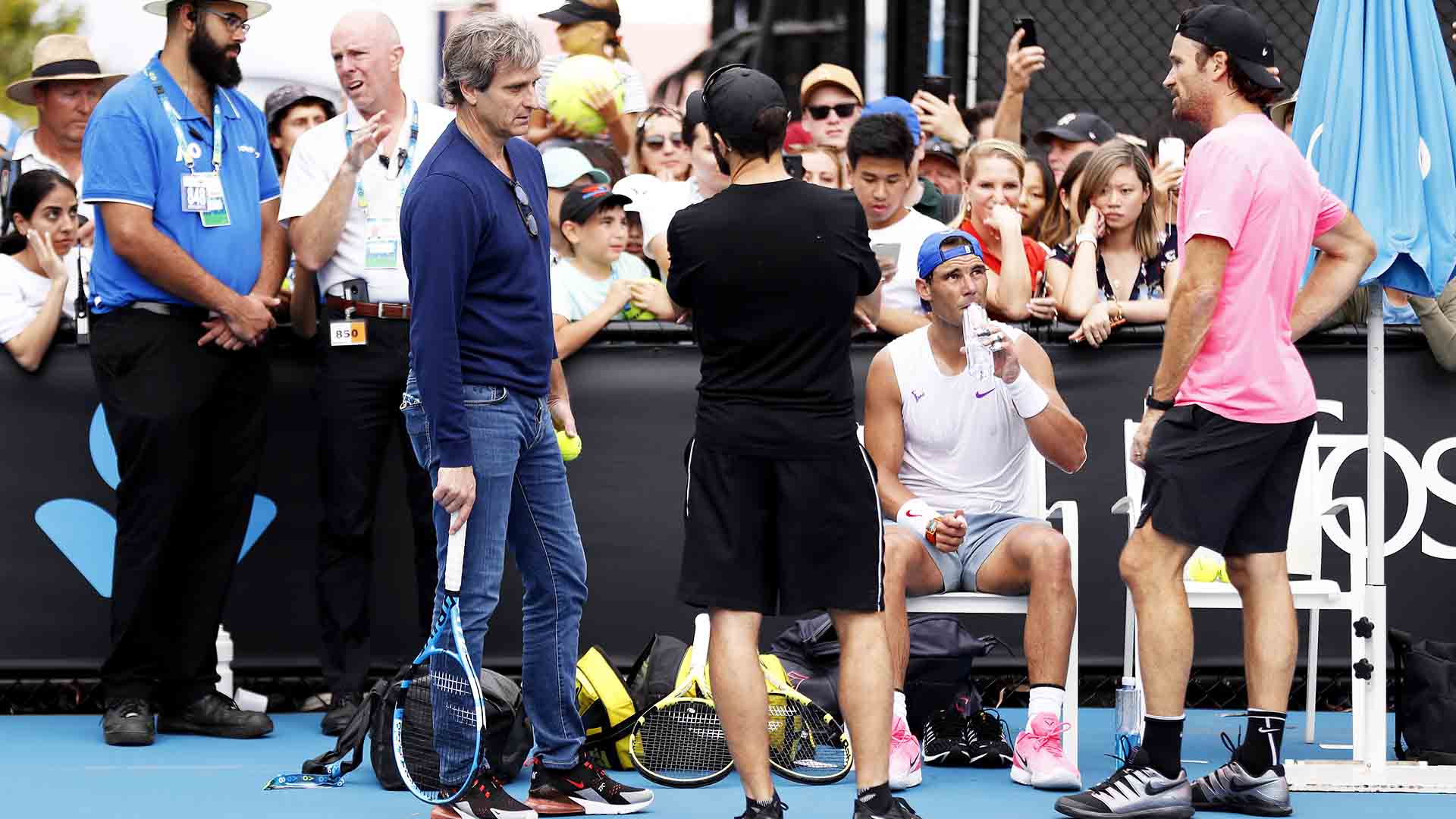 Can you compare the happiness of winning with going to spend a weekend on a boat and diving or fishing?
Everything is comparable in this life, but they are different situations and different moments of happiness. As much as someone might believe that winning gives you that special happiness, there is also suffering, stress and worry in competition. When you combine all those feelings, of course there is a point of great personal satisfaction when you achieve something. But happiness is the personal satisfaction that you have worked to get there. The happiness you get from achieving that moment is perhaps greater when you are on the boat with your family or friends.

At the end of the day, you are having a relaxing time and it’s a more comfortable happiness, for want of a better expression. The other type is a less comfortable happiness. Other things, if I’m lucky, I will have a lot of time to do them. So far, the personal satisfaction that you get from knowing that you’re going to leave the Tour having done things as well as possible, having been close to your limit, I think that that could give you future happiness.

Would you like to be a father soon?
I love children and I would like to form part of a family, and at the age we are now we’re not going to wait five years.

There is one thing that may come quicker; the expansion of the Rafa Nadal Academy, which is already a reality.
It means a lot to me, but also a lot more to all the people that train there. There are days when it rains in Mallorca, days when those that work hard to improve their game as much as possible can’t train in the conditions they deserve to. With the new courts, especially the indoor ones, we make a significant leap in quality, and the service we’re going to provide the customers is much better because things can be planned. When it comes to hosting events for example, it’s a great help because we know that they can go ahead, whatever happens.

And we have the opportunity to host events that are important to the island. We were looking to keep up with what a leading sports centre needs. Without the expansion we would fall behind. Now we can say that we are on the path to being a leader in tennis and also in sport. And I’m also happy because in some way the people from all over the world that come frequently can enjoy the facilities even more. On a local level too, it will generate more jobs. There are more than 300 direct jobs today, and with the expansion, that number will increase. It’s beautiful for me to have so many people from Mallorca working in a centre like that.