Rafael Nadal celebrates with his second Australian Open trophy on Monday one day after defeating Daniil Medvedev in five sets for the title.

Rafael Nadal defeated World No. 2 Daniil Medvedev in the Australian Open final for his second title at the season's first major.

ATPTour.com looks at five fun facts from the Spaniard's victory Down Under.

It Was Nadal's Record-Breaking 21st Major Title
Nadal broke a tie with Novak Djokovic and Roger Federer for the most men's singles major titles in history. Djokovic and Federer are tied in second place with two. This is the first time Nadal has had more Grand Slam titles than Federer.

The Spaniard won his first major trophy at Roland Garros in 2005. He has captured 13 Roland Garros crowns, four US Open titles and two victories each at the Australian Open and Wimbledon.

Rafa Completed His Second Career Grand Slam
Nadal is just the fourth man in history to win all four major titles multiple times. The lefty joined Roy Emerson, Rod Laver and Djokovic in the elite group. Only Nadal and Djokovic have accomplished the feat in the Open Era.

Separately, Nadal became only one of three men aged 35 or older who have won the Australian Open, joining Federer and Rosewall.

It Was His First Two-Set Comeback In More Than 14 Years
When the 35-year-old fell two sets behind Medvedev, a comeback seemed a daunting challenge. Nadal had not rallied from two sets down in more than 14 years.

Before Sunday, the Spaniard had only done that three times. His most recent two-set comeback was at Wimbledon in 2007 against Mikhail Youzhny. He also did it at Wimbledon in 2006 against Robert Kendrick and in the 2005 Mutua Madrid Open final against Ivan Ljubicic. 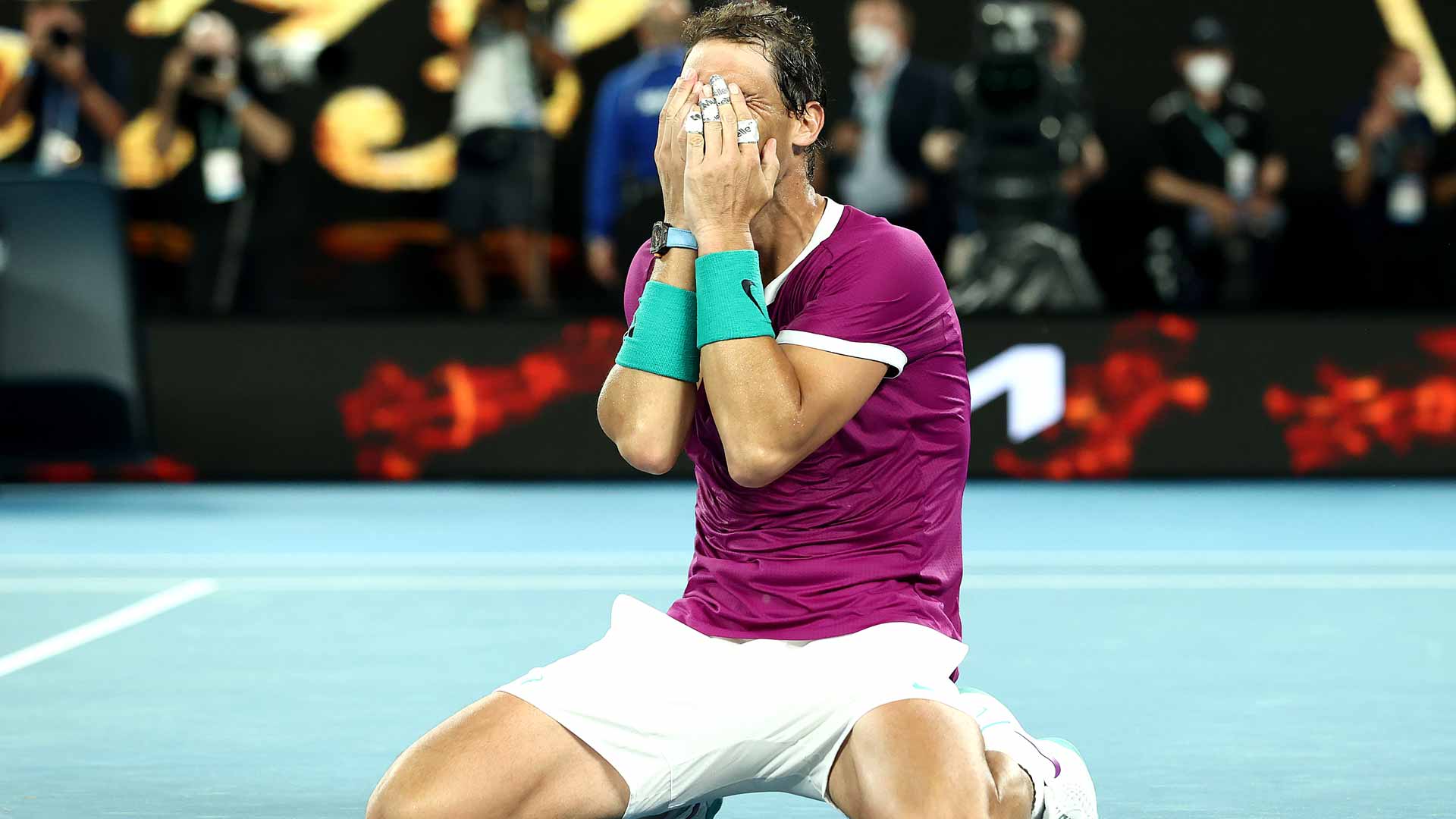 Photo Credit: Mark Metcalfe/Getty Images
Nadal Has Won Multiple Titles For 18 Consecutive Years
Rafa moved to 10-0 on the 2022 season on Sunday with triumphs at the Melbourne Summer Set and the Australian Open. With those two trophies, he has earned at least two tour-level crowns in 18 consecutive seasons.

Overall, Nadal has lifted 90 tour-level titles in his storied career. The only men who have claimed more in the Open Era are Jimmy Connors (109), Federer (103) and Ivan Lendl (94).

He Has Won Two Five-Setters Against Medvedev In Major Finals
This was not the first time Nadal has clawed past Medvedev in a major final. In the 2019 US Open championship match, the lefty let slip a two-set advantage before steadying himself in the fifth set to capture the crown.

Nadal leads Medvedev 4-1 in their ATP Head2Head series, with all five of their clashes coming on the biggest stages in the sport. Two were in major finals, two at the Nitto ATP Finals, and their first meeting was in the final at the 2019 ATP Masters 1000 event in Canada.