ATP Staff
This article contains:
Spanish superstar to meet Dimitrov in third round

Rafael Nadal got off to a perfect start on Wednesday in Monte-Carlo, where he seeks a record-extending 12th trophy. The Spanish superstar looked in strong form in a comprehensive 6-1, 6-2 victory over Argentine qualifier Federico Delbonis over 81 minutes at the Rolex Monte-Carlo Masters.

In his first match since 17 February, when he fell to Stefanos Tsitsipas in the Australian Open quarter-finals, Nadal struck 16 winners to beat Delbonis. The 34-year-old Nadal is now 72-5 at the Monte-Carlo Country Club, where he won an Open-Era record eight successive titles from 2005 to 2012 and a further three straight crowns from 2016 to 2018.

“It was solid match," said Nadal. "Of course, a very positive result. He's a good player on clay... Nothing unbelievable, but nothing wrong. Just a solid match, a positive start. I think I did what I had to do today."


Nadal will next play Monte-Carlo resident and No. 14 seed, Grigor Dimitrov, who saved six of seven break points in a 7-6(3), 6-4 victory over Jeremy Chardy of France in one hour and 42 minutes earlier on Wednesday afternoon. Nadal leads Dimitrov 13-1 in their ATP Head2Head series, including wins in their three matches at this clay-court tournament (2013, 2018-19).

"We've had some great matches," said Nadal. "In Melbourne, of course... We played another great match in Beijing, another one in Shanghai. He's a good friend, a good guy, and a great player. It's going to be a tough test in my second round. It's going to be his third. I need to be ready for it. I hope to be ready for it. I am just excited to play a tough match very early in the tournament." 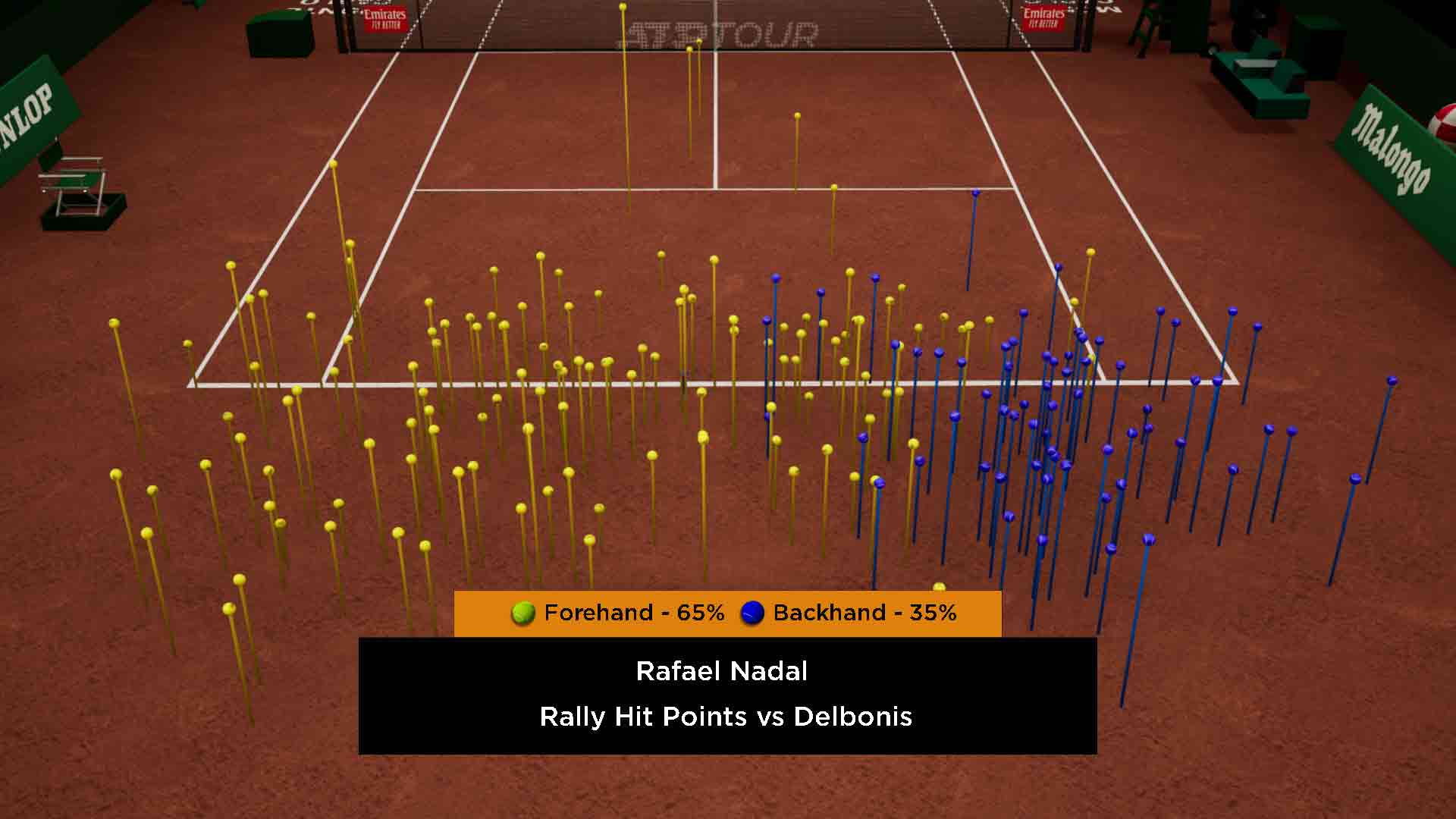 Third seed Nadal, who is normally used to competing in front of a capacity 10,200 fans on Court Rainier III each year, started with a bang, breaking Delbonis in his first service game after a backhand error. The World No. 87 continued to come under pressure, forced deep behind the baseline in bruising baseline rallies. Consecutive double faults from Delbonis handed Nadal a 4-0 advantage. Nadal completed the 30-minute first set with a forehand.

There was no let-up from Nadal in the early stages of the second set. The Spaniard won 10 of 12 points en route to a 3-0 lead, but his dominance was halted in the next game. Delbonis broke serve on his fourth break point, when a Nadal backhand hit the net and bounced wide, and went on to recover to 2-3. As groundstroke errors continued to mount for Delbonis, Nadal broke for a fifth time at 4-2. He is now 5-0 lifetime against Delbonis in their ATP Head2Head series.

Delbonis, 30, had been seeking to record the biggest win of his career since overcoming then No. 2-ranked Andy Murray at the 2016 BNP Paribas Open in Indian Wells. He is now 3-16 lifetime against Top 10 opponents.